Emblazoned on the wall in the tunnel that ushered forth CrossFit Games athletes at the StubHub Center for the better part of a decade are words attributed to the “Wizard of Westwood.” John Wooden, one of the greatest and most iconic coaches of any sport in history, seemed to innately understand our community when he said, “Sports don't build character; they reveal it.” Longtime competitor Emily Bridgers exemplified this and the teachings of CrossFit in an interview in Madison, Wisconsin, moments after realizing her final CrossFit Games appearance was cut short by a devastating injury. 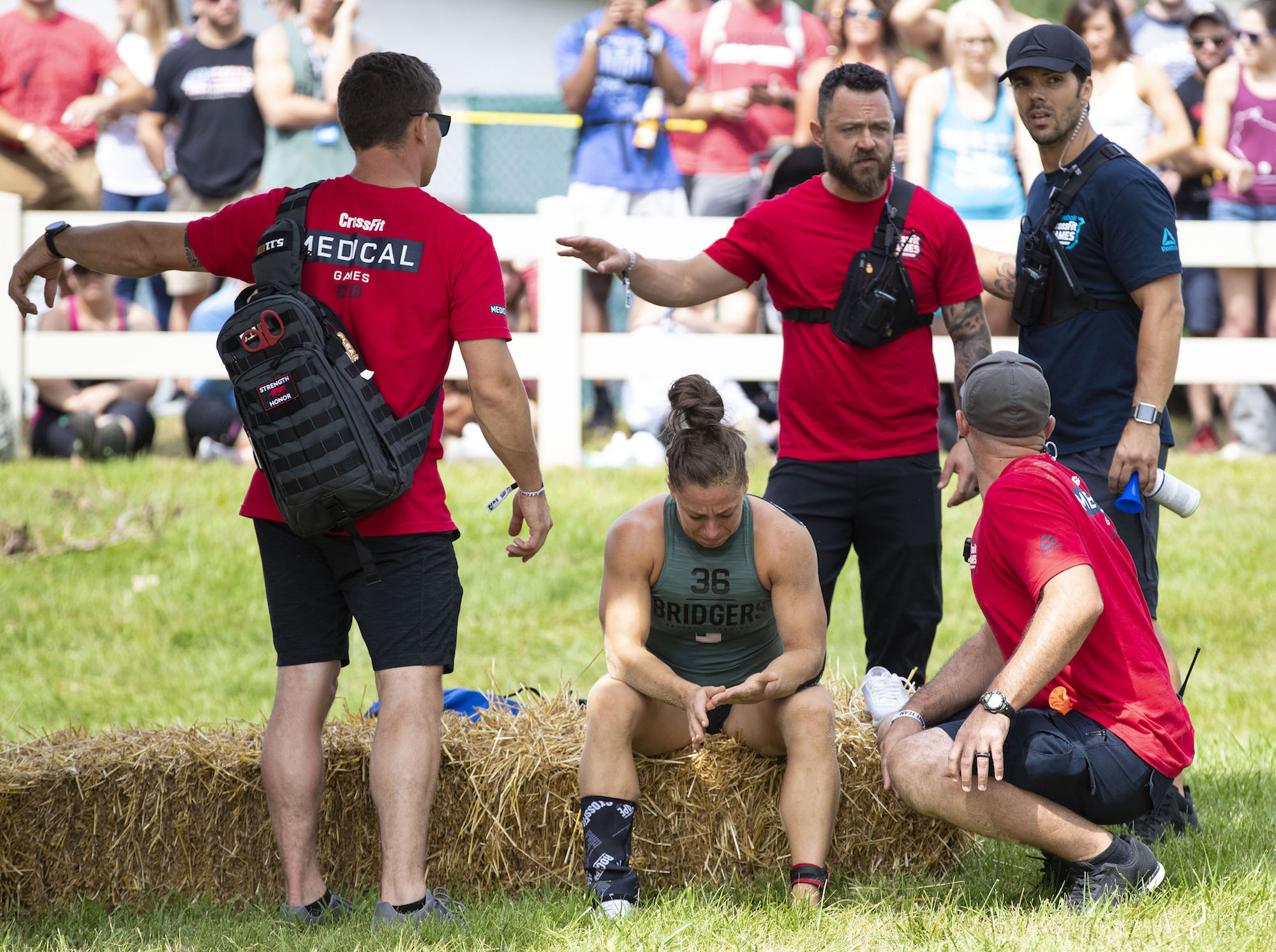 The injury happened during Event 5 of the 2018 Reebok CrossFit Games, “The Battleground” (named in part after its sponsorship by the U.S. Marine Corps), and ended Bridgers' impressive competitive CrossFit career. She had announced earlier in the season that her fifth trip to the Games would be her last—not because she had lost the desire to compete and train but rather because life and CrossFit had provided her a new perspective.

Before discovering CrossFit at the University of Georgia, Bridgers was a member of Georgia’s gymnastics team. After a back injury derailed her collegiate career, CrossFit provided an outlet for her to train and help others achieve their goals. At the age of 26, she opened the doors to her own CrossFit affiliate in Atlanta: CrossFit Terminus.

Bridgers qualified for the CrossFit Games in 2014 and placed sixth. New levels of recognition ensued, and sponsors flocked to support. The community rallied behind Bridgers, and she became a staple at the South East and Atlantic Regional competitions, claiming three individual titles in three years.

Bridgers admitted early in her career she could not understand those athletes who claimed they wanted to simply “try (their) best and have fun.”

Despite her tremendous accomplishments on the competition floor, it was in her last act at the CrossFit Games, far from the podium and in one of her final interviews, that she secured a legacy that will serve many more in our community than her already-impressive career highlights ever could.

When asked what she would do next, without hesitation Bridgers responded, “I have an affiliate to focus on. I want to start a family.”

She added: “At some point, you have to let go of ‘My life is winning the Games.’”

Many among those of us who train at CrossFit affiliates believe that the old saying that “too much of anything is a bad thing” is a fallacy. Despite the teachings of CrossFit HQ staff and leaders in our community, we watch the examples of elite athletes and subconsciously reason that if one hour of training is good, three hours must be better. If eating clean is good, going all in and supplementing with protein, creatine and products from every official sponsor from the Games is better. And better still? If $20 worth of grungy workout gear is good enough, then $300 worth of brand new Reebok Nanos, Lululemon shorts and all the straps and wraps we can affix to our appendages is better. (Note: No shirt necessary. That’s for the moderately committed.)

I know these things because I have lived them. Like many of those with whom I have trained over the years and served beside on active duty as a Marine Corps officer, I have watched as my incessant drive for achievement in the gym and in life destroys relationships and provides little in the way of improving the wellness I had learned at the CrossFit Level 1 Course. I focused on flashy personal achievements rather than using my talents to benefit the community and those around me. I have struggled in the moment to recognize the profound teachings of CrossFit Founder Greg Glassman and others.

In the CrossFit Journal article “Virtuosity” in 2005, long before the CrossFit Games served as the definitive test of fitness, Glassman warned of these potential excesses. We have a natural tendency to concentrate our attention on the “advanced and fancy movements” on display during high-profile CrossFit competitions or in gym programming. But this might not be where our efforts should be concentrated. Such a focus doesn't allow us to produce the best versions of ourselves. Or, in the words of Glassman, giving in to that natural tendency is “a sucker’s move.”

There are undoubtedly wonderful people in the CrossFit community who believe winning the CrossFit Games would provide validation. The short-term perks are definitely appealing. After all, who doesn't want to train or ride motorcycles alongside the Good Dudes, Inc. (Rich Froning, Josh Bridges or Dan Bailey), wear boxes of free Reebok gear, be part of #OpenHumiliation with Brent Fikowski or travel the world with the Dottirs?

But how many top athletes would truly tell us their measure of purpose in life is “winning the Games”? I would argue very few. Bridgers would have disagreed with that statement during her first year or two of competing in CrossFit competitions, but in an interview with The Atlantic Journal-Constitution in the weeks leading up to the 2018 Reebok CrossFit Games, she explained that her favorite thing about her CrossFit experience was the chance to have a “positive impact on (someone’s) life.”

While the Games are an exciting spectacle, like most CrossFit community members, Glassman has put his efforts into building a company that focuses on the health and longevity of people around the world. Even longtime CrossFit commentator Pat Sherwood announced he would join the new CrossFit Health initiative. And this may shock you, but I'd be willing to bet that less money is spent trying to promote Mat Fraser than helping the community live longer and healthier lives.

None of this is to say that CrossFit competitors are not inspiring. The tremendous feats accomplished by athletes at the Games and even local competitions demonstrate to our community the human body's awesome abilities. Evidence of improved fitness and wellness inside our community abounds, and we are extremely grateful to those athletes who have made it their mission to be the most competitive athletes in CrossFit.

As Bridgers gained perspective, she recognized life was bigger than the test of fitness. Training six hours per day was a mentally and physically grueling routine, leaving little time for extracurriculars. We marvel at the accomplishments of our favorite athletes during Regionals and the Games. We ignore the tremendous sacrifices these impressive members of our community make.

What we also do not see is where these athletes have placed their energies outside their personal workouts and competition preparation. Look at how many of our favorite athletes have established businesses, written books and given back to the community in many different ways. This is because they have not made standing atop the podium their only goal. Their training is intense and deliberate, but it is moderated by long-term goals.

That is why time and time again we see our athletes stumble and fall with injuries but dust themselves off and prepare for an optimistic interview with CrossFit Media staff. Rarely do CrossFit athletes sulk or fear the future. They have lived the values they believe, and while training extremely hard, they have maintained the balance required for a healthier existence.

Those among us who lose ourselves training in our boxes should heed Bridgers' lesson. In a moment that might have devastated a similar athlete in a different sport, Bridgers instead saved her most memorable performance for her final act. After all, CrossFit—and especially the Games—did not build Bridgers' character. As Coach Wooden would attest, it only revealed it.

Update for everyone: I dislocated my ankle earlier and most likely tore some ligaments. I was dropping from the rope wall on the obstacle course and just took a bad landing in the sand. Next thing I knew my ankle was facing the wrong direction. It popped back in, then out again, and back in. This brings my @crossfitgames career to an abrupt end, which is sad, but I’m okay! I wasn’t planning on being a spectator this weekend, but I will try to make the most of it. Thank you so much to all the fans and everyone who has supported me over the years. It’s been an amazing ride!

Biography: Chris Davis is an active-duty Marine Corps Captain currently on orders to attend law school at the University of Tennessee. The views reflected above are his own and do not represent the Department of Defense.