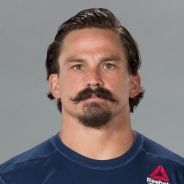 Known for his Hulk-like victory scream, Josh Bridges is a four-time CrossFit Games veteran and a CrossFit athlete since 2005. A former collegiate wrestler and U.S. Navy Seal, Bridges has won three of the five regional competitions he’s competed in and finished on or near the podium in three out of his four Games appearances, with a career best finish of second in 2011. Though Bridges devastated fans when he failed to qualify for the 2015 Reebok CrossFit Games, he made his comeback in 2016 after retiring from the military, taking a 13th-place finish as the oldest—and at five-foot-five, shortest—individual male at the Games that year. He was 33.