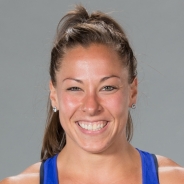 Emily Bridgers, a four-time CrossFit Games veteran (three individual, one team) has been a consistently high-performing CrossFit athlete since 2011. She finished in the top 10 in her first three appearances at the South East Regional (2011-2013) and has won every South East and Atlantic Regional since, in addition to finishing in the top 10 worldwide in the Open each year since 2012. In 2013, she helped team CrossFit RX to a 28th-place finish at the Games and then competed as an individual every year thereafter, with a CrossFit Games career-best finish of sixth in 2014. In addition to her CrossFit Games accomplishments, she also took second in the 2015 CrossFit Liftoff weightlifting competition with a 180-lb. snatch and a 215-lb. clean and jerk. A former collegiate gymnast, Bridgers owns CrossFit Terminus in Atlanta, Georgia.