The first week of the 2022 CrossFit Games Semifinals kicked off in three regions: Oceania, Europe, and North America.

Check out highlights from the first three competitions of Semifinals.

The 2022 Torian Pro kicked off with the traditional “Welcome to Country” dance to acknowlege the cultural significance of the tribes in surrounding areas, who are recognized as traditional owners of the land.

Day 1 ended with six teams neck and neck, each vying for one of the three podium positions.

For the individuals, it was no surprise to see Tia-Clair Toomey sweep the first two events of the competition. Toomey performed both sets of 15 muscle-ups in Event 1 unbroken and lapped her competitors in the seventh round of Event 2.

It was assumed that former Australian Ninja Warrior contestant James Newbury would lead in Event 2, a repeat of a 2014 CrossFit Regional event featuring legless rope climbs — lots of them. Newbury posted the second-best time in the world back then and this weekend beat his previous record, finishing in a time of 3:00.89, good for fourth place. 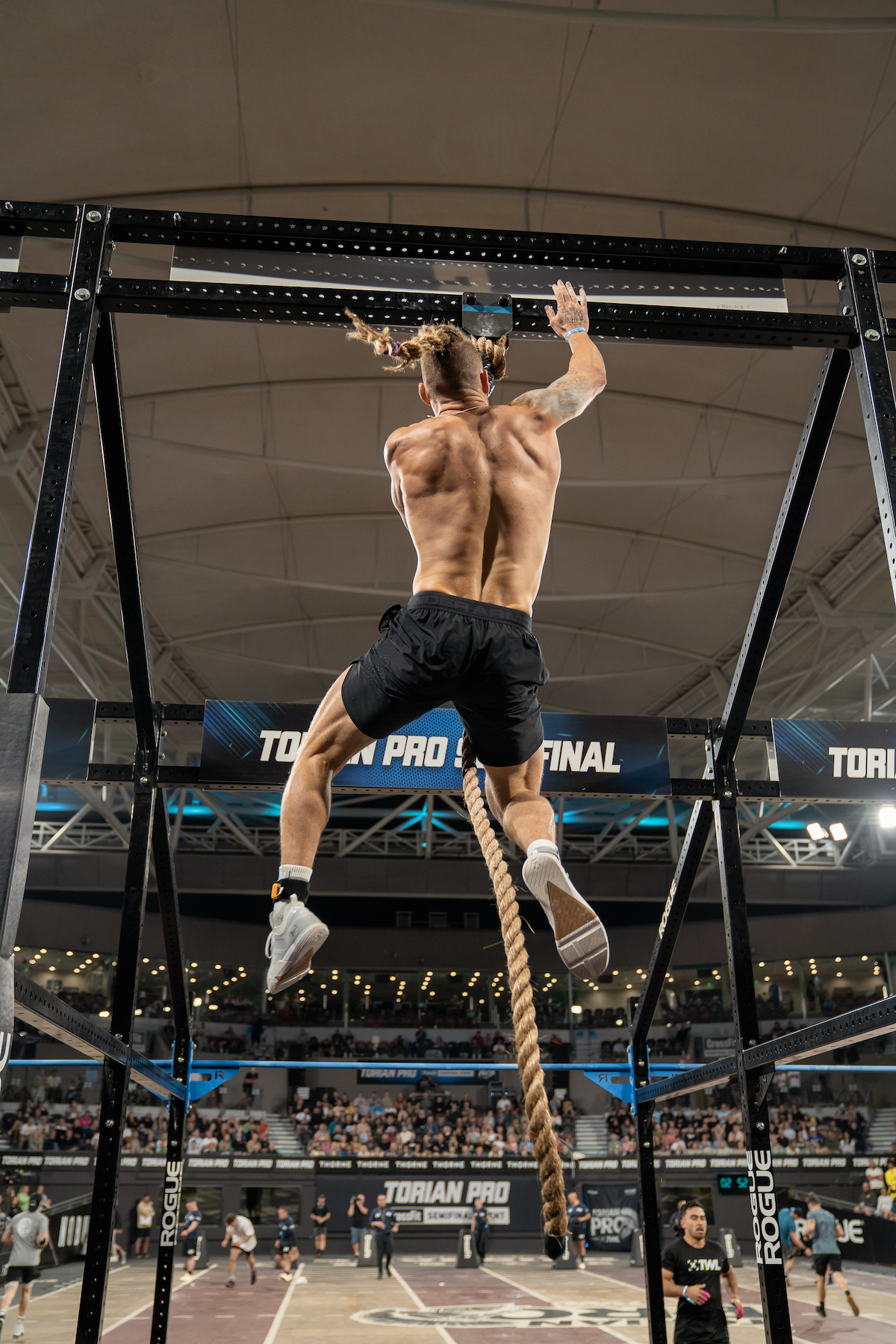 The Pat Rafter Arena was filled with pink on the second day of the Torian Pro in support of the Small Steps 4 Hannah. The charity honors the life of Hannah Clarke, a former CrossFit athlete who lost her life to domestic and family violence.

CrossFit Urban Energy led the teams on Day 2, dominating Event 3, an event very few teams finished under the time cap. The team went on to win Event 4, lifting a combined total of 895 lb. CrossFit Light member Kate Gordon played her own hype woman, leading the crowd in a few rounds of “stomp, stomp, clap” before stepping up to the bar and snatching a cool 190 lb. She tied Annika Roberts of Plus64 CrossFit Onyx for the heaviest successful snatch of all women in the team division.

Strategy is everything in this stage of competition. In Event 3 — a barbell complex consisting of three cleans, two front squats, and one jerk — Kara Saunders and Toomey continued to glance at each other’s weight cards, knowing they needed to outlift each other to take the win. Toomey loaded 250 lb on her bar, but after observing Saunders load 245 and fail her lift, Toomey took off the extra five pounds and won with a successful 245-lb lift.

Nearing the end of Event 4 in the men’s third heat, most of the athletes were cranking out their final sets of chest-to-bar pull-ups with swift butterfly kips. However, on the left side of the rig was an athlete completing his reps strict. Three-time Regional athlete Mason Doherty suffered from an injury prior to the event, keeping him from kipping after his first two rounds, but he was able to finish his 60 snatches within the third round in 10:03.44.

“I’m so glad that I don’t have to go again,” Doherty said. 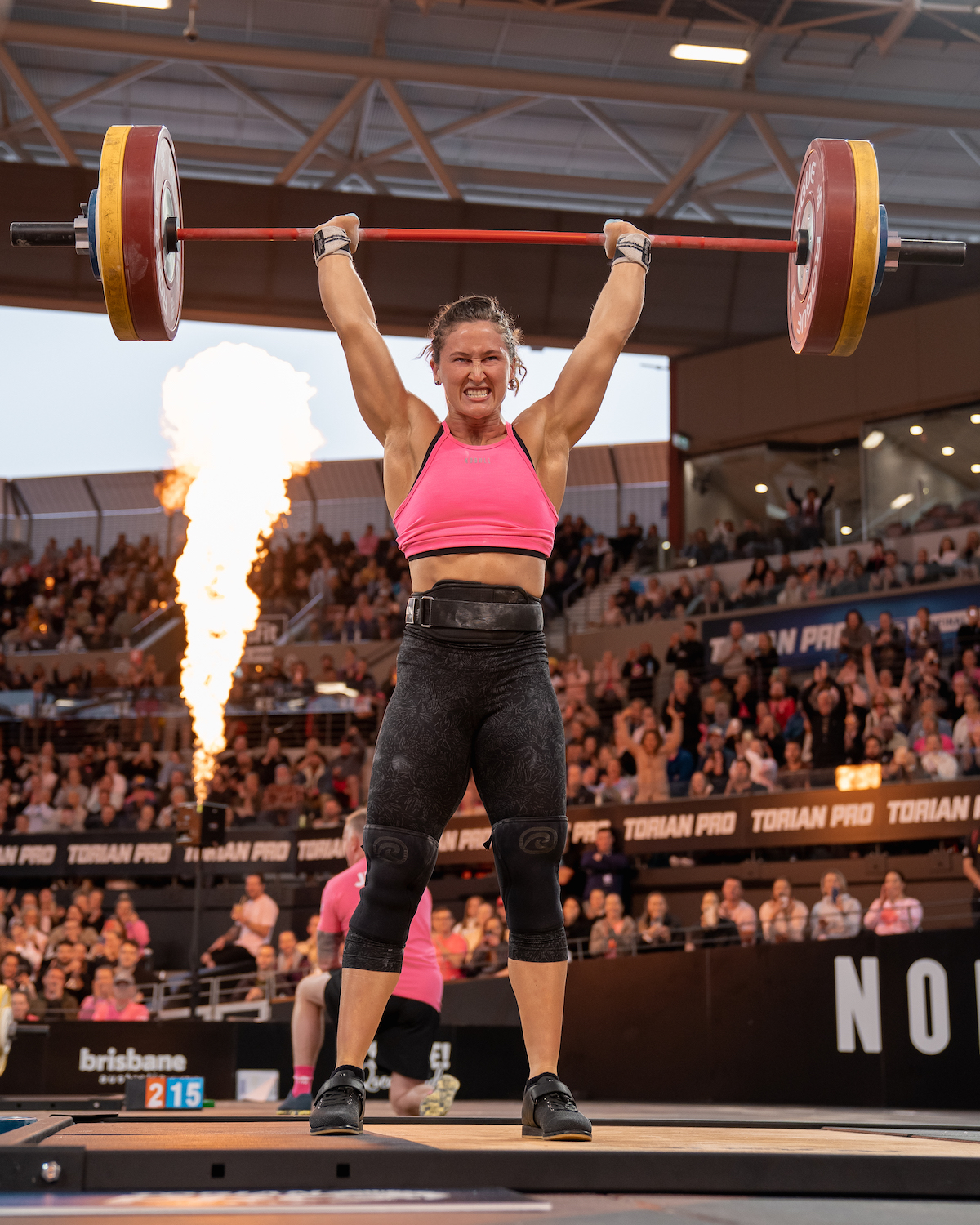 Before the individual athletes began to line up for the final event of the 2022 Torian Pro, the haka dance was performed to give athletes a final push to the end.

Standing at the top of the podium for the team division was CrossFit Urban Energy, a team made up of two married couples. They never dropped below third in any event.

Heading into Day 3, team CrossFit EXF was settled into second place, but after a ninth-place finish in Event 5, the pressure was on if they were to secure one of the top three spots. The team clearly does well under pressure. CrossFit EXF crossed the finish line during Event 6 in 20:28.87, securing first place in the event and the last Games-qualifying spot at the Torian Pro.

After an extraordinary performance this weekend, the five-time Fittest Woman on Earth continues to leave the competition floor with nothing but shock and awe in her wake. Toomey swept all six events, a rare feat within the individual division.

Ricky Garard and Jay Crouch tussled for the top spot on the leaderboard throughout all three days of competition. However, Crouch emerged victorious after first- and fourth-place finishes to Garard’s fifth and third in the final two events. 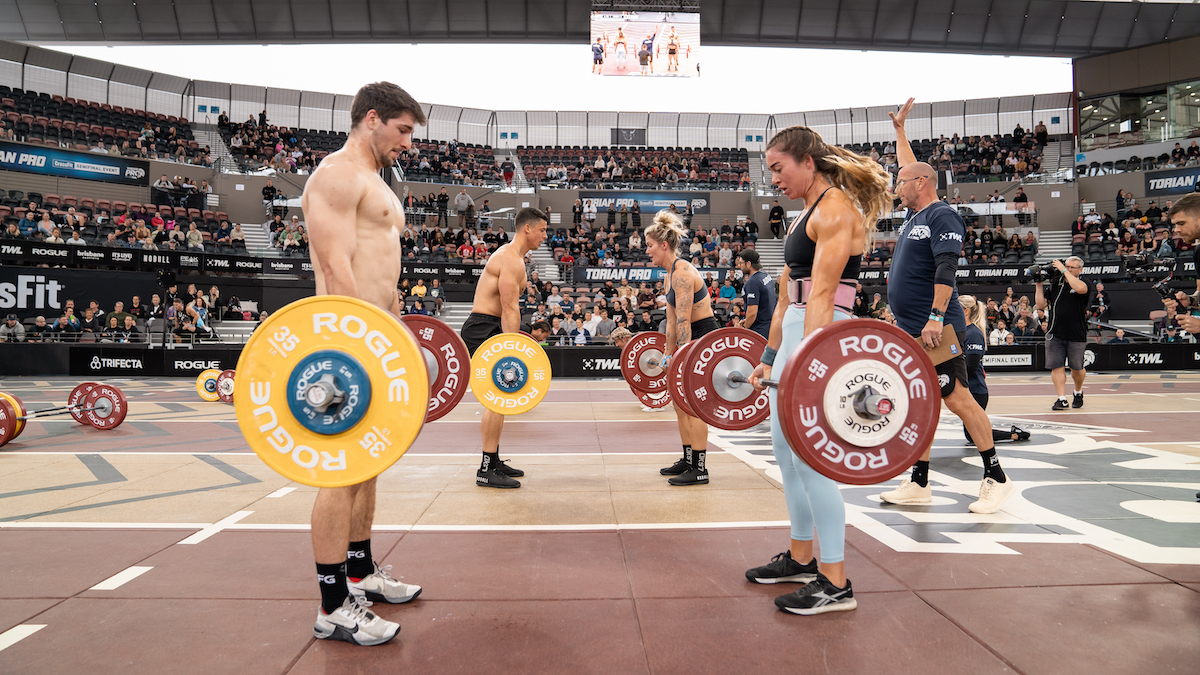 In true CrossFit Mayhem Freedom fashion, the team won the first two events of the Syndicate Crown. It was the only team to have all four athletes clear the snatch ladder and hit the bonus bar at 285/185 lb in Event 1. However, it was Blues City CrossFit’s Stephen Wallace who hit the heaviest snatch of the day at 305 lb. Wallace has a history of outdoing the field with his remarkable strength, clean and jerking the third-heaviest weight in CrossFit competition history last year at the West Coast Classic and also squatting the heaviest four-rep-max front squat during the 2021 Individual Quarterfinal.

On the women’s side, 18-year-old Paulina Haro from Brazil hit 245 lb in Event 1 — Barbell Complex — to tie for first with Christine Kolenbrander. Heading into Event 2, Haley Adams needed a good performance to make up for her 23rd-place finish in Event 1. She won the event in 10:49.14.

For the men, Jayson Hopper is jumping to the top of the leaderboard again this year after his breakout year at the 2021 Semifinals. Hopper took second in Event 2 and finished out the day in second place on the leaderboard. 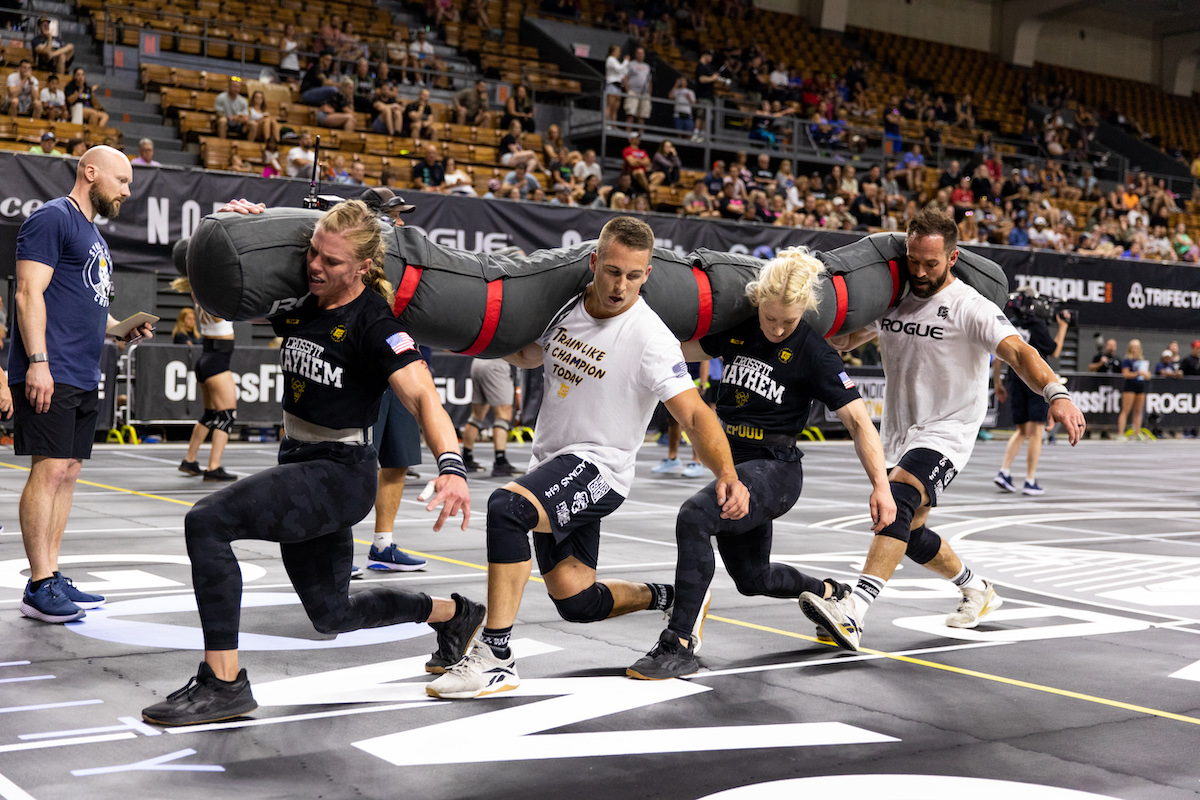 Mayhem Freedom is a household name for the Affiliate Cup, but now, several other Mayhem teams are beginning to make a name for themselves, proving Rich Froning’s affiliate can produce extraordinary athletes. Team Mayhem Justice finished Event 3 in second overall, bumping up its position on the leaderboard. The team finished the day in third.

2021 Fittest Man on Earth Justin Medeiros won his first event of the weekend in Event 4, finishing in 21:48.39. James Sprague and Jayson Hopper had a photo finish in the event, but Sprague edged out Hopper by a tenth of a second, good for sixth overall. 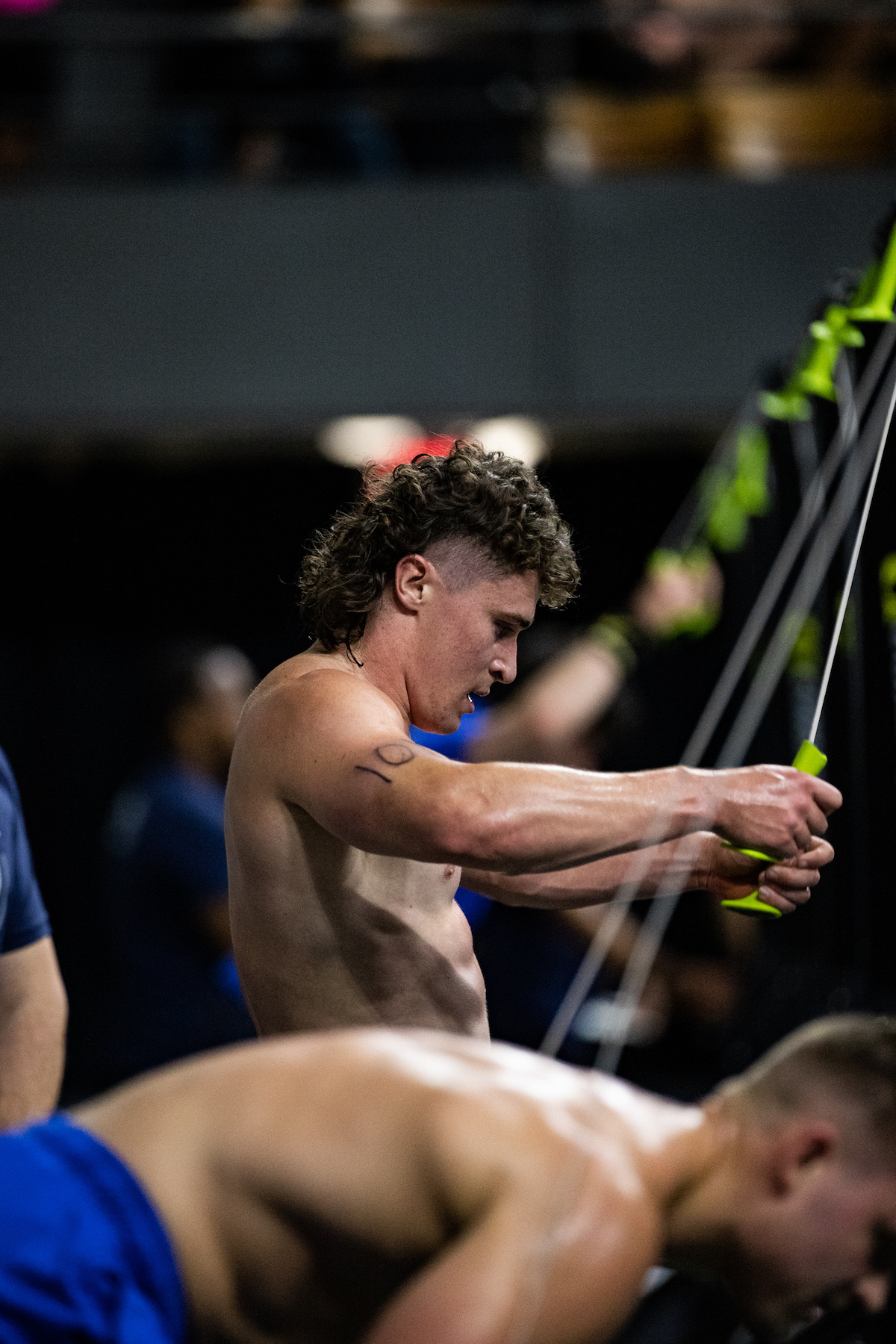 After five events for the team division, only five points separated third place from sixth. Heading into the finale, team Mayhem Freedom sat comfortably in first, preparing to take a clean sweep of every event from the weekend.

However, two teams were neck and neck for the fifth and final Games-qualifying spot. It was a close race between team TTT and Mayhem Justice. At the start, the men of team TTT took the lead, but once the women of Mayhem Justice took the floor, the team overtook TTT, securing the last ticket to the 2022 CrossFit Games.

Haley Adams and Alexis Raptis were separated by only two points heading into the final event. Whoever finished ahead in Event 6 would become the Syndicate Crown champion. The women were neck and neck, but Adams was able to speed across the finish line less than a second ahead of Raptis, securing third place in the event and first overall.

When the individual men lined up for Event 6, Will Moorad was 59 points behind a Games-qualifying position. But that didn’t stop him from achieving one of the greatest comebacks in this stage of competition. Moorad finished the final event first in 5:43.29, jumping to fifth on the leaderboard, a ticket to the 2022 NOBULL CrossFit Games in hand. 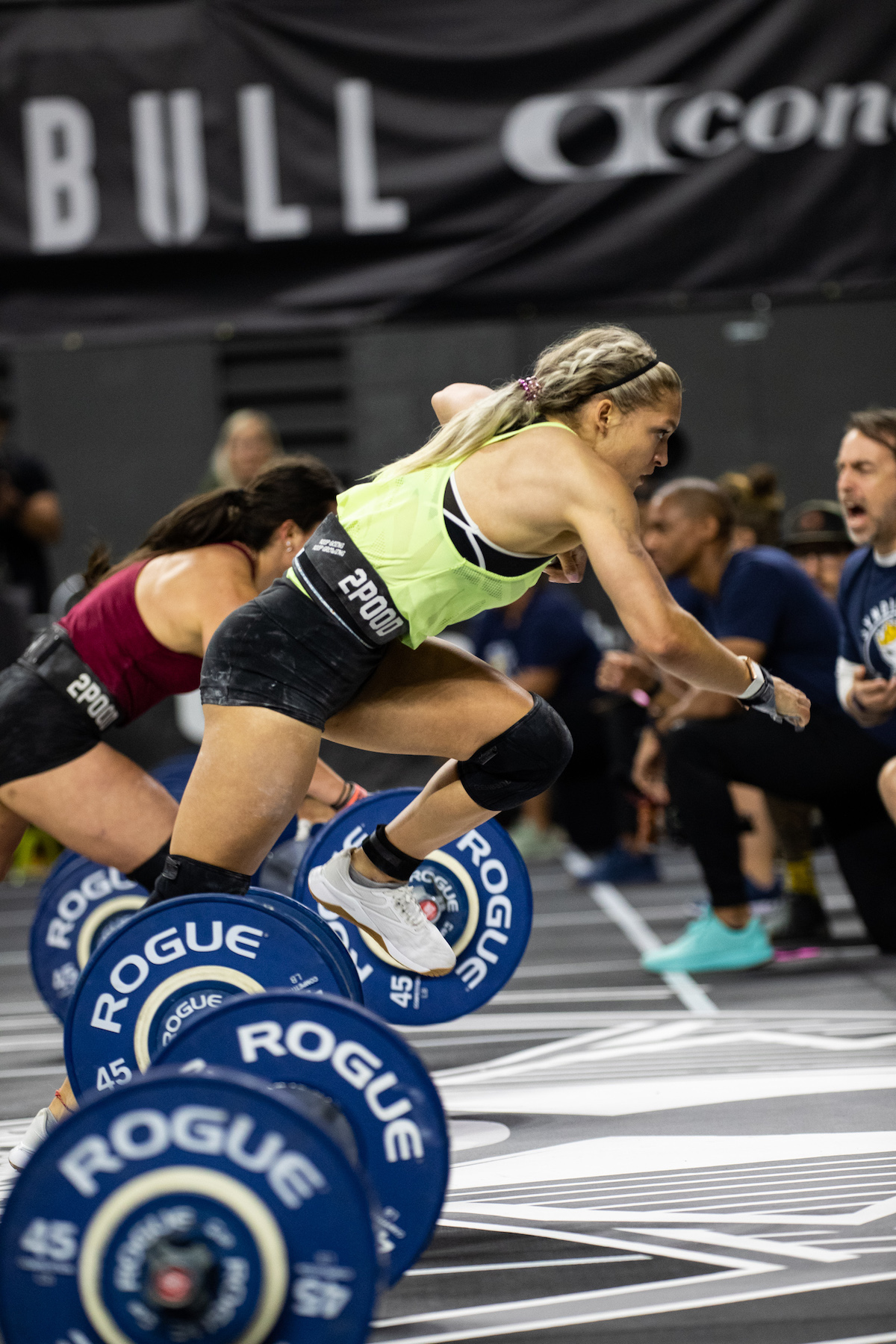 Team Event 2 was one for the books, with CrossFit Reykjavík bringing spectators to the edges of their seats. Teams had to complete a 5,000-m row with a 42-m sandbag carry at every five-minute increment. During almost the entirety of the row, Annie Thorisdottir stunned the crowd with a split rate of 1:27. Her teammate, Khan Porter, sprinted to the finish with a 1:16 split, pushing the team to first place at the end of Day 1.

The first individual event saw multiple men finish under Rory Boyden's record time of 3:29 from the 2014 CrossFit Regionals. Michael Smith sped through the event with a blazing time of 2:51.63, but in the final heat, Lazar Đukić beat Smith by a hair, securing the event win with a time of 2:50.59 and setting the tone for the competition, which he led all weekend long. 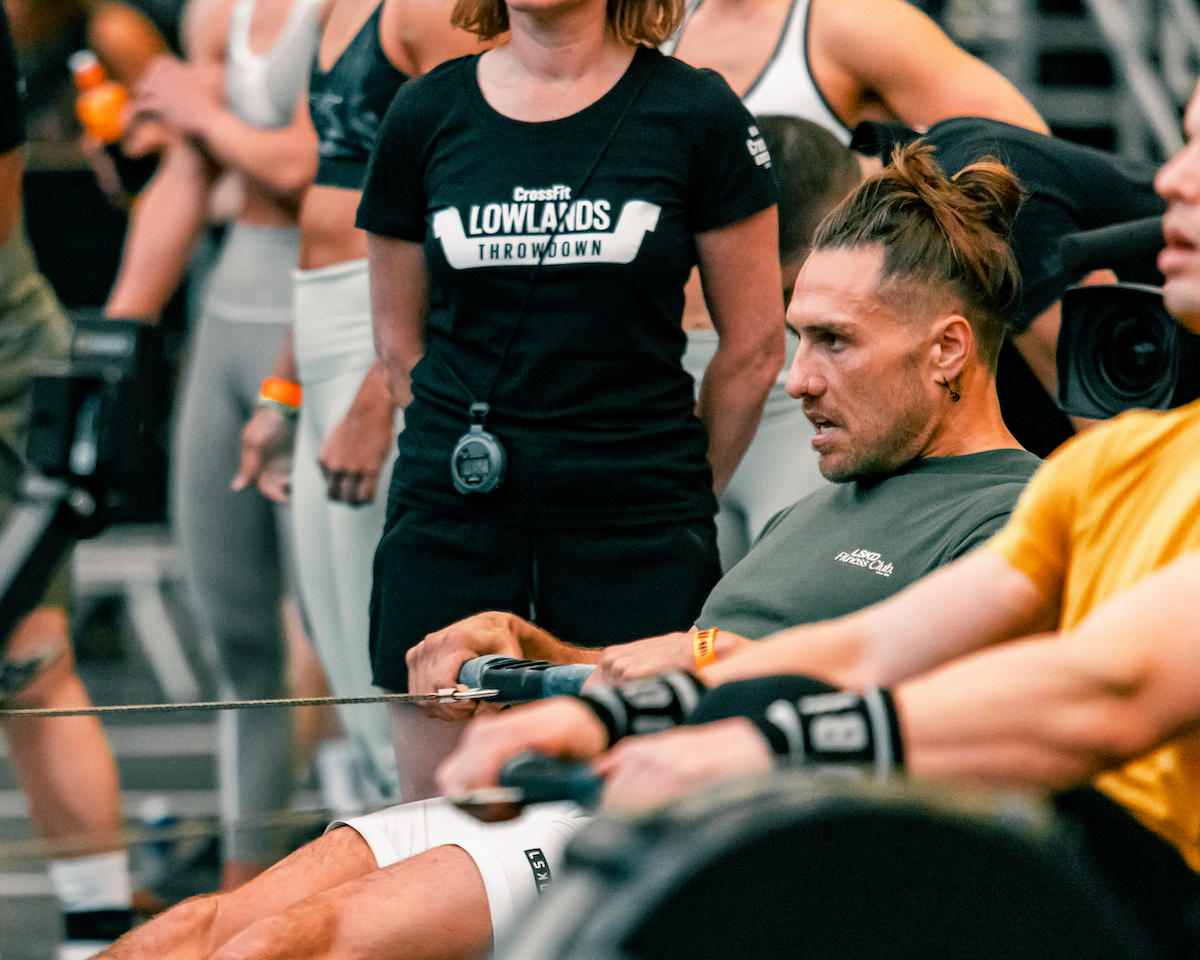 Lifting heavy was the name of the game on Day 2. In Team Snatch Ladder, Keilin Coleman from Yellow Belly CrossFit hit a 90-kg (198.4 lb) snatch on the final platform, making an ambitious 9-kg (19.8 lb) jump from her previous bar. In the next heat, Patricia Strenius of CrossFit Nordic made it look easy while snatching 91 kg ( 200.6 lb).

In the women's Barbell Complex, it was a duel between Laura Horvath and Mia Hesketh. Horvath opened with an incredible 102-kg complex, hitting it with ease. Hesketh matched Horvath’s 102 kg in her second attempt, keeping the ladies neck and neck. To try to create some space, Horvath chose 106 kg for her second attempt and completed it with no issue. In an attempt to beat Horvath, Hesketh took a risky shot at 107 kg for her final lift but unfortunately failed. She then took a final attempt at 108 kg and failed that lift too, giving Horvath the win. 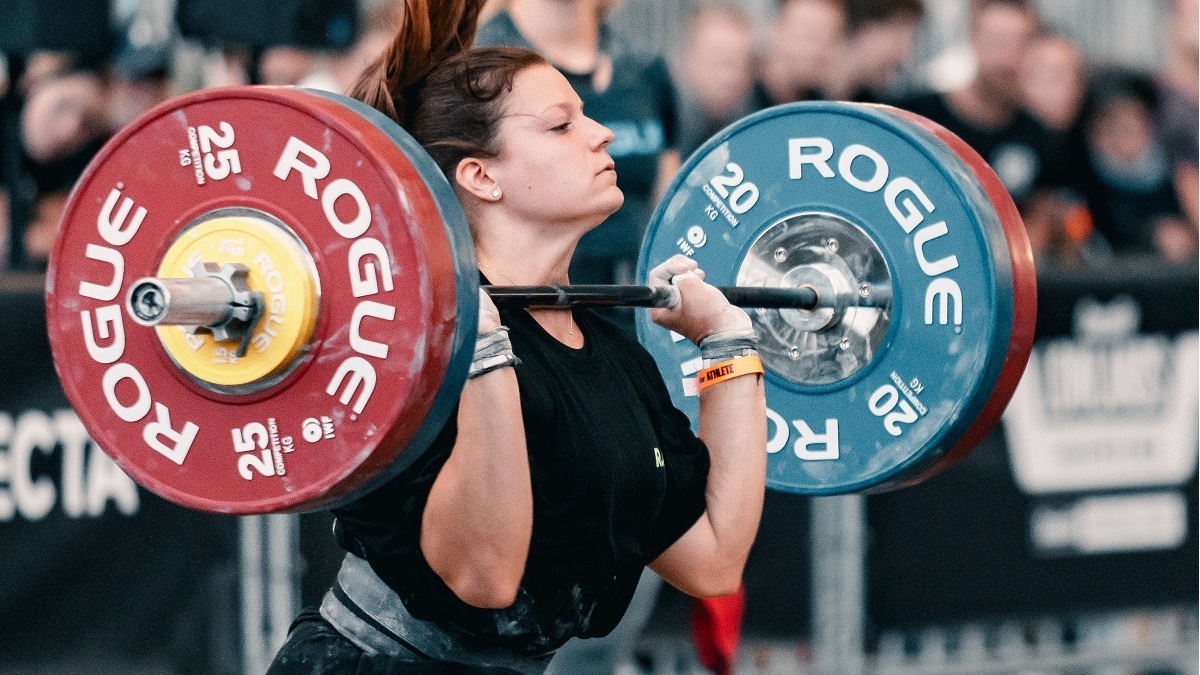 CrossFit Rekjavík did what no team has done at the Lowlands Throwdown. Former individual stars Thorisdottir, Porter, Lauren Fisher, and Tola Morakinyo swept the weekend, winning first place in every event — and showing the team is more than capable of going head-to-head with Team Mayhem Freedom at the CrossFit Games. Could CrossFit Reykjavík be the team to steal the Affiliate Cup from Mayhem?

On the women’s side, it was a fight to the finish for Sara Sigmundsdottir, who was looking to make her seventh trip to the CrossFit Games. Starting Day 3 in seventh place, Sigmundsdottir gave her all in Event 5, traveling at lightning speed on the handstand push-ups and moving nonstop on the final devils presses, putting her in hopeful contention for a top-five spot. Unfortunately, in Event 6, the heavy overhead squat was a limiting factor for Sigmundsdottir, who just six months ago returned to lifting after tearing her ACL. She finished the day in sixth place and out of Games contention

A major upset for the men during Event 6 shook up the leaderboard. Entering the event from sixth place, Luka Đukić took a short break on his bar muscle-ups, allowing Mortiz Fiebig to get to the barbell first. Although Uldis Upenieks was second to the overhead squats, he was unable to complete them before the time cap. Moritz took the event win, with Björgvin Karl Guðmundsson in second. By this time, Adrian Mundwiler, Luka Đukić, and Enrico Zenoni were all in contention for a spot at the Games. Zenoni crossed ahead of Luka Đukić, with Mundwiler crossing the line with just 30 seconds to spare.

After the close of competition, Luka Đukić and Mundwiler narrowly missed Games qualification, finishing 13 and 28 points behind Zenoni, respectively.

Luka's brother, Lazar, took fourth in the final workout and stood atop the podium after leading all weekend. 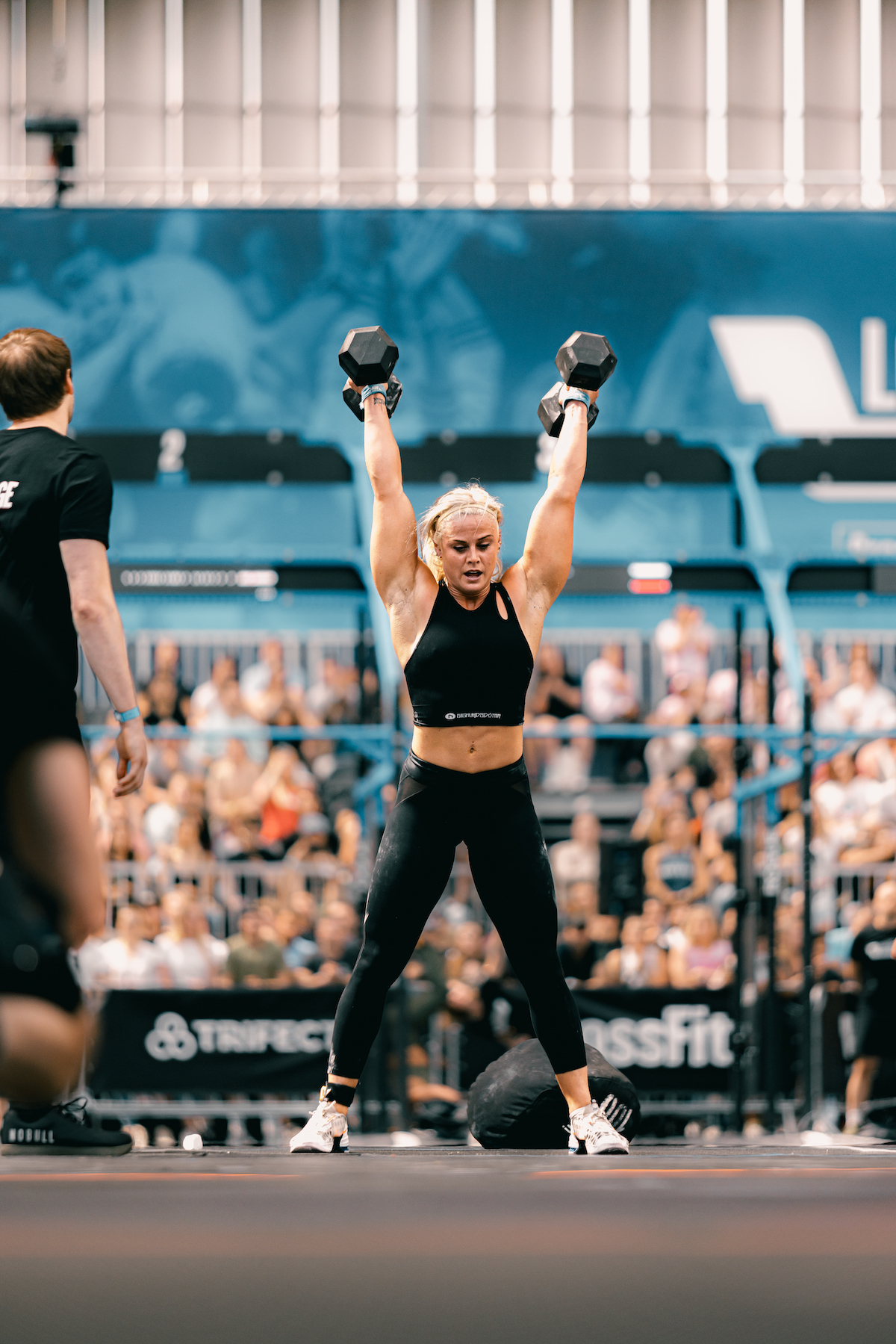 Coming up, two more live competitions — the Mid-Atlantic CrossFit Challenge and CrossFit Fittest in Cape Town — will test individuals and teams before more CrossFit Games tickets are handed out from May 27-29. The first set of age-group divisions, 14-17, 35-39, 40-44, 45-49, are set to compete at the 2022 Age-Group Semifinal from May 26-29.

Learn More About the 2022 Semifinals:

Editor's Note: This story has been edited to correct typographical errors in Toomey's load for the Barbell Complex and the 2014 Legless record. A mislabeling of Luka and Lazar Đukić in Day 3 Lowlands highlights has also been corrected. (May 26, 2022)