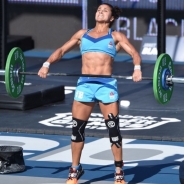 Cheryl Brost is a ten-time qualifier and eight-time CrossFit Games athlete with Games experience across three divisions: the individual competition and the Masters Women 40-44 and 45-49 Divisions. After starting CrossFit in 2009, the former All-American soccer player took 13th in her first Games appearance in 2010. She went on to qualify for the Games as an individual for the next two years, taking her best finish of seventh in 2011. Brost has qualified for the Games as a master every year since 2013 (though an achilles injury at the 2013 North West Regional and a 2018 post Qualifier shoulder injury forced her to withdraw). Brost finished the 2016 and 2017 season with a career-best finish of first place in the 45-49 Division (she also won the Open and the Masters Qualifier that year). Brost missed out on the 2018 Games due to a shoulder injury she suffered playing soccer, which required complete reconstruction surgery.