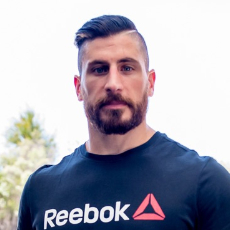 A seven-year CrossFit Games veteran (2011-2017) and former motocross racer, Rob Forte is Australia’s most enduring CrossFit athlete, with the most CrossFit Games appearances of any athlete from the land down under. Known for writing and following his own programming, Forte has been a consistently dominant force at the Australian and Pacific Regionals, finishing in the top three every year since 2011 with back-to-back victories in 2013 and 2014. With a best CrossFit Games finish of 12th in 2014 and a worst of 35th in 2012, Forte is one of the most improved Games competitors. In 2016 & 2017, he shared the field with his mother, Nella Forte. He aslo had his affiliate team compete at the 2017 CrossFit Games.