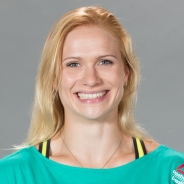 Annie Thorisdottir—or Iceland Annie, as she’s sometimes called—is a two-time CrossFit Games champion (2011-2012) and ten times CrossFit Games veteran. Of those appearances, she’s stood on the podium six times —she took second in 2010 and 2014 ,third in 2017 and 2021 less then a year after giving birth - in addition to her title-winning finishes—and with the exception of 2015, when she was forced to withdraw due to heat stroke, she’s never finished below the top 13. First recognized at the 2009 CrossFit Games, when she famously performed her first muscle-up mid-competition, Thorisdottir often competes with a smile and has been celebrated throughout her career for her positive attitude, which permeated even her season on the sidelines, when a back injury in 2013 forced her to sit out. A former gymnast, Thorisdottir owns CrossFit Reykjavik in Iceland.