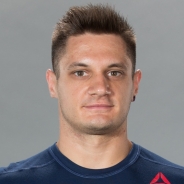 When Travis Williams started CrossFit in 2011, he was 70 lb. overweight. Now, he’s a two-time CrossFit Games athlete. After competing with team CrossFit Kemah at the South Central Regional in 2013, he took 23rd in his first individual regional appearance in 2014, which he followed with spectacularly improved Games-qualifying, second-place performances the next two years. At the 2016 Games, he improved upon his previous 32nd-place Games finish, ending the weekend in 19th place. Williams is currently a trainer at U Can CrossFit in League City, Texas.