This season, many records were broken, and the majority started with “the youngest.”

They weren’t the first fledglings to flourish on the big stage; Haley Adams took 6th at the 2019 CrossFit Games at just 18. But it seems she was more of a trendsetter than an outlier, as more and more youngsters have joined the mix since.

And they’re dominating the field of Games veterans.

An Open Call For All Aspiring Teens

The 2021 CrossFit Open starts with an even playing field. Athletes of all ages from all countries competed for a chance to advance to the next stage of competition, and from among the masses, two teenaged girls snuck their way to the top of the leaderboard.

All eyes were on Cary back in March after the 16-year-old set the world record in 21.2 with a time of 8:51, making her the youngest athlete to win an Open workout. She finished the Open in second place worldwide, just behind reigning champion Tia-Clair Toomey. Sitting in fifth place was 17-year-old O’Brien, who had an impressive second-place finish in 21.3. 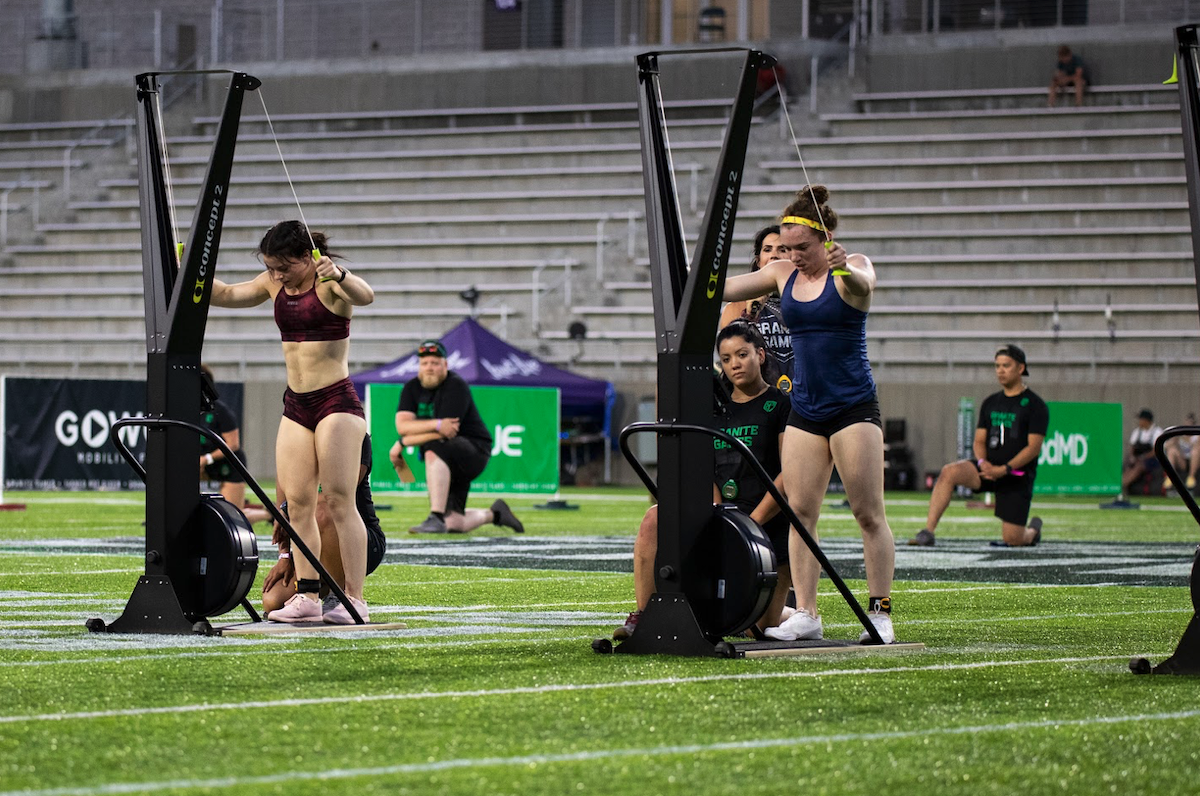 Both teens made it a mission to stand out from the minute the CrossFit Games season started, not in the teenage division but as individuals. Neither teen dropped out of the top five on their way to the Games.

O’Brien and Cary finished the North America Individual Quarterfinal in third and fourth place, respectively. At the Granite Games Semifinal, O’Brien took second and Cary nabbed third. It was clear they were ready for the big stage, no matter their age and experience.

Keeping Up With the Veterans

When O’Brien and Cary were just 5 years old, two-time champion Annie Thorisdottir made her CrossFit Games debut. When Medeiros started CrossFit at 13 years old, Rich Froning had won the CrossFit Games for the second year in a row. When Guilherme Malheiros — who took 7th in Madison in August — was 13, Scott Panchik was already adding his second Games appearance to his career record. 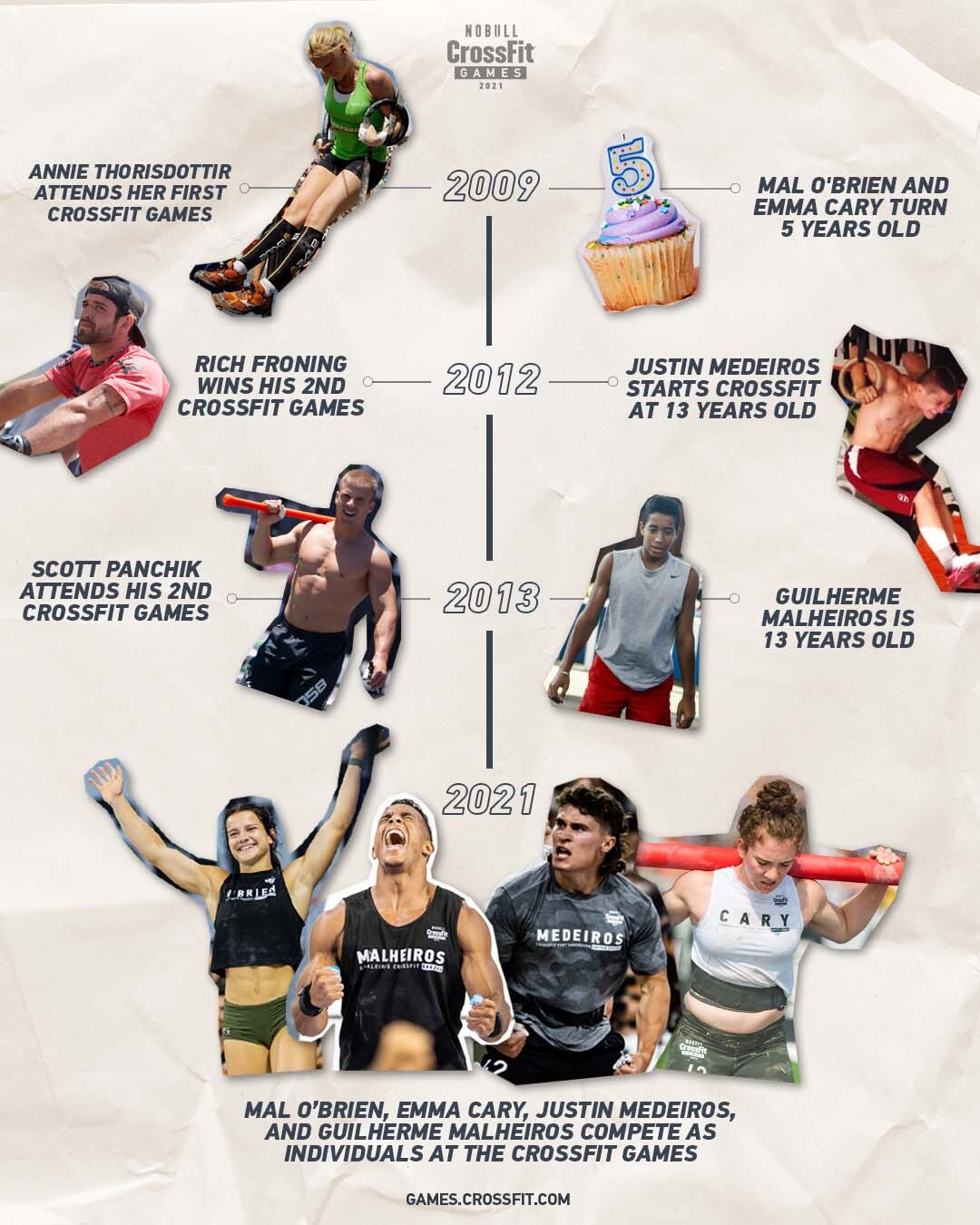 Now, these youths are competing alongside — and even beating — many of these veteran athletes. The future of CrossFit is already here, and they are all under the age of 22.

“We have kids — quite literally kids — going to the Games with a ton of competition experience under their belt in the teenage divisions and in offseason competitions. To see it now and how well they’re able to perform on the big stage at such a young age—” Tommy Marquez trailed off.

When O’Brien competed in the Coliseum for the first time in Event 4 of the 2021 NOBULL CrossFit Games, she not only won the event and set a new record — for the youngest athlete to win an individual Games event — but she also knocked Toomey off her winning streak.

“It takes something special to look over your right shoulder at the fittest woman in the world and then leave her behind you,” Justin Bergh said.

Malheiros was a hidden gem at the 2021 Games, becoming the first Brazilian to win an individual Games event with an impressive 305-lb. snatch. He also tied with Games vet Patrick Vellner for most men’s event wins and secured the “Most Improved” award with his seventh-place finish, all at the age of 21.

Once deemed “the future of CrossFit” by Dave Castro after the 2020 CrossFit Games, 22-year-old Medeiros sped up the timeline, becoming the youngest CrossFit Games champion in history — and in just his second Games appearance.

Words of Wisdom From the Fittest Woman on Earth

After O’Brien’s sensational win in Event 4, reality hit Toomey. Her competitors are knocking on her door, ready to overtake her reign — and the competition is teenaged.

“It is very cool to hear about the younger generation just trying to be the new me. But I also would love for them to be the new them,” Toomey said.

The next generation is making a name for themselves, and the field will only become more stacked with the youth moving forward.

Looking at 15-year-old  Olivia Kerstetter in the Girls 14-15 division, who out-lifted the entire women’s field — including teens, masters, and individuals — with a 202-lb. snatch. She may try to top O’Brien and Cary next year.

The 2022 CrossFit Open starts in just a few months. All ages start on the same playing field, and by August, a new field of elite athletes will surface. Will the youngsters disrupt the natural order in Madison once again? While Games veterans aren’t getting any younger, their competition definitely is.

Watch the full episode of Miles to Madison Ep.09: Return of the CrossFit Games on YouTube.