For the first time in CrossFit Games history, all divisions performed the exact same event:

*Add 2 calories each round for 6 rounds, then complete as many calories as possible for rounds 7 and 8.

The event was held at the University of Wisconsin-Madison’s Soderholm Family Aquatic Center, where athletes swam down and back across the 25-yard width of the Olympic-sized pool — divided into 20 lanes — before hoisting themselves out of the water for the calories. The event marked the third time a swimming event was held in a pool at the CrossFit Games: The first was 2013’s aptly named event The Pool, followed by Swim ‘N’ Stuff in 2020.

2017’s Run Swim Run presented a nearly identical challenge for all divisions. All athletes completed a 1.5-mile run, a 500-m swim in Lake Monona, and another 1.5-mile run; however, during the team competition, male and female pairs had to run together, each holding one end of a rope. They could swim separately but could not start the second run until both had returned from the swim. Thus, it was not possible to compare performances across all divisions.

Past swimming events at the CrossFit Games typically heavily favored the best swimmers, regardless of the other implements used. It was a little different this year with Rinse ‘N’ Repeat. Athletes still had to be a good-to-great swimmer to do well in the event, but they did not have to be the best. The money rounds were the last two: rounds 7 and 8, where it was an all-out effort for four minutes with two 50-yard swims and max ski erg calories. The relatively short distance of 50 yards did not allow for the top swimmers to gain a significant lead over the good swimmers, and for both the individual women’s and men’s fields, it came down to the ski erg. 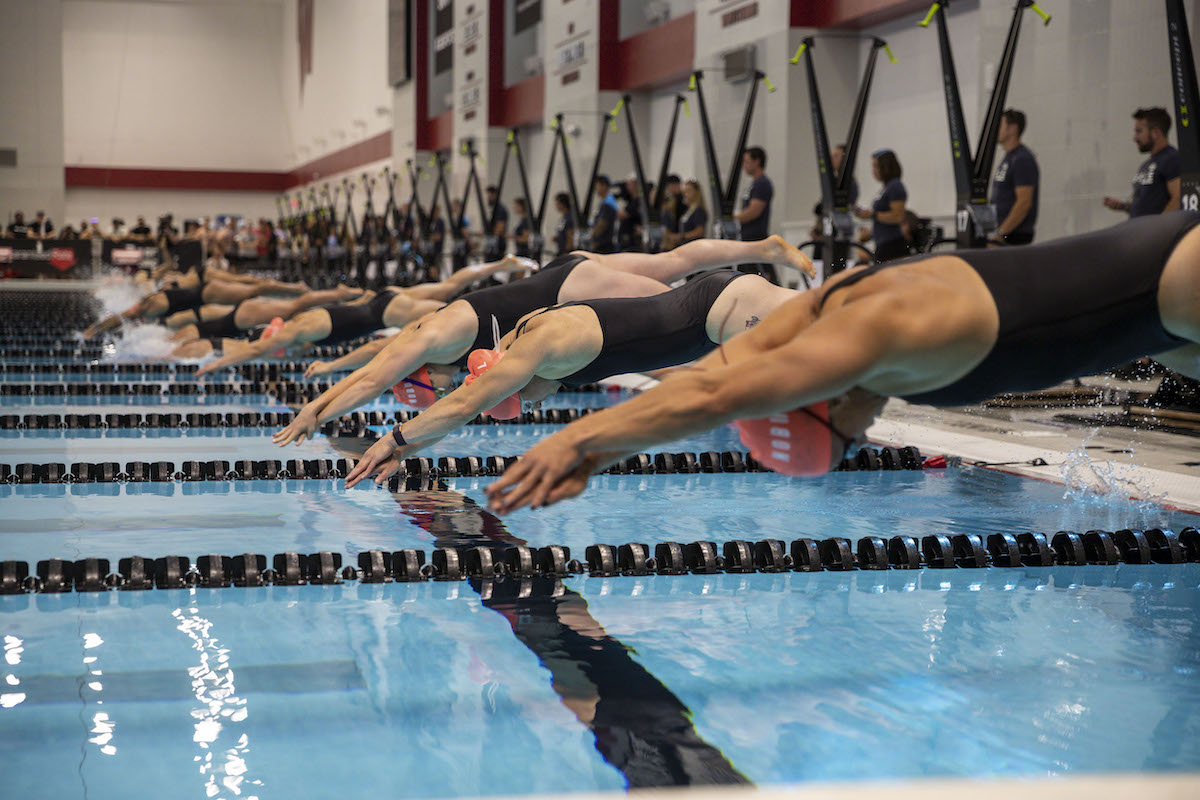 Brent Fikowski, Noah Ohlsen, and Björgvin Karl Guðmundsson are three other top male swimmers at the Games. Fikowski took first, second, and third in the three Games swim events he competed in prior to 2022; this year, he took sixth. Ohlsen and Guðmundsson have each had a number of top-five and top-10 swim event finishes during their careers with a couple outside of the top 10. This year, Ohlsen took 16th and Guðmundsson 19th.

And as well as Koski has performed in the water during his career, Tia-Clair Toomey has done even better on the women’s side with six consecutive CrossFit Games swim event wins prior to 2022. This year, she took fourth place — incidentally, the same place she took as a rookie in 2015’s Pier Paddle, the only other swim event she’s failed to win. If Toomey hadn’t taken all those event wins, Kristi O’Connell would have. Instead, O’Connell took four second-place swim event finishes as an individual, right behind Toomey. Additionally, O’Connell had the best time among all women and men in 2019’s team swimming event, Team Swim Paddle. This year, however, she finished in 19th place. 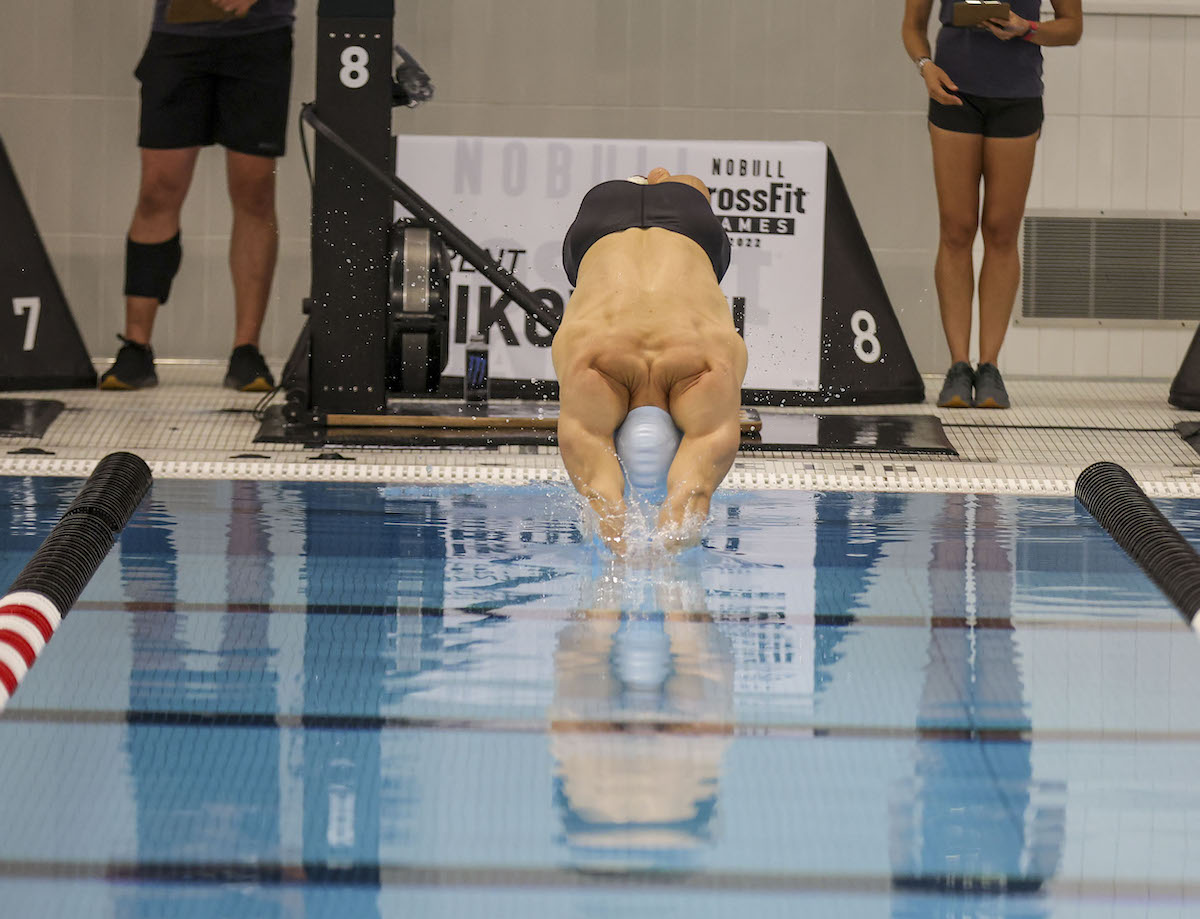 Despite the decline in performance from previous years’ best swimmers, Rinse ‘N’ Repeat’s top performers were still skilled swimmers. Lucy Campbell, an international-level open-water swimmer, won the event with an impressive 137 calories, while former collegiate swimmer Amanda Barnhart took second. Kara Saunders and Haley Adams, who have had success in Games swimming events, took fifth and sixth, respectively. On the men’s side, Roman Khrennikov had a dominant performance, winning the event with 160 calories. Khrennikov took full advantage of his excellent range of cardio — and it didn’t hurt that he was in the same pool that he trained in all season leading up to the Games. Samuel Kwant, who won his last swimming event in 2020 — taking a rare event win from Mat Fraser — took fourth this year. Former water polo player Lazar Đukić took fifth this year; he came in second place in last year’s swim event.

Rinse ‘N’ Repeat dulled the advantage of some of the elite swimmers’ experience and tested full cardio prowess with the ski erg at the end. Speed in the water gave the athletes more time to ski but was not always the determining factor in event success.

As noted above, all team members completed the same event as everyone else, with team scores consisting of cumulative calories pulled by all four members. Unsurprisingly, CrossFit Mayhem Freedom won the event with a total of 530 calories — Rich Froning and Samuel Cournoyer banked 143 each, Andrea Nisler pulled 127, and Taylor Williamson contributed 117. The performance was in keeping with past events wherein members’ individual efforts were combined for a cumulative total — the reigning Affiliate Cup champion team may not have the best overall individual lifts or scores for the men or women, but all four members combined present some of the top scores. Mayhem Freedom won the swim event at last year’s Games as well, and three of its four members returned this year. Second place in the event went to CrossFit Reykjavík with a total of 515 calories – Khan Porter, 146; Tola Morakinyo, 132; Annie Thorisdottir, 124; and Lauren Fisher, 113. 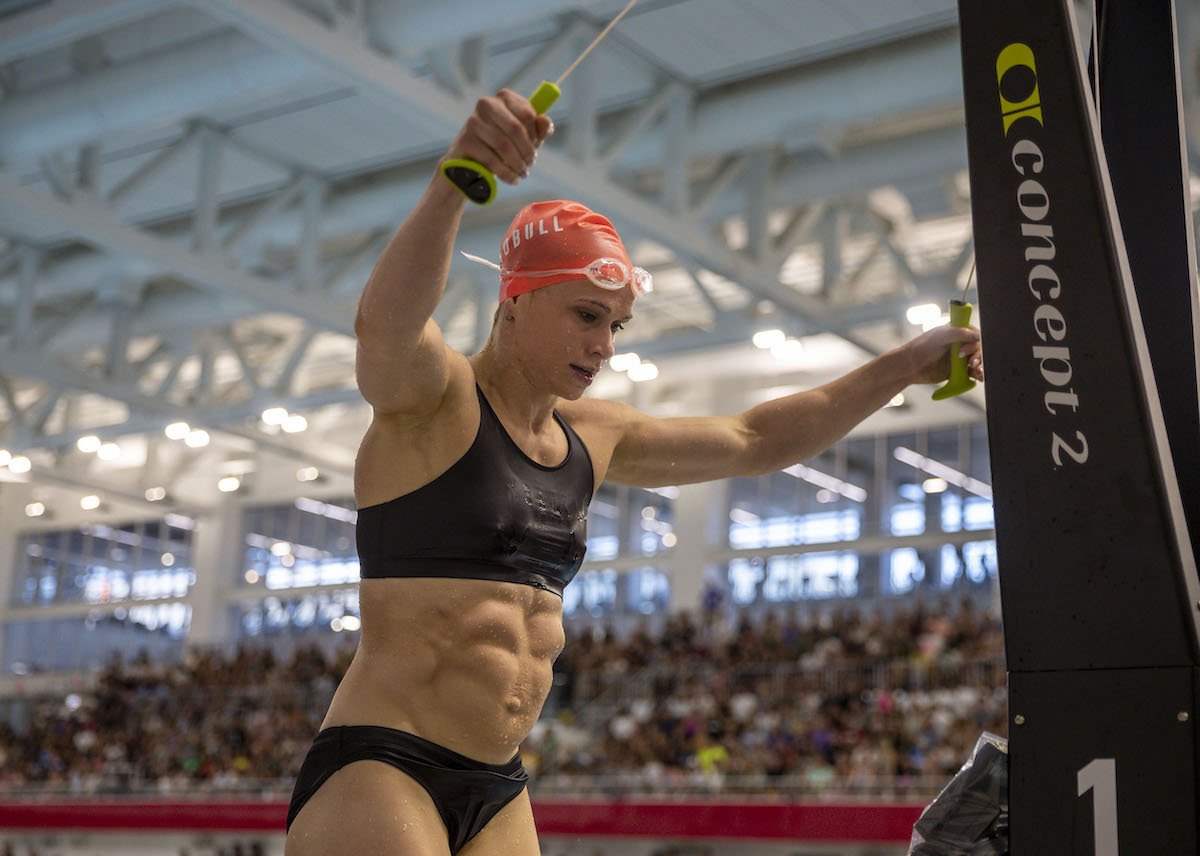 For the team men, CrossFit Urban Energy’s Johann Van Zyl had the top score with 147 calories, maximizing his height of 6 feet, 3 inches. This effort would have placed him between 10th and 13th in the individual men’s field, just edging out Khan Porter and Nicolay Billaudel, who both completed 146 calories. Below are the top men’s team-member scores from the event.

For the team women, Katelin Van Zyl joined her husband at the top with 130 calories. The power couple helped CrossFit Urban Energy to a fifth-place finish in the event, matching the team’s finish in last year’s swim event with the exact same team members. Katelin matched the scores of individual countrywomen Toomey and Saunders and would have placed between fourth and sixth in the individual women’s field.

Andrea Nisler accumulated the second-most calories of all team women with 127. She was also the second-fastest athlete — man or woman — in the 2019 Games team swimming event when she was on CrossFit OC3’s team (when she beat Froning in the same event).

Thorisdottir was the third-best team woman with 124 calories, a great performance for her. As an individual, Thorisdottir historically finished mid-pack in Games swimming events.

Below are the top women’s team-member scores from the event.

Note regarding the team members’ scores above: There may be a one-calorie discrepancy with some of the scores cited. The team scores were acquired from the synchronized Concept2 data files. However, there were some data file errors. The judges recorded the final score used for each member for the team’s cumulative total by reading the final monitor or using other tracking means.

Chyna Cho (35-39) led the way with 126 calories for the masters women, which would have placed her 10th or 11th in the women’s individual field. The former collegiate swimmer has always done well in Games swimming events (five individual event finishes in the top two to six). In the 2019 Games team swimming event, she was right behind Andrea Nisler for the third-best time overall (men or women). 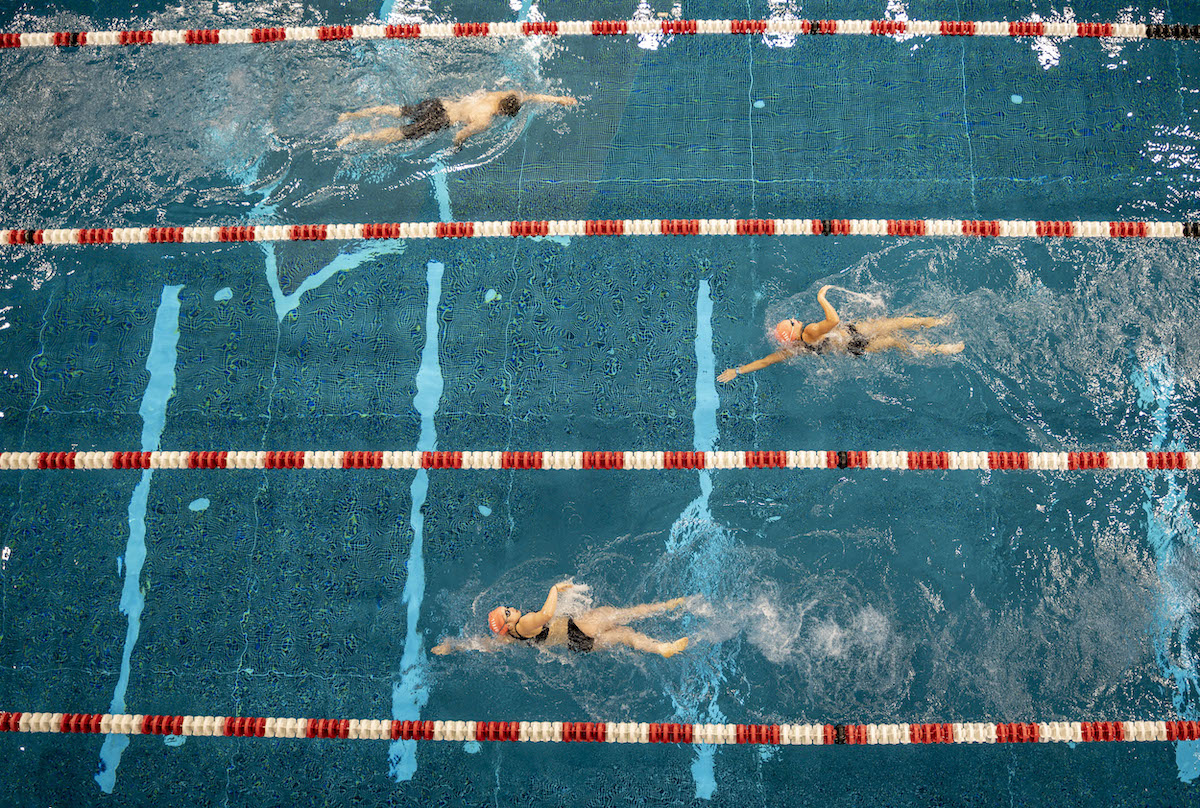 On the teen side, Ty Jenkins (16-17) put his swimming background to good use with an amazing score of 142 calories, which was the best of all the age-group athletes. In fact, he would have been 21st in the individual men’s field. Andrei Petku (16-17), also with a swimming background, had the next-best teen boys’ score with 131 calories. RJ Mestre had the third-best (and most of the 14-15 division) with 128 calories.

For the teenage girls, Jadzia Onorati-Phillips (16-17) had the best score of 124 calories, which was the second-most of all female age-group athletes. Her score would have placed her 12th to 14th in the individual women’s field. Olivia Kerstetter (16-17) had the next-best teen girls’ score with 121 calories. Abigail Moore, a high-school varsity swimmer, had the third-best score (and most in the 14-15 division) with 115 calories.

Rinse ‘N’ Repeat was the fourth time the age-group athletes have swum at the CrossFit Games, the others being in 2017, 2018, and 2021. Proficient age-group swimmers have reaped the benefits in these events. Below is a listing of age-group athletes who placed in the top three in their division this year and who also placed in the top three in their respective divisions in all the past Games age-group swimming events they competed in:

A great aspect of Rinse ‘N’ Repeat was that there were no modifications for the adaptive athletes in their first Games swimming event — and they did not disappoint.

Luke Reeson (Men’s Lower Extremity) had an outstanding score of 145 calories. To put this in perspective, he would have been 15th to 18th in the men’s individual field, the fourth-best male team member, or best age-group athlete (he’ll be masters-age next year). Benjamin Fallon (Men’s Neuromuscular) had the second-most calories with 123. Casey Acree had the most calories with 74 for the Men’s Upper Extremity division. 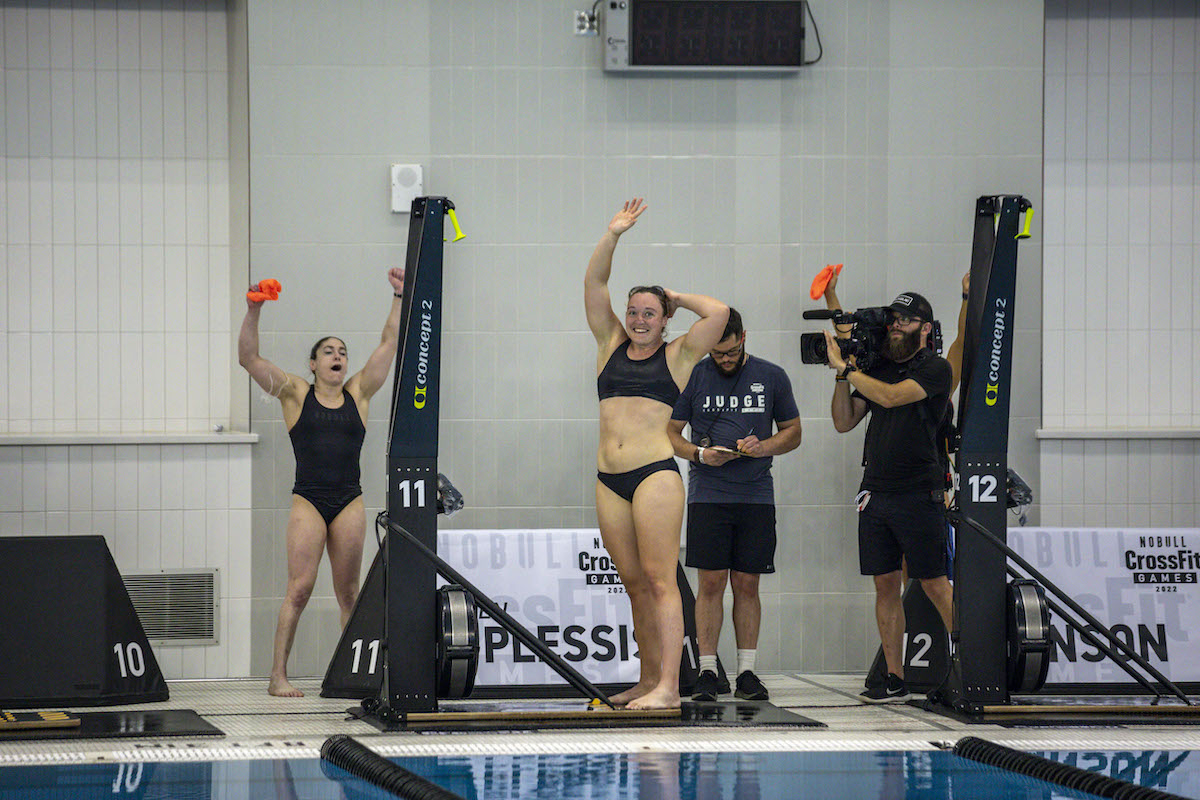 The great beauty in having every CrossFit Games athlete perform the exact same workout is that it facilitates cross-divisional comparisons. In addition to the comparisons noted above, other notable comparisons from the 418 athletes who performed the workout include:

137: Lucy Campbell (Women’s Individual) tied for the 44th-most calories overall. Also, with her event win, she beat 14 of the individual men and tied the best men’s masters calories.

123: Benjamin Fallon (Men’s Neuromuscular) tied for 124th for most calories overall and 106th among all male athletes. 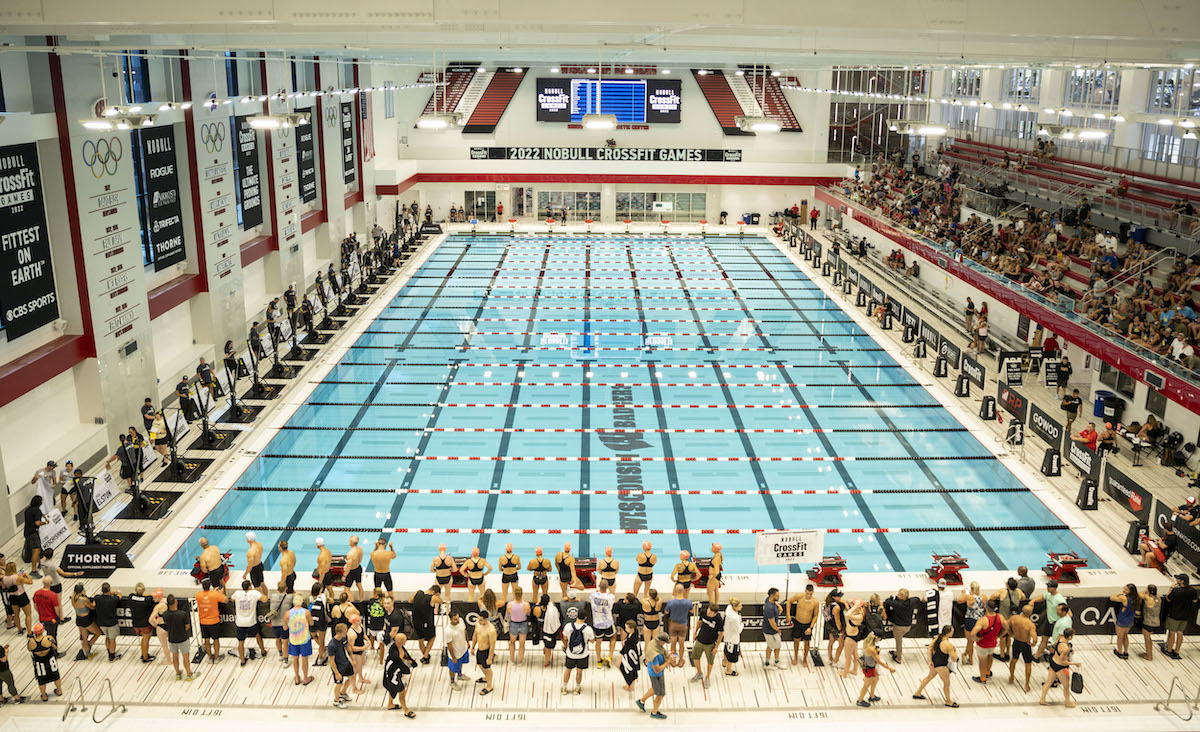 The Future of Identical Events

When asked if having an identical event across all divisions will become a recurring theme at the Games, CrossFit Games Director of Competition Adrian Bozman said he likes the idea but is not quite sure given the logistical hurdles required to pull off such a feat. Identical workouts for all divisions across the Open have only been programmed a couple times: Open Workout 12.1’s infamous seven minutes of burpees, Open Workouts 15.1a’s and 18.2a’s 1-rep maxes, and Open Workouts 21.1 and 21.4 came close.

Given the success of Rinse ‘N’ Repeat, additional identical events across all divisions at the Games would be well received. They would allow us to not just play out “what-if” scenarios but actually know how athletes from all divisions would stack up in the same event. In 2017’s Run Swim Run, it was theorized that a top age-group athlete could post the all-around best score for the men or women. It did not happen then; nor did it happen in 2022 with even more divisions competing.

Maybe next time it could.

Watch the Adaptive and Age-Group Athletes in Rinse 'N' Repeat

Watch the Individual and Team Athletes in Rinse 'N' Repeat