Maybe your gym is in the heart of a bustling metro area where there are so many CrossFit gyms that a local competition would be like a miniature CrossFit Games.

Or perhaps it’s in a rural area where you throw down with the one or two other affiliates in your town to raise money for charity every year.

Maybe yours is the only CrossFit affiliate in your country, and you’ve never had the chance to see where your crew stands compared to another.

New to the 2020 CrossFit Open, the affiliate leaderboard is your tool for comparing your CrossFit gym’s Open performance to any and every other affiliate in good standing across the globe.

A Tradition of Competition

Inter-gym competition has been a celebrated part of CrossFit culture since its inception.

In the early days of CrossFit Games competition, the fittest CrossFit gyms were awarded the Affiliate Cup — beginning with CrossFit Santa Cruz, which earned the top spot at the first CrossFit Games in 2007 based on the performance of its individual athletes. The Affiliate Cup became an official team competition for the first time in 2009, and when the Open era began in 2011, the combined total of a gym's top individual scores for every Open workout represented that gym’s rank on the team leaderboard.

The team competition has since evolved. Now, teams from any affiliate or geographic location may earn Games qualification via one of the Sanctionals competitions with a team division. But that doesn’t mean the quest to find the fittest affiliate is over.

At the end of the Open in November, CrossFit will recognize the top affiliates in each scoring category and country — and this time, everybody’s score counts.

As soon as an affiliate has a member registered for the Open, that gym will appear on the affiliate leaderboard (no additional registration is required; unaffiliated gyms will not appear on this leaderboard).

As the Open progresses, you’ll be able to sort your gym’s ranking in several ways: by affiliate, country, and scoring category — the top two, four, or 10 athletes, full roster, or average. 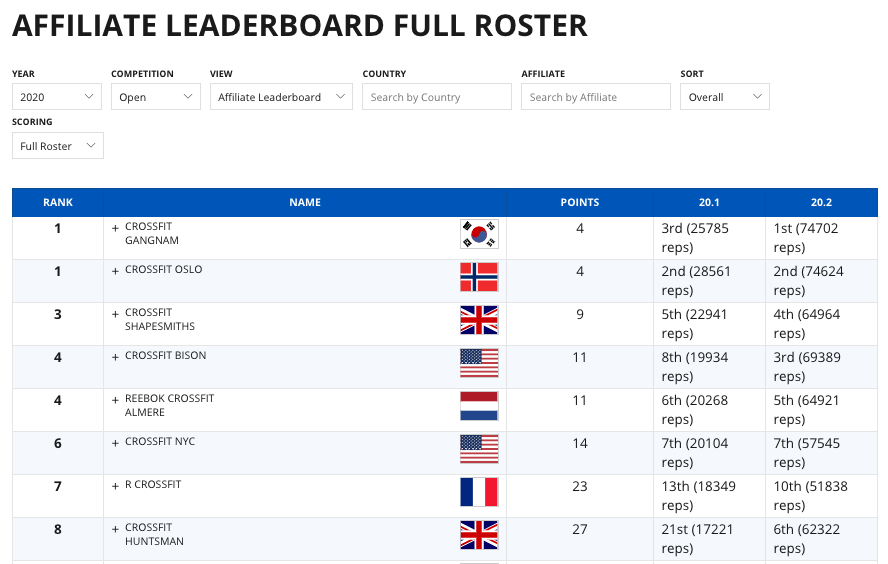 This multifaceted leaderboard will allow affiliates to view their athletes’ performances from a whole new perspective. Maybe your affiliate never had enough individually competitive scores to advance to the next stage of competition. Now you can see how it ranks based only on the top couple of scores.

Maybe 50 percent of your athletes participate in the Open, but you’re an affiliate of just 50 members. Great — this year, you can make an even comparison with a gym three times your size by filtering for the average of your members’ performances. 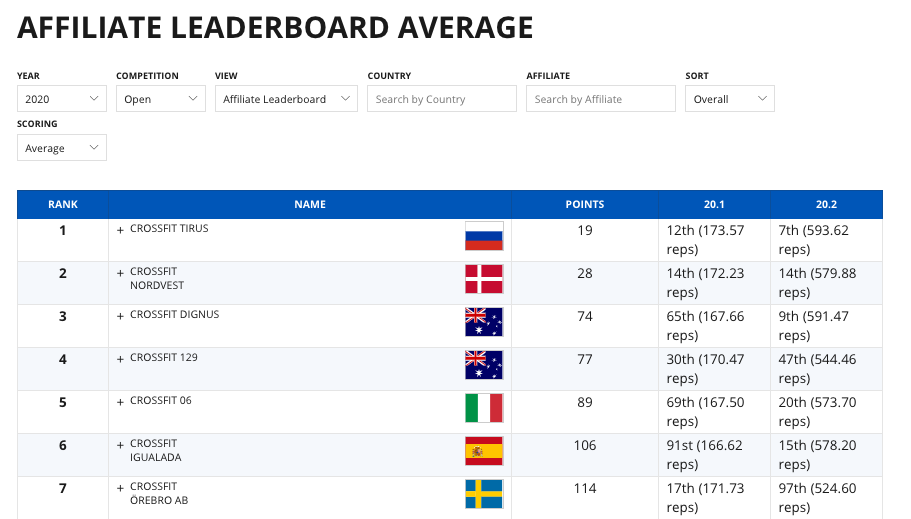 These features create more opportunities to develop a little camaraderie inside your gym and perhaps build some friendly relationships and rivalries with your neighbors.

The affiliate leaderboard is a unique way to put every single CrossFit affiliate, regardless of location or size, on an even playing field.

Related: This year, Airrosti is giving away US$2,000 in Rogue gift cards and tons of box gear to two stellar boxes in Texas, Virginia, Ohio, and Washington. That’s eight boxes that will get a major mobility upgrade. Learn more.

Enjoy This Time of Year

Healthy competition isn’t about beating the “enemy.” It’s about spurring each other on and raising the bar for everyone as we all get better together. And what better way to motivate than some bragging rights?

So join the game; join the worldwide quest for fitness. Snap a photo of your crew and send some friendly trash talk to the gym your former lifting buddy or coach started because he or she was so passionate about bringing fitness to an underserved community.

Prove that although your gym may be small, it is mighty.

Raise your country’s CrossFit community from obscurity with the scores of your top athletes.

Unite your gym community and motivate each other to work hard, play hard, and get fitter.

We’re two weeks in, and there’s still plenty in store. Check out the latest results here.