The photo is the stuff of legend: Reynolds reclines, elbow resting on the head of a glorious bearskin rug, a cigarette drooping beneath a magnificent moustache. Reynolds is naked, a hirsute forearm obscuring his crotch, if only barely.

David Charbonneau recreated the picture for a holiday card—and he has no regrets at all. 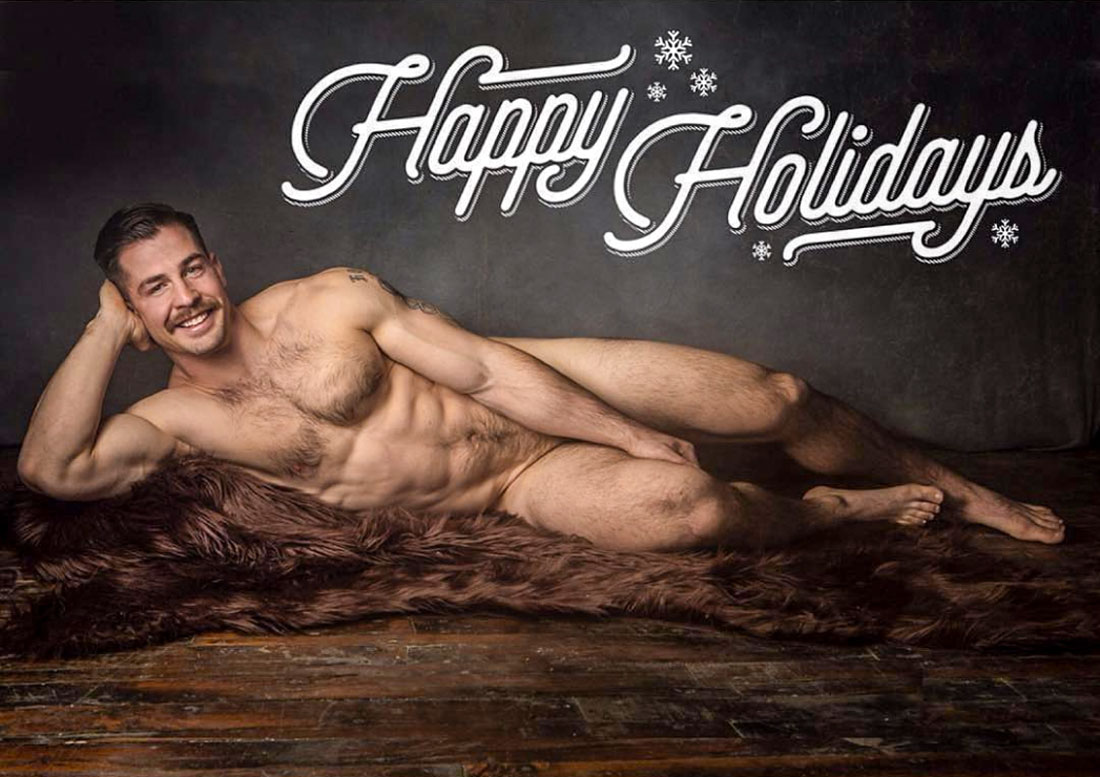 It’s actually the profile pic on his CrossFit Games athlete page. Charbonneau said he wanted to spice up the Games a little.

“It’s always the same old thing—people like lifting the biggest weight possible. It would be really funny if someone went and searched your name and a naked picture of yourself came up.”

He got his wish: The image is the first one pulled by a Google search even though Charbonneau has been a fixture at CrossFit competitions since 2011.

Here’s his resume, which is lengthy and impressive:

Charbonneau is competing this year on the CrossFit Queens team, which he coaches with Amy Dracup. But there’s more: He’s coach to Individual athletes Tim Paulson, Michael Palomba and Emmy Simpkins. And he coaches Max Vargas, who is competing in the South Regional this weekend. He said he also has 15-20 additional remote clients, with two of them competing on Diamond State in the upcoming Atlantic Regional.

The 31-year-old head coach at CrossFit Queens had a bit of spare time for an interview after his team finished second in Heat 2 of Event 1 to open the East Regional. He knows he’ll be under pressure for three days, but it’s what he signed up for.

“After this is all said and done, my team athletes get to leave and go rest. I’m going to stick around and coach my guys. It’s a long day for me—a long weekend,” he said.

He has realistic goals for the CrossFit Queens team, which is rounded out by Regionals rookies Deanna Gibaldi, Nicole Rinaldi, Morgan Pitcher, Ben Swedish and Brian Fink. They just wanted to get to the Regionals floor, and they’re hoping to claw into the top heat by the time the competition is over.

After a long run all the way to the Games in 2016, Charbonneau wasn’t going to compete this year, but he got sucked into joining the team during the Open due to a bit of coaxing from his teammates. Still, he’s not feeling a lot of pressure.

“The goal was to make it, and we made it. We’re playing with house money right now,” he said with a smile.

Charbonneau’s three Individual athletes, on the other hand, were all at the East Regional last year, and Paulson has been a four-year fixture, finishing as high as eighth in 2015. He was 15th last year, and Charbonneau suggests he’s a dark horse to qualify for the Games in 2017.

The coach will be watching Paulson and Palomba to see what their body language tells him during the first two events. He said they’re both animated, so exuberance is a very good sign no matter what the scoreboard says. If they’re looking down, they’ll get a reset talk. If not, Charbonneau will stay out of their way.

“It they’re on it, then I’m going to just keep pushing them forward,” he said.

He added: “There’s like a good mix of coddling and not coddling when it comes to coaching. You’re like their psychologist as well.”

With one event down, Charbonneau blew 15 precious minutes doing the interview for this story, then planned to stretch, eat and chill before hitting Event 2 at 11:20 a.m. Somewhere along the line, he probably found out his team had taken fourth in the first event.

Interestingly, four is a somewhat significant number for Charbonneau, who missed qualifying for the CrossFit Games as an individual by one spot in both 2011 and 2012. At last year’s Games, Charbonneau and Dynamix were a mere 7 points away from the podium.

When Event 2 wrapped at 11:35, he had less than an hour before the first Individual heat. Luckily, both Palomba and Paulson were in the second men’s heat, at 1 p.m., with Simpkins on deck an hour later.

That pressure was no doubt reduced by the fact that Charbonneau’s team finished fifth in Event 2 and currently sits in a CrossFit Games qualifying spot.

Charbonneau laughed: “I guess that’s my storyline: fourth place all the time.”

That and the Burt Reynolds picture.

For complete details, visit the Leaderboard.