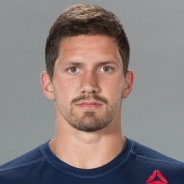 After three years at the regional level, Zak Carchedi made his CrossFit Games debut in 2016. A former collegiate football player, Carchedi started CrossFit in 2013. After a year of team competition, he took eighth in his first individual appearance at the North Central Regional in 2014, continuing to be a top performer at the Central Regional until his first Games appearance in 2016 and 2017. Carchedi recently moved to Florida and is a Coach at Crossfit South Florida.