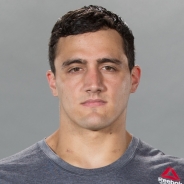 For Joseph Guesnier, a spot at the 2016 Reebok CrossFit Games was four years in the making. After starting CrossFit in 2012, he qualified for the South Central Regional less than a year later.Though he improved from 26th that year to 13th in 2014, the Games-hungry athlete switched to the team competition in 2015 to gain more experience. After helping team CrossFit Lubbock to a 35th-place Games finish in 2015, Guesnier’s strategy paid off in 2016 when he made his individual Games debut, finishing in 36th place. A former amateur MMA fighter, Guesnier owns Double T CrossFit in Lubbock, Texas.