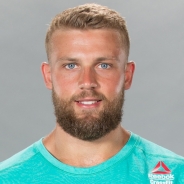 Originally from Odense, Denmark, Rasmus Wisbech Andersen made his individual CrossFit Games debut in 2016 after two years of team Games experience with team CrossFit Invictus. After starting CrossFit in 2012 with no prior athletic experience, Andersen took 13th at the Europe Regional in 2013 before moving to San Diego, California, to train at CrossFit Invictus. Since then, he’s helped team CrossFit Invictus win the Affiliate Cup Championship in 2014 and take 13th in 2015 before tackling the individual competition in 2016, when the rookie finished solidly in the middle of the pack in 25th place.