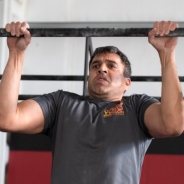 Sanjiv has a background in running participating in distances from 5K to the marathon. He became involved in triathlon and has competed in Sprint and Olympic distance events. Looking to change up his fitness, he started at CrossFit in 2015 at CrossFit Undeniable and participated in his first open in 2016 at MBS CrossFit. 2016 also brought more focus on yoga and he stepped away from training at an affiliate. He did complete the open at West Metro CrossFit in 2017. The next two years were lost to frac'ing in the Bakken and DJ Basin. 2019 was marked by a return to affiliate training at CrossFit Golden, 20# heavier and 2 years older.