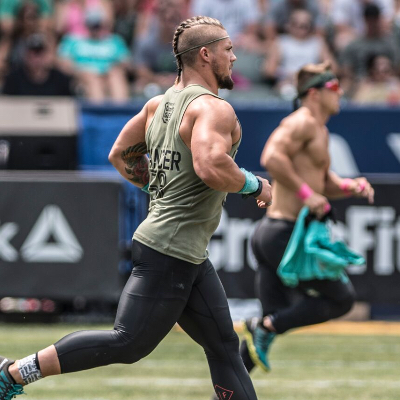 Sam Dancer was an individual rookie when he took 32nd at the 2016 Reebok CrossFit Games, but he had the reputation of a veteran. After taking 12th at the North Central Regional in 2013, he helped team CrossFit Conjugate to a second-place finish at the 2014 Reebok CrossFit Games, where he famously deadlifted 655 lb. In 2015, he returned to the individual competition with a 10th-place finish at the Central Regional before making his individual Games debut in 2016. Beloved by fans as much for his fun-loving personality as his strength—he often paints his nails for competitions for he anti bully/pro love message—Dancer, a former collegiate football player, owns QTown CrossFit in Quincy, Illinois, with his wife Jennifer Dancer where they have partnered with the Area 11 Special Olympics program to offer training to people with Down syndrome.and other special needs. LOVE EVERYONE!