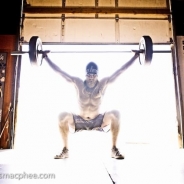 Taken from my teams website, goprobombsquad.com: "Born in New Jersey, Neil Amonson took to the skies as soon as he left home. Amonson entered the US Air Force right out of high school, serving in some of the most remote and dangerous parts of the world. Neil’s first taste of flight was a military freefall course—the rest, as they say, is history. After an exhilarating four years in special ops, Neil emerged a decorated combat veteran with a brilliant new career in entire range of airsports. He moved to Utah to be close to a range of legal BASE jumps, working at a therapeutic boarding school before joining GoPro on a full-time basis. When he’s not traveling, Utah’s seasons perfectly accommodate Neil’s sports: he paraglides, BASE jumps and skydives in the balmy mountain summertime, transitioning to big mountain skiing and speed flying when the snow arrives. Neil’s decade of parachuting experience spans the entire range of airsports—skydiving, BASE jumping, wingsuiting, paragliding and speedflying—so it’s not surprising that he’s one of the winningest pilots on the planet. Neil took third place in the 2009 World BASE Race, third place in the 2011 PRObase tracking race, second place in the Voss Extreme Sports Week accuracy competition, and third in the 2011 World BASE Race. One of the best-known faces in airsports, Neil has been featured in three nationally televised GoPro TV commercials and more than two million video hits on YouTube. The future is bright for Neil. Charismatic and connected, he’s currently working on several high-profile film projects and expanding the scope of the GoPro demonstration skydiving team. The focus of the latter is on the next generation of aerial enthusiasts: one of his current projects for the team involves skydiving into schools, where they talk to the kids about finding and pursuing their passions. Neil lives in Salt Lake City, UT. He is a certified air traffic controller, and holds a BS in Professional Aeronautics (with a minor in Security and Intelligence) from Embry Riddle Aeronautical University." .... and I <3 crossfit :-)