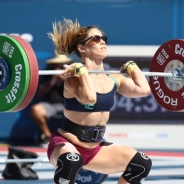 Michele Letendre is a six-time CrossFit Games veteran and a powerful force at the Canada East and East Regionals for as long. She has claimed one of Canada East’s two Games-qualifying spots since her first regional appearance in 2011, never falling below third at the combined East Regional. She finished four of her six Games appearances in the top 18, with a career-best finish of fourth in 2014, just one spot outside the podium. A former collegiate swimmer and national-level water-polo player, Letendre retired from competition after the 2016 season to focus on coaching at Deka CrossFit in Blainville, Quebec.