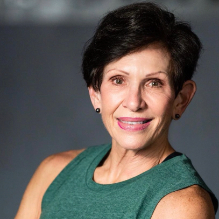 Lidia Beer is a six-time CrossFit Games masters athlete. Beer started CrossFit in 2010 after years of endurance running—she has completed 13 marathons—and qualified for her first Games appearance just one year later. She competed in the 55-59 Division at the Games from 2011-2014, finishing in the top 10 in three out of four appearances. After missing Games qualification in 2015, Beer made her comeback in 2016 with a career-best finish of second in the 60+ Division. A director of project management for AT&T by day, Beer is also a trainer at CrossFit Isorropia in Carrollton, Texas.