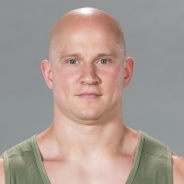 Ben Stoneberg is a five-time CrossFit Games athlete (four individual, one team). Dubbed “Stone-Cold Stoneberg” by announcers at the 2014 North West Regional for his stoic demeanor—he rarely shows discomfort and sometimes trains in silence—after taking 20th in his first Games appearance in 2011, he helped team CrossFit Intensify take 14th at the 2012 Reebok CrossFit Games. Stoneberg returned to the individual competition in in 2013, returning each year since with the exception of 2015, when he was sidelined by a back injury. A trainer at CrossFit Intensify, Stoneberg’s career best CrossFit Games finish was ninth in 2014.