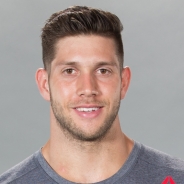 After three years of experience at the regional level, Lukas Esslinger made his CrossFit Games debut in 2016 with a 21st-place finish. After starting CrossFit in 2011, he took 44th in his first regional appearance at the 2012 Europe Regional.The next year, he moved to the U.S. to study English, helping CrossFit Invictus win the Southern California Regional, though he did not compete with the team at the Games. The next three years brought stark improvement for Esslinger, who jumped to sixth at the 2014 Europe Regional and second in 2016 at the Meridian Regional (his college-exam schedule prevented him from competing in 2015). Esslinger is a finance student at Zürich University and a trainer at CrossFit Kreis 9 in Zürich, Switzerland.