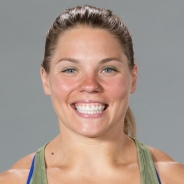 Sheila Barden, a two-time individual CrossFit Games competitor, has been a top-10 athlete at the North East, North Central and Central Regionals since 2013. After she took 25th in her debut CrossFit Games appearance in 2014, she missed qualification in 2015 by just one place. Known for her wide smile and positive attitude, Barden made her comeback in 2016, winning the Central Regional and going on to take 34th at the 2016 Reebok CrossFit Games, where at five feet, she was the shortest female individual athlete. Barden recently moved to Texas to join a Super Team after having full rotator cuff surgery in June 2017.