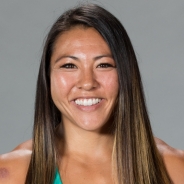 Jamie Hagiya has been a formidable force at the Southern California and California Regionals since 2013, but it wasn’t until 2016 that she made her CrossFit Games debut. After back-to-back fifth-place regional finishes in 2013 and 2014, training time lost due to an Achilles tear in June 2014 set her back to 20th at the California Regional in 2015. Determined to make it to the Games at least once in her career, she pressed on. She was rewarded with a Games-qualifying regional finish in 2016, going on to take 18th at the Games. A former professional basketball player in Greece and Spain, Hagiya owns Torrance CrossFit in California.