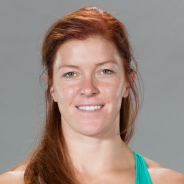 Three-time CrossFit Games veteran Emily Abbott has been a dominant force in Canada West since 2014. A former collegiate basketball player—she captained the University of Windsor Lancers to two national championships—Abbott started CrossFit in 2012. She won the Canada West Regional in 2014, her first regional appearance, and has never finished outside the top two at the regional level. At the Games, she has finished in the top half of the field for two of her three appearances, with a career-best finish of eighth in 2015. Abbott coaches Crossfit classes in Calgary, Alberta amongst various other side hustles.