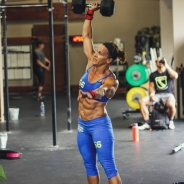 Tonia Osborne is a three-time CrossFit Games masters athlete. She made her Games debut with a 10th-place finish in the 40-44 Division in 2014, improving to fifth in 2015. After advancing to the 45-49 Division in 2016, she took second in both the Open and the Masters Qualifier, finishing the season with a career-best podium finish of third at the 2016 Reebok CrossFit Games. In 2017 she finished again on the podium in 3rd place. Before she became a masters athlete, Osborne was a longstanding regional-level athlete, competing on a team from 2011-2014 at the Southern California Regional. A former gymnast, Osborne also competed as an individual at the 2015 California Regional. Tonia is a wife, mother of 2 and works full time as a Connectivity Account Manager at an Avionics company.