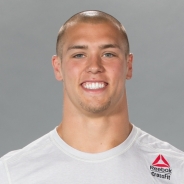 Five-time individual CrossFit Games veteran Cole Sager made waves when he took 13th at the 2013 North West Regional just four months after he started CrossFit. One year later, he won the North West Regional, going on to take 17th in his debut CrossFit Games appearance. He has only improved since then, taking seventh at the Games in 2015 and fifth in 2016, just two spots shy of the podium. A former collegiate football player at the University of Washington, Sager now trains as a full time CrossFit athlete out of his garage in Spokane, WA. YouTube.com/ColeSager Social: @colesager35