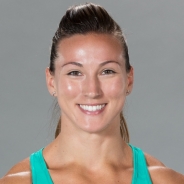 Alea Helmick made her CrossFit Games debut in 2016 with four top-10 event finishes—including a second-place finish in Suicide Sprint—for 26th overall. Though she was a rookie at the Games, she’s been a top-10 Atlantic and Mid Atlantic Regional athlete since her first regional appearance in 2013, when she missed qualification by one spot after less than a year of CrossFit. A former collegiate track-and-field athlete, Helmick is a fifth-grade teacher by day and owns CrossFit Revamped in Columbia, Maryland, with her husband Gary Helmick, a two-time CrossFit Games athlete (2013, 2016).