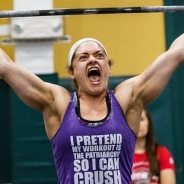 I grew up competing gymnastics. In college I discovered racquetball. I became president of my school's racquetball team, leading it in years when it took several national titles. After college, I continued to compete at racquetball. I ran a lot to stay in shape, but didn't know the first thing about lifting weights. A friend introduced me to CrossFit, which I initially started to get in better shape for racquetball. I fell in love with the sport and quickly became obsessed. Originally from Massachusetts, my first CrossFit box was CrossFit Worcester. I moved within the region in 2014, and started to compete with CrossFit Resilience on the team at the 2015 CrossFit East Regional. At the end of the summer I moved to Washington, DC to be with my boyfriend (we started dating the weekend of Regionals in 2015). With the support of the amazing team at CrossFit Balance I was able to make the jump from a team to an individual competitor. When I started doing CrossFit, I was working as an engineer. I have a degree in Chemical Engineering and a minor in mathematics. CrossFit really changed my life, it helped me to focus on what really matter to me. I got sick of the cubicle life and took a job as the Director of Dance and Gymnastics at a YMCA. Now, I work as a life coach as well as the Assistant CrossFit Director at CrossFit Balance.