You could hear a text come in on a phone across the Velodrome before almost 100 Concept2 rowers started hissing as the fittest athletes in the world started the second and third events of the first day of competition.

With 21,097 meters in front of them and two scoring opportunities, athletes had to decide where to invest their energy. Pulling too hard in the first 2K could cost an athlete dearly in the next 19,000, but coasting early seemed a similarly poor strategy.

Giant scoreboards plotted the progress of the leading ergs, and early on it was burly Jason Khalipa at the top of the list. Two minutes in, the 2008 champ was 17 meters ahead of the field pulling a 1:35 500-meter split. Khalipa never relented even if he slowed slightly, and he was more than 50 meters ahead at one point.

Coming to a full and deliberate stop at the end of each stroke, Khalipa took the 2K in 6:21 and immediately dropped his pace to about 2:03 for a bit of recovery as he settled in for more than an hour of work at a clip of about 1:52. 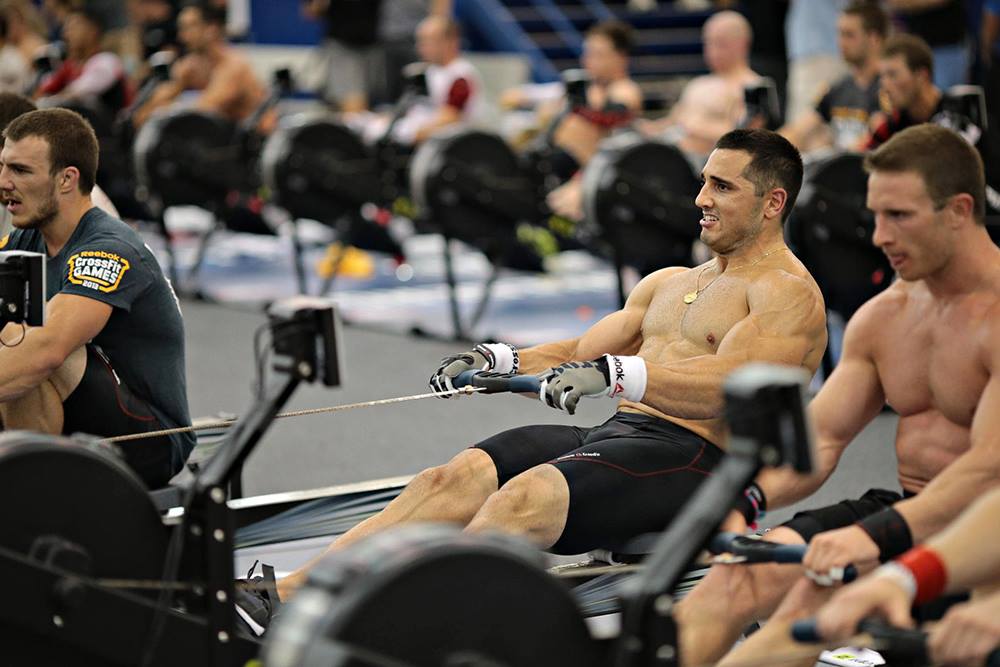 For the women, Olympic gold-medalist (sailing) Anna Tunnicliffe went out to an early lead before being tracked down by several athletes. She was about 18 meters ahead, but started to fade and was passed by Sam Briggs, Kaleena Ladeairous and Alessandra Pichelli.

Briggs and Ladeairous pulled hard right to the 2K marked and finished in a dead tie, while Pichelli took third.

All three maintained their placings with 15,000 meters to go, though Briggs and Ladeairous were more than 100 meters ahead of Pichelli due to 500-meter splits under 2:10.

As the athletes dug in for the long haul, all sorts of different techniques showed up. Lucas Parker stopped at times and shifted uncomfortably in the saddle for up to 15 seconds, while Daniel Tyminski bowed his head at the catch and threw it back at the finish as if he was at a metal show. Some athletes let their legs rest and pulled a few strokes with arms only. Albert-Dominic Larouche and Lacee Kovacs occasionally cracked alternating cheeks on several strokes, perhaps to give one glute a brief rest.

Many athletes strapped water packs to backs, while others took in fluids while rowing with one hand. A host of snacks—including gummy treats—littered the floor below the rowers, which athletes stuffing sustenance down when needed. Brandon Swan rowed about five strokes with an entire snack bar hanging out of his mouth.

At the same point for the women, Sam Briggs was pulling away from the field. She had 126 meters on Ladeairous and 231 meters on Margaux Alvarez, and she was solid at 2:04 500-meter splits.

Things started to get rough and slightly weird in the late stages. Tyminski went to a splayed-leg frog pull after getting off the rower to go get a bottle of water. Daniel Petro stopped moving his torso at all and sat almost completely upright for the entire stroke.

For a brief period, Khalipa started shaking his head from side to side at the end of each pull. With less than 6,000 to go, he was nodding. But he wasn’t slowing down. His 1:53 pace held, and he was almost 300 meters ahead of Allen with a paltry 5K to go.

Briggs had slowed her pace slightly to 2:08, but she was still over 100 meters ahead of anyone else.

With less than 2K to go, Khalipa was still cruising and hadn’t changed pace. He did, however, find himself way in front of training partner Neal Maddox, who had passed Allen to sit in second. But Khalipa was almost 400 meters ahead with 1K on the monitor, and when it hit zero, he was smiling after taking first in both events—as well as $6,000 for two event wins.

“Legs a little shaky,” Khalipa said after he got off the rower.

He added: ‘I’m happy. I’m very happy with my performance.”

His plan was to row 2K at 90 percent, see who was near him and then, “do whatever I needed to do.”

“My plan was to hit the 2K at around 95 percent,” Briggs said minutes after finishing the event. “I didn’t think I’d win the 2K because there’s bigger girls.”

After that, she took a swig of her carbohydrate drink mixed with water every 5,000 meters.

Although she seemed close to regaining her breath, Briggs said standing up from the rower immediately after finishing 21,097 wasn’t easy.