In 2018, after participating in the Open since its inception in 2011, my affiliate CrossFit Roots debuted an intramural Open, an alternative way of running the Open that originated with Chris Cooper of CrossFit Catalyst and Two-Brain Business. I’d seen several affiliate owners do this over the years, and I wanted to try it out.

After a long call with CrossFit Catacombs owner Tracie Holcomb on how she ran hers, I was sold. I had been looking for a way to get more of our members excited and involved with what I believe to be one of the most meaningful aspects of being a CrossFit athlete: participating in (and completing) the CrossFit Open.

Fast-forward to 2022, and we’re about to offer our fourth intramural Open at Roots. Whether you just opened your doors or you’re a 10-year affiliate, offering an intramural Open at your gym could be the thing you need to light a fire for your entire community. 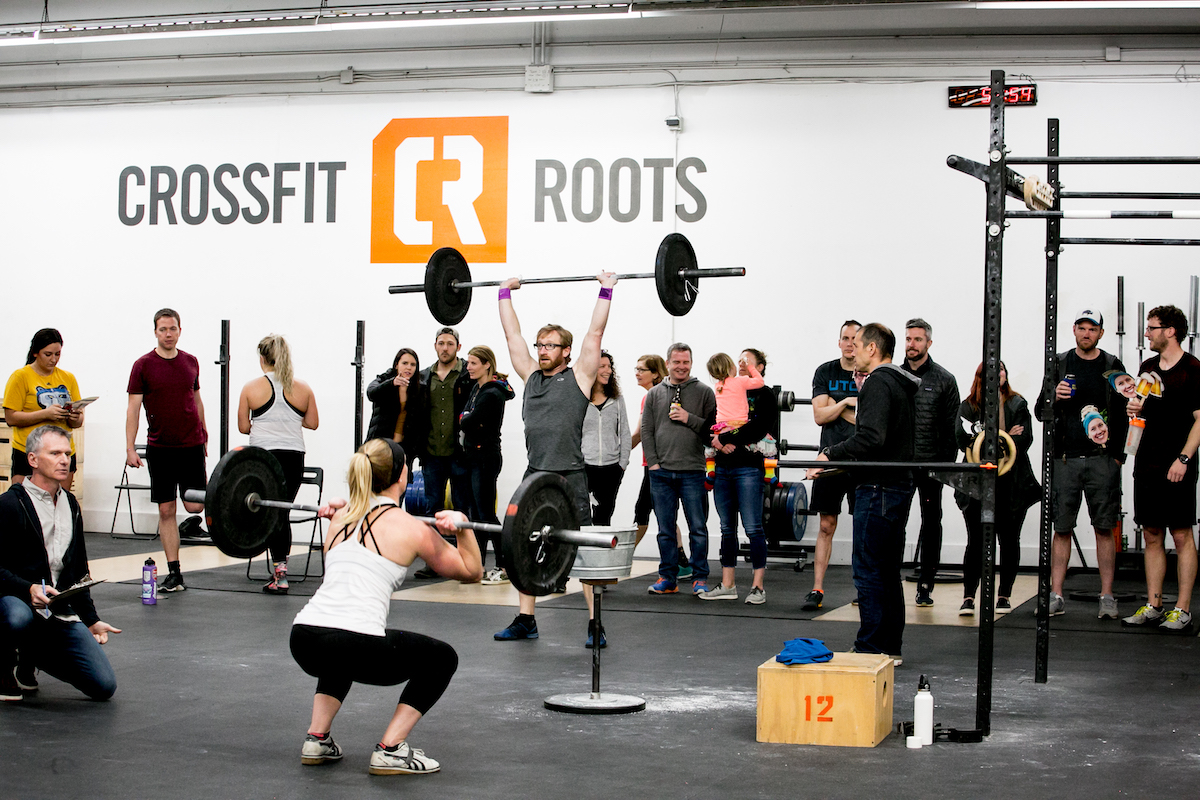 What Is an Intramural Open?

The concept of the intramural Open is simple: It’s a team competition within your affiliate that uses the Open workouts as the centerpiece of the competition. Additionally, harnessing my summer swim league coaching past and my coaching staff’s fun and goofy side, additional “team tests” and opportunities to earn points are layered on top of the three weeks of Open workouts.

For example, each week, individuals can earn points for their team by completing simple tasks such as passing the Judges Course, logging their Open workout score, and wearing their team colors to class. Teams are also charged with a weekly gauntlet where they volunteer one teammate to compete in a “one-off challenge,” such as a chili cook-off, Lego building contest, or CrossFit history test. And finally, teams score points for athlete performance in men’s and women’s Rx’d and scaled workout divisions. 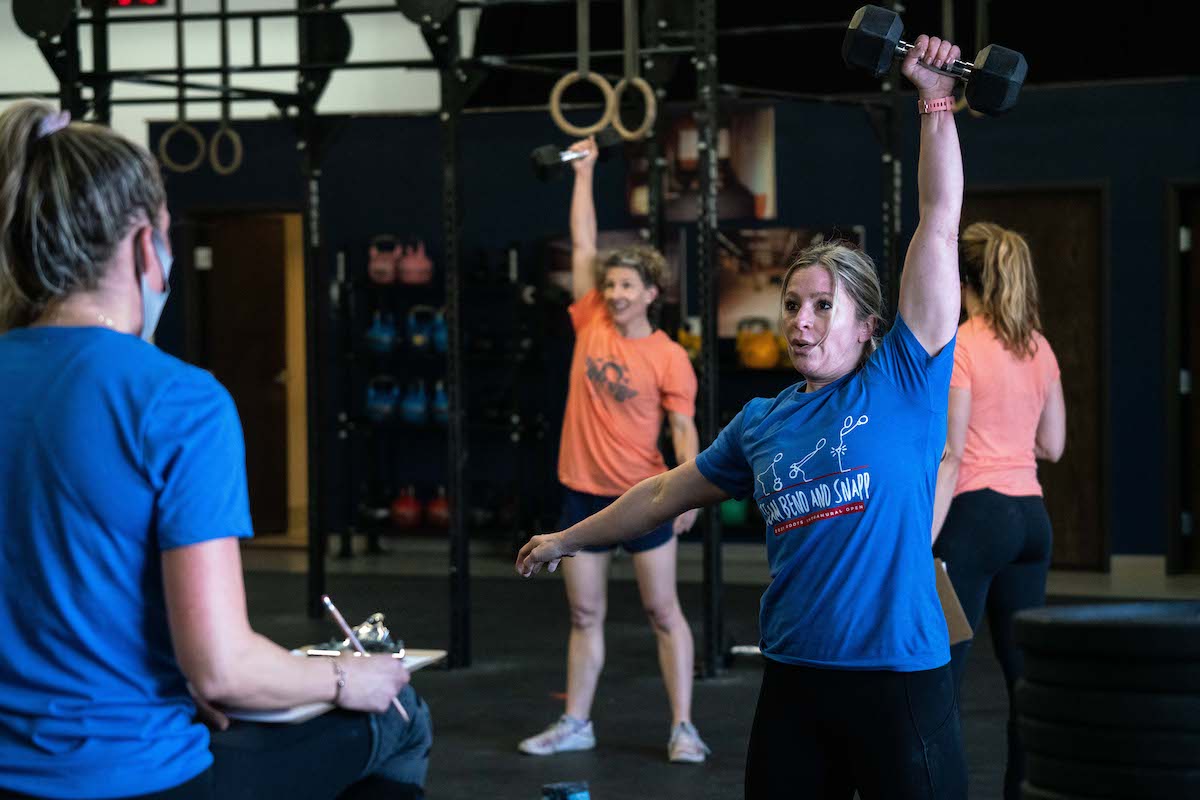 Why Consider Doing an Intramural Open?

There are many reasons why an intramural Open might be a great fit for your affiliate. From providing an even larger draw for participation to enhanced scoring options and allowing more people to have “their moment” at the shop, the intramural Open takes all the incredible aspects of the Open and magnifies them.

The intramural Open brings our community together on another level, because it gets another subset of our affiliate excited about the Open. I’ll even admit, despite my sheer joy and love for the Open, some of my athletes are just not buying it. Despite my laundry list of reasons why the Open will make you a better person and change your life for the coming year, apprehension abounds. Enter the intramural Open. Feeling like part of a team with other athletes in the gym sometimes connects the dots for people in a way that the worldwide leaderboard doesn't. 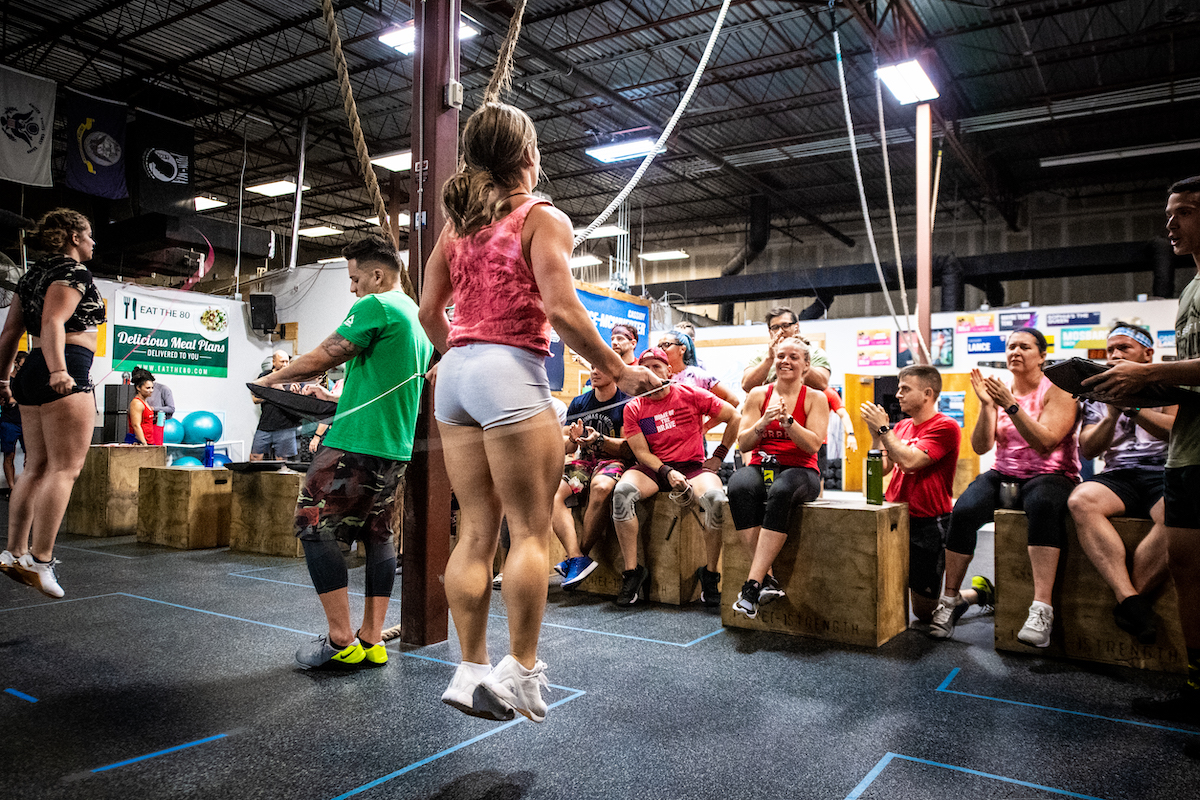 How Does It Work?

The intramural Open uses the scoring of the Open workouts as its foundation. Then, we create an additional scoring layer that makes it possible for everyone to earn points, not just those athletes who can Rx every workout.

No, it’s not an everybody-gets-a-trophy scoring system. It’s an everybody-has-to-show-up-and-work-hard scoring system. With the scoring options below, no team member can “phone it in” on a given week and think, “Oh, well, my score won’t count anyway.” We also offer additional scoring opportunities via weekly gauntlet challenges and opportunities for each individual to earn weekly points for their team. 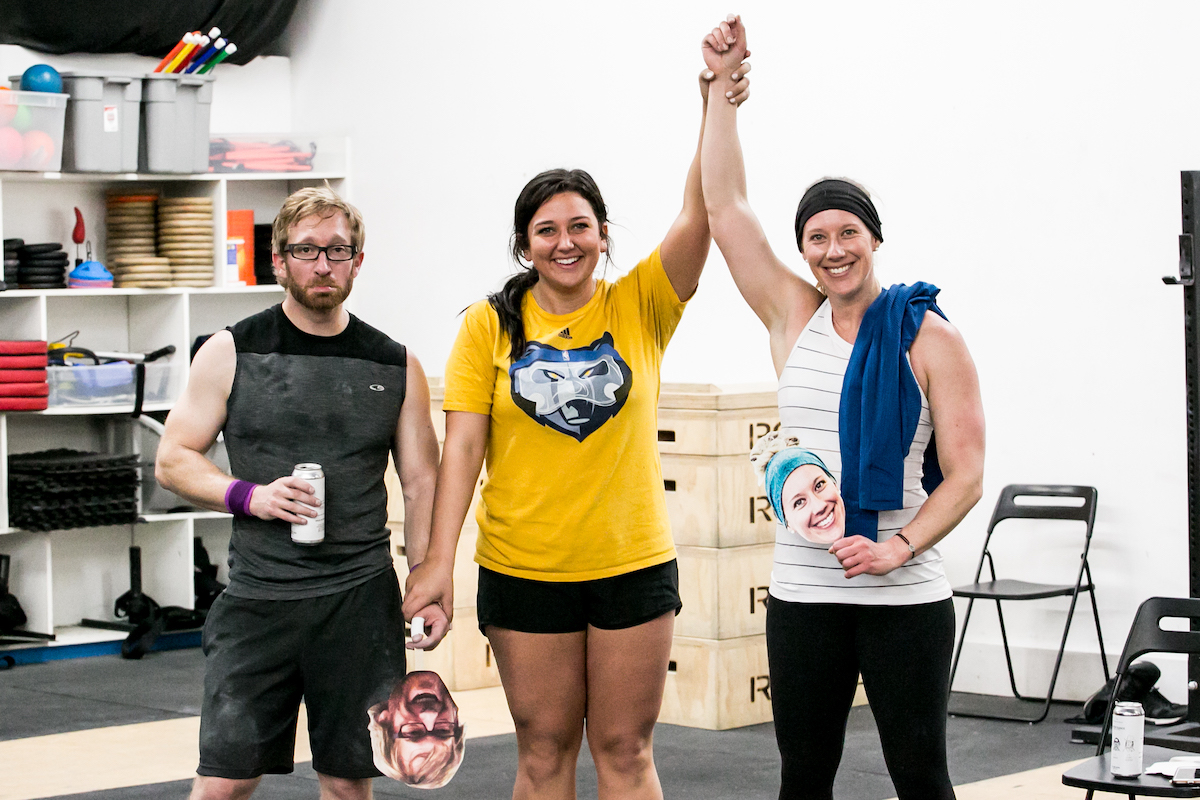 You can do this via a blog post, email to your members, signs in the gym, and reminders at the whiteboard. We recommend doing all four. Here’s a sample blog post.

Note: You will inevitably get this question: “I’d like to do the intramural Open, but I don’t want to sign up for the Open. Can I just do it without signing up?”

My answer to this is always no. First, we believe in commitment. You’re either in or out, and if you’re in and want to take part in any part of the Open at Roots, you sign up for the Open. Second, the Open is how we create and manage our roster, track scores, and tally points. Doing this separately and by hand would be ridiculous and lead to affiliate owner regret!

When it comes to selecting team captains, don’t navigate immediately to “the best” athletes at your gym. Start with the people who are CrossFit fanatics — those who are enthusiastic, a little crazy or silly, and who will work hard to involve everyone. Look for old camp counselors, Ultimate Frisbee folks, and fantasy football fanatics. If they happen to also be great athletes, awesome, but it’s definitely not a requirement.

We recommend filling three teams. We’ve had years with four, but we’ve learned that three teams works well to provide enough depth within each team.

Lastly, we try to select team captains from different class times. For example, last year our captains’ “home classes” were 6:30 a.m., 9:30 a.m., and 5 p.m. While this is not vital, it gives good visibility of the Open via the team captains at all class hours throughout the day.

There are various ways to do this. You could divvy up the teams on your own, but we find holding a draft is way more fun. And for anyone who is concerned about being picked last, yes, that’s going to happen. Someone will be picked last. That’s how drafts work. That being said, we often find that some of the lowest draft picks end up being the top team contributors each season, just like your fantasy football draft.

Using your games.crossfit.com affiliate team roster, you can create a list of everyone who is eligible to be drafted at your affiliate. Encourage your team captains to do some research and to think through how to draft a team with balanced fitness, skills, age, and talents. Last year, one of our captains created a detailed spreadsheet of each athlete’s performance, complete with stats and ranks, and they came to the draft as if it were the NFL!

Once teams have been drafted, the team captains take it from there. We provide each captain with the email list for their team and then the banter, trash talking, T-shirt ordering, and email chains start flying. It’s actually one of my favorite parts of the season, as I will inevitably spit out my coffee while reading some team email thread laughing at the banter.

As coaches, we stay out of this process.

Step 5: Decide on a Scoring Matrix

The last main component is to decide on a scoring matrix based on how many points each element is worth. There’s really no right or wrong way to do this, but we recommend doing it before the Open starts.

You will need scoring details for each points category. We put an emphasis on the Open scoring and individual points categories (they make up 80% of possible points). Gauntlet challenges make up the remaining 20%.

Each week, you’ll need to send out an email to the team captains announcing the week’s gauntlet challenge and other necessary details. For example, maybe the first gauntlet challenge is to complete a sudoku puzzle for time. Each team will then need to huddle with their team and figure out the best teammate to do the test!

After you have set your scoring, you’re ready for the announcement of 22.1! 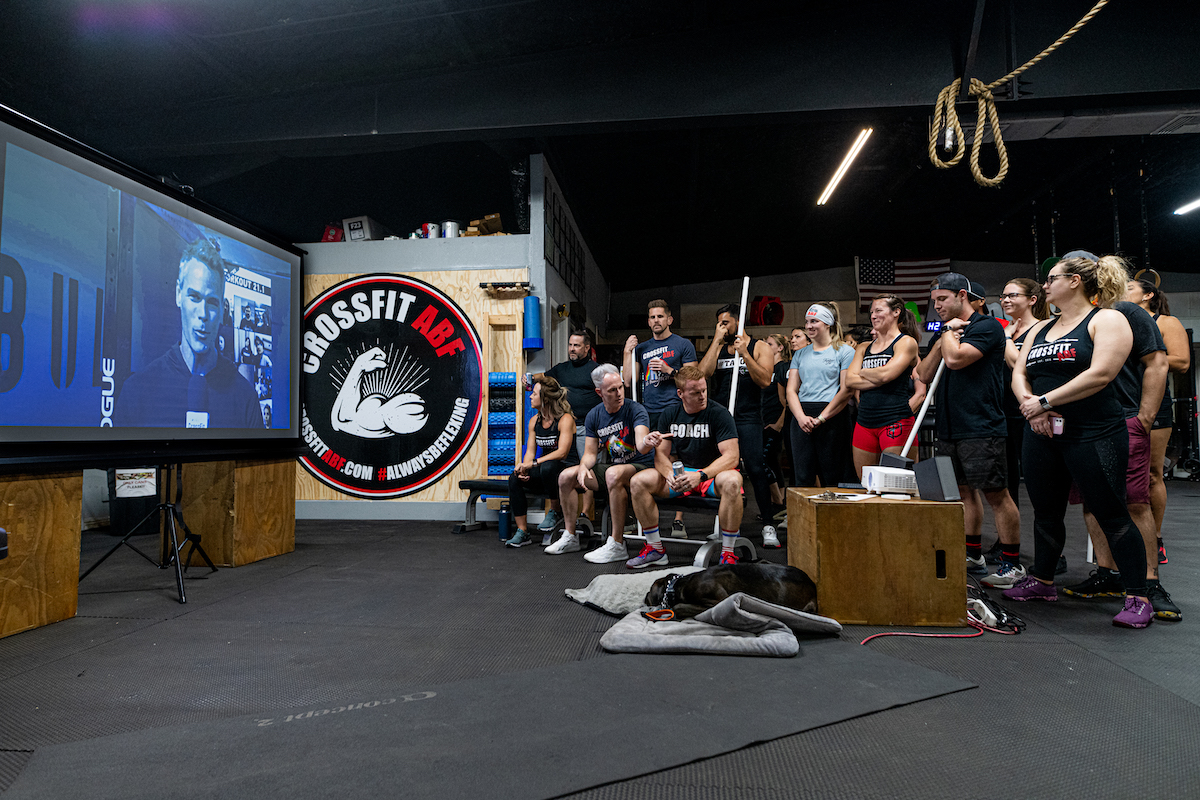 A Few Final Words of Advice

Finally, here are some odds and ends we’ve implemented along the way that have helped us run a successful intramural Open.

If you’ve never run an intramural Open at your gym, this year is a great time to start. Our members look forward to it every year, and it’s one of the best ways I know to make a strong community even stronger. If you have questions about getting yours up and running, follow @crossfitroots on Instagram and shoot us your questions on this post.

REGISTER FOR THE OPEN