They are ordinary teens with extraordinary fitness.

They take their driver’s test. They squat 500 lb. They go to homecoming. They fly above the rig. They do their homework. They walk upside down over obstacles.

All teenagers can scroll TikTok. But, how many can throw a barbell above their head that weighs more than their own body weight?

Fourty of the fittest teenagers in the world came to Madison, Wisconsin, this week to show the world just how strong the next generation can be. Some won their first event while others found gaps in their training. Some tested their skills while others tested their mind. They did it all before being considered legal adults.

Below are the 2022 NOBULL CrossFit Games winners for the teenage divisions.

The Fittest On EarthTM 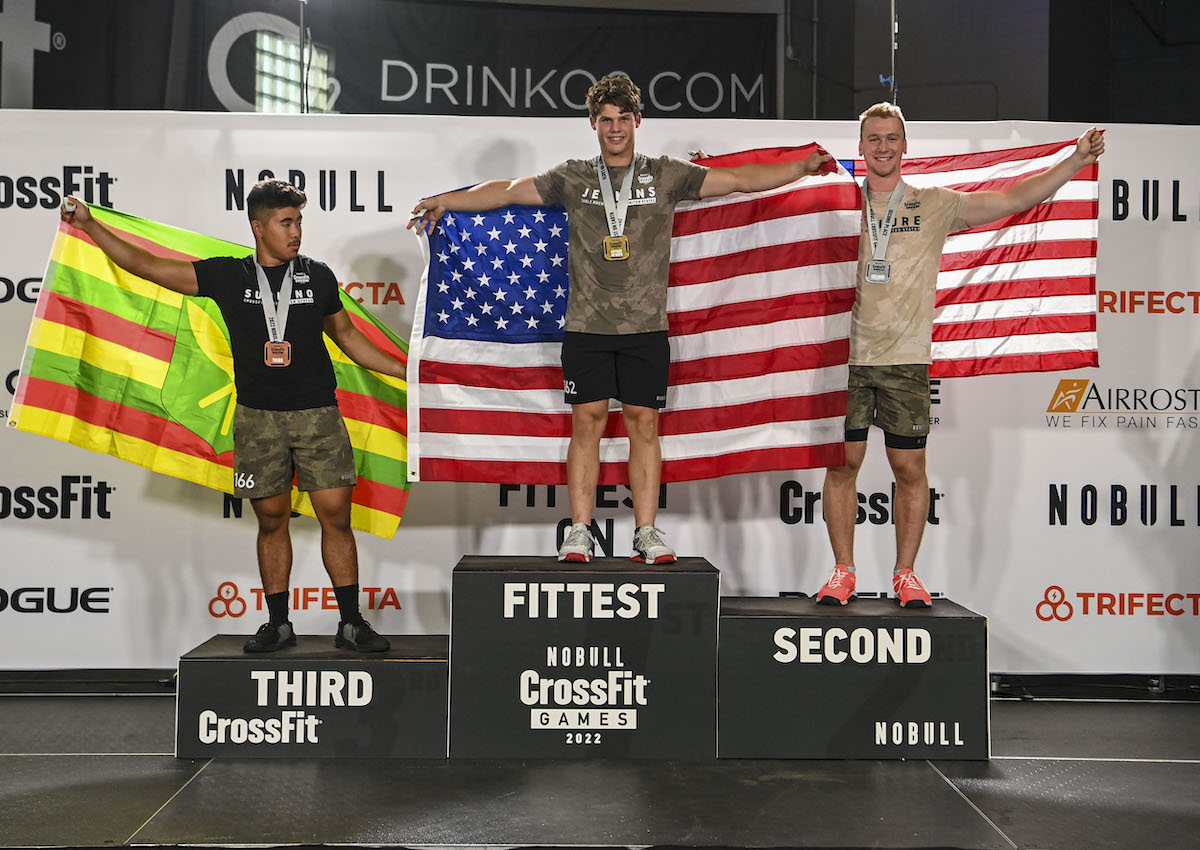 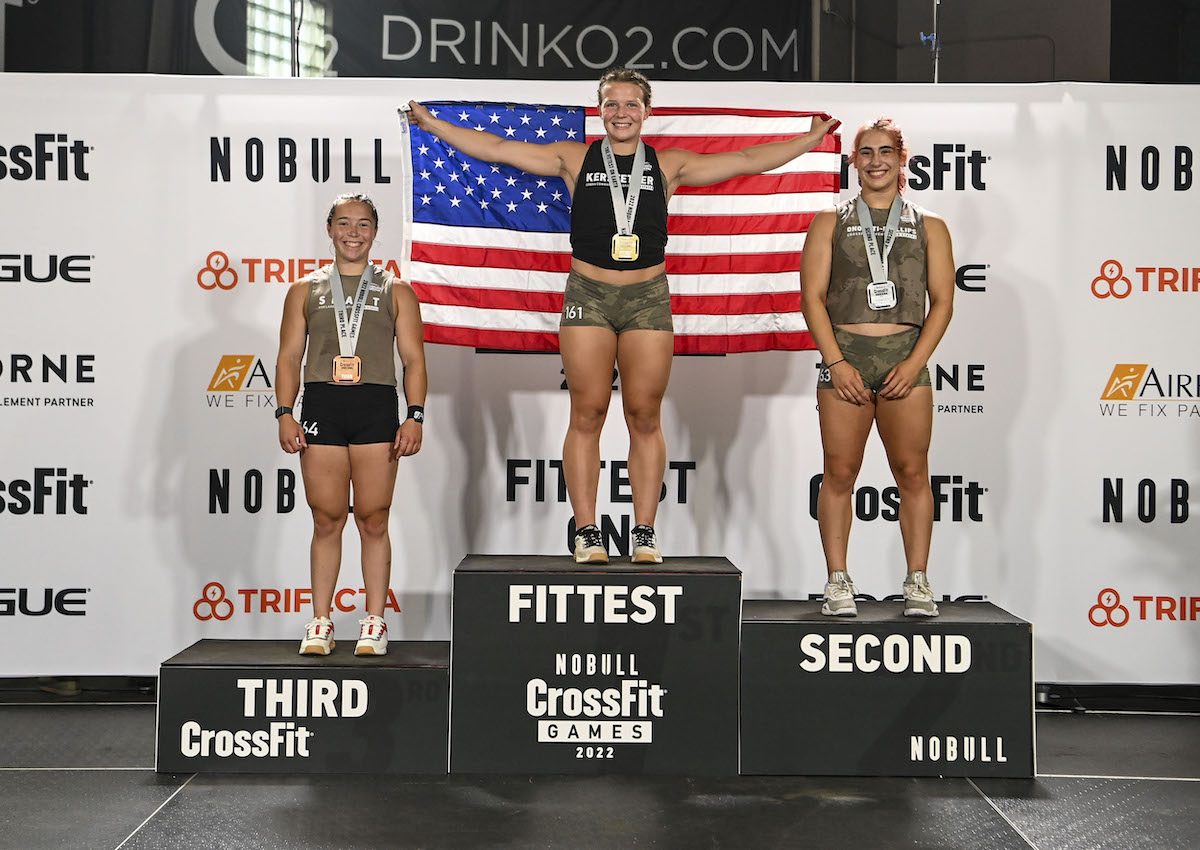 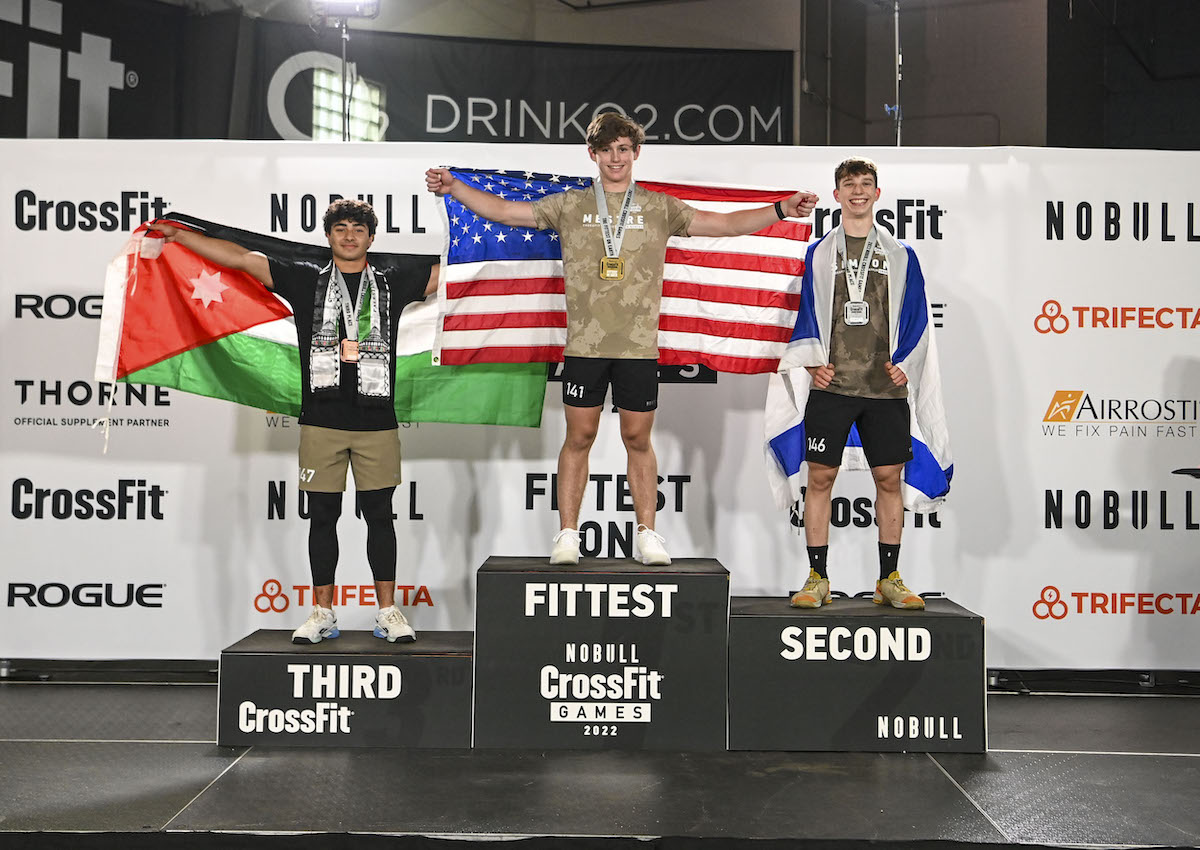 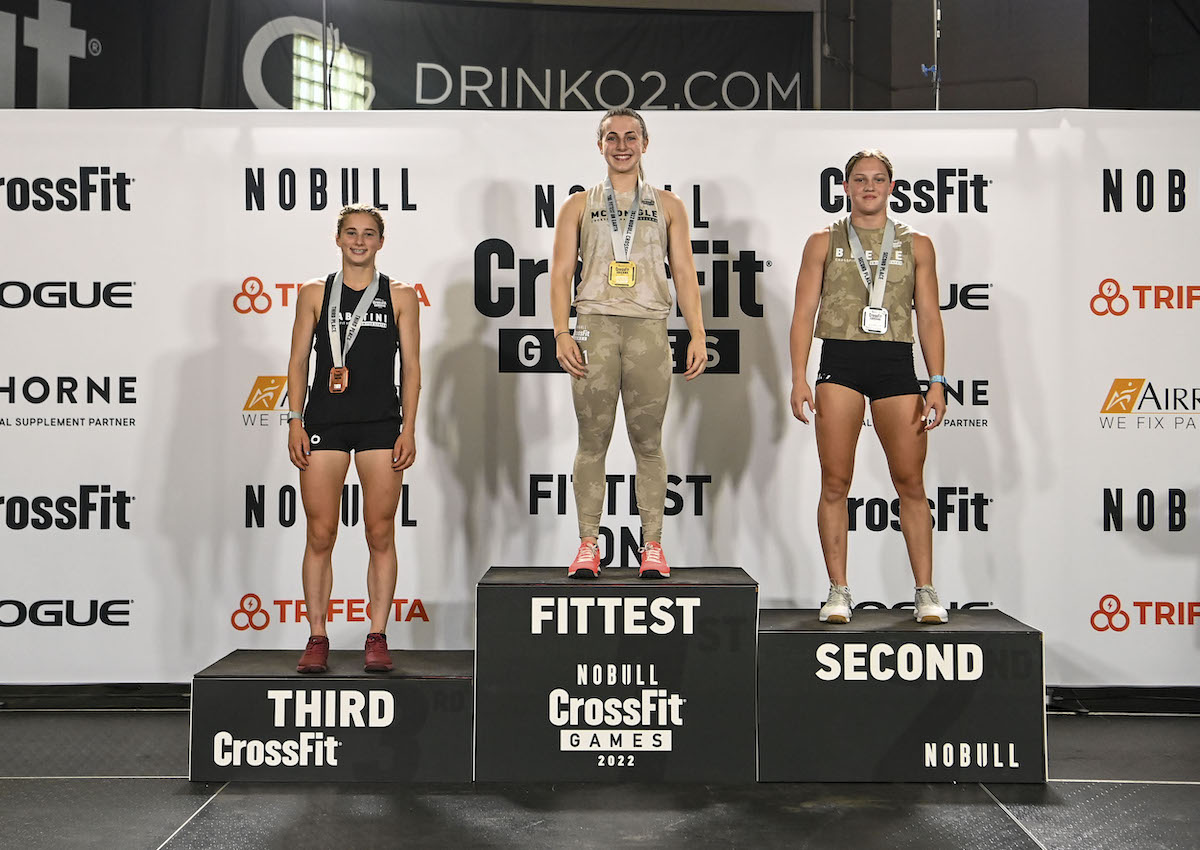 The teens entered the Coliseum at the Alliant Energy Center on Thursday after taxing their engines with running, rope climbs, and dumbbell shoulder-to-overheads in Three Ways Down. The teens would test their power output and strength under the lights in Event 2, Max Trio.

The final stage of the event tested a 1-rep-max front squat, and 15-year-old RJ Mestre set the standard high by achieving a 45-lb PR at 320. But he would still have some work to do if he wanted to level with the age group above him.

Six of the 10 boys on the floor in the 16-17 age group opened their front squats at or above 300 lb. Adding weight to the bar, plate by plate, Johan Roberts would even take a final shot, although unsuccessful, at over 425 lb. 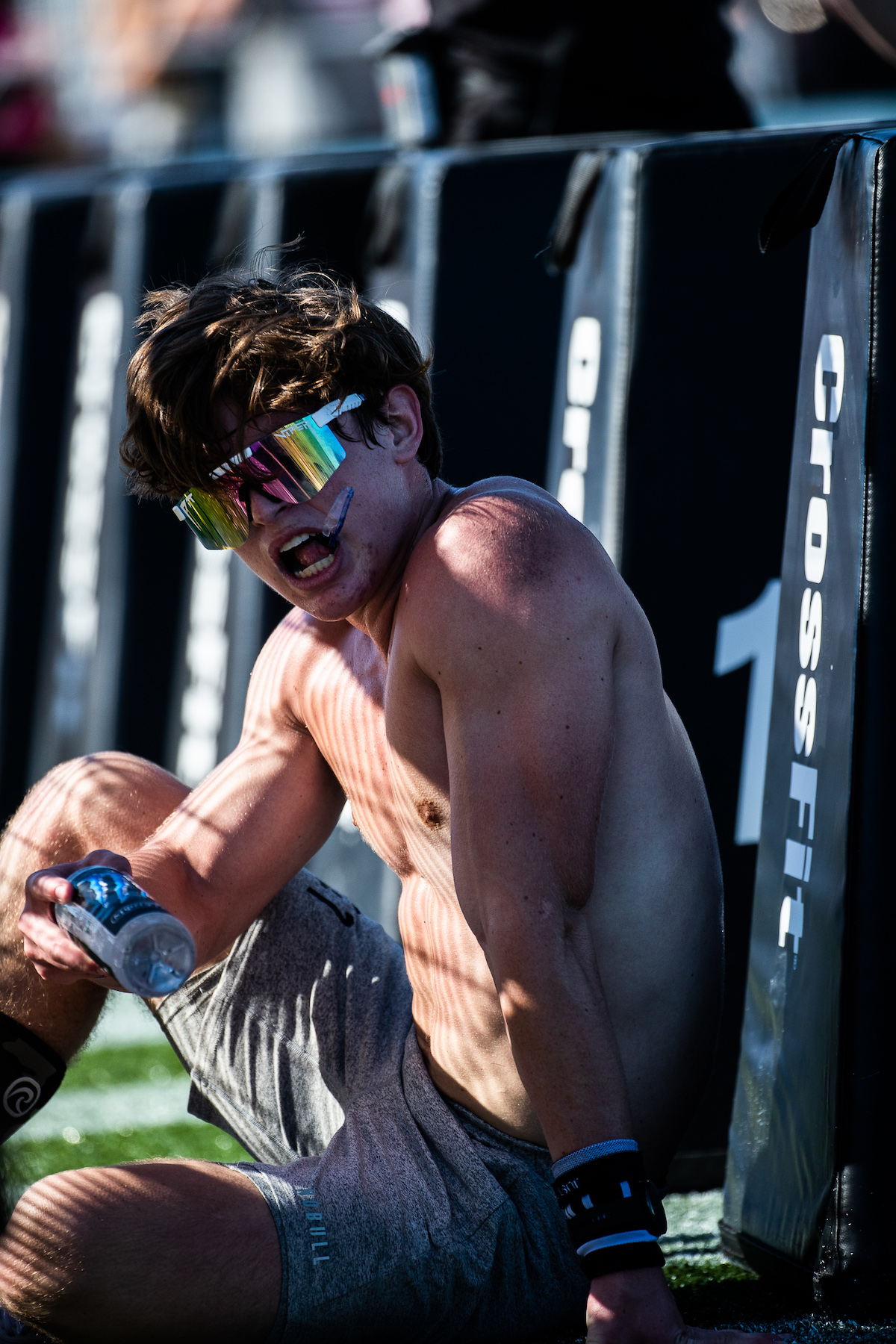 Diab Takes One from Mestre

The teens returned to the Coliseum later in the day where Mestre closest competitors, Tal Simson and Yousef Diab, trailed the leader by 40 points each. Mestre needed to look out for Diab in Skills Chipper.

Diab was the only teen in his division to take an event win from the teen at the top of the podium.

Diab narrowed the distance between him and Mestre on the handstand push-ups and GHD sit-ups. Knowing Diab was on his heels, Mestre got to the handstand walk first and kicked right up but failed his first try over the obstacle.

He saw his window of opportunity and took it. Sprinting through the handstand walk on his first try, Diab triggered the flashing lights in the Coliseum and took the win.

Mixing It Up with McGonigle

The muscle-ups in the first part of Event 5, Mixed Madness, would challenge a few athletes in the field but they were no problem for Lucy McGonigle.

McGonigle and Rylee Beebe were tied coming into the final event of the day. All eyes were on the two leaders to see who would have the point advantage heading into the last day of competition.

Although McGonigle would finish in second every round — she showed that consistency across the board would get her the event win.

Trista Smith is a level 8 gymnast, which is just two levels away from an elite ranking.

Smith flew through the parallel bars on each round, showing her comfort and excitement to be on gymnastics equipment. She was gaining ground on Kerstetter.

When Smith returned to the bars first for the final round, Kerstetter’s coach and former individual athlete Jason Heppner knew Smith would take the victory. He turned to Smith’s coaching team to share a quick high five as a nod to her performance in the battle with Kerstetter. 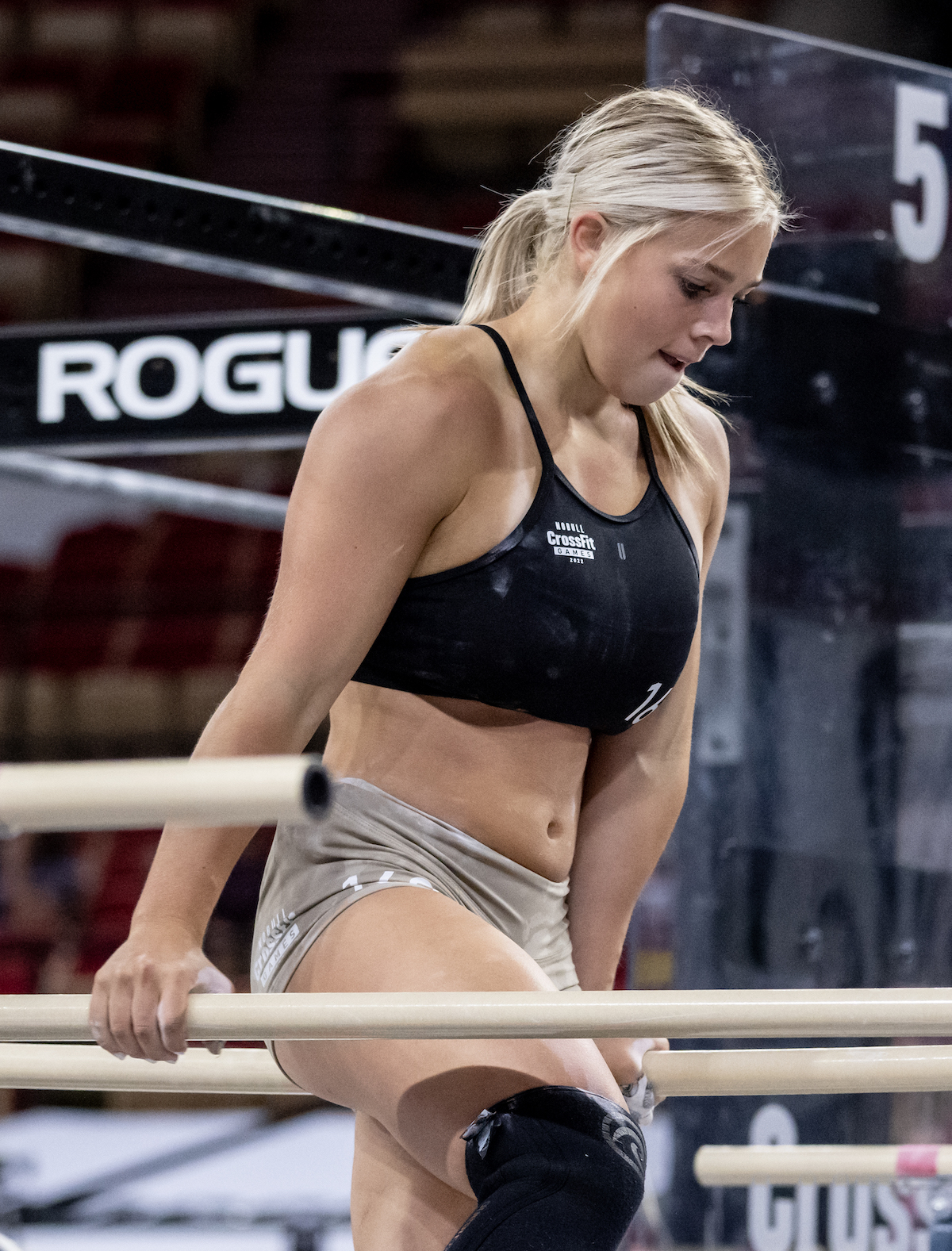 Jenkins returned to Madison in 2022 hoping for another year of back-to-back event wins, but entering a new age group, Jenkins would be the youngest in the field.

The only numbers that mattered were on the leaderboard. Jenkins performances stood out on the field and in the pool.

Swimming competitively for over half his life, he moved effortlessly in the water and turned on the gas on the ski erg. Had he been competing in the individual men's field, he would have tied Alexander Caron for 21st in the event, nearly guaranteeing the top spot on the Boys' 16-17 podium before the final event.

When scanning the field in Carrying Karen, you would have thought Kerstetter’s wall-ball target was shorter and the Jerry bags were lighter.

They weren’t lower or lighter. She was just fitter.

In the Girls’ 16-17 division, Olivia Kerstetter showed the consistency it takes to be a champion and the tenacity it takes to finish a competition stronger than you started. Although she finished the first four events with second and third-place finishes, Kerstetter would continue to improve in the final four events, capping the weekend with her third event win in Final Sprint. 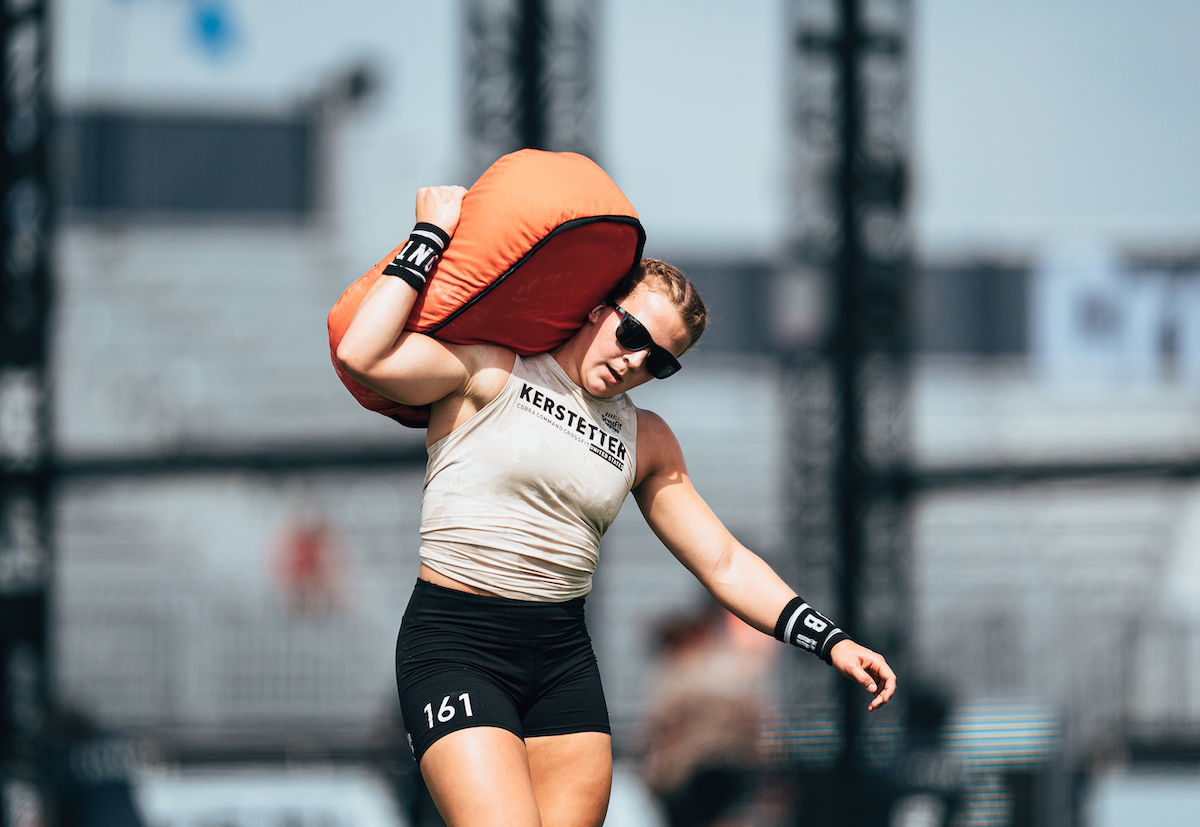 On Saturday, teens made their way to the water. Strengths would shine and weaknesses would be exposed.

Jadzia Onorati-Phillips made her move in the pool. She had her first event win, banking 124 calories on the ski erg, enough to tie individual athlete Danielle Brandon, who Onorati-Phillips said is someone she looks up to in the sport.

The teens had less than five minutes to hold their position or snatch another’s. Onorati-Phillips took control of her fate with a third-place finish to secure second on the leaderboard.

Meanwhile, the battle continued between two athletes that have been going head-to-head throughout the competition — Sophie Shaft and Smith. Shaft would edge out Smith in the last event by 23 seconds and seal her spot on the podium by just 10 points.

Medals Up for the Taking

Many athletes were in the mix for the second and third podium spots in the Girls’ 14-15 division. Caroline Sabatini would make a last-minute charge to the podium during the final event. After a tough 10th-place finish in Rinse ‘N’ Repeat, she rebounded to take fourth in Final Sprint, making up the 20-point deficit behind Reese Littlewood going into the event and grabbing the bronze medal.