Stage 1 of the 2020 Reebok CrossFit Games is in the books. Thirty men and 30 women competed from their local affiliates and home gyms around the world.

The athletes were tasked with taking on seven classic benchmark-inspired workouts — but with heavier weights, higher reps, and other twists. And whereas the usual CrossFit Games format allows competitors to compete alongside each other in real time, these events truly captured max efforts because the athletes weren't able to compare themselves to their fellow competitors. They had no idea when they could let off the gas.

Thirty men and women entered the field of battle on Friday. Here are the last five standing on each side. 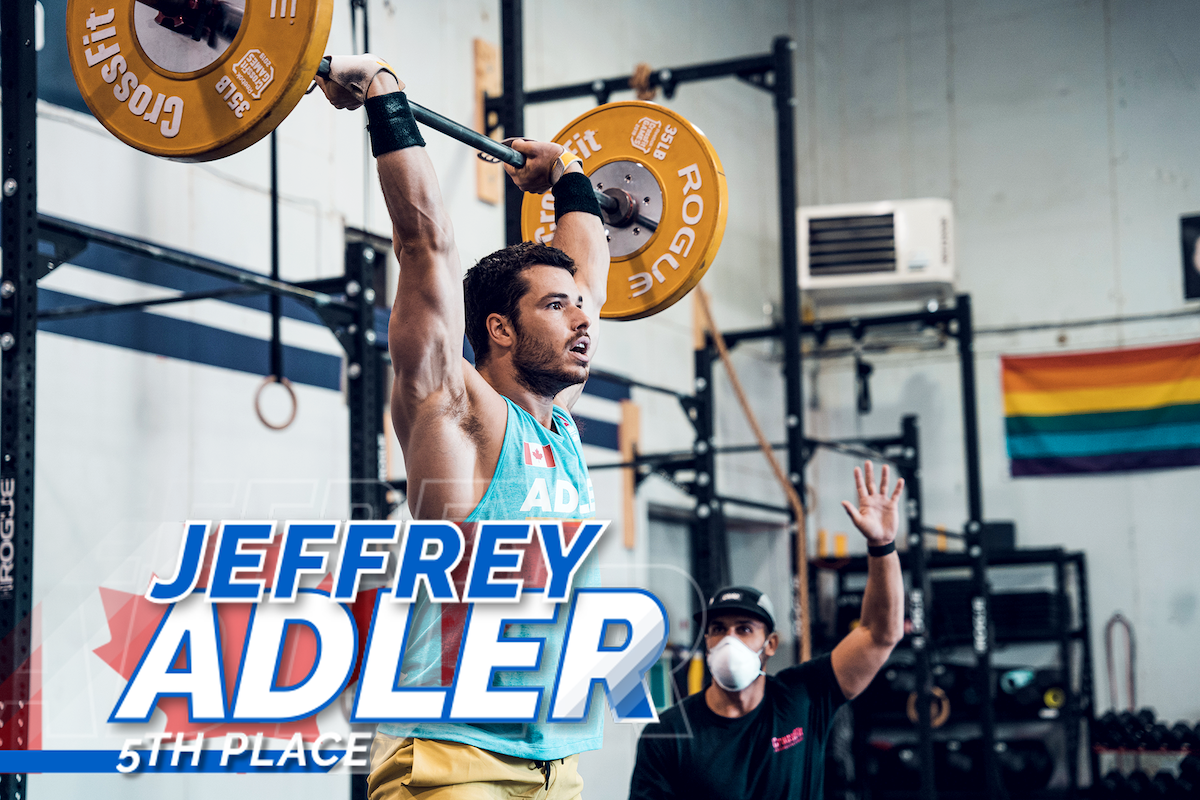 Jeffrey Adler had a solid first showing in Event 1’s Friendly Fran. The 26-year-old from Montreal, Quebec, strung together thrusters and chest-to-bar pull-ups completely unbroken in the first two rounds, borrowing a page from Rich Froning’s playbook and occasionally pausing for “rest” at the top of the thruster. After the final pull-up rep, Adler let go of the bar and fell to the floor in the writhing pain so familiar to those who make friends with Fran. The other people watching Adler’s performance from the perimeter of the competition floor at CrossFit Wonderland started shouting, as he hadn’t crossed the finish line to stop the clock. Adler sprung into action to finish the event in 4:00 flat, but the momentary lapse may have cost him a few places on the leaderboard, since a mere two seconds separated sixth from third place.

This is Adler’s second year at the CrossFit Games. Last year he walked away with 33rd place, cut after four events. This year he’s hungry.

He took fifth in the worldwide Open and became the Fittest Man in Canada this year.

Over the weekend, he continued to separate himself from his fellow competitors, earning four top-10 event finishes. His best performances were sixth-place finishes in Nasty Nancy and Friendly Fran. His worst performances happened in Handstand Hold (27th) and Damn Diane (15th), so he may have some ground to make up in his gymnastics game — or he may have just been suffering from the cumulative effects of performing multiple workouts at maximal intensity over two days. Either way, we look forward to seeing what the future holds for him in Stage 2. 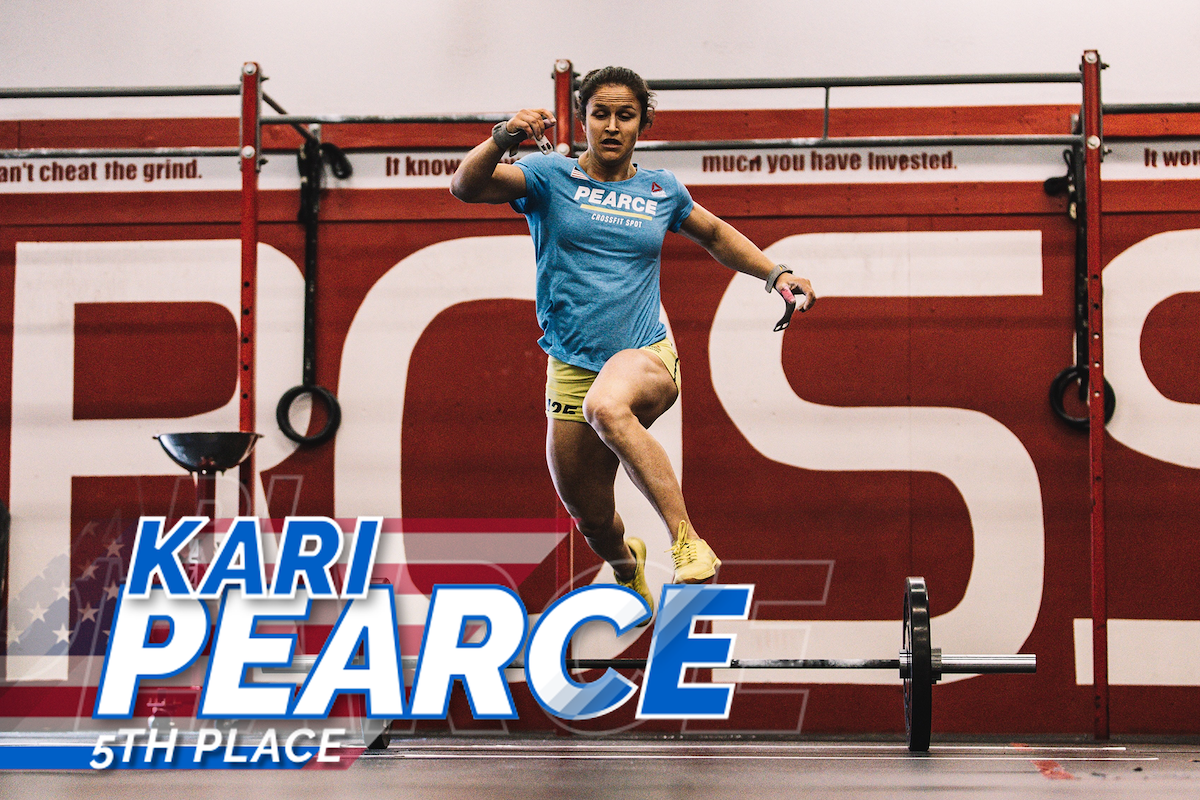 Like the rest of us, Kari Pearce watched with anxious anticipation as the results rolled in during the final Road to the Ranch episode of the weekend. She knew she had to make up some points in the last event, so when the leaderboard for Awful Annie showed up on her screen and she saw seven athletes ahead of her, she thought her Games were over.

But then she heard the cheers. Her supporters had erupted in celebration because when the final points were tallied, the overall leaderboard showed she had edged out Kristin Holte in sixth place by two points. She was in the top five.

Though Pearce bobbled a bit during 1,000-M Row (19th) and 1RM Front Squat (22nd), her performances in other events more than made up for it. No surprises here, but her best events were those with gymnastic elements. The former Big Ten collegiate gymnast took fourth in Damn Diane with a time of 2:40 and second place in Handstand Hold, finishing with 2:13 on the clock.

Pearce has landed in the top 10 in the worldwide Open three times. This year she won.

This is her sixth trip to the Games and will be her fifth time in a row landing within the top 10. Her best overall Games performances are the two fifth-place finishes she earned in 2016 and 2019. This year she’s at least matched that.

Though she has yet to podium at the Games, she’s looking to fix that next month in Aromas. 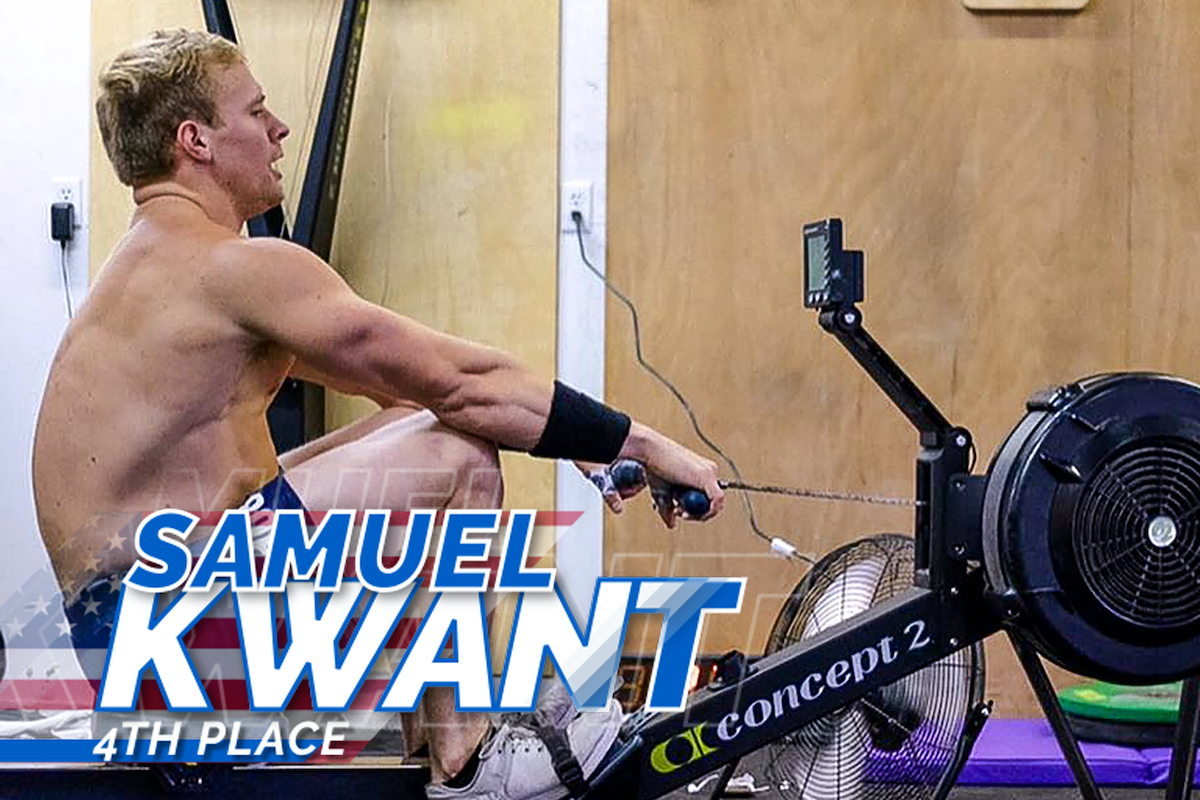 “You need to keep your eyes on this young man,” said Morning Chalk Up’s Tommy Marquez when talking about Samuel Kwant earlier this month. Kwant was Marquez’s final selection as he named the dark horse competitors to watch this season.

At 5’11’’ and 200 lb., Kwant is the largest competitor in the final five. The former cross country runner has been to the Games four times since his first trip in 2016. That year, he was the youngest individual — 20 years old — on the men’s side. His best finish was in 2019, when he took 13th, but he’s already secured at least fifth this year.

In Stage 1, he accrued five top-10 event finishes. His best events were 1,000-M Row and Handstand Hold. He took third in both.

During the pandemic, Kwant has been spending time at home with his wife, Alyse, newborn son Layton, and dog Nara. And if his performance this weekend is any indication, a fair amount of that time has been spent in his home gym. He’ll get the chance to put all that hard work to use again next month as he makes his way to The Ranch. 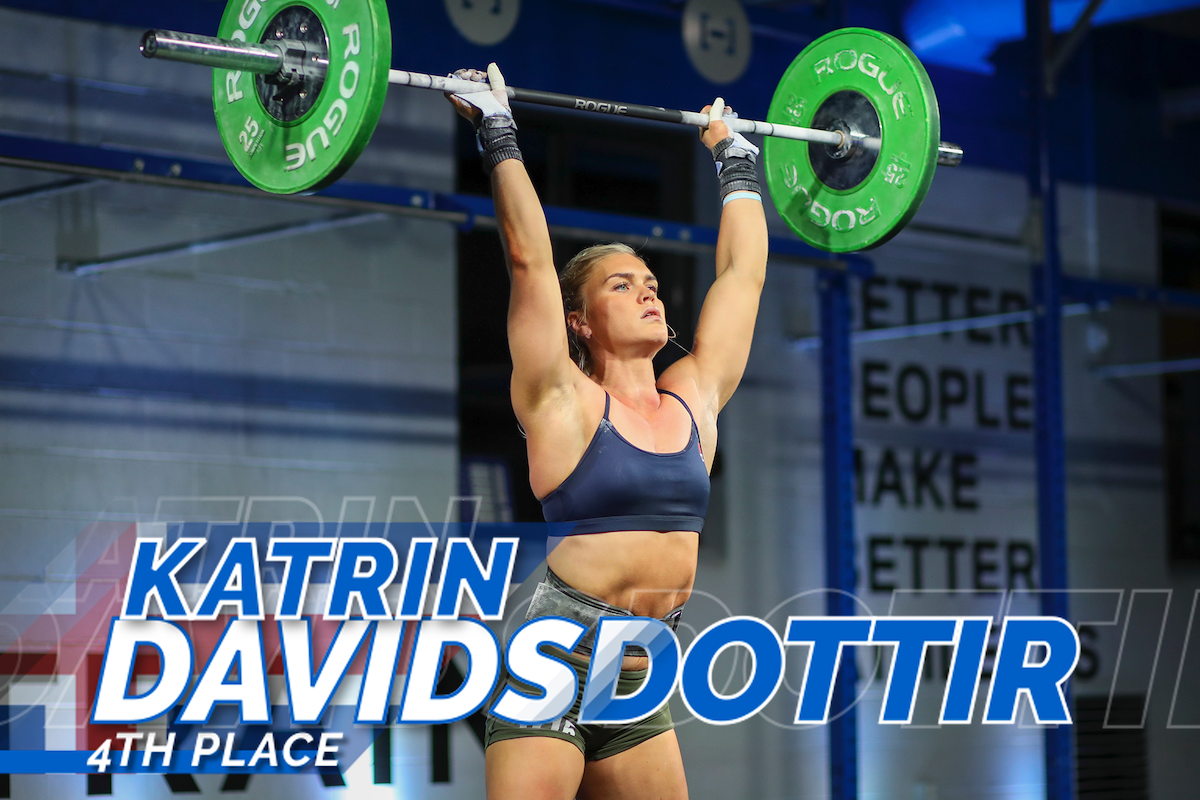 Halfway through Stage 1 of the Games, it looked like former Fittest Woman on Earth Katrin Davidsdottir was on her way out of the competition. After  three event finishes outside the top 10, one of which was a 27th-place finish in 1RM Front Squat, Davidsdottir appeared to be out of striking range for the trip to Aromas. But you don’t become a two-time champion by resigning yourself to being in the middle of the pack.

Davidsdottir gave her fans a nail-biting performance this weekend but rewarded those who kept the faith through the end of Day 2. If ever an athlete deserved a theme song, Davidsdottir’s anthem should be The Supreme’s “You Keep Me Hangin’ On,” not only for the sentiment but also the length, as the full song is about seven seconds shorter than Davidsdottir’s handstand hold in Event 6 on Saturday morning.

Davidsdottir earned back-to-back event wins in Nasty Nancy and Handstand Hold and a seventh-place finish in the final event, Awful Annie. The decorated Icelandic athlete’s performance catapulted her into fourth place overall, securing her qualification for the finals next month and her sixth consecutive top-five Games finish. 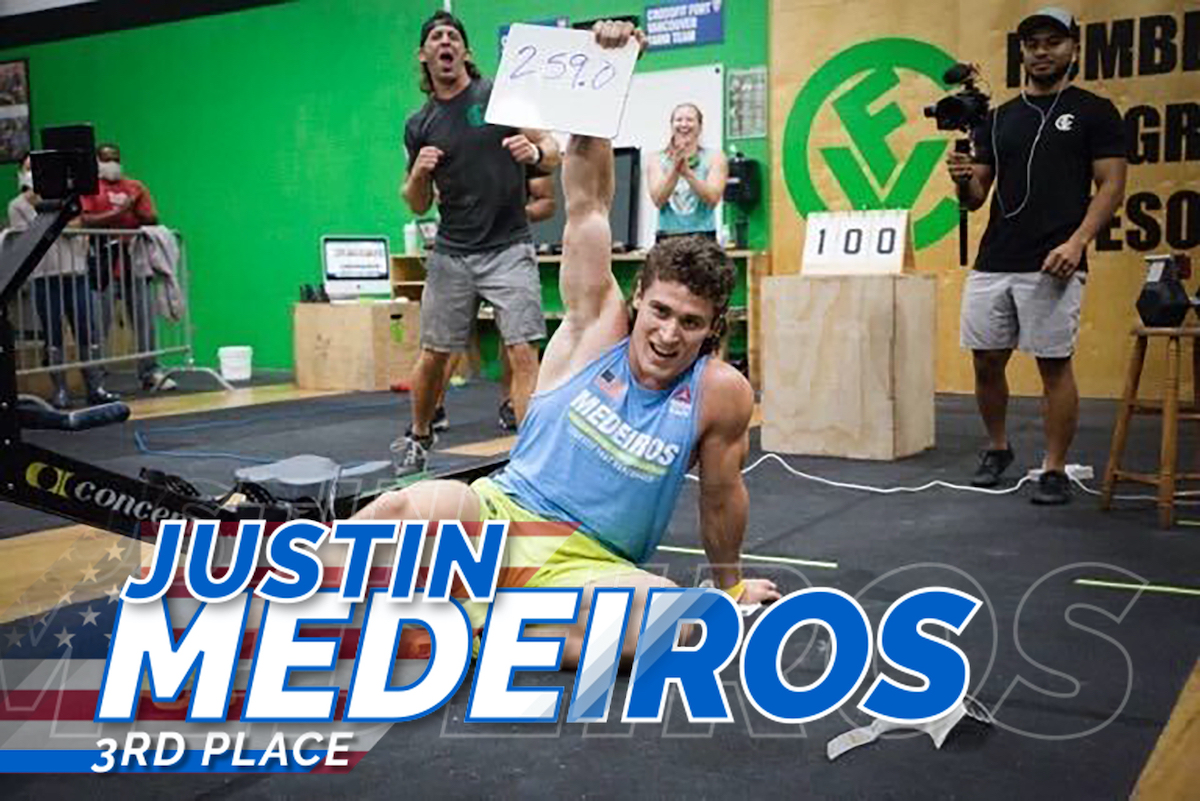 The 21-year-old rookie out of CrossFit Fort Vancouver made an impressive first outing at his first Games performance, delivering a slew of top-five finishes, along with serious Baywatch-era David Hasselhoff vibes. Maybe it was his glorious mane, maybe it was the hours and hours of hard work and dedication in the gym, but Justin Medeiros put on a hell of a show over the two days of Stage 1 competition.

The youngest competitor in the final five on the men’s side, Medeiros finished the weekend with five event finishes in the top 10. His best event was Nasty Nancy, where he ran, squatted, and burpeed his way to second place with a time of 18:19, bested only by Mat Fraser. He made up for it in 1RM Front Squat, where he stood up 12 pounds more than Fraser, taking third place with a 437-lb. lift.

It has been nearly 10 months since Medeiros earned his spot at the Games by winning the first Sanctionals competition of the season, Filthy 150. He managed to carry that momentum into last weekend’s competition. It will be exciting to see what he does with this newfound momentum heading into the finals next month. 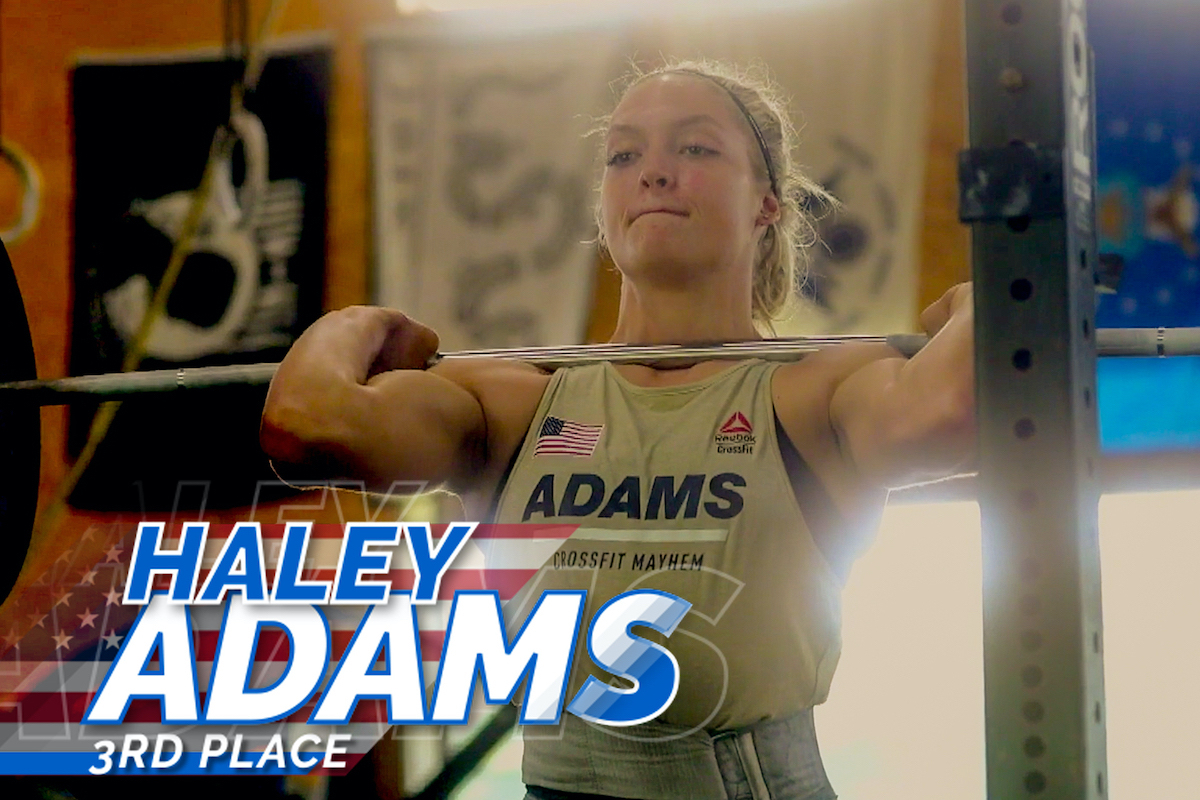 Haley Adams will once again be the youngest competitor on the field next month in Aromas. The former Fittest Teen on Earth entered the individual competition at just 18 last year, besting all but five of her seniors to take sixth. Now 19, Adams continues to put on stellar performances that can teach even seasoned Games competitors a thing or two.

An impressive five of her seven events in Stage 1 finished inside the top 10. Still struggling with feats of raw strength — some may recall she failed to lift the first barbell in the clean event in 2019 — Adams’ worst event of the weekend was 1RM Front Squat.

Road to the Ranch host Annie Sakamoto worried Adams would struggle with the heavy cleans in Awful Annie, but in an interview before the event, Adams said it wouldn’t be a problem. She was right. She took fourth in the event and secured third overall.

Adams thanks her family and friends at CrossFit Mayhem for supporting her along her road to the Games. You can get a behind-the-scenes look at her preparation here. 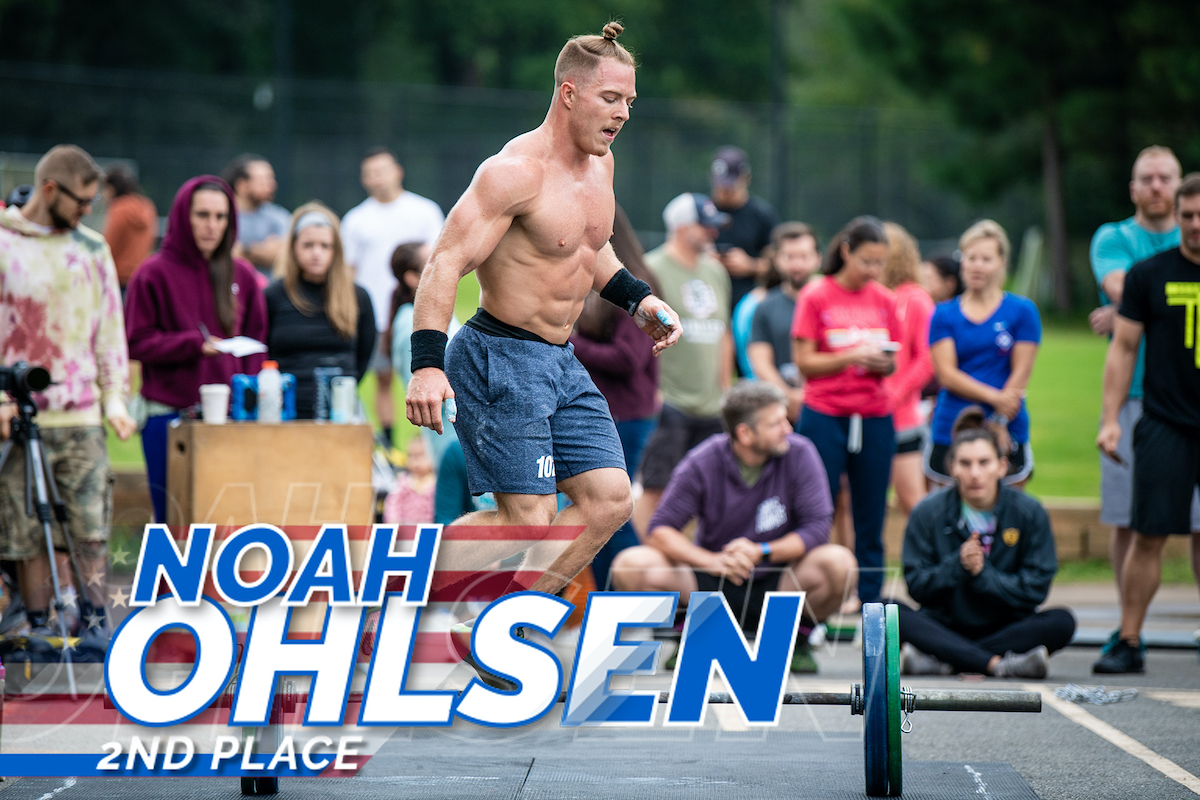 Noah Ohlsen is the only athlete to give Mat Fraser a run for his money since Fraser became a permanent fixture atop the Games podium. In 2019, Ohlsen wore the leader’s jersey for the majority of the competition. It all came down to the last two events, but Fraser’s back-to-back wins in Ringer 2 and The Standard edged out Ohlsen’s efforts. Ohlsen took second overall in 2019, finishing there again after this year’s Stage 1 events.

He completed this year’s events in the same location as pals Travis Mayer and Chandler Smith. The good vibes must have been strong, because Ohlsen ended up accumulating three top-two finishes over the course of the seven events, including a first-place finish in Handstand Hold, where he held on for 1:37. He also crushed Friendly Fran and Damn Diane, landing in second behind Fraser in both events.

Ohlsen had his best finish in the Open this year, taking sixth worldwide and second in the U.S. He has four Regional event wins under his belt, and this year marks his seventh trip to the CrossFit Games, where he will have a chance to grab the crown for the first time. 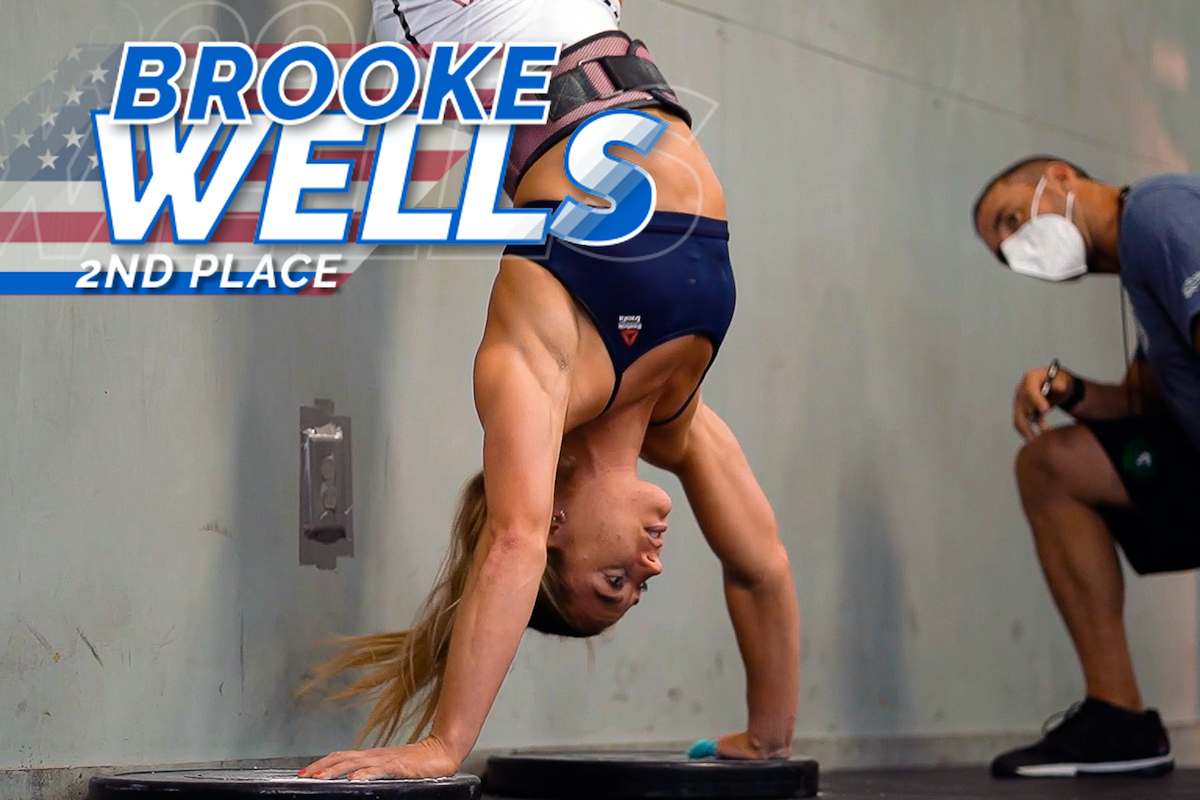 Brooke Wells put herself on the map by winning the 2015 Central Regional at 19 years old. That year, she went on to take 16th at the Games, and she’s competed at the Games every year since, earning her best finish — sixth — in 2016.

Last year she experienced some heartbreak when a slipup in Sprint caused her to get cut with six events remaining. She returned this year with a fire to compete, putting on an impressive performance in Stage 1.

Wells banked five top-five finishes across seven events and never finished outside the top 10. She bookended her weekend with two third-place finishes in Friendly Fran and Awful Annie. She can head into the finals knowing she just finished her most consistent performance to date. 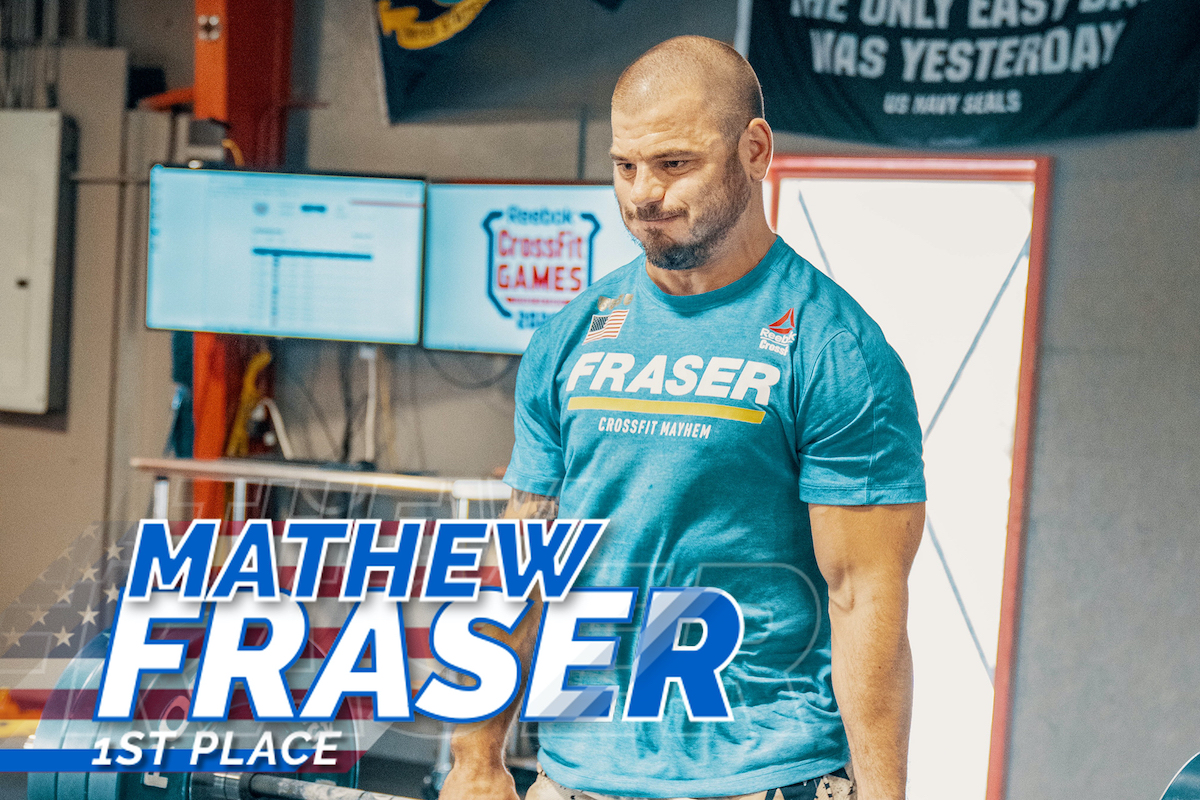 Mat Fraser is now the most decorated athlete in CrossFit Games history. Over the weekend, the four-time Fittest Man on Earth added a new record to his name: most all-time career Games event wins. He took first in four of the seven events and never finished below eighth. If you didn’t see what he did to Friendly Fran to start Stage 1, you should probably strap in and go along for this ride. 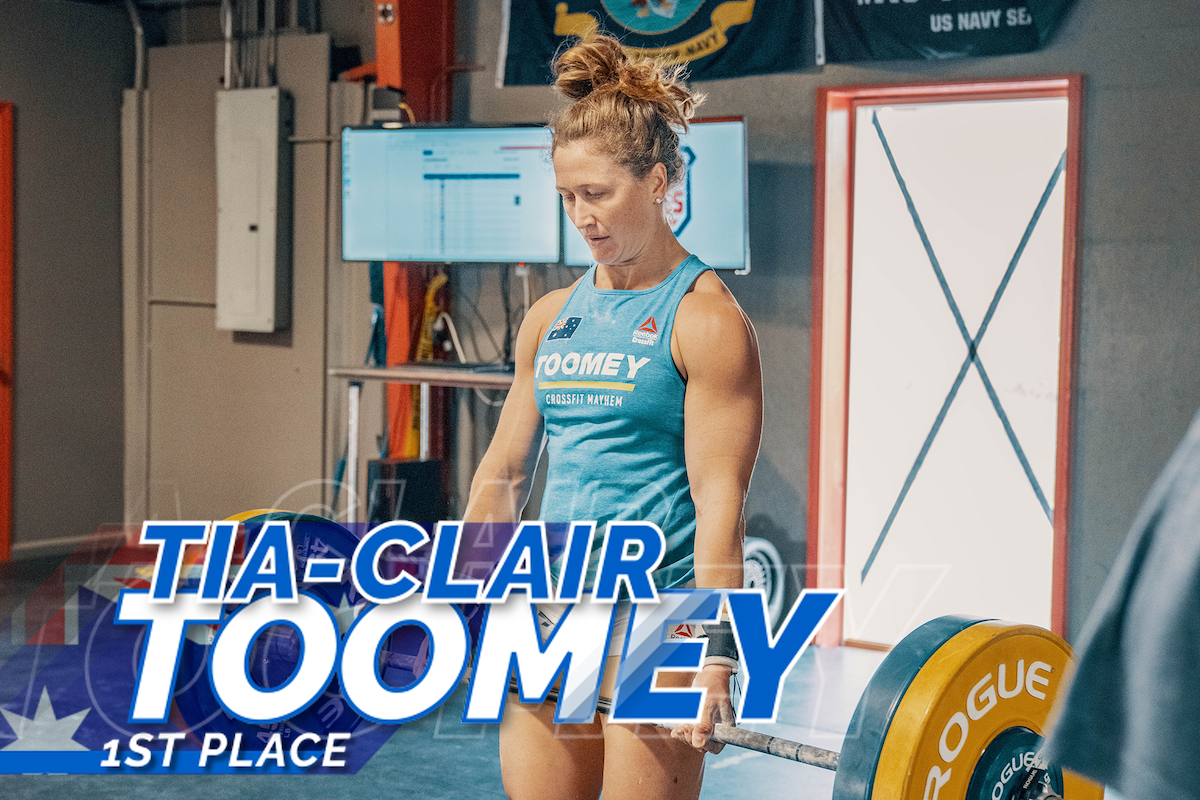 Tia-Clair Toomey is just one CrossFit Games win behind Fraser. The three-time Fittest Woman on Earth looks to increase her record in Aromas next month.

This weekend, she became the only athlete to ever win the first three Games events. Like Fraser, she accumulated four first-place finishes in Stage 1.

She has competed at the Games every year since 2015, never finishing below second.

Here she is holding her training buddy aloft, and here she is cooly lifting the weight of a baby elephant in 1RM Front Squat.

The final stage of the CrossFit Games starts next month. Watch the top five men and women go head-to-head live from Aromas, California, from Oct. 19-25.

Get your Games gear:

Gear up in the official 2020 CrossFit Games collection. Visit the @Reebok store through the link in bio. — #CrossFitGames #CrossFit #fittestonearth #Sports #Workout #Training

"The 5 Most Dominant Performances at the 2020 CrossFit Games, Stage One," BarBend