I asked an athlete about her clothing last weekend.

It happened to be two-times CrossFit Games champion Katrin Davidsdottir.

While she sat on the bike between events on Day 2, I asked her how she decides what to wear, and she explained.

When I posted about it in the CrossFit Photo Journal, several people were quick to point out that the question was inappropriate, citing a lengthy history of sports reporters who objectified and even demeaned women.

Wondering about @katrintanja’s outfits? - I asked the Icelander about going back in black to start the competition. It’s a color I’ve rarely seen her wear. She said the apparel was coordinated with @reebok, and the choice really grew on her. - “I ended up feeling really badass. Yesterday was a badass day, and I thought it fit.” - Davidsdottir said she always wears brand new clothing to compete, and she suggested she would probably go with pink and purple for the afternoon. - “It goes by mood,” she said. - She also noted that she likes sparkly apparel. That’s no surprise. Gold medals tend to catch the eye, too. - Katrin’s won three of four events and is first overall with two events left. - 📷 @crossfit204 #CrossFitGames #EastRegional #Regionals2018 @crossfitgames

But that goes both ways.

At the Games a few years back, I asked Sean Sweeney about that badass cowboy hat. As you can imagine, it means something to him.

In Copenhagen, Denmark, I once asked Jonne Koski about his shirt that said “Mikko who?” as a lighthearted jab at his friend and 2009 CrossFit Games champion Mikko Salo. Another male, Tom Wyles of the CrossFit 1664 team, was wearing short Union Jack shorts that barely covered the crown jewels, and I asked about that, too. A retired commando, he was paying tribute to his country and the Royal Marines.

In Del Mar, California, last year, Garret Fisher told me he didn’t pull up black knee sleeves during wall balls because he was concerned they wouldn’t give the judge enough contrast with the black shorts that covered his hip crease.

So is it wrong to ask athletes about what they’re wearing?

I also thought about asking Michelle Kwak a question about the color of her apparel at the East Regional. She often wears tones that remind one of the military, and perhaps her choices are a nod to proud service. Don’t you want to know if that’s the case? I’d certainly relish the chance to share more about how Kwak is obliterating gender barriers by lobbing grenades downrange in the National Guard. Follow @meechi_bomb to see what I mean.

We actually have an upcoming CrossFit Journal article that deals with a related topic: Should coaches of any gender comment on the appearances of clients of any gender? Feel free to post your thoughts to comments here and when the article comes out. I can tell you now that people do not agree on the answer.

We have another article coming in which a coach talks about being brushed aside by chauvinist men in CrossFit gyms. It’s written by a woman who can deadlift more than you can. Talk about that, too.

CrossFit has long championed equality and never put a limit on what women can do. We only recently started listing loads for females on CrossFit.com, but that’s to help them scale properly rather than put limits on performance. Fit women should ignore the suggested loads and beat the guys head-to-head in the same workouts. 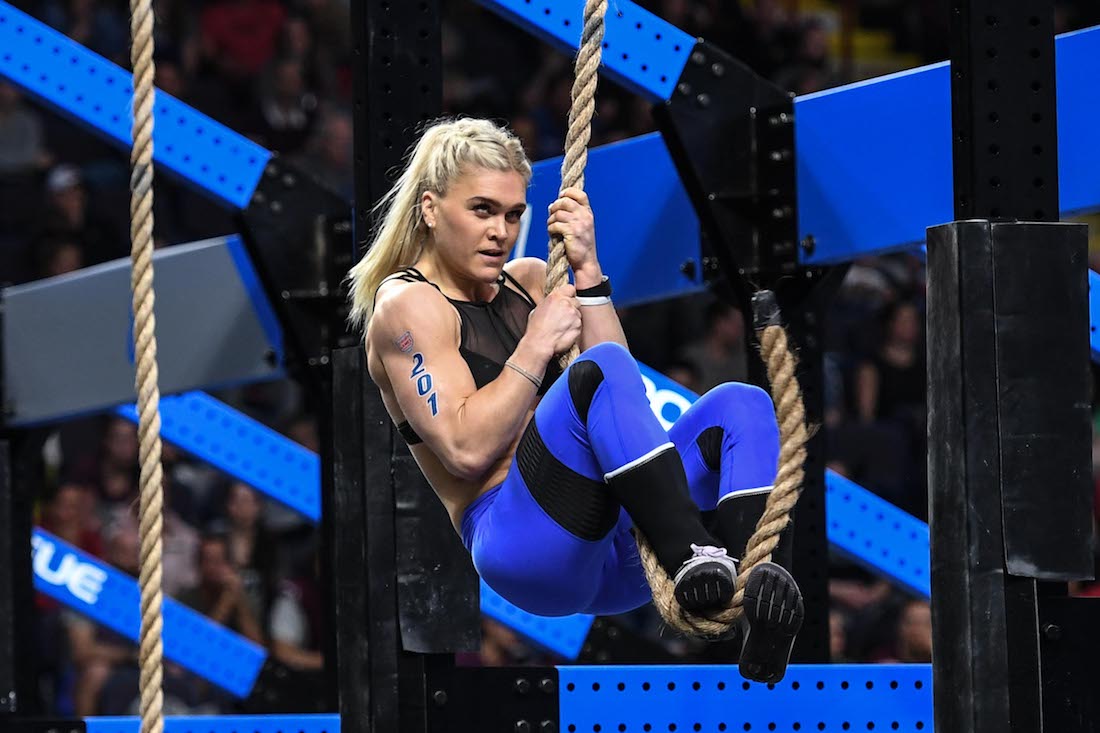 Perhaps the best example of CrossFit’s attitude toward equality is mass-start Games events in which women like Tia-Clair Toomey and Sam Briggs get to demolish most of the men’s field. Who doesn’t enjoy seeing that? Prize money is equal at the Games, too, and I’d suggest—based on comments and crowd noise—that people care far more about the women’s competition.

As CrossFit Founder Greg Glassman has noted, CrossFit even redefined beauty. That’s intangible, sure, but in a world where the standard of beauty has long been driven by heroin-wasted, impossibly skinny models, CrossFit has built generations of strong women who chase numbers on a whiteboard and clean what some men can’t deadlift.

At the 2016 Reebok CrossFit Games, I saw a word on Davidsdottir’s shoe. It said “Amma,” and I took a picture of it. Then I asked the champ about it. She told me it meant “grandma” and was there to commemorate a very special departed loved one.

I’ve also talked to Davidsdottir’s coach, Ben Bergeron, a few times over the years, and I know the coach and athlete plan everything. No details ignored. Literally nothing is left to chance when it comes to training and competition.

Davidsdottir faltered somewhat last year, and her performance at the East Regional wasn’t what I would have expected. She wore white that year in at least one event. This year she started the competition with black on black—a sharp departure from what I’d seen in the past. 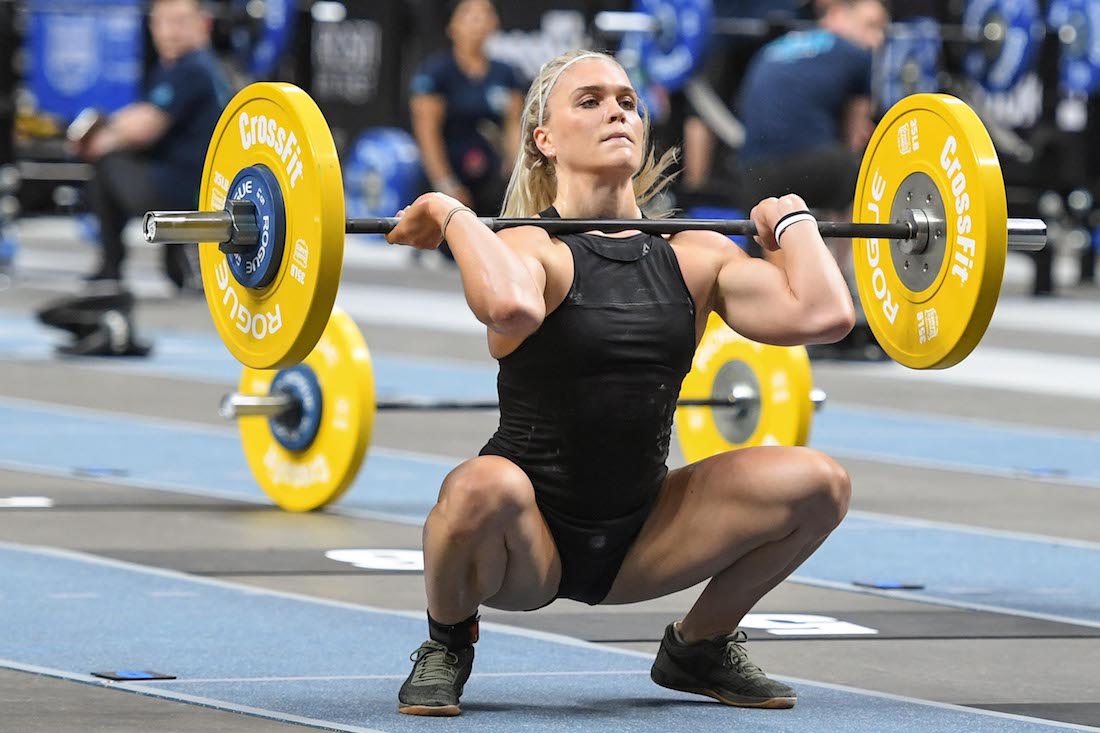 All of this was noteworthy to me, and when Davidsdottir posted an Instagram story in which she talked about possible outfits for the next day, I needed to ask her some questions about it. It was on her mind, and it’s my job to find out what the athletes are thinking about.

When I spoke to her on Day 2, she was wearing shorts emblazoned with the logo from the 2017 Games, in which she finished off the podium. I was curious if the shorts were special in any way, perhaps a reminder. They were not. They weren’t even from the Games in Madison; she was wearing a brand-new pair of the 2017 edition. She said she always competes in new clothing.

We talked some more, and as I was writing later she actually walked by, smiled and told me it was time to pick her outfit.

Then I posted and some people got mad. I thought hard about the whole thing, and I responded. Later, I even got a chance to ask Davidsdottir if the question was out of line. Here’s what she said on the CrossFit Podcast at the end of Day 3.

“It made me proud that you asked, because I was like, ‘I put so much effort into it.’ Like, I want to be asked about it. And there are some guys that you would ask, too. … It’s something that I do think about.”

Some will brush all this aside and simply say it’s inappropriate to ask an athlete about her appearance.

I agree. I didn’t comment on how Davidsdottir looked. I asked about her preparation, mindset and symbolism, and for her, clothing is a part of that.

Others will say we shouldn’t ask women certain questions and risk presenting athletes as 1970s Barbie dolls. But I’ll counter by saying I’m presenting a more complete picture of one of the Fittest on Earth, one of the most meticulous athletes I’ve ever seen, and someone over 1 million people follow on Instagram: “This is how she prepares and this is how she performed.”

Disagree and debate below. Take the discussion further.

Sometimes you have to.

Follow @CrossFitPhotoJournal for updates from the West and Atlantic Regionals.

About the Author: Mike Warkentin is the managing editor of the CrossFit Journal and the founder of CrossFit 204.