Just a Ride in the Park

The Assault AirBike, Rogue Echo Bike, and other stationary bikes are frequently added to CrossFit workouts as a monostructural element, and CrossFit Games athletes train on these machines almost daily. So adding two wheels and some terrain shouldn’t be so hard, right? Wrong.

The Trek bike required athletes to ride by feel. There was no screen showing cadence, watts, and RPM. For those new to off-road biking, it was as if they were riding blind, leaning on their fitness to guide them through the event.

And that’s exactly what seven-time Games athlete Haley Adams did during the opening event of the 2022 NOBULL CrossFit Games. It seemed as though the 21-year-old had grown up on two wheels, despite an absence of cycling experience. There was zero tension in Adams’ upper body; her arms looked completely relaxed. If she felt any pain, she didn’t show it and made the final 5-mile trek look like she was truly biking to work on a warm Madison morning.

Entering the North Park Stadium well under the 50-minute time cap, Adams threw her bike down and set off on a footrace to the finish against Tia-Clair Toomey and Emma Lawson, completing the event three seconds ahead of Toomey in 38:23.74 for her first career CrossFit Games event win — and a start to her seventh Games at the top of the leaderboard. 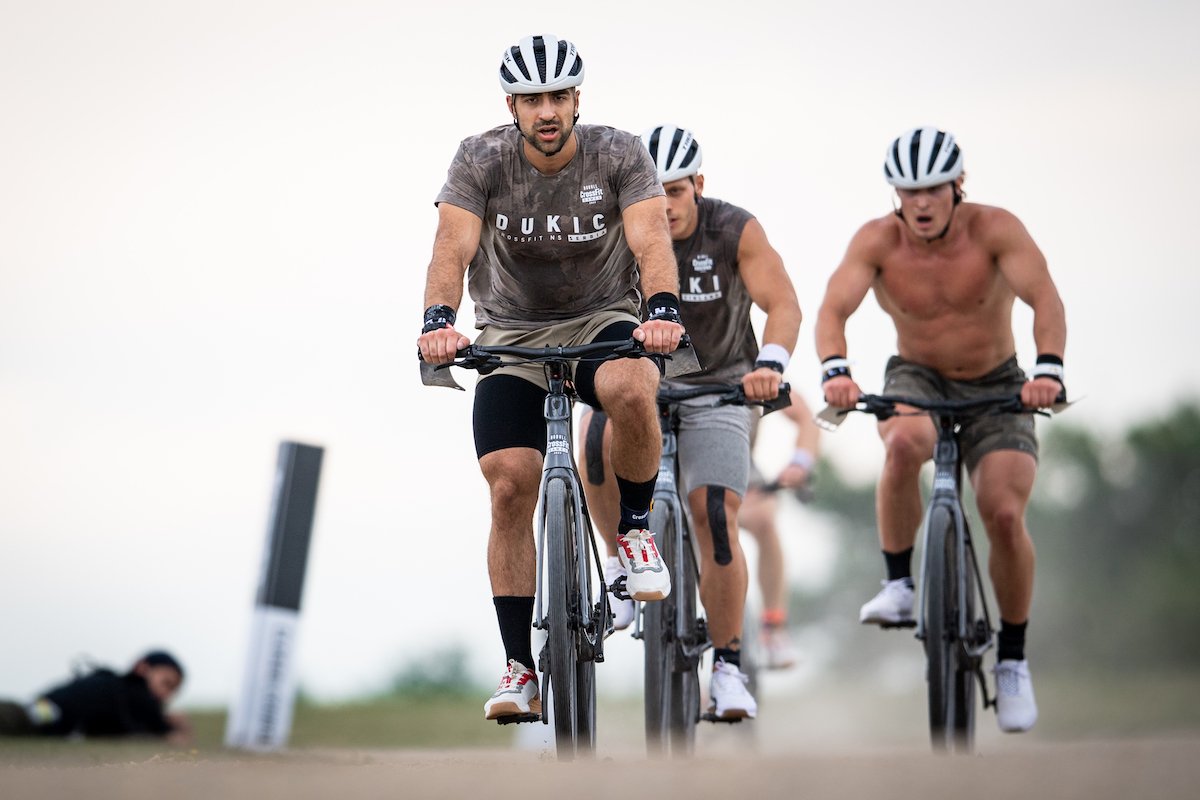 Lazar Đukić, Jonne Koski, and Justin Medeiros quickly discovered the impact of drafting during the first 5-mile stretch in Bike to Work. The trio of Games veterans formed a pack, creating a follow-the-leader drafting train, switching the line leader periodically each mile. This meant each athlete only had to work hard 30% of the time, and the three were the first to enter the North Park Stadium to begin their 75 chest-to-bar pull-ups, proving that rising tides lift all boats — even in competition.

Adapting to the Elements 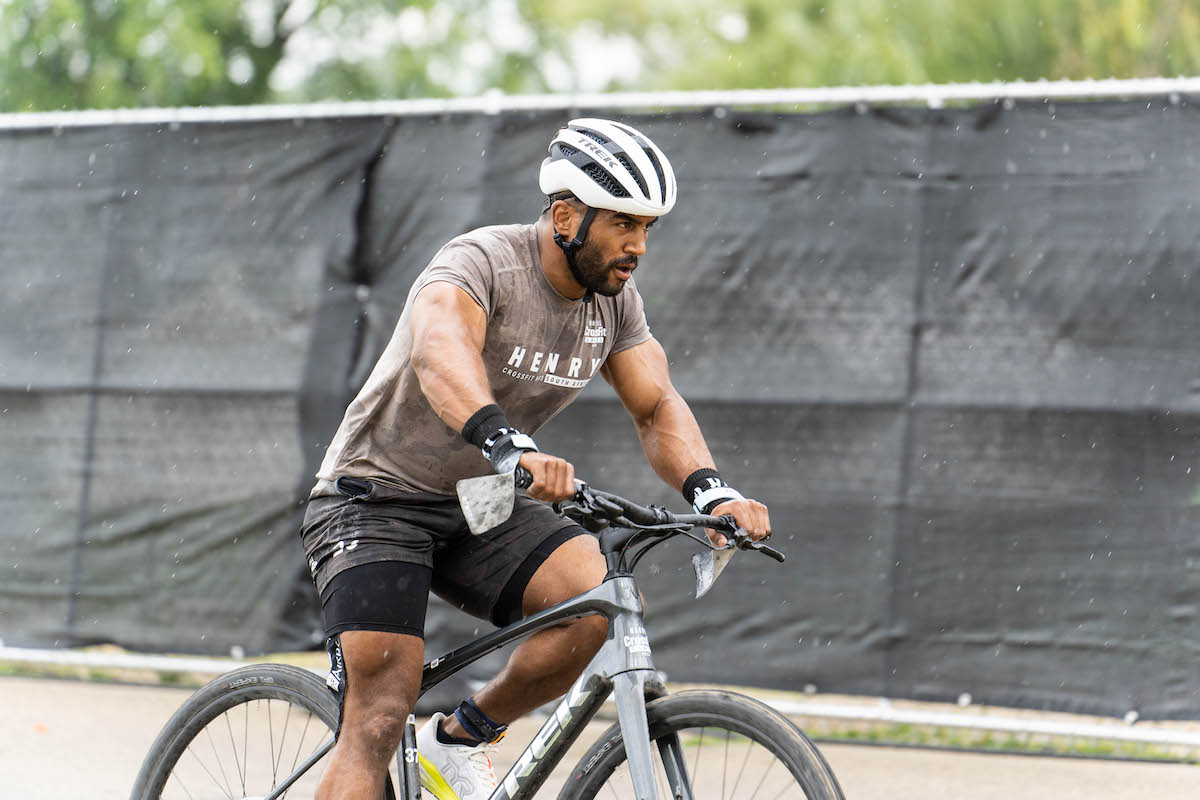 Kealan Henry during Bike to Work | Photo by Amy Wong

The individual men were accompanied by a light drizzle and 7-mph gusts of wind — the start of an ever-growing storm — as they set out on their second 5-mile bike ride to end the first event of the competition.

Without rain, the athletes were met with all types of terrain, from pavement to grass to unstable gravel, and the addition of precipitation only amplified the difficulty of the course. As the pavement and grass began to slick and the dusty gravel turned to mud, athletes had to adapt to the new challenges.

You can’t win the CrossFit Games on the first day, but you can lose it. If an athlete is too reckless in the elements, they could risk injuring themselves. Understanding how to safely adapt to the elements was key in the first event of the Games.

The CrossFit definition of fitness is work capacity across broad time and modal domains, and to build it, you’ve got to be prepared for the unknown and the unknowable. That means maximizing your ability to complete the broadest range of physical tasks in the most efficient way possible.

Following in already hewn tracks to find the grippiest route and drafting behind another athlete’s bike to reduce wind resistance were some of the most efficient ways to complete the event, and athletes who could adapt to these strategies fast were the most successful. 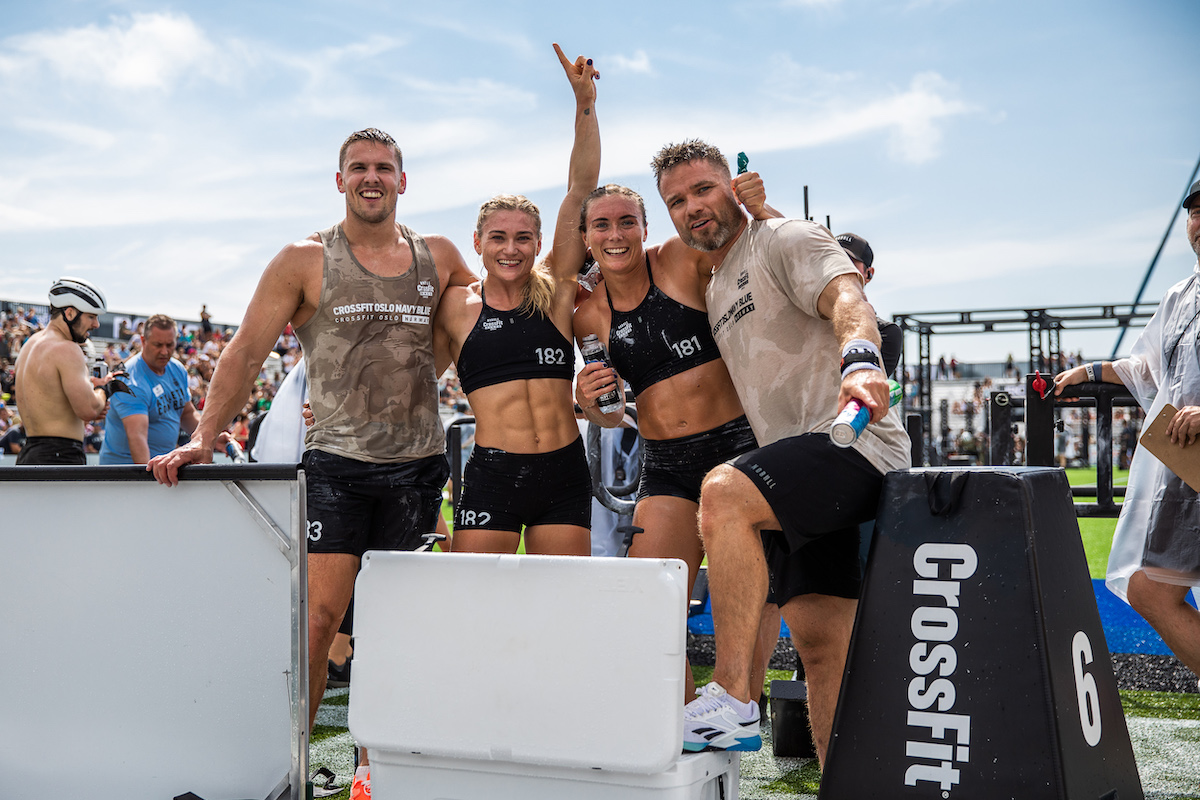 It was a long two hours of anxious waiting.

Heat 1 of the team competition completed the first event of the week just moments before the storm became too violent to continue, leaving Heat 2 teams hunkered down inside, awaiting their fates on the field.

At 3 p.m. in Madison, the teams were given the green light to proceed and gathered around their name placards on the gleaming wet turf. At the sound of the buzzer, it was evident how important proficiency on the Bob was to succeed in the event.

The 667-lb contraption is rarely seen within a team’s regular training setting. But that didn’t stop CrossFIt Oslo Navy Blue from preparing for the possibility of its appearance in the Games. Earlier in the 2022 season, the team put together a makeshift “Bob” using a yoke and a set of gymnastics rings to replicate the stimulus of a Bob.

As soon as CrossFit Oslo Navy Blue secured its hold on the Bob, the team sprinted down the North Park field while CrossFit Mayhem Freedom and CrossFit Mayhem Independence gave chase. But the Norwegians kept the Tennesseans in their rear-view mirror, beating them both to the finish by more than 10 seconds. The event marked the first time in 1,800 days that Mayhem Freedom finished a CrossFit Games opener looking up on the leaderboard.

A Kid at Heart

The aim of the CrossFit Games is to test athletes, not showcase them.

Skill Speed Medley introduced a brand-new movement to the competition: the double-under crossover. This was a movement that athletes neither expected nor prepared for.

Not a single woman in the final five was able to complete the 24 double-under crossovers, and the final five men struggled to string them together — only three completed the full set.

But CrossFit Games rookie Nick Mathew channeled his inner child, imagining himself playing with his daughter on the playground.

Tucking his legs high in his jump and coordinating the crossover to swiftly turn the rope twice under his feet, Mathew was the first athlete to complete larger sets of the double-under crossovers, bringing the roaring crowd to its feet. The electric spirit of the Coliseum helped push him to a full-out sprint through the single-leg squats and parallette handstand walk before he crossed the finish line well ahead of the remainder of the field.

“I’ve always been a kid at heart. I like to play at the playground and take my little one there every day,” Mathew said. “I guess I developed the skills for that fun stuff.”

A Race Against Time

The high-skill gymnastics workout with an aggressive 10-minute time cap pushed teams to their limits. But it was no match for the Syndicate Crown’s third-place finishing team, 8th Day CrossFit Black.

Appearing in the second heat, the team was the second to cross the finish line under the time cap — alongside Heat 1’s Move Fast Lift Heavy — setting the time to beat for the final heat.

The Michigan team had no struggle getting up the pegboard and across the parallel bars. With 50 seconds to go to beat Move Fast Lift Heavy’s time of 9:36.97, the team completed its final 15 Worm burpees in perfect synchrony and raced to the finish line in 9:28.04.

CrossFit Mayhem Freedom stepped onto the floor in Heat 3 ready to reclaim the leaders’ jerseys, but 8th Day CrossFit Black held tight to the lead, completing the event just one second faster. 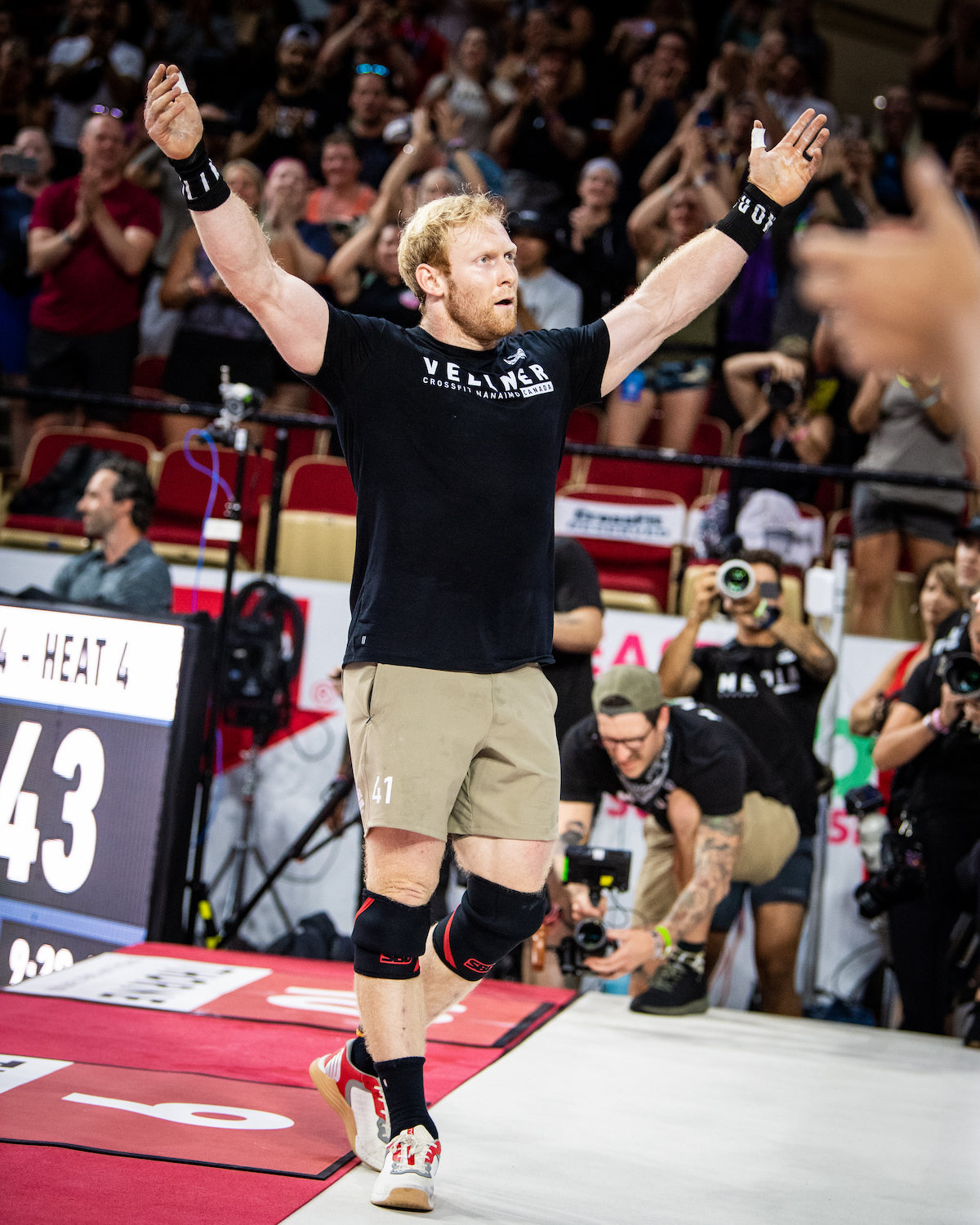 Seven-time CrossFit Games athlete Patrick Vellner has been knocking on the door to first place for years. With an extensive gymnastics background, the Canadian had Elizabeth Elevated’s parallettes in his wheelhouse.

Vellner’s impeccable speed on the bars was unseen in any athlete before him. As the finish line crept closer, Vellner’s lead grew wider, and the crowd grew louder.

With 1 rep left of his parallette dips, Vellner paused for a brief second to give the audience a quick nod, as if to say, “Yes, I did that,” before finishing the work with a traditional gymnastics dismount, sending all athletes at the 2022 NOBULL CrossFit Games the message that he’s a force to fear.