After a grueling first day of competition, athletes got a later start on Saturday as the competition got underway at 10 a.m. PT.

On deck for Day 2: Toes-to-Bar/Lunge, Snatch Speed Triple, and Bike Repeater, which would all take place at the Morgan Hill Sports Complex. The afternoon would bring an unknown event back at the Ranch in Aromas.

Heading into the second day of competition, reigning and defending champs Mat Fraser and Tia-Clair Toomey topped the overall leaderboard. Fraser ended Day 1 with a massive 220-point lead ahead of rookie Justin Medeiros in second, while Toomey held a 75-point lead over second-placed Haley Adams. See the full leaderboard here.

The first event of the day challenged athletes to a 30-20-10 rep scheme of toes-to-bars and kettlebell lunges (yards) with kettlebells held in the rack position. Check out Head Judge and CrossFit Training Senior Content Developer Adrian Bozman’s analysis of the event here.

It was a brisk morning, leaving the grassy field covered in dew at the Morgan Hill Sports Complex as the women approached the competition floor to kick things off. This was going to be a quick one.

The wet grass proved to be a challenge for Kari Pearce and Haley Adams, who both slipped during their first lunge down the field.

Icelandic Katrin Davidsdottir led the field until the final 10-yard lunge when Toomey passed her to take the event win with a time of 3:33.63.

“It really came down to transitions and being efficient with that, ” Toomey said after the event.

“I feel great this morning after a nice long sleep, and I’m ready for Day 2,” she adds.

The men took the field for Toes-to-Bar/Lunge next. Ohlsen cycled his toes-to-bars more quickly than any other athlete and was the first to tackle the 30-yard lunge. He continued to lead until the set of 10 toes-to-bars when — you guessed it — Fraser caught up and then passed Ohlsen to win the event with a time of 3:04.77.

“(Ohlsen) was like a rabbit out in front of me,” Fraser said after the event.

Always a fan favorite, weightlifting speed ladders have been a part of the CrossFit Games for years. The last time we saw a snatch ladder at the Games was in 2015. That year, the first women’s barbell weighed 110 lb., and the weights increased incrementally to reach 180 lb.

The quarterfinal, semifinal, and final format saw one woman eliminated each round. Haley Adams was first to be eliminated after being the last to clear the 155-lb. barbell. In the semifinal round, it was Pearce who was cut as she took the longest to successfully lift the 170-lb. bar.

Wells, Davidsdottir, and Toomey competed in the final round with Toomey showing why she’s an Olympian, clearing the ladder first. Wells finished in second. Davidsdottir, who had already locked up third place in the event, failed her first attempt at 185 lb., but after a quick break and deep breath, she proved why she’s a two-time champ, successfully lifting the bar to close out the event on a good note.

“With a technical lift like the snatch, you want to make sure you’ve got everything dialed in,” Toomey said after the event.

“Any speed ladder is always a lot of fun,” she adds. 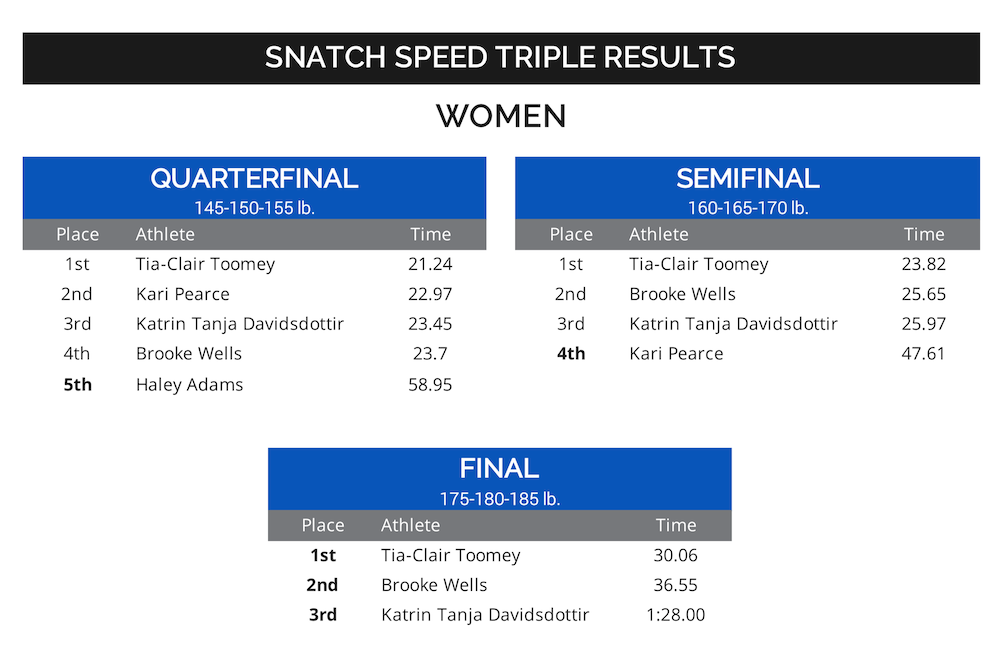 In the quarterfinal round, Medeiros was the first to be eliminated after he and Ohlsen both failed at 245 lb. Ohlsen’s next attempt was successful and he advanced to the semifinal round.

Ohlsen, Kwant, and Adler all failed at the 265-lb. bar in the semifinal round, as Fraser snatched it with ease, stepping over the line and advancing to the final round. Kwant and Adler out-lifted Ohlsen, who was next to be eliminated.

A former Olympic weightlifter, Fraser won the event in the final round to tally his sixth win of the weekend so far. Adler and Kwant rounded out the top three in second and third, respectively.

“This one came down to timing, technique, and how well you know yourself,” Fraser said after the event. 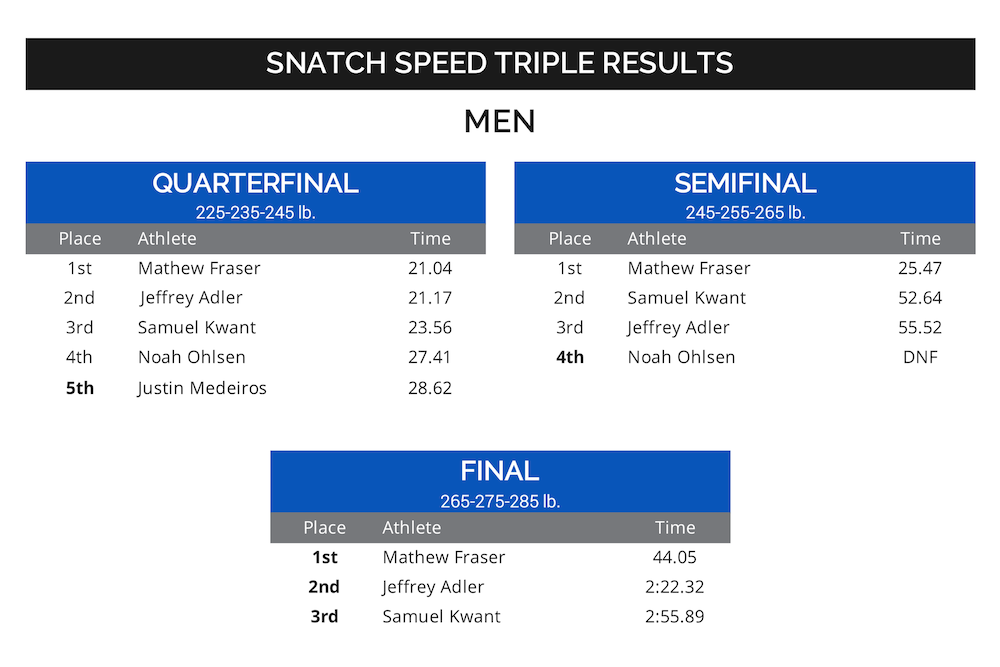 Athletes took to the hybrid bikes for Event 8: Bike Repeater. The event challenged athletes with 10 rounds of a 440-meter bike sprint down the field and 1 legless rope climb. The hybrid bike, also referred to as a pseudo road bike, features thinner tires than a mountain bike.

The women were up first and overall leader Toomey was out front early. Toomey’s smoothe turns around the pylon and strong pulls on the rope helped her open up a significant lead on the rest of the field. The real race was for second place.

Pearce seemed to have the edge on the rope but fumbled a bit on the bike. Davidsdottir’s kip on the rope made her a bit slower, but her bike efforts were dialed in. Adams seemed to have the best of both, and her skills led her to a second-place finish (14:53.61) in the event just behind Toomey who took the win (14:37.51).

“I didn’t really get on a bike too much before the Games,” Adams said.

“I like to think I can adapt really well,” she adds.

The men took the field next and early on it was a race between rookie Medeiros and Fraser who kept pace with each other for much of the event. But by about Round 9, Adler had crept up to second place, and was right on the heels of Fraser. Fraser finished just 2 seconds before Adler who took second in the event (12:56.35). Medeiros locked up third (13:20.52), Kwant took fourth (13:39.95), and Ohlsen came in fifth (14:20.82).

Adler, who doesn’t train with bikes often, said the win was a nice surprise: “That was unexpected,” he said after the event. “I thought I would not finish in the top three.”

The final event of the day was announced this afternoon as athletes made their way back to the Ranch in Aromas.

Happy Star challenged the field to a brutal combo of hill running, burpees, and thrusters. Athletes would start by running a hill loop followed by 5 burpees and 5 thrusters. In the second round, athletes would run a different loop, then complete 7 reps of each, only this time with a heavier thruster. Each round, the run course would change and the reps and weight would increase.

Toomey entered the event with a comfortable 245-point lead over the rest of the field, but the second- through fifth-place spots were shifting with each event.

In a style we haven’t seen before, the burpees were completed by athletes jumping over a beam that was set a few feet off the ground.

Wells came out hot, leading the women for the first couple of rounds. But by Round 3, Toomey started to close the gap. Wells lost steam on her last set of thrusters allowing both Pearce and Davidsdottir to sneak into the second- and third-place spots.

“Don’t let the girls get too far ahead on the run, move as fast as you can on the burpees, and keep it clean on the thrusters,” Pearce said of her strategy in the event.

Fraser entered the event with a 390-point lead over the men’s field. Just as on the women’s side, second through fifth was a close race and an event win for any of the other four athletes would shift the standings.

In true champion fashion, Toomey and Fraser swept all four events today, giving themselves a more-than-comfortable cushion heading into the final day of competition.

Tomorrow we crown the Fittest on Earth.