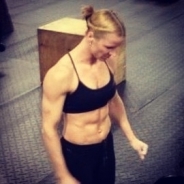 I have three beautiful children Darren 14, Maxwell 11, and Lucy 6. I teach 7/8th grade Language Arts. I truly love people, having fun, and working out! Athletically I ran college cross country and track. Then, I dabbled in bodybuilding as a WNBF/INBF competitor. I took 7th Place at the Mr/Mrs. Universe World Natural Bodybuilding Championship. I ran a slew of 5ks, half marathons, and qualified for New York City Marathon. Shortly after I had a knee injury and found Crossfit. I've been at Crossfit Milford ever since with Coach Jason Leydon. I have been fortunate enough to be a 5x regional team competitor with Crossfit Milford. I also Qualified with Crossfit Milford's Team, at Regionals, taking 2nd place overall in the East this year- 2015! My past open finishes were 20th in 2012, 8th in 2013, 31st in 2014 , 31st in 2015 - in the North East Individually. I was recently signed to The Baltimore Anthem as a Masters Athlete. I am just loving life right now! :) I'll update later....I have been injured and signed up this year for "fun...."