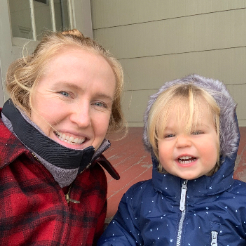 I live in Astoria, Queens, NY. I have a 3 year old named Gunnar and a 4 month old named Lila. I was a collegiate heptathlete and pole vaulter at UCLA. I was also a swimmer and water polo player in high school. I dabbled in rugby post-collegiately. I walked into the 2009 Regionals after training for 4 months in the weight room at my work and placed 9th. In 2010, 2 weeks after I won the SoCal Sectional, I became ill with a bacterial heart infection, called endocarditis. I underwent open heart surgery to repair my mitral valve. I credit CrossFit for building my health and strength, which helped me to weather the storm of endocarditis symptoms, to withstand the trauma of open heart surgery, and to recover quickly. I recovered fully in time to qualify for Regionals in 2011. I also qualified in 2012, 2013, 2014, 2015. I went to the Games with a team in 2014 and 2015.