Could this new team of CrossFit superstars finally knock Mayhem off the podium? It was the most anticipated storyline leading up to Madison.

But the pressure began to build on four individuals who barely knew each other: Annie Thorisdottir, Khan Porter, Tola Morakinyo, and Lauren Fisher.

Gathering in Iceland to prepare for the season, the team learned how to move, communicate, and train as a team.

CrossFit Reykjavík took an impressive fourth place in its debut as a team in the 2022 CrossFit Games Open. The team went on to take another fourth-place finish in Europe in the Team Quarterfinal and first place at the Lowlands Throwdown Semifinal.

The possibility of not only podiuming but taking the gold at the 2022 NOBULL CrossFit Games was within reach.

But two weeks before team members’ arrival at the Alliant Energy Center, an unexpected injury would add an even greater challenge to the pressure they were already facing. 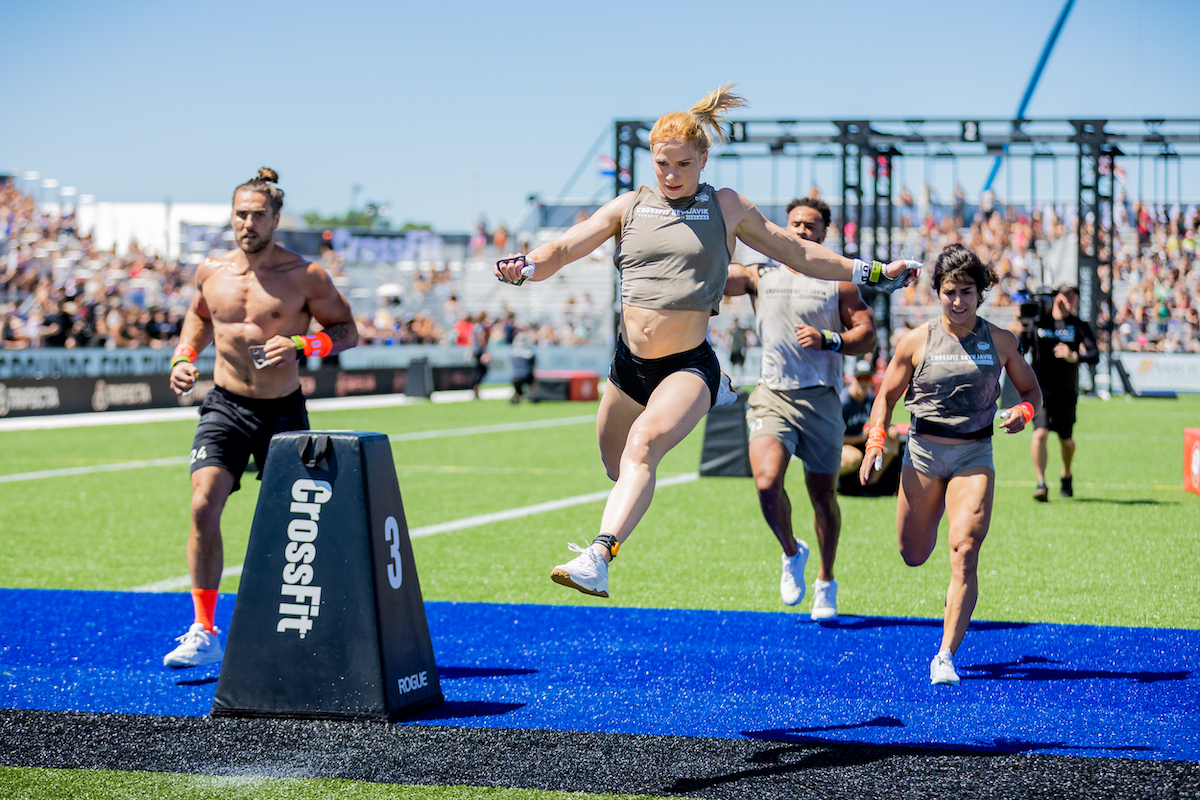 In the weeks leading up to the Games, the team continued to ramp up its training after arriving in the United States. But in one training session, Fisher tweaked her tricep during a chest-to-bar pull-up.

And on July 28, just four days before athlete check-in, Fisher couldn't even perform one pull-up.

"As athletes, we're all going through little injuries or nagging pains — (but) I wasn't even able to do a chest-to-bar pull-up," Fisher said.

This set the teammates back to the drawing board just days before they would step onto the competition floor. Would they keep injured Fisher on the team, risking a re-injury, or swap her out with team alternate Katrin Davidsdottir, who was healthy and fit to compete?

The decision wasn't finalized until 20 minutes after check-in had ended. The team decided to keep Fisher on the roster.

"We're not robots. There are emotions involved, and we want to do this together," Thorisdottir said.

A Rocky Start and the Captivating Comeback

The first team event at the 2022 NOBULL CrossFit Games tested teams’ ability to work together with mountain biking, a 252-ft Bob push, and synchronized toes-to-bars. Team Reykjavík made a few mistakes, finishing in seventh place. However, this was its first event together; points were redeemable.

But after the storm clouds rolled in, Event 4 became Event 2, Pegs & P-Bars, a shoulder-burner and freshly injured Fisher's worst nightmare.

"Wednesday, Event 2. That was probably the worst experience I've ever had at the CrossFit Games," Fisher said.

Two of the three movements — the pegboard and the P-bar dips — would require immense shoulder strength, which would pose a threat to the team with Fisher's injury. The team decided the best strategy would be to have Fisher start with the dips to get them over with.

But there was a catch in this event. Every time you broke a set of dips, you had to walk back and re-traverse the parallel bars before continuing.

During the first round of dips, Fisher jumped up and started to walk her hands across the parallel bars as her teammates held their breath down the lane. Could she do it? After repping out eight of the first 15 dips, Fisher began to struggle and was forced to drop down and return to the start.

Soon, she was fighting through singles.

"It (was) really hard for me because I (felt) the fittest and best I've ever been, and I couldn't even do 15 dips," Fisher said. "It was a disaster."

The team finished in 30th place and sat in 18th place at the end of Day 1.

The possibility of winning the CrossFit Games was likely snatched away after just one day. But, with 900 more points up for grabs and three days of competitions remaining, the team was not ready to give up yet.

So CrossFit Reykjavík stayed in the top five in every event after.

Event 3 —  Strong — was a "choose-your-weapon" type of event. The male and female pairs chose whether to split jerk or front squat, hoping to accumulate the heaviest weight collectively as a team. To give Fisher's shoulder a break, she chose to front squat, with Thorisdottir taking the split jerk.

At the last minute, the boys switched their lifts, with Morakinyo deciding to split jerk and Porter attempting the front squat. That decision made a huge difference to their overall total.

The team finished the event in 4th place with a score of 1295 lb total lifted. 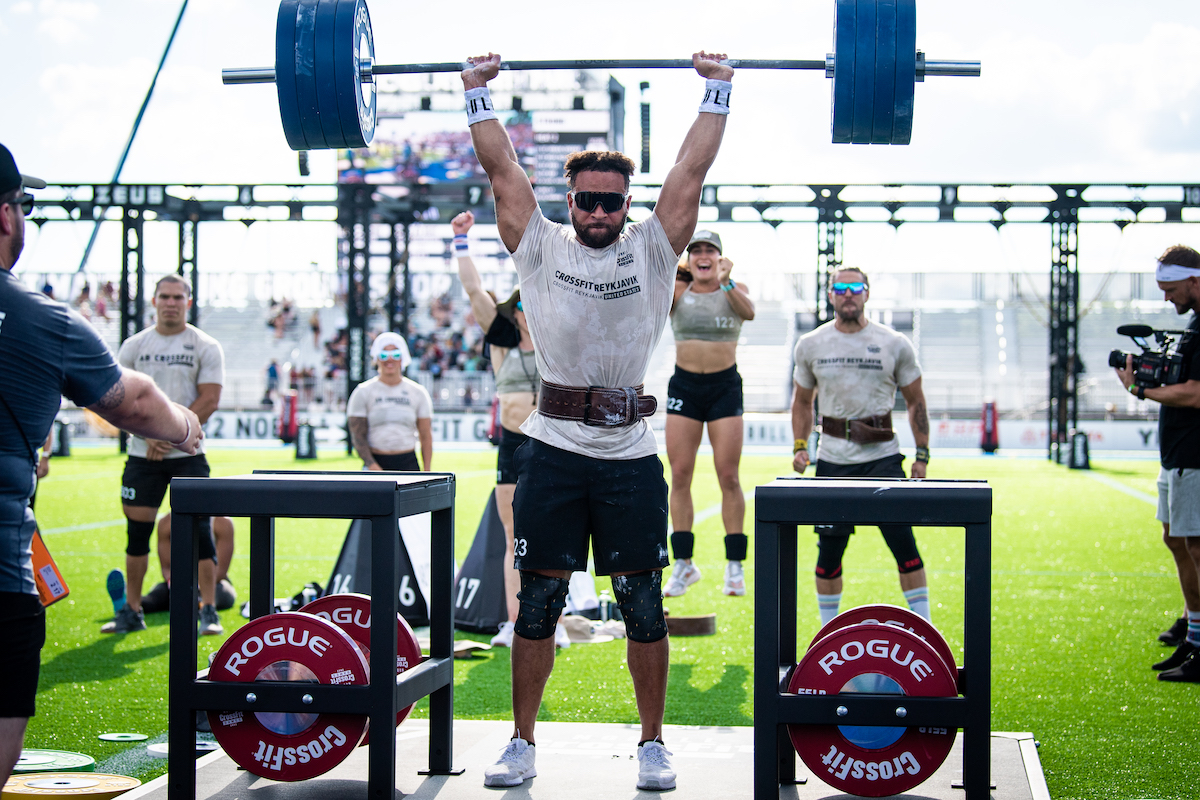 The teammates’ strategy for the remainder of the Games was to take each day just one test at a time, narrow their focus to the task at hand, and do their best to climb the leaderboard.

Fisher dug deep into the run during Event 4, giving any movement that didn't involve her shoulders everything she had in the tank. Porter and Fisher pushed the pace on the run to allow Thorisdottir and Morakinyo more time to cross the finish line. The team came in third, moving back into the top 5 and just 60 points behind Mayhem Freedom in third.

"It's about not stopping the fight and not giving up," Thorisdottir said after Event 3. "I think we showed today that's not what we're doing. I don't care what the leaderboard says. Who doesn't love a comeback story, right?"

Heading into the final day, Reykjavík was on the cutline for a podium spot. But this late in the game, the team couldn't rely on performance alone to secure a podium finish. Reykjavík needed some of the top-ranking teams to slip up and forfeit points.

"That's a difficult situation to be in," Thorisdottir said, "which is why we just thought about that one event at a time and making sure we would actually get the very most out of every single event."

Not a victory — but not a complete loss, either.

From out of the challenges the team faced all season was born a deep connection: four strangers moving to Iceland to train together. The pressure of challenging Mayhem. Working through Fisher's injury. Through it all, the athletes learned to grow and lean on each other through immense pressure and adversity.

"This year was definitely not a mistake," Thorisdottir said. "I learned so much this year, and no matter how the Games would go, I never would have wanted to miss out on the opportunity to get to know these people."

Watch all episodes of Miles to Madison Season 2 on the CrossFit Games YouTube channel.