CrossFit Games athletes choose to quantify many aspects of their lives to excel in the sport. From the amount of protein they consume to their average strain-to-recovery ratio, making it to the top is all about numbers.

But for 2021 NOBULL CrossFit Games teen athletes Delaney Wade and Michel Jean, quantifying their life is essential to their health.

Both athletes were diagnosed with Type 1 diabetes as teenagers, forcing them to mature quickly and begin measuring blood-sugar levels and closely monitoring their diet — not just for success in the gym, but for their very well-being.

Although physical activity increases the effectiveness of insulin, muscles use glucose, which lowers blood-sugar levels, throwing another wrench into the already formidable environment of competition. But that hasn’t kept these two elite athletes from succeeding in one of the most strenuous tests of fitness in the world.

A Diagnosis for Good

In 2018, Wade stepped through the doors of CrossFit One Valley. She was intrigued by how unique the classes were and began to work out at the gym almost every day while playing competitive soccer.

However, one year later, Wade noticed she was losing weight rapidly, always thirsty, and using the bathroom with greater frequency. On Feb. 1, 2019, she was diagnosed with Type 1 diabetes.

As Wade processed her diagnosis, quitting CrossFit and soccer never crossed her mind. In fact, she said she was motivated to push even harder after she was diagnosed, realizing how important it was to continue eating well and exercising to manage her condition.

"Being a Type 1 ... doesn’t restrict my life in any way. It has actually opened up many doors and made me a better person because of it,” Wade said. “When I got diagnosed, I knew that God was going to use it in a way, not for bad, but for good. … Maybe God gave me this so I can inspire a little girl or a little boy.”

Wade brings this perspective to bear on her competition training. She keeps a “no excuses” mindset and takes each CrossFit workout and her diabetes management one day at a time. She never knows what will be thrown at her, but she is ready for the challenge. 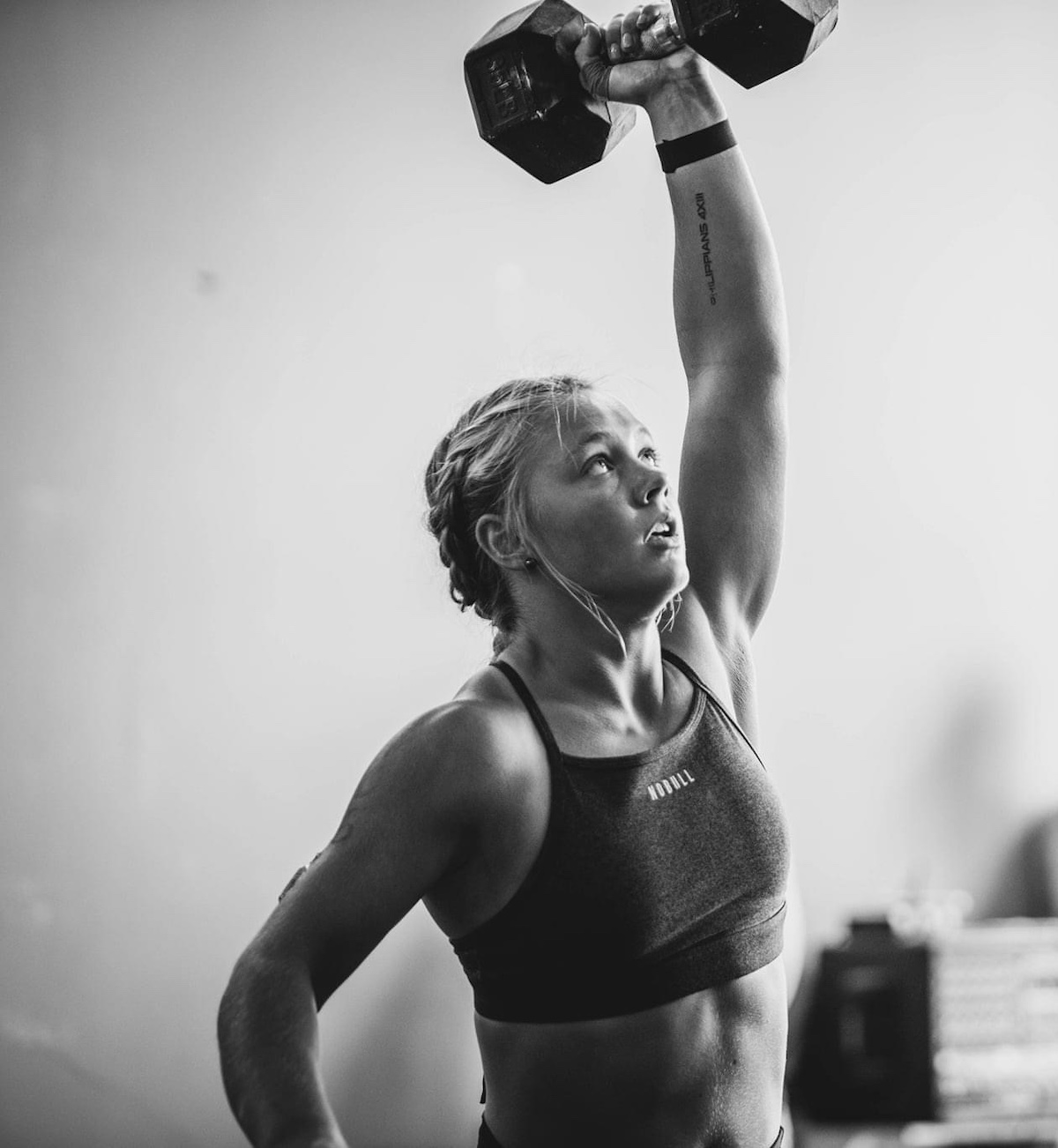 A Fight With Adrenaline

In 2021, Wade finished the Open 13th worldwide in the Girls 14-15 division. She went on to take sixth in the Online Qualifier.

Preparation for her debut at the CrossFit Games was not just about strength and endurance. She also had to figure out what foods to consume to keep her blood-sugar levels consistent throughout each event. From fast barbell-cycling to swimming, she noticed her blood-sugar levels would drop with intense physical activity. To counteract that, she calculated exactly when she needed to eat to prepare for high-endurance events at the Games.

“I had to practice backstroking and eating peanut-butter packets to keep my blood sugar up,” she said. 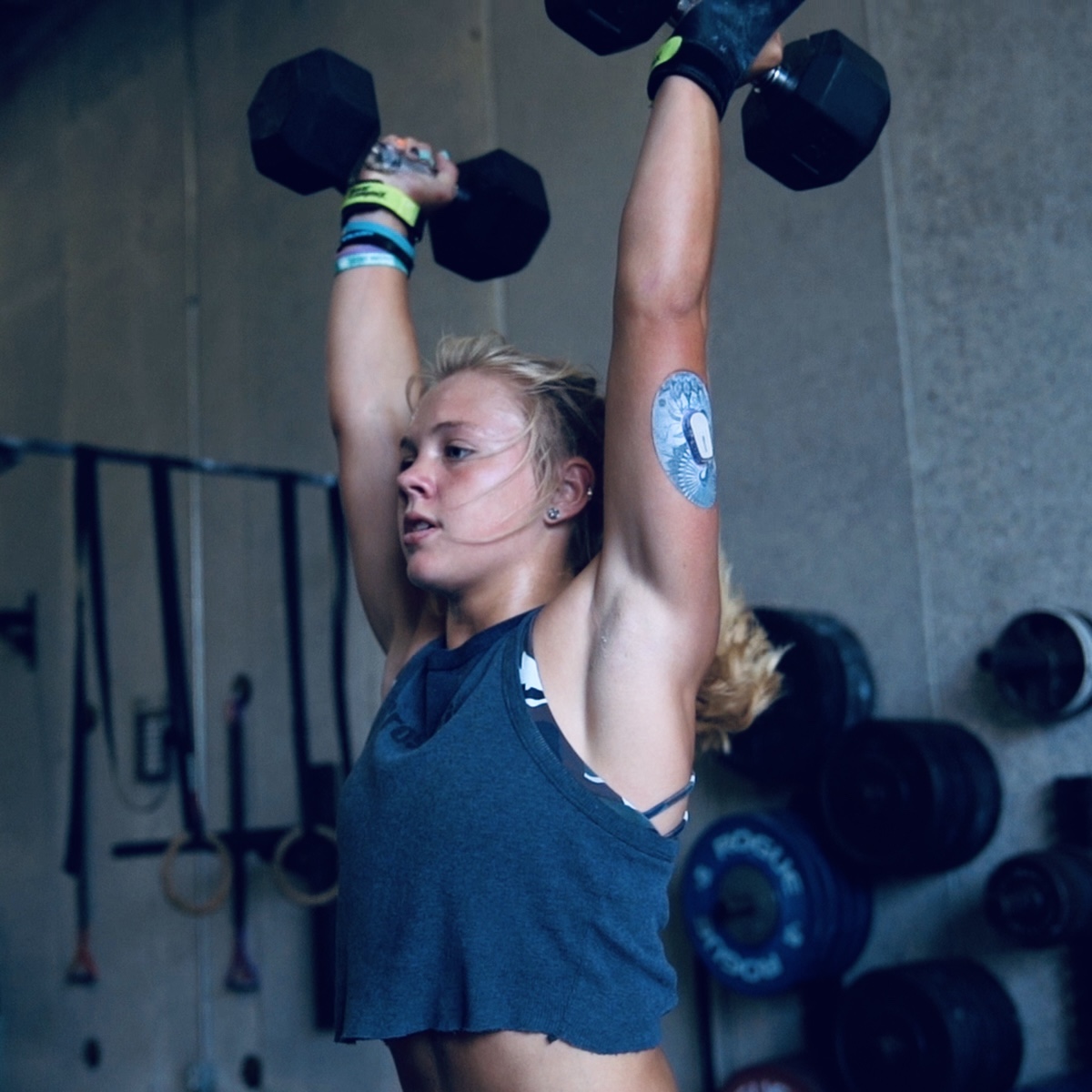 But when Wade stepped onto the competition floor at the 2021 NOBULL CrossFit Games, everything flipped.

Because of the adrenaline of the competition, Wade’s blood-sugar levels were ranging a lot higher than expected. The plan she had developed while managing low blood sugar in her regular training had to be quickly adapted in the new environment.

Throughout the week, Wade’s dad traveled with her into the warm-up area until the athletes lined up before each event while her mom watched on the side, ready to help if Wade’s blood-sugar levels suddenly dropped or spiked.

Wade was allowed to have a phone zipped up in her pocket in case of an emergency and would take her diabetes bag with her on the competition floor, storing it in a safe location while she was competing — “Just in case I needed gummy bears or something to stuff in my mouth,” Wade said with a laugh.

Although Wade was as prepared as she could have been, the CrossFit Games were just as unpredictable as her diabetes. On the second day of competition, the athletes were corralled onto a bus headed to Lake Monona, where Wade would be swimming 300 m for time in the fifth event of the competition. Her insides felt like they were jerking around, and she began to shake as if having an anxiety attack. But this feeling wasn’t just nervous butterflies.

“At that moment, tears started running down my face,” she said.

Usually before a swim, Wade would prepare three hours ahead with three units of insulin. But at this higher blood-sugar level, she couldn’t gauge how much insulin she needed. Although Wade was completely blindsided by her glucose reading, her mom was quick on her feet and told her to take three units of insulin anyways and go swim.

“My mom looks at me and says, ‘God can move mountains; this swim is nothing,'” she said.

When Wade got into the water, she had one thought: Just swim. She finished the event in ninth with a time of 5:12.91.

Throughout the rest of the week, Wade continued to monitor how her body reacted to each event, accepting the fact that she would may need to modify her strategy on the fly. She finished the 2021 NOBULL CrossFit Games in 12th. 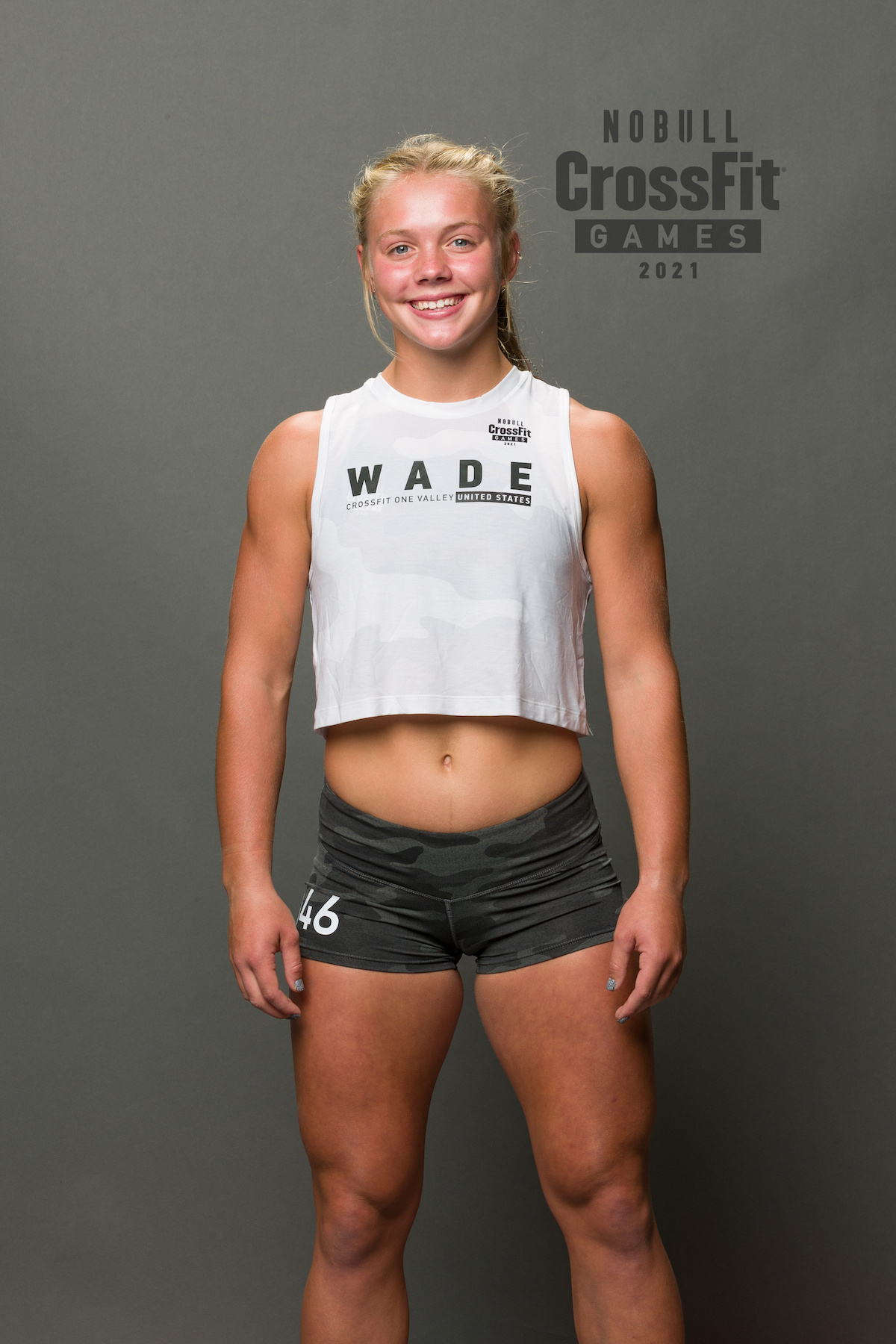 Michel Jean had aspirations to join his high school’s football team in 2016. Hoping to get in shape, 12-year-old Jean joined the CrossFit teen’s group at L’usine Terrebonne. Eventually, he moved up to the adult classes, realizing that he wasn’t solely doing CrossFit to get into shape for football. He loved CrossFit as an end in itself.

In 2019, Jean began to show symptoms similar to what his mother experienced when she was diagnosed with Type 1 diabetes, such as extreme thirst and constantly using the restroom. After pricking his finger with his mom’s blood-glucose meter and showing an extremely high blood-sugar level, he sought out medical help from St. Augustine Children’s Hospital and was diagnosed with Type 1 diabetes. The doctors kept him in the hospital for three days to explain what it meant to be diabetic, how to inject insulin, and how to monitor blood-sugar levels.

At the time, Jean was fully involved in CrossFit, and while sitting on the hospital bed as his doctor was teaching him how insulin worked, all Jean could think about was how he was determined to go to the CrossFit Games next year.

“It motivated me to push harder,” Jean said. 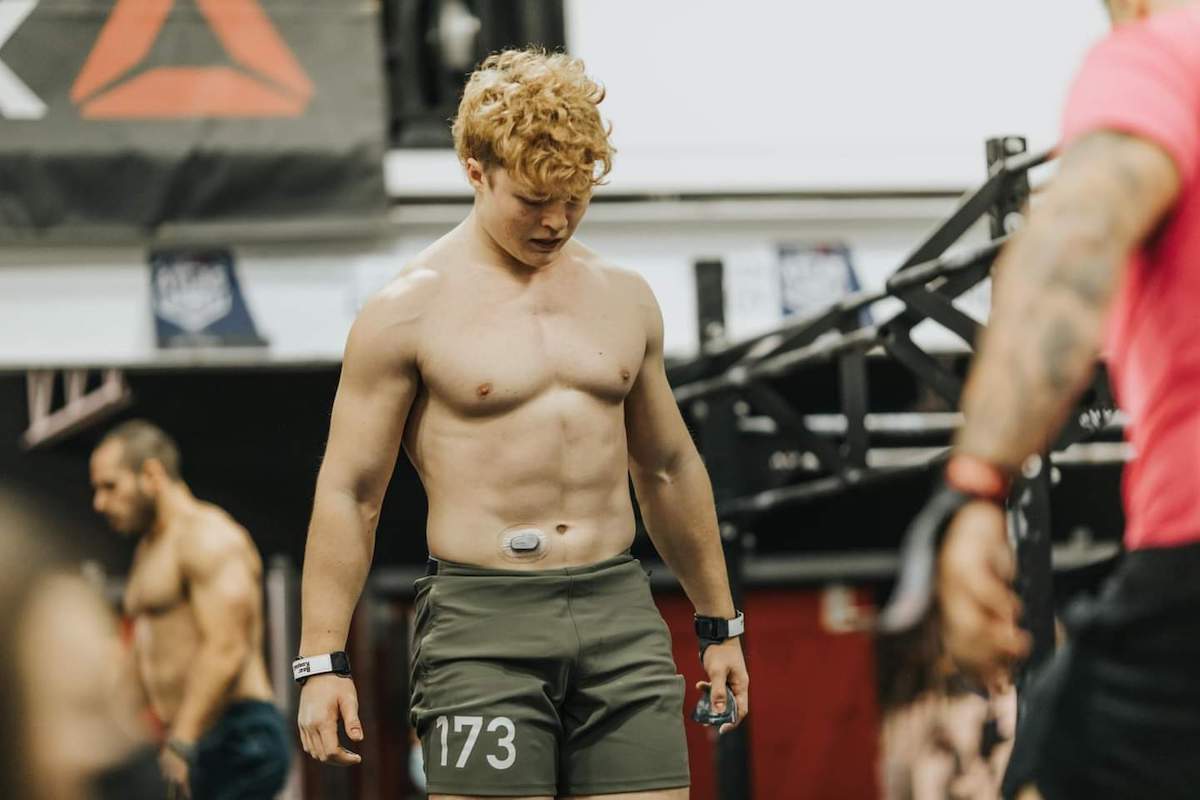 Along with daily insulin injections, Jean manages his blood-sugar levels with a low-carb diet of mostly meat and vegetables.

“It's been three years that I'm on low carb, so I feel really, really good. My body is fully adapted to this diet, and it helps my blood sugar to get more stable so I can train and not stop every time because I'm low or high,” Jean said.

Jean needs a lot less insulin than most diabetics because he is keeping his blood-sugar levels stable with his diet. To monitor them, he uses the Dexcom Continuous Glucose Monitoring system, a device that is inserted into his stomach that sends his blood-glucose readings straight to his phone. With the device, Jean only needs to prick his finger to read his blood-sugar levels if his device fails.

Jean’s CrossFit training helped him land a spot on his high school football team at Armand-Corbeil, and he is now a linebacker at College Andre-Grasset in Quebec, Canada. And after finding a new passion for competitive CrossFit, he has managed to juggle football and CrossFit training throughout the year.

During the football season, Jean trains at L’usine Terrebonne a few times a week, fitting his CrossFit training around four practices a week with games on the weekends. But as soon as football is done, Jean is back in the gym almost every day with double sessions on Saturdays to prepare for the CrossFit Games season.

When the pandemic hit, Jean spent almost every day in the gym preparing for the 2021 CrossFit Games with training partner and two-time Regional athlete Nycolas Joyal. With the help of Joyal, Jean made his dream of competing at the CrossFit Games a reality when he ranked 13th in the Boys 16-17 division in the 2021 Age Group Online Qualifier.

“I had really no idea how to manage diabetes with a competition because I never participated in any other competition,” Jean said. 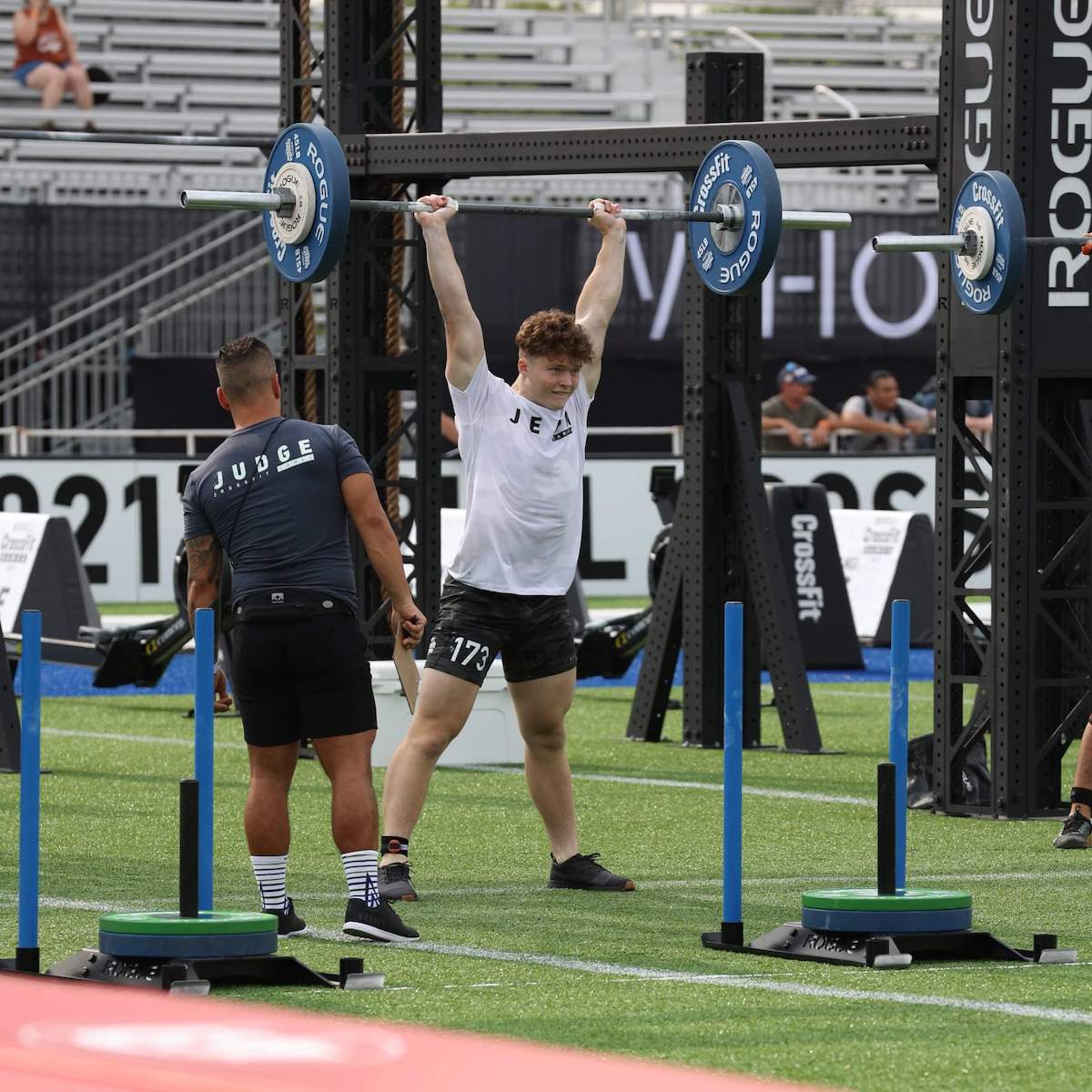 The first test for his division was a 4.5-mile run. It was an event that would normally lower his blood-sugar levels, but with the adrenaline of competition, Jean had no idea if he would be high or low. For good measure, he stuffed a sugar packet in his pocket and lined up with the rest of his competitors.

During the run he began to shake. Mistaking the symptoms for stress, he emptied the sugar packet in his mouth and continued running. However, the shaking was a symptom of high blood sugar, and the addition of the sugar packet spiked his levels even more.

“The time between events was very small. … If you take insulin too close to your workout, you're gonna crash and go low, so I wanted to eat hours before the workout, but I didn't know when the workout was going to be. So that was really hard,” Jean explained.

After three days of grueling competition, Jean finished the 2021 NOBULL CrossFit Games in 15th, and although he said he didn’t finish as high as he wanted to, he learned a lot about managing his symptoms and what he needed to train for the next time he steps onto the competition floor. 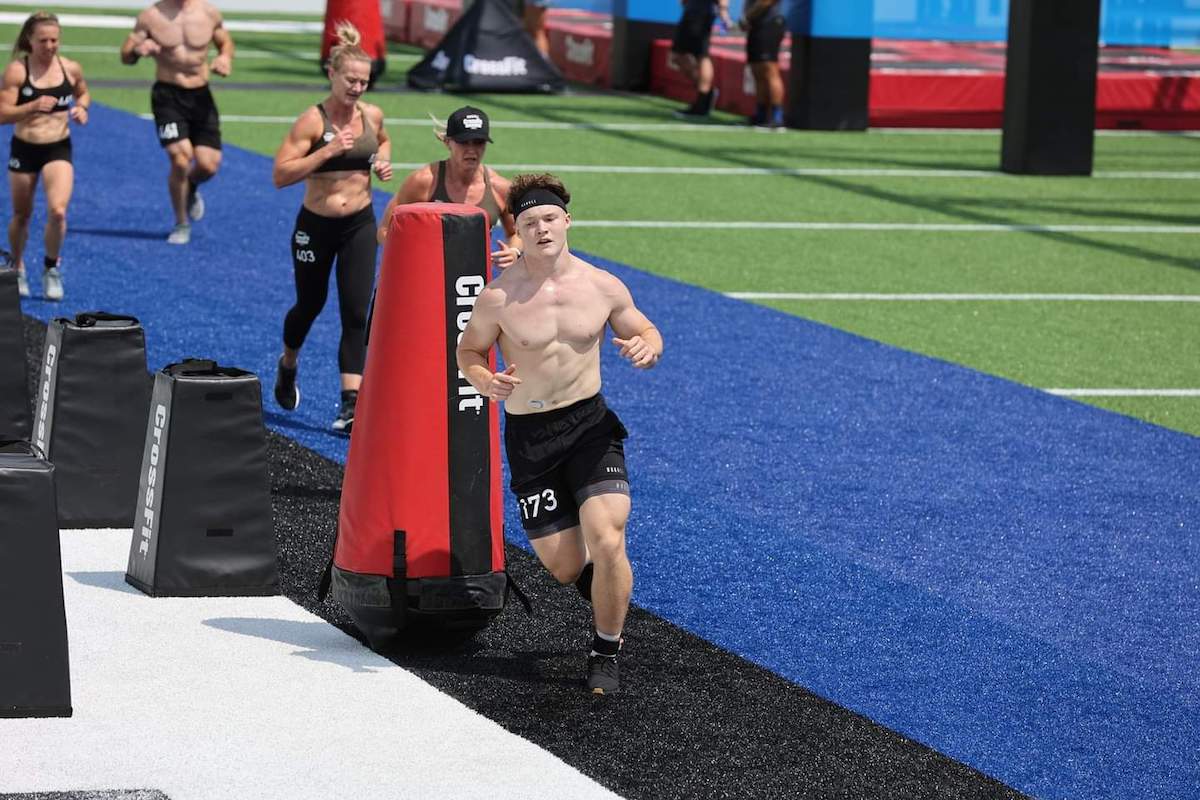 Facing the unknown and unknowable is part of the challenge for competitive CrossFit athletes. That challenge is compounded for athletes with diabetes. Blood-sugar levels could fall or spike at any moment, and adrenaline can throw any preparation out the window.

But despite the added challenge, Wade and Jean are a shining example of what's possible. They prove that a diabetes diagnosis isn't a career ender. They prove that athletes with diabetes can compete and do well, even at the very highest levels of competitive sport.

Join Wade and Jean in the Open.

If you're a CrossFit trainer, check out this resource for training diabetic athletes.