Travis Mayer started 2020 as a five-time CrossFit Games athlete, excited for the season, and ready to put in the work to qualify for his sixth Games. He’d placed 12th at the 2019 CrossFit Games and took 14th in the 2020 Open.

Mayer was deep into training for the next stage of competition — the West Coast Classic in California — when COVID-19 began to take hold. First the schools closed, then gyms, bars, restaurants, and eventually almost every event planned for the spring of 2020 was canceled, including the West Coast Classic.

Once this happened, Mayer figured the competition season was over.

“I built a treehouse for my boys and just kind of stepped back (from training) because I didn't think the Games were going to happen,” he said.

The season had started in 2019 with the Open, held from Oct. 10 to Nov. 11. After a summer of coronavirus delays, the final stage of the Games didn’t take place until October 2020, a full year later.

For Mayer and other experienced CrossFit Games athletes used to planning their year with precision, making sure their strength and conditioning peaks at competition time, 2020 brought uncertainty and confusion.

Now that we’re well into the 2021 season, Mayer and fellow Games athletes Kristi Eramo O’Connell and Dani Speegle reflect on the turmoil of 2020, how it affected their 2020 season, and the continued impact it’s had on the 2021 season and their overall perspective.

“A Punch in the Face”

Mayer said he lost his drive when the Games were initially canceled. He stopped training, sure he’d have the year off. Then CrossFit announced the Games were back on, and Mayer said the return of the Games felt like a punch in the face.

“Thankfully, I qualified out of the Open to be at (Stage 1 of the) Games and still compete. I gave my best effort and executed probably the best I possibly could with where my fitness was at, but I just wasn't on top of things,” he said.

Mayer finished 19th in Stage 1, which meant his 2020 season was over in September. (Only the top five men and women competed in person in 2020.) It was not the outcome he’d imagined, but he was determined to find something positive out of the experience.

“You can look at it two ways — motivation to get better and not let that ever happen again or kind of throw in the towel,” Mayer said. He said he didn’t ever want to feel unprepared again. He wasn’t done competing.

For Kristi Eramo O’Connell, then a three-time individual Games competitor, the hardest thing about the 2020 season was the constantly changing schedule. She started the year thinking she would peak in the summer for the Games,

“And then I was like, OK, no, it's going to be one of these weekends in September ... towards the end of September. So I qualified in the Open in October (of 2019) and that made for almost a 12-month season,” O’Connell said.

“So, just training as an athlete was very, very challenging,” she said.

Even though she didn’t compete at the Games in person — she took ninth in Stage 1 — O’Connell said she felt more physically and mentally exhausted than after a typical Games season. O’Connell usually finishes the Games excited to work on her weaknesses and get back to training, but she found the uncertainty of 2020 exhausting.

“We had endured the stress of the season without actually having that end competition,” O’Connell said.

“I needed a break. It forced me just to step away because I was coming up on mental and physical burnout,” she said.

Different CrossFit Games athletes experienced the changes to the 2020 season differently. For Dani Speegle, who first competed in the Games in 2019, seeing event after event canceled came as a relief. Speegle tore her labrum in March of 2020 and was already planning on sitting out the season. Two weeks after she got a stem cell treatment in her shoulder, the world shut down.

Speegle was devastated by the loss associated with the pandemic. Nevertheless, she couldn’t help but feel relieved that she wasn’t going to be left behind.

“I had to feel like the timing for me was pretty lucky that I didn't have to sit and watch everybody else go through all the season and compete, and travel, and do all the things that I wanted to be doing,” Speegle said.

Her feeling that she’d lucked out didn’t last long, however. Speegle had qualified for the first stage of the 2020 CrossFit Games out of the Open, and as the online competition grew nearer, her shoulder felt about 85 percent healed. Then, a month and a half before Stage 1, she stepped on her own foot doing double-unders and badly injured her ankle.

Speegle had to do seated workouts for weeks and then couldn't do any running, which is her weakness. She struggled through the running in the Stage 1 events and finished 13th, outside of the top five eligible for the final stage of the Games.

“I was furious. I was so heartbroken,” Speegle said.

“I had worked all year to heal my shoulder and literally tripped at the finish line and hurt something that was really detrimental to me as an athlete,” she said.

Pressing Reset and Rekindling the Spark

After her 2020 competition season ended, O’Connell did something she hasn’t done in years.

She took a break.

“I didn't touch a barbell, I didn't do any ring muscle-ups, no handstand push-ups, no high-skill stuff,” O’Connell said.

Instead, O’Connell did class workouts at her gym, CrossFit Polaris. She went running, took her dog on walks, rode her bike, and spent lots of time outside.

“I was remembering why I love fitness again, because sometimes at the end of that really long season, it can just be like, ‘Why am I doing this?’ And you almost have to go back to the drawing board and reflect on what and why and what's next. And that's what I was trying to figure out,” she said.

While she rested, O’Connell said she wasn’t sure she’d return to competition in 2021.

“After last season being so long, and it just took so much out of me, I was actually on the fence about competing this year,” O’Connell said.

Knowing the amount of time and energy it takes to train for the CrossFit Games, O’Connell hesitated, enjoying her time off.

Then in February of 2021, she made up her mind — she was ready to compete.

Once she started training, O’Connell was surprised by how good she felt.

“I was so mentally and physically refreshed when I finally made the decision to get back into it, I’ve kind of just been able to hit the ground running, and I'm feeling pretty excited about it,” O’Connell said.

After those first few workouts back, O’Connell said she was more sore than she’d ever been in her life, but she discovered she was enjoying herself. She was training because she wanted to, not out of a sense of obligation.

The downtime paid off — O’Connell placed fourth in the world in the Open and then 10th in North America in the Individual Quarterfinal. She’s competing in the second weekend of Semifinals at the Granite Games from June 4 to 6.

O’Connell is excited to have a season where she can plan when to ramp up intensity and volume, and she’s also looking forward to doing Murph with her gym, which she frequently misses because of the Regionals schedule. Her goals for the Games this year are to stay in the top 10 — she finished ninth in 2018 and eighth in 2016 — and hold her own against the new names and faces on the competition field.

“I’m just kind of viewing it in that overall picture and trying to focus on the last few years, especially as I've gotten older, just making sure we’re not just doing the same thing but we are adjusting as time changes,” she said.

After the 2020 season ended, Speegle took some time off and then participated in an online competition hosted by Loud and Live in December of 2020, but she felt as if something was missing.

“I didn't get excited for it,” she said, “and I walked through the workouts. I didn't push like it was an actual competition.”

Speegle took another step back and decided to move from Orlando to San Diego. Once she started training with the athletes at Invictus, her love of training returned.

“From that point it clicked,” she said.

Speegle finished seventh in the world in the Open and second in North America in the Individual Quarterfinal. She said she’s now very excited for the first in-person competition of the year, which for her will be the West Coast Classic from June 18 to 20.

Mayer returned to training for the 2021 season with a new approach. Instead of one coach, he decided to hire multiple coaches to collaborate and create structure. He now has one coach writing his strength progressions, one coach writing his EMOMs, and his longtime coach, Max El-Hag, handling the high-skill gymnastics.

This change was exactly what Mayer needed to find his motivation.

“I just clicked really well with how it was all kind of structured,” he said, “ and it relit a fire inside and got me really excited.”

The other change Mayer made was working with a mental coach to help him better prepare mentally for his training session. The impact of these changes, Mayer said, has been dramatic.

He said he used to hold back slightly when training and competing, always leaving just a little in the tank.

“I think it came from a place of fear,” he said, “because you never know what's going to happen if you fully dive in. If you come up short, that's devastating, but it also sucks looking in the mirror and to think, ‘I had a little bit more to give and I didn't do it.’”

Instead of focusing on his placement or what other people are doing, Mayer has placed his focus on how he’s going to approach each workout. He thinks about what he can do to set himself up to have the best execution and then keeps his focus on that plan.

His new strategy worked. While Mayer placed 96th in the Open, he took first in the Individual Quarterfinal.

Mayer competed in the first weekend of Semifinals. He took the competition floor at the Mid-Atlantic CrossFit Challenge from May 28 to 30. Although the last year was challenging, like O’Connell and Speegle, Mayer said the year away from the Games gave him time to reflect and refocus.

“It just kind of gave me a good punch in the face of like, hey snap out of it. Like you need to get back on track and get focused, because you don't know how long you have in the sport and how much time you have, so make the best of it.”

Mayer's effort to refocus must have been effective, because he ended up taking fourth place in the Mid-Atlantic, securing his spot at the CrossFit Games next month.

The coronavirus gave many of us a new perspective, forcing us to be adaptable and flexible and teaching us to focus on what truly matters. For Mayer, O’Connell, and Speegle, the frustrations of 2020 became fuel for 2021, giving them a deeper determination and reminding them why they love competitive CrossFit.

The CrossFit Games season continues with Week 2 of the CrossFit Semifinals. Catch Kristi Eramo O'Connell on games.crossfit.com, Facebook, or the CrossFit Youtube channel this weekend as she competes at the Granite Games. Click here for more info on how to watch. 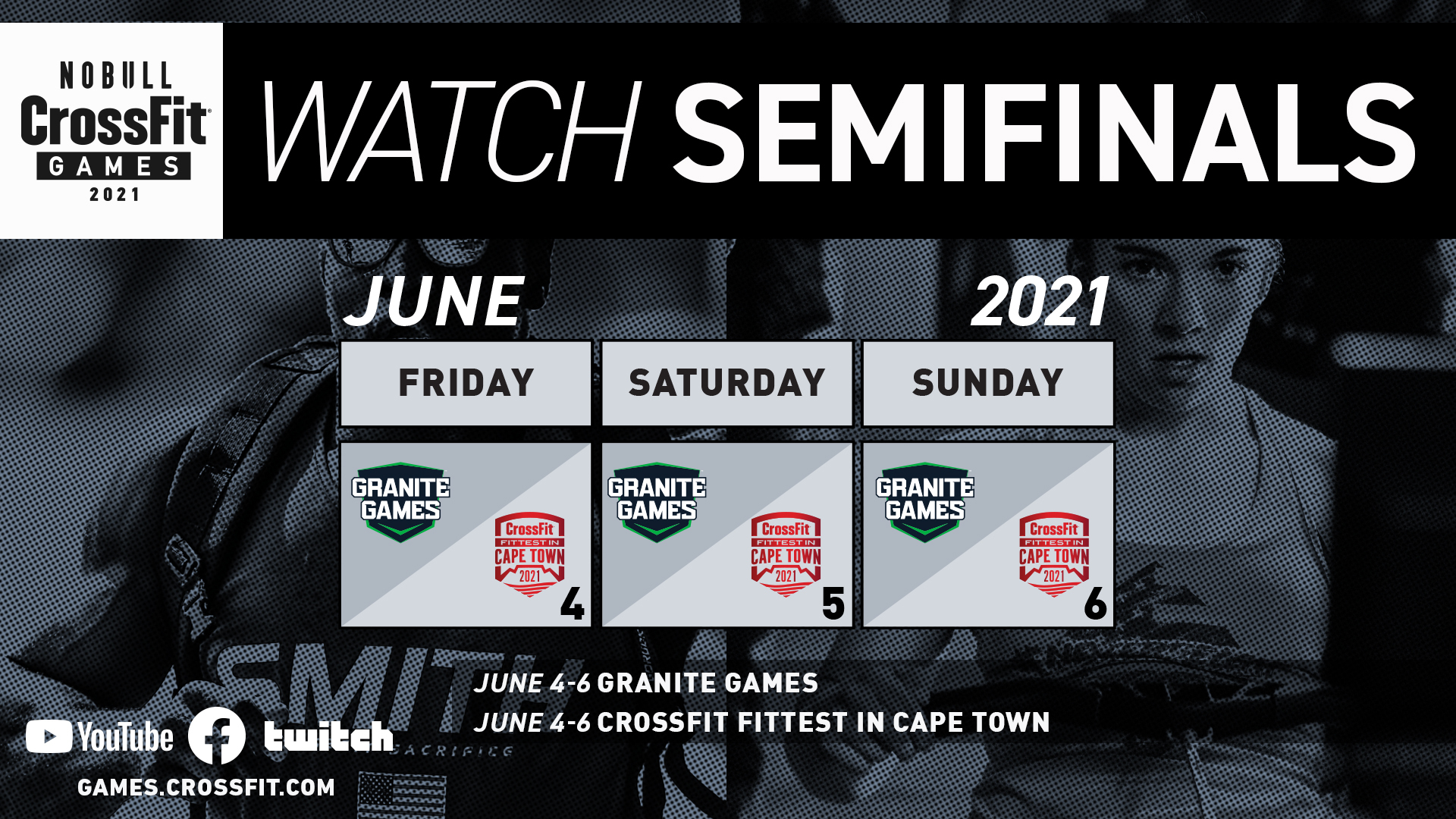