It was 2005, and Lauren Taylor was a high-school junior on the basketball court.

A renegade ball soared her way, and she dove for it.

Meanwhile, an athlete on the opposing team dove for Taylor instead. The impact broke Taylor’s collarbone. The break was clean; the recovery, less so.

Once her collarbone healed, Taylor returned to the court — as well as the field, where she played forward on the field-hockey team. But due to the repetitive motions inherent to the sport, she began experiencing a pins-and-needles sensation in her right hand as well as a burning sensation that tracked from her neck all the way down her arm. Over several months, she went to different physicians to try to figure out what was going on. Months turned to years, and finally in 2009, she was diagnosed with neurogenic thoracic outlet syndrome (NTOS), which is characterized by the compression of the brachial plexus, a network of nerves originating from the spinal cord that control muscle movements and sensation in the shoulder, arm, and hand. Because she was a high-caliber athlete, Taylor was able to continue playing even with the symptoms.

Doctors said Taylor’s only options were physical therapy or surgery to remove the anterior and middle scalene muscles of her neck as well as her first rib. She wanted the surgery but struggled both to find a physician willing and able to perform such a specialized procedure and to get her insurance to cover the expense, so she spent the next few years going to physical therapy multiple times a week.

Despite her condition, Taylor went on to play Division II collegiate field hockey at Shippensburg University in Shippensburg, Pennsylvania. Not only did Taylor play, but she became a starting forward who led the conference and nation in assists.

In 2012, three years after her diagnosis, Taylor found a surgeon willing to perform the procedure. Both she and the doctor suspected it was too late — by that time, her hand was severely discolored from poor circulation and nerve damage — but decided to move forward anyway.

The day of the surgery, something went horribly wrong.

Over the past three years, scar tissue had developed around the bones and muscles in Taylor’s neck  as well as her subclavian vein, a deep, paired vein that transports blood from the arms and shoulders back to the heart.

“So the doctor had to physically peel everything back like an onion, layer by layer,” Taylor said. “And unfortunately, he didn't realize my muscle was attached to my subclavian vein,… And he ripped me open, and I bled out on the table for a good chunk of time.”

Fortunately, the surgeon was able to control the bleeding — but said he believed she only survived because of how healthy an athlete she was going into the operating room. Ultimately she recovered and went back to playing field hockey, but the permanent damage to her nerves was already done.

Back to Normal — Or So She Thought

Despite the damage — and occasional numbness in her hand — Taylor would not be stopped. Less than a year after nearly bleeding out on the operating table, she helped her team win Shippenburg’s NCAA National Championship title in 2013.

After graduating from university, Taylor satisfied her competitive appetite with various road races but fell in love with Spartan Race obstacle courses in 2019. Not only was she good, she was dominant in her age group, taking the podium in eight out of the 14 races she entered and ranking ninth globally in her age group.

While Spartan Races were on pause in 2020 due to the COVID-19 pandemic,Taylor trained at a gym that combined both Spartan Race training and CrossFit. One day, she was driving to the gym, fully stopped at a stop sign and waiting for a clearance to turn right on a four-lane highway. Glancing in her rear-view mirror, Taylor could see a Mack dump truck coming full speed toward her — but with oncoming traffic, she had nowhere to go. Knowing the fate that was coming, Taylor lifted her foot off the brake, hoping to soften the blow. One of the last things she remembers is her head slamming back against the headrest.

Within 48 hours, Taylor began experiencing massive headaches, dizziness, vertigo, and pain in the back of her head and neck — she knew something was very wrong. But because of COVID delays, Taylor had to wait three months before she could get in with a neurologist.

After seeing the neurologist, Taylor was diagnosed with cervical and lumbar radiculopathy, traumatic brain injury, and acquired ataxia. She also has cervical lumbar bulged discs. With her life changed and unable to be the athlete she was, Taylor battled depression and struggled with her identity for over a year. The constant questions from friends and competitors asking, “Are you coming back?”and “Are you going to run Spartan?” and then constantly having to say “no” ate away at her.

Additionally, it was difficult for people to understand what Taylor was going through.

“Because I have acquired ataxia from my brain injury, I don't look like I have anything wrong with me,” she said. “People are like, ‘Oh, you're fine, you're fine.’ And I'm like, ‘No, I'm not all right; live a day in my shoes and then tell me if I'm all right or not.’”

Going for the Open

Luckily for Taylor, she had an amazing support system of family and friends that wouldn’t let her stay in that dark place. At her friends’ urging, she got back in the gym, doing CrossFit a few times but modifying all the movements. That summer, a friend invited her to spectate at the 2021 NOBULL CrossFit Games. With that weekend free, Taylor decided to go, and that’s where she learned about the Adaptive division.

Fast-forward to the Open: her friends pressed her to sign up, believing she could qualify for the Games in the Adaptive division. Taylor was reluctant and brushed it off, but the day before the deadline to sign up, she registered — and went on to finish third in North America and fourth worldwide in her division. Maybe her friends were right, she thought.

At that same time, Taylor was moving to be closer to her sister, so she joined CrossFit King of Prussia and began training with gym owner and CrossFit Seminar Staff Trainer Aimee Lyons. Between the Open and Semifinals, Lyons helped Taylor learn how to connect butterfly pull-ups, re-learn to string together toes-to-bars, and master double-unders. At Semifinals, Taylor placed fifth and earned her spot at the 2022 NOBULL CrossFit Games, a feat she gratefully credits her coach for.

“Thank you for helping me find my niche and getting me out of that weird place,” she wrote to Lyons in a letter before coming to this year's Games.

Laying It All on the Floor

Now in Madison, Taylor’s vivacious, determined spirit is palpable, and she’s fired up to compete. When asked what her goals were coming into the Games, Taylor didn’t hesitate. “My goal is to be on the podium here,” she said. “I want it, and I want it bad.” 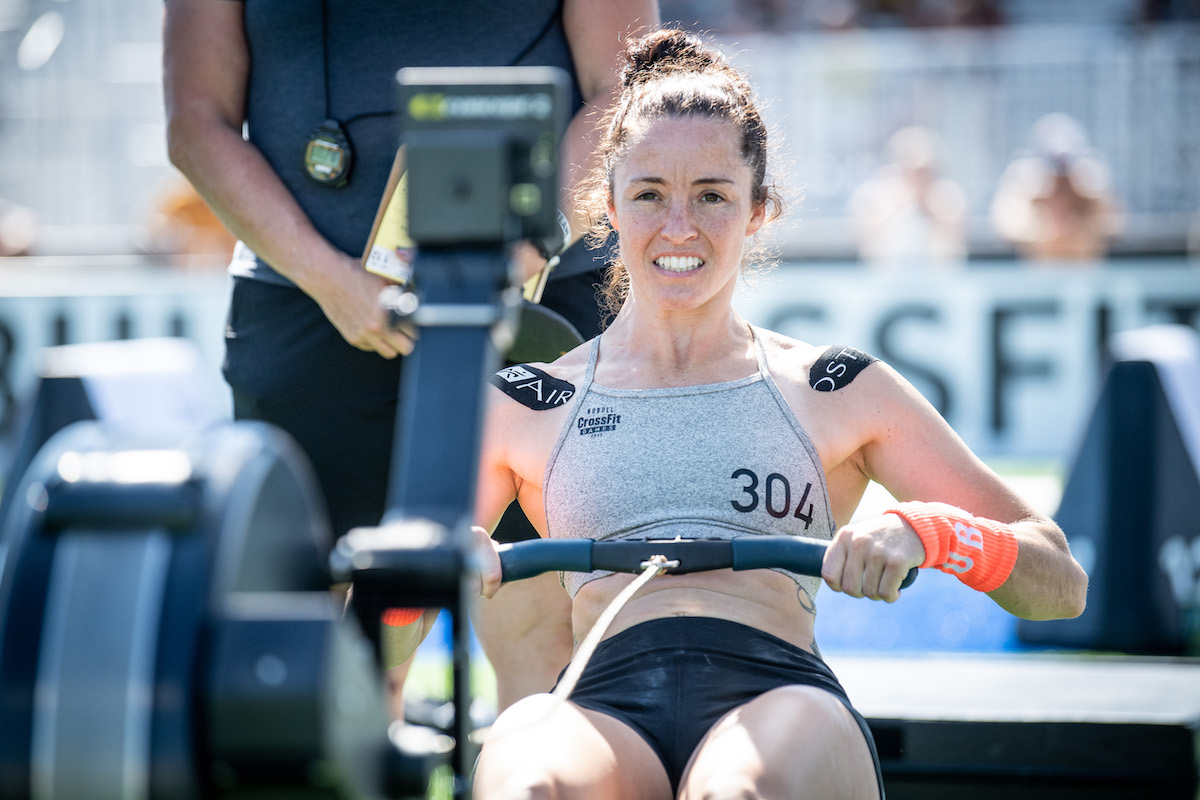 At the end of the second day of competition, Taylor sat in second place with one event win and two second place finishes after five events — and hopes her story will inspire others to never settle.

“It’s a huge honor (to compete at the Games), and I’m thankful,” she said, describing the messages of love and support she’s received from friends and followers. “While I was struggling, people saw (my) perseverance … and dedication to not settle because my life changed. … It sounds so cliche, but don’t give up. Be comfortable being uncomfortable.”