Equal Play in the Pool 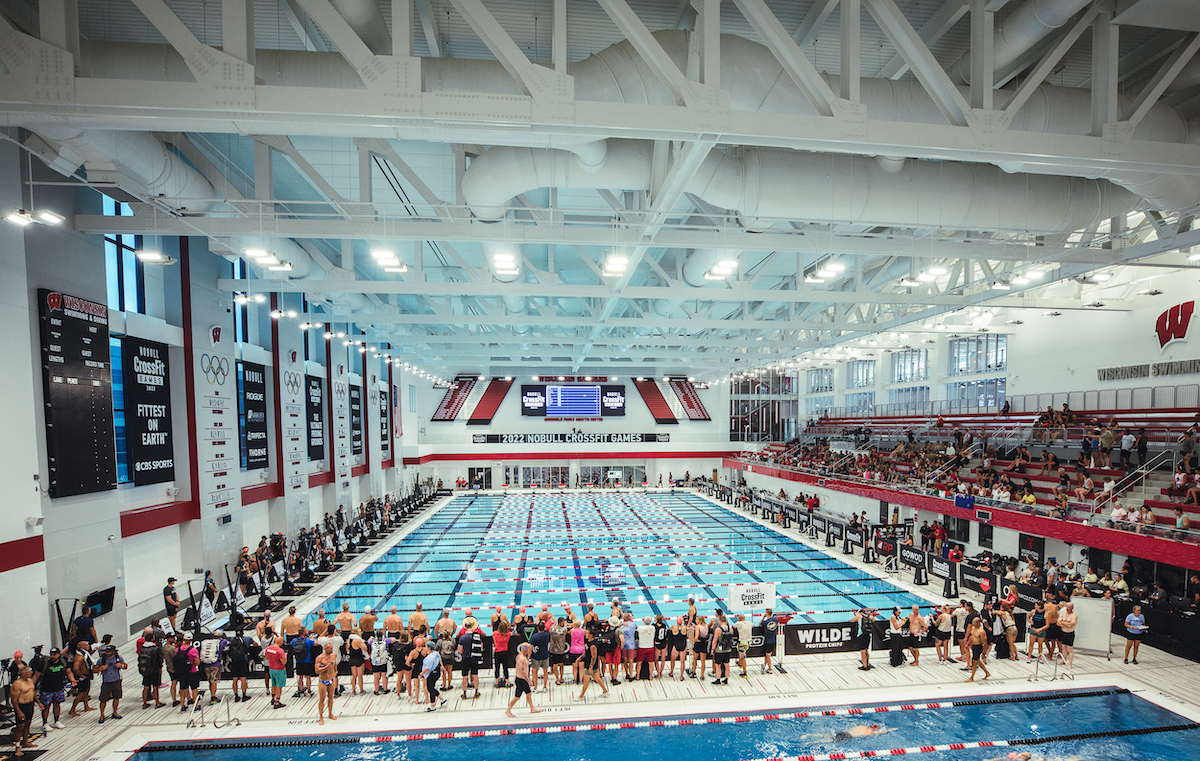 Don’t worry, you aren’t alone. There were actually 21 individual men that Luke Reeson can claim victory over.

Who is Luke Reeson? He’s a 34-year-old adaptive athlete in the Lower Extremity division who took a bullet to both legs during his 12-year run as a British infantry sniper.

And on Saturday, he ripped off 145 calories in Rinse ‘N’ Repeat, the one event at the 2022 NOBULL CrossFit Games that every athlete attempted.

No adjustments based on age or gender or disability.

Competing at the Games for the first time, he tied Noah Ohlsen and Bayden Brown for 17th among all male athletes for the most calories — 145 —  in Rinse ‘N’ Repeat.

Not bad company to keep. 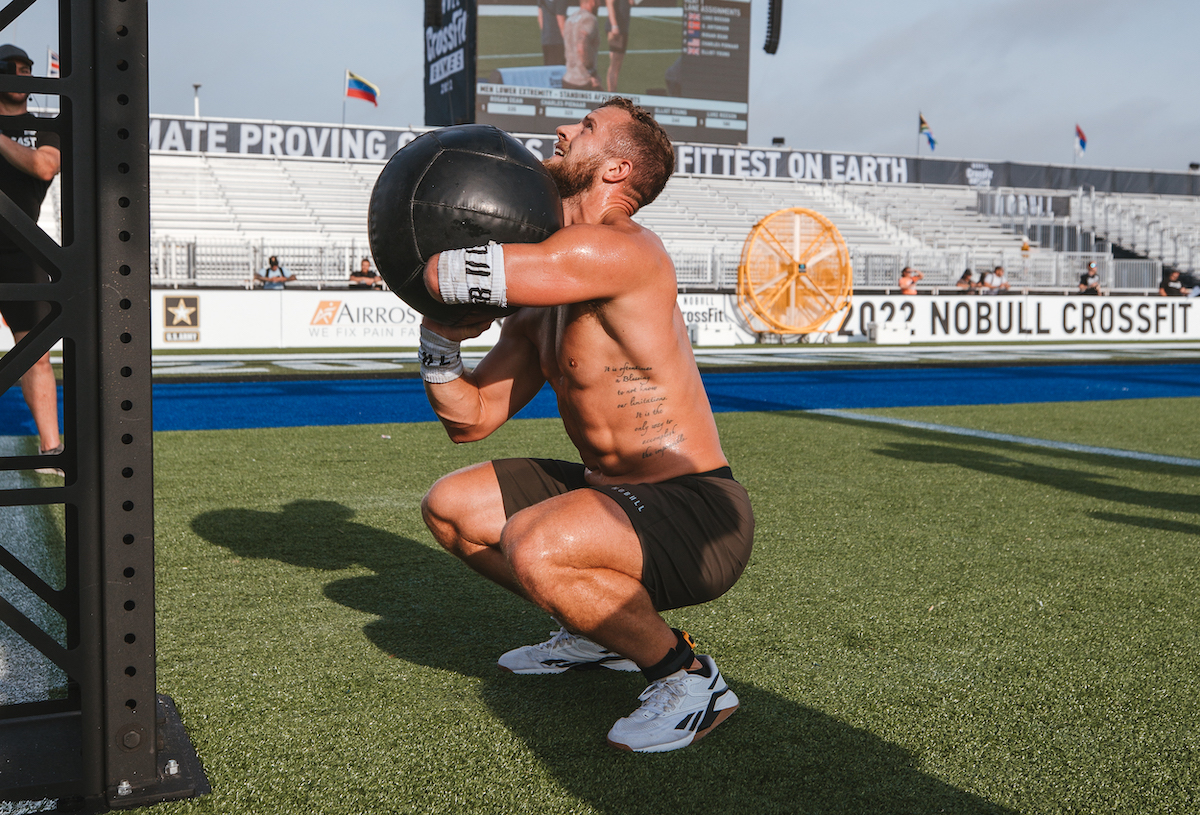 Sounds terrible — yet very familiar to CrossFit athletes around the world.

But instead of 150 reps straight, CrossFit Competition Director Adrian Bozman threw six 168-foot walks between the sets of 50, 40, 30, 20, and 10 reps: twice with an armful of Husafell bag, twice with a Jerry bag in each hand, and twice pushing a sled.

Oh yeah — it was also outside at North Park on the turf, where the sun added another element: Heat (and don’t forget the humidity, which topped out at 88% on Saturday).

For the Age-Group, Teen, and Adaptive divisions, that was how they started the third and final day of their championship, the sixth event of their eight-event display of fitness and fortitude.

“We are not playing around with these sleds,” on-field announcer Derek Forrest said to the crowd.

At that moment, 18 of the 19 combined competitors in the men’s and women’s 45-49 divisions were struggling to push their sandbag-topped sleds, the halfway point on the 16-minute time cap speeding by.

“Making them fight for every inch.”

Yes, the weights of the carries and pushes varied by age and gender, but the mental and physical fortitude to push through did not.

If you entered the event leading your division, the person immediately chasing you was directly behind you on the wall balls, while the holder of third place heading into the day was directly across from you — giving both competitors a chance to see where the other was, to look into their eyes, to show them their mettle.

As the horn sounded at the end of the 40-44 divisions’ race, Kelly Friel sat an agonizing five yards from the finish, her sled on the blue turf but not past the black. She did not fall to the ground as so many others had but rather used the handle of the sled to spin around and sit on top of the bag, exhausted, ready to sign a scorecard and go find an ice bath.

Technically, the event was for time, but for most, it was an AMRAP.

Some division leads changed hands during Carrying Karen. Some saw their leads widen. Few finished the entire test. All saw the post-event camaraderie and commiseration common in CrossFit boxes around the world and throughout the Games.

Maybe it was Karen (and the crowd in the North Park Stadium) carrying them.

The Clock Was No Threat 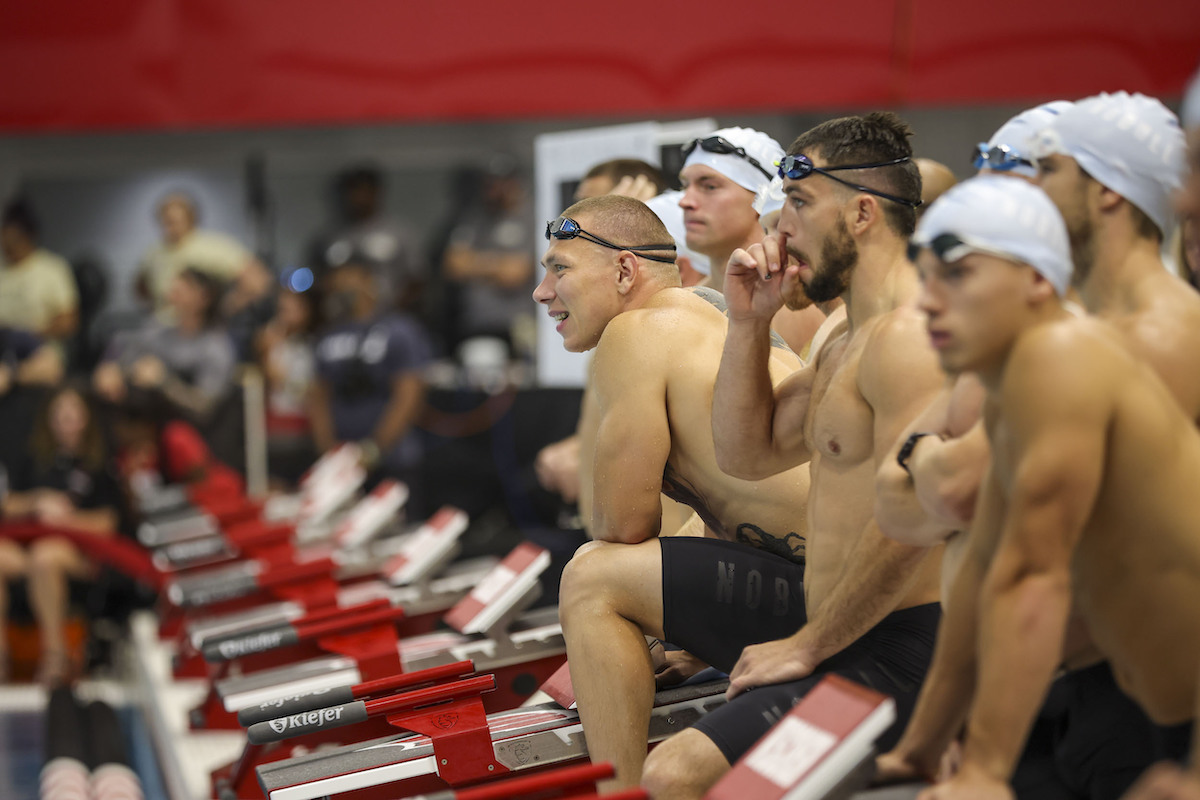 The points don’t start counting until the last four minutes. It’s not the competitors you need to worry about. It’s the clock.

For Roman Khrennikov, the clock was no threat.

The men were watching the feet of the Far East Throwdown winner each 50-yard swim in Rinse ‘N’ Repeat. Once Khrennikov hopped out of the pool, it was effortless for him to accumulate the buy-in calories before returning to the familiar water — he’d been training in the University of Wisconsin’s Nicholas Recreation Center for months.

Once he reached the point of the workout that mattered most, Khrennikov was prepared to enter the pain cave. He had been waiting for this moment for five years.

Without even removing his goggles, he got right to work, pulling a nearly 1,900 cal/hr rate.

Upon the sound of the buzzer, Khrennikov looked to the crowd, pointing at himself to confirm his win. He received the thumbs up. Khrennikov had won his first CrossFit Games event in front of a live audience.

But this came as no surprise.

“I’ve been visualizing this moment since last night,” he said. 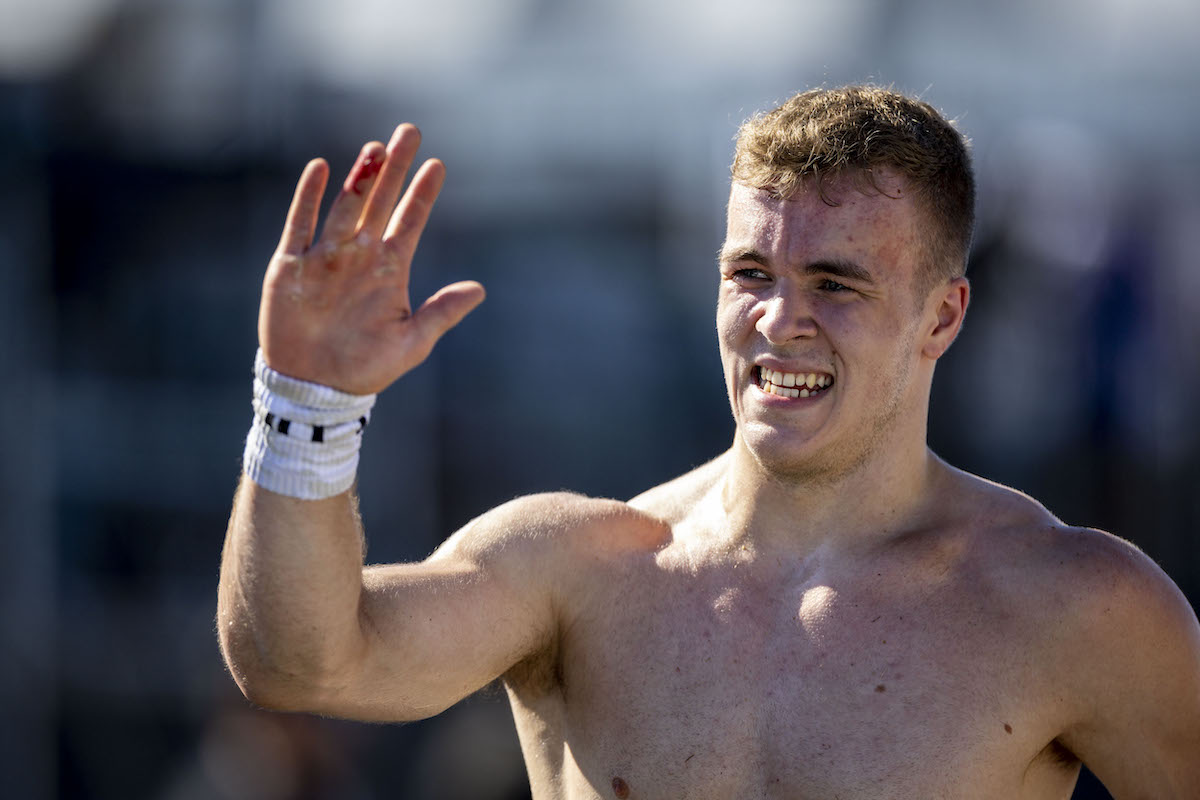 Iceland has seen some of the most notable comebacks in CrossFit Games history. In 2015, Katrin Davidsdottir won the Games after failing to qualify the year before. In 2022, we saw two-time champ Annie Thorisdottir’s return to competition after giving birth to a daughter and openly sharing her struggles overcoming postpartum depression.

In 2022, another Icelandic athlete made a comeback of his own — teenager Rökkvi Guðnason.

At the start of the 2022 season, Guðnason faced burnout and injury, which took a toll on his mental health.

“That was one of the hardest times of my life,” he said. “My body weight went up to 230 lb, and I was struggling mentally and physically — especially mentally.”

In the Boys 16-17 division, Guðnason began his comeback in the Open, where he finished 60th. He improved on his finishes in each phase of qualification, taking 14th in the Quarterfinals and third in Semifinals — with a mission to hit the podium’s top spot in Madison.

Guðnason proved early this week that he was ready to be back, taking a first-place finish in the opening event for teens: Three Ways Down.

“Winning the first event was a huge comeback and statement for me,” he said.

On Day 3, we saw Guðnason take first place again with a dominant finish in North Park in Carrying Karen, leading the event — one that required an abundance of grit — from start to finish.

Despite finishing lower than he’d wished — he ended the weekend in a respectable sixth place —  Guðnason impressed the crowd with his athletic prowess as well as his his self-awareness, vulnerability, and fearlessness in the face of adversity.

“I know how to deal with failure and how to come back,” he said. “And I will.” 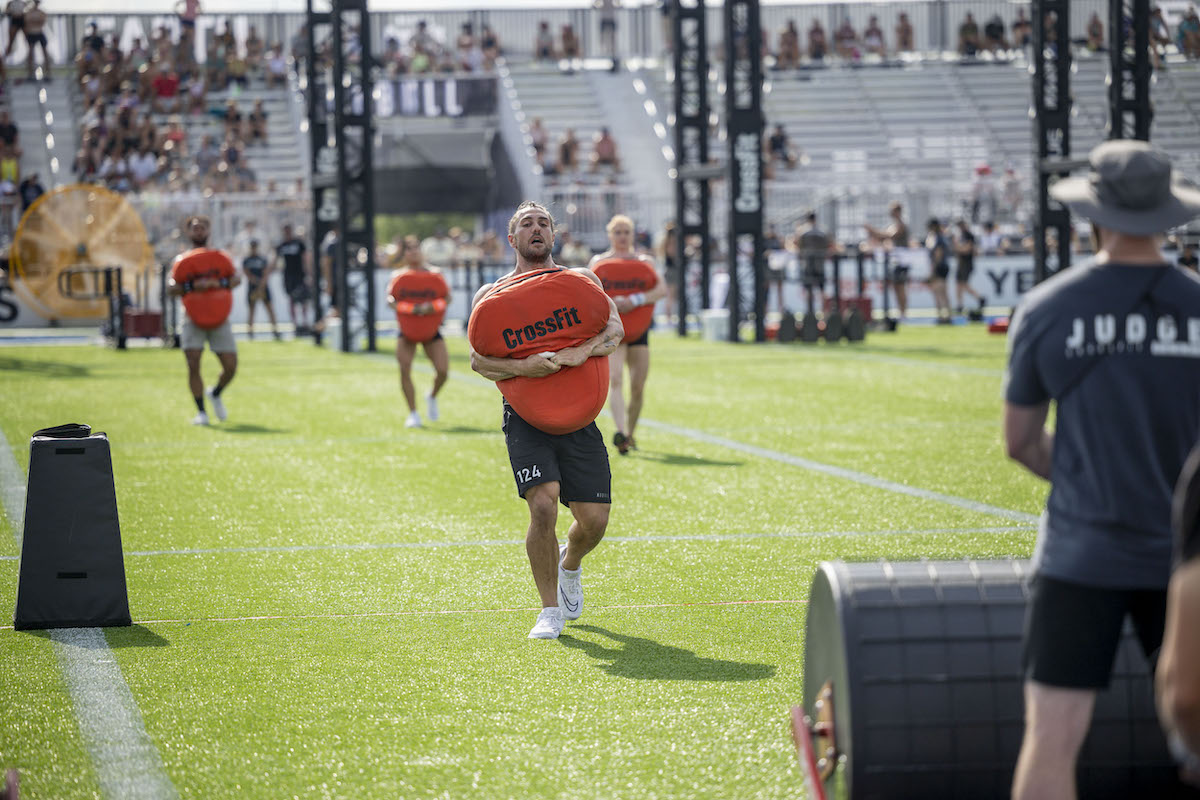 Mayhem vs. Reykjavík. The storyline we have heard since the announcement of Annie Thorisdottir’s super-team creation in Iceland.

Could team Reykjavík really bump Mayhem Freedom off top of the podium this year? The time has come to find out.

The four powerhouse athletes backed up an early 30th-place finish in Event 2 — Pegs & P-Bars — with top-three finishes for the next five events. On Day 2, we saw Reykjavík take three third-place finishes and two second come Day 3, a continuous build in momentum.

Heading into the final day of competition, Reykjavík is 27 points back from a podium position. They might not boot Mayhem from its throne, but the brand-new team could stand on the podium in its very first year.

It will all go down tomorrow.

Watch the Final Day of the 2022 CrossFit Games