It’s good to have a morning routine. For a time, Chelsey Hughes started her day by rearranging the furniture.

First, she flipped her small sofa on its side and pushed it into the bedroom of her 300-square-foot apartment in the Chelsea neighborhood of Manhattan, New York.

Next, she pulled out her CrossFit Games name-placard mat — earned in 2017, when she took 40th at the Games — and unfurled it on the floor between the kitchen sink and the small bed where her dog, Champ, looked on. Gotta protect the hardwood.

Then it was time to work out. 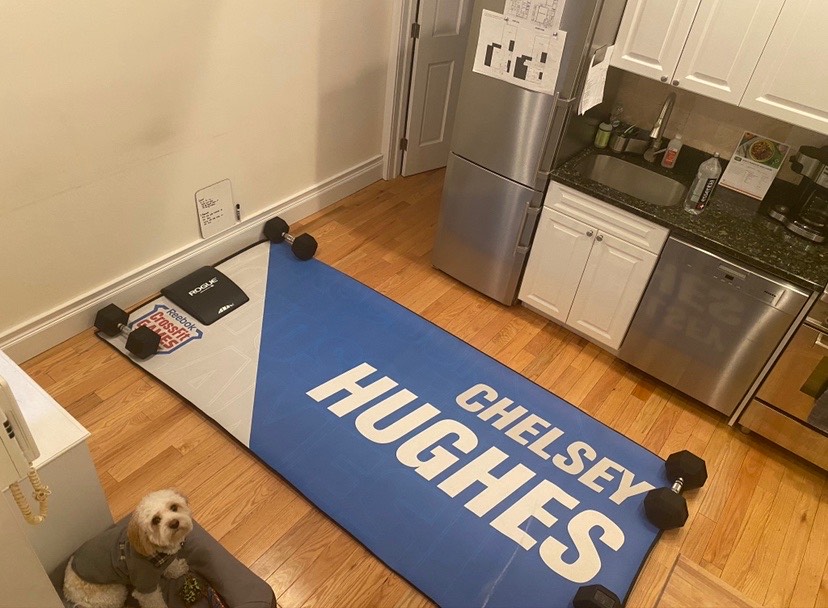 “It’s just enough room to do some very precise double-unders and burpees,” the 35-year-old said.

It wasn’t her first choice of training facility, but when the city was under strict lockdown in early 2020, it was better than nothing.

She wasn’t alone, of course. The COVID-19 pandemic shuttered gym doors across the world, forcing people to get sweaty in their living rooms, basements, and backyards. And while some athletes were lucky enough to quarantine with generously outfitted garage gyms — or keys to an affiliate — Hughes found herself in the same position as most everyday CrossFit athletes: stuck at home with nary a barbell in sight.

So she got creative.

She ordered two sets of dumbbells — 35 and 50 lb. — and a Rogue Jammer pull-up bar, which she mounted over the door next to her fridge. Box jump-overs? No problem; she just jumped over her trash can.

When she tired of burpees and dumbbell thrusters — and after discovering a pile of ceiling dust on the laundry-room floor below her unit — she walked to a nearby pier to do weighted step-ups on some boulders.

Not quite the cornucopia of movements that keeps CrossFit workouts constantly varied and therefore endlessly interesting and effective.

The key to staying motivated to work out at home, Hughes said, is perspective.

“I’m moving with a totally different purpose now,” she said of her quarantine workout mindset. “I’m moving for well-being; I’m moving to feel a certain way.”

That’s not to say lockdown training was less important than competition training. With the line between work and home becoming increasingly blurred, nowhere to go and no one to see, physical movement was more critical than ever.

A February 2021 survey by the American Psychological Association reported that a majority of adults in the U.S. have experienced “undesired weight changes” since the start of the pandemic, including an average weight gain of 29 lb. Ten percent of that majority gained more than 50 lb.

And that’s who Hughes was most worried about — everyone else.

“I can create workouts infinitely, but there were so many people that just sort of freaked out,” she said. “They were used to going into class or going into a gym and someone else telling them what to do, and then when that stopped for them, they were reaching out to people like me as a resource.”

So that’s what Hughes became. She posted her home workouts to social media to inspire and instruct, and she even wrote custom at-home training plans and recorded demo videos for people who reached out to her. 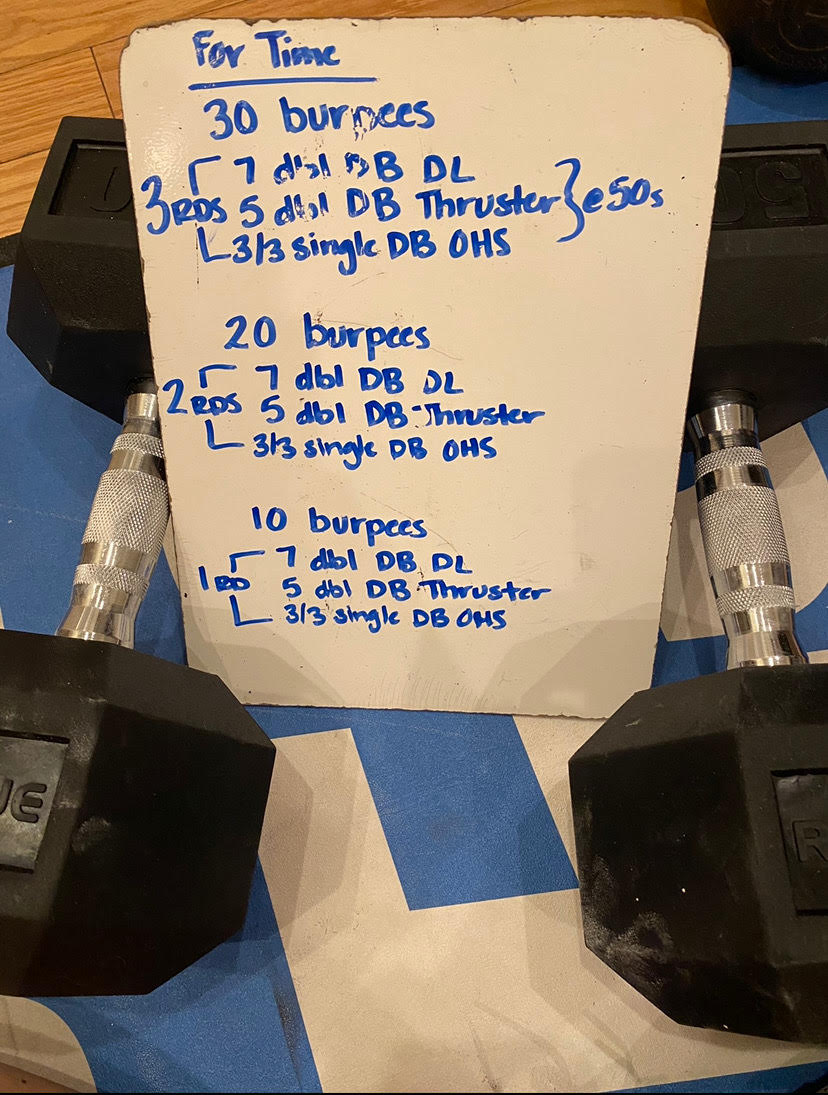 “The CrossFit community … my personal opinion is that we have an obligation to show the world how to be the healthiest,” she said. “We are an example of what well-rounded fitness and nutrition and whole health could look like.”

After training in her apartment for two months, Hughes traveled to her hometown of Abilene, Texas, to spend time with her terminally ill father. Although her workout prospects were better there — her mother allowed her to build a modest garage gym in exchange for some elbow grease to fix the place up — she still had to improvise, sealing homemade sandbags with duct tape, constructing her own plyo box, and tossing a Rogue rope over a backyard tree branch.

And when the Open rolled around and no CrossFit affiliates near her were open yet, Hughes did it in a globo gym.

“I was doing wall walks with this 80-year-old couple on the crank machine watching me,” she recalled, laughing.

Despite the locale, Hughes advanced to both the Individual Quarterfinals and the Age Group Online Qualifier. She earned a spot at the Games in the 35-39 division with an 18th-place finish in the latter; her 105th-place finish in the former sent her to the Semifinal stage of competition, where she finished in 23rd at the West Coast Classic in Las Vegas, Nevada.

But her rank this weekend isn’t what matters most to Hughes. While parts of the world have begun to reopen, the COVID-19 pandemic still rages on in others — and its effects on mental and physical health will be far reaching.

Which means Hughes’ real work has only just begun.

“I'm super excited to focus on the health of the nation and our population,” she said. “And now it's meaning more than ever.”