Quotes listed within this article were translated by Roman Khrennikov's translator, Roza Gilles.

2018 should have been Roman Khrennikov's big break. He had secured a first-place finish at the Europe Regional and had his first CrossFit Games invitation in hand. His hard work had paid off, and his dream of competing among the fittest in the world was within sight. He ramped up his training, preparing to debut on the big stage in Madison, Wisconsin, in just a few months.

But on July 19, 2018, just 13 days before the start of the 2018 Reebok CrossFit Games, a post appeared on Khrennikov's Instagram page: "Dear friends, I thank you for your strong support! … Unfortunately, I can not go to (the) CrossFit Games."

Khrennikov had applied to enter the United States on a tourist visa, as other international CrossFit athletes have done, but he was flagged as an emigration risk. The visa was denied — and it wouldn’t be the last time.

"(I) had been denied to get a visa—for the particular reason (that) the consulate assumed that (I) was going to immigrate to the United States, instead of just coming back, that there was nothing to hold (me) back in Russia," Khrennikov said.

After competing in the 2020 CrossFit Games virtually due to the COVID-19 pandemic, Khrennikov sought a new option for the 2021 season, the athlete visa. However, that visa was also denied.

Three CrossFit Games tickets snatched away; four years spent patiently waiting for the day he could compete in front of thousands of live fans at the ultimate proving grounds for the Fittest on Earth.

But everything changed when a couple from Madison, Wisconsin, heard of Khrennikov's story.

The two became familiar with Khrennikov's story through longtime friend and marketer for Concept2 Greg Hammond. The tale evoked a sense of familiarity and anguish within Roza.

In the process of moving to the United States at the age of 18 to pursue professional modeling, she too experienced the complicated visa process.

Unlike a tourist visa, an athlete visa takes a lot more time, paperwork, and money. The P-1A visa allows internationally recognized athletes to come to the United States to participate in athletic events and competitions. If Khrennikov were to be issued this visa, he would be allowed to stay in the United States for up to five years and bring his family with him.

Most professional athletes have lawyers and their teams helping them obtain these visas. With the government's lack of knowledge about CrossFit, Roza knew it would be difficult. But it was Khrennikov’s only chance. 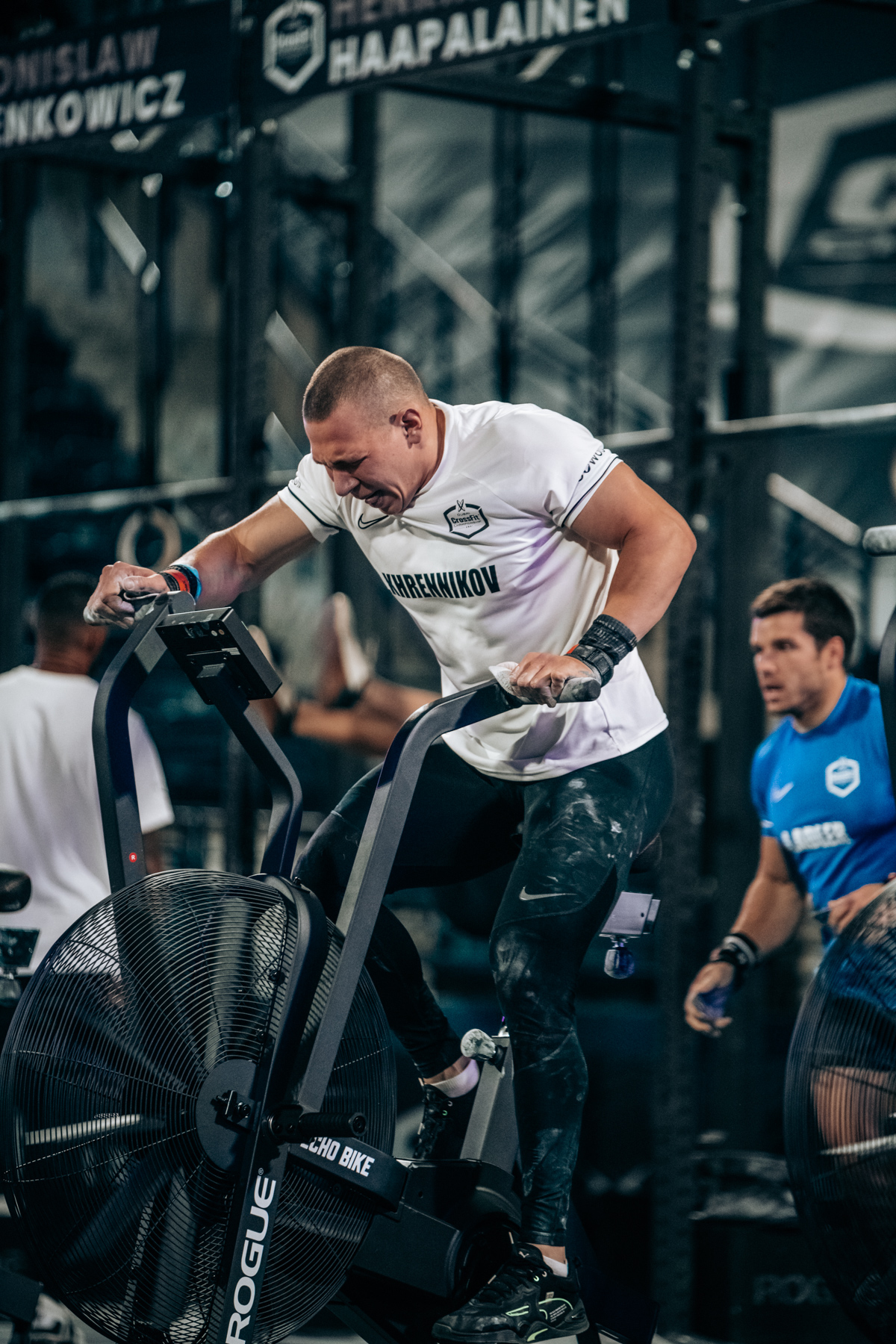 Roman Khrennikov at the 2021 Dubai CrossFit Championship | Photo by @1rmphotography

At the 2021 NOBULL CrossFit Games, Roza had translated for Alexandr Ilin, a three-time CrossFit Games athlete and friend of Khrennikov's who introduced the two on a FaceTime call. Without knowing the 26-year-old, Roza felt a strong obligation to do everything in her power to help.

Even though Khrennikov had tried to apply for an athlete visa in the past, he hadn’t had any guidance. So Roza called the immigration lawyer that had helped her with her work visa to counsel Khrennikov through the process. Roza put together all his paperwork, referencing the competitions he had competed at, the prizes he had won, pictures, and news articles to convince the immigration office that he was an internationally recognized athlete.

By the end of October 2021, the application was submitted. Knowing it would take up to six months for a response, they paid to expedite it so they would have an answer before Semifinals.

"It was a positive surprise that I got a visa I didn't expect," Khrennikov said. "(But) now I had to work really hard to prove to all the people who waited and cheered for me all these years."

Moving to the U.S.

The plan was to fly to Madison, Wisconsin, in July, just a few weeks before the start of the 2022 CrossFit Games. At the time, Khrennikov's wife, Anastasiya, was pregnant with their first child.

But in February 2022, as The New York Times headlines read "Putin's Forces Attack Ukraine," Khrennikov faced a difficult decision. He could move to the United States immediately, leaving his eight-months pregnant wife in Russia, or stay and risk the country shutting down and being recruited into the military.

"Roman has been a longtime ambassador for a Ukrainian CrossFit endemic tech company, and he has friends over there, so it is absolutely clear where his heart is at in this matter. He was one of the first Russians across all sports to speak his mind, which he did in a post on his social media the day after the invasion started. Doing posts like this is now, as I understand it, banned by law in his country, and it can carry a sentence of up to 15 years in prison," Khrennikov's manager Snorri Baron Jonsson said in March.

And the Sport of Fitness was how Khrennikov paid his bills. He had been waiting for the chance to compete live at the CrossFit Games for four years. This was his life's work.

He needed to pursue his dream.

On March 1, 2022, Khrennikov landed in the United States for the first time at the Chicago Midway International Airport. He agreed with Anastasiya that leaving her behind with his soon-to-be firstborn son was the best option. She would meet him in the United States once the child was born and they had secured visas alongside him.

"Roman missed the birth of his own son. I put my kid to sleep every night, and I kiss them goodnight. He never did," Roza said. "For me, it was the hardest thing I have seen another person go through. To work through that, that's the strongest part about him."

Arriving just one week into the Open, Khrennikov would spend the remainder of the 2022 season living at Pat and Roza's home with their two children and training at Pat's Gym to prepare for the Games. Khrennikov had to restructure his entire diet and training in a brand-new environment while proving he was still worthy to stand on the stage among the fittest in the world.

With his mind set on the job at hand, Khrennikov said his first reaction to the United States was that "everyone spoke English, and there were a lot of squirrels and foxes around."

For six months, Khrennikov lived with the Gilles family. Roza helped guide him through life in the United States, serving as a translator and mentor. Even though Pat doesn't speak Russian, he still worked alongside Khrennikov to support him through his training. CrossFit was their language.

Everyone at Pat's Gym supported Khrennikov through his journey to secure another invitation to the CrossFit Games, cheering him on through the Open and Quarterfinal workouts.

"Everyone (at the gym) grew this fondness of Roman because he ... is a very funny, playful guy that anyone is infatuated with," Pat said.

Khrennikov finished 138th worldwide in the 2022 Open and first in Asia at the Individual Quarterfinal. Qualifying for the Far East Throwdown Semifinal, Khrennikov traveled to Busan, Republic of Korea, in June 2022, taking yet another first-place finish.

This time, his place at the CrossFit Games was guaranteed. 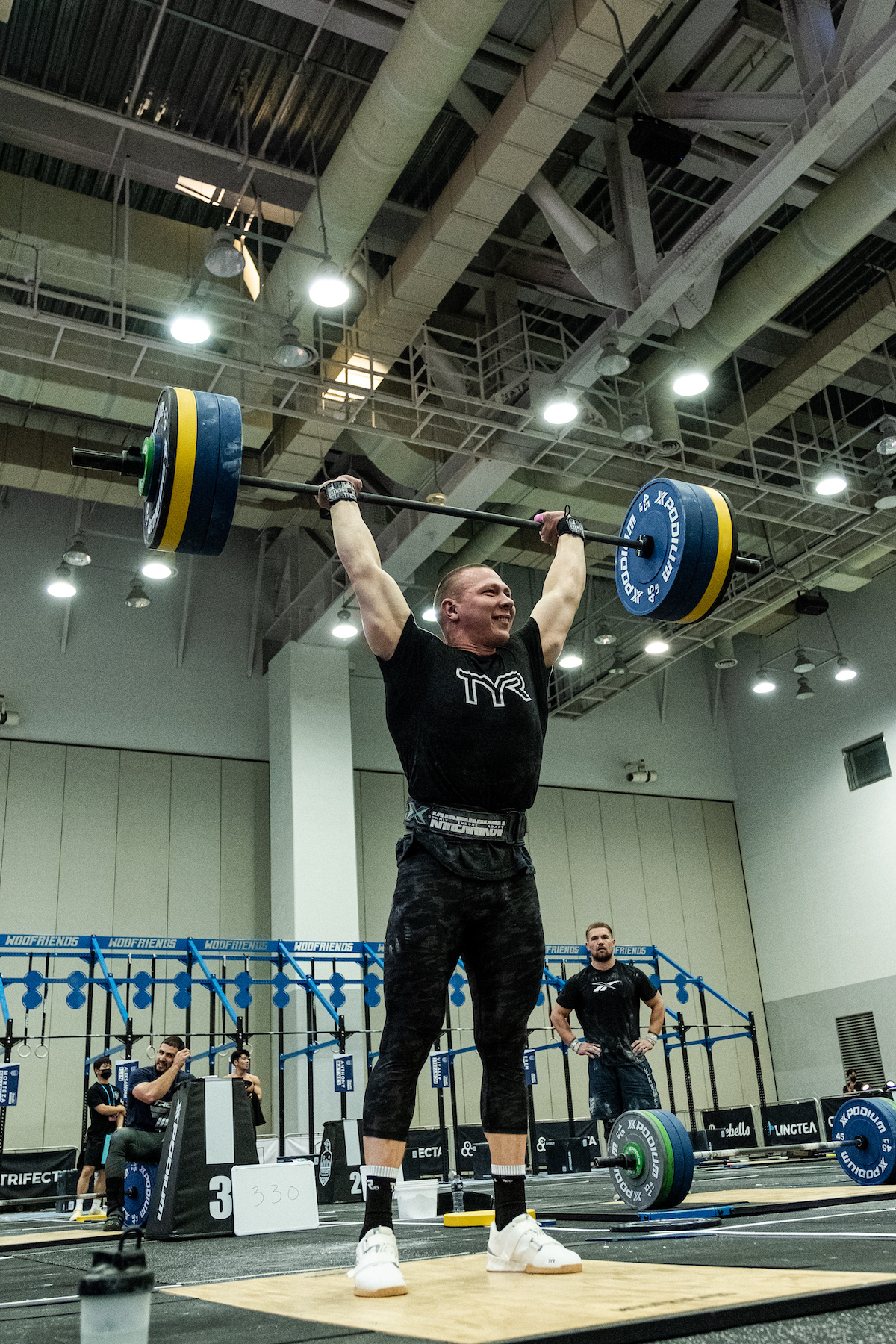 On July 29, just five days before the start of the Games, Khrennikov swiftly walked through the crowded terminal at the Chicago International Airport, spotting Anastasiya with a baby stroller by her side. A smile spread across his face. Embracing each other in tears, he looked down upon the small face of his newborn son for the first time.

Emotions were high leading into his debut at the 2022 NOBULL CrossFit Games, but as Khrennikov secured his bike helmet and lined up for the first event, he knew this was where he belonged.

After five days of grueling competition and 13 events, Khrennikov earned two event wins and 10 top-10 finishes. In the final event of the weekend, Jackie Pro, he battled to the end against Lazar Đukić, who claimed the event win, and beat Justin Medeiros, who was shortly after crowned Fittest Man on Earth.

At the conclusion of his first live CrossFit Games competition, Khrennikov stood in second on the podium with his newborn son in his arms, stealing the hearts of thousands of fans cheering from the stands. 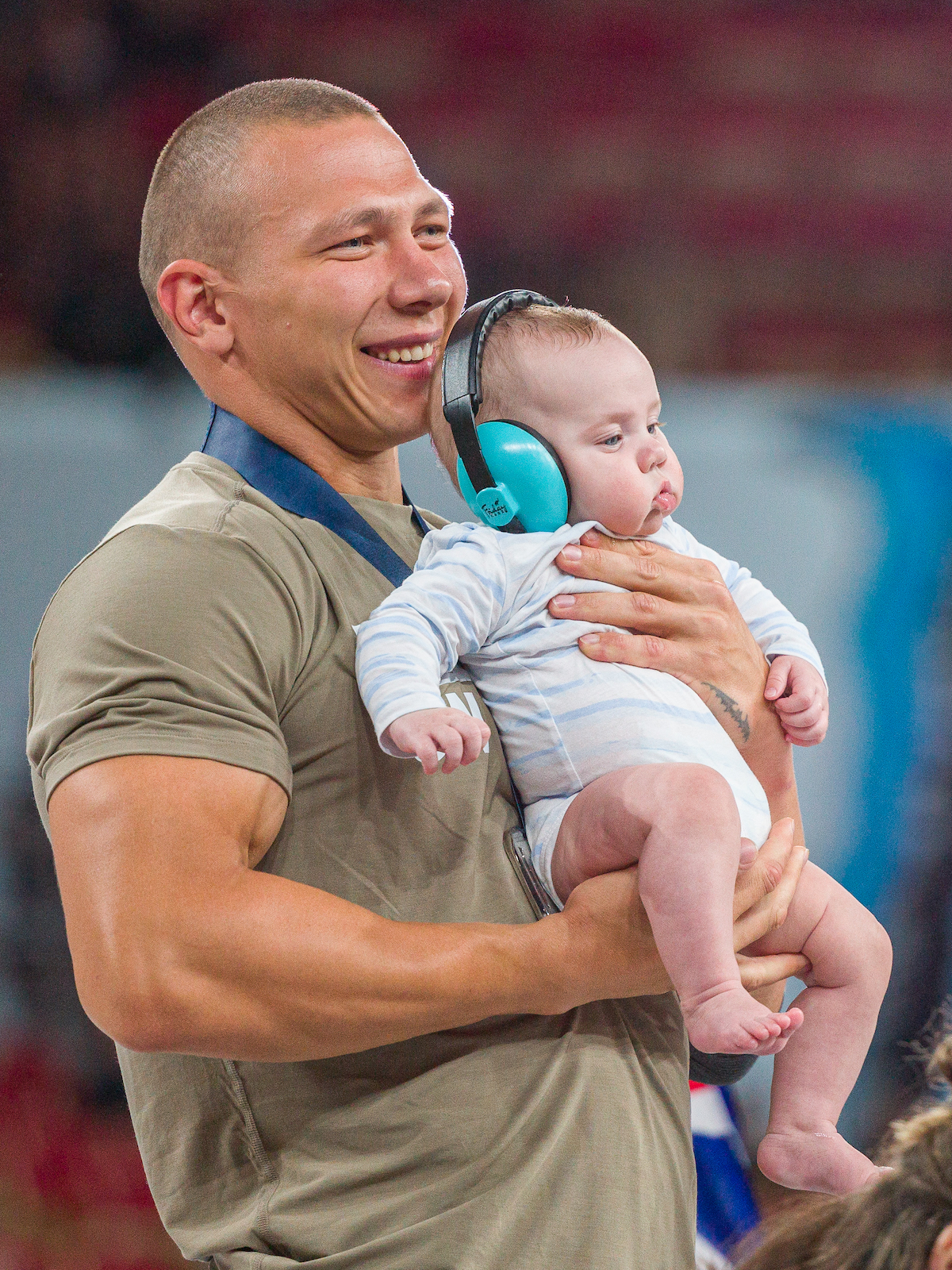 Looking to the Future

For the next five years, Khrennikov plans to stay in the United States to show his dominance in the Sport of Fitness.

Now that he is here for the foreseeable future, Khrennikov has been able to compete in CrossFit-licensed events in the offseason, taking fifth place at the 2022 Rogue Invitational, and he has announced he will appear at the 2023 Wodapalooza competition.

Roman Khrennikov at the 2022 Rogue Invitational | Photo by flsportsguy photography

Khrennikov's mission has been to prove that international athletes can stand atop the podium at the CrossFit Games. An international man has not accomplished the feat in 13 years.

"I want to be the guy who breaks the pattern of just Americans standing in first place (at the CrossFit Games)," Khrennikov said. "I feel like the fans are waiting for that from me, and I will do anything in my power to deliver that."