It all started with an injury on the netball court.

Months later, College netball athlete Letchen du Plessis was going through the motions of her morning routine. Recovering from multiple surgeries for a hip dislocation, du Plessis carefully bent down to pull her socks over her feet, a task she usually could do without difficulty. She hadn’t yet phoned her parents for help with her recovery.

But something wasn’t quite right. Not only could she not perform the simple task of slipping a sock over her left foot; she had no function at all in the leg. Chalking it up to a lack of exercise, du Plessis tried to wiggle her toes‚ but the movement would only follow seconds later. She still didn’t quite understand the magnitude of the situation as she filmed a video of the delay to send to her doctor.

“Look at this!” she said in the video.

Her doctor told her to come to the office immediately.

Something was very wrong.

A Star on the Field

In 2012, when du Plessis was a teenager, she joined RTF CrossFit Repeat, a CrossFit gym within Menlopark High School. There, she focused on conditioning and injury prevention for netball and water polo, the two sports she fell in love with growing up.

“CrossFit is what made my dives so good, made my legs strong for water polo … . It was complementary to every single sport that I've been doing,” she said.

In preparation for college in 2017, du Plessis had a tough choice to make: play netball or water polo. Ultimately she chose to focus on netball with a dream of one day moving to the U.K. to join a professional club.

Du Plessis received a scholarship to play the sport at the North-West University Potchefstroom in South Africa and paused her CrossFit training to follow the netball curriculum.

Each night, du Plessis would jog the mile from her hostel to practice, but in May 2017 she was running late. She jumped in her car and zoomed to the field, where she spent several hours drilling passing and shooting with her teammates.

With five minutes of practice and one last drill left, du Plessis was getting excited to return home and settle down for the night. But as she was running, a teammate passed the ball behind her, forcing her to plant her left foot — according to the rules of the game — which also pulled her left hip out of its socket.

“Luckily, the muscles were strong enough to pull the hip back into the socket, but I don't know if it's lucky or unlucky, because that caused a lot more damage,” du Plessis said.

Three weeks later, Du Plessis headed to her local doctor and physio, where she underwent surgery to repair a torn labrum and several hip flexors in her left hip. During the procedure, doctors discovered the total extent of the damage on her hip joint: The bone was dying due to a lack of blood supply.

“You can’t play netball anymore,” the doctor said to du Plessis after she woke up.

For du Plessis, it was an unthinkable sentence.

“When you find yourself identifying as an athlete, and someone takes that away from you, you're left without an identity. I think as a 19-year-old, that was a very big shock to the system,” she said.

After the initial surgery, du Plessis was forced to make a tough choice at a young age: Get a hip replacement or have an experimental surgery that involved removing the dead bone to stimulate new blood flow and bone growth with the help of a metal rod.

Hip replacements only last so long, so du Plessis decided to risk the experimental surgery. Though she was bed-bound for months, the procedure was considered a success.

But when she couldn’t put on her socks six weeks and three total surgeries later, she knew something was very wrong.

CRPS is a nerve disease caused when nerves experience trauma, which triggers the brain into thinking it needs to fix something that isn’t broken. In du Plessis’ case, the trauma of her hip dislocation and surgeries — despite their success — flipped a switch that told her brain to fight her leg. The result was a loss of function, swelling, changes in skin texture and color, and even a loss of hair growth. It is a progressive disorder, meaning it only gets worse over time.

“My body couldn't understand the sensation of running water and would freak out,” du Plessis said. “My leg would (turn) bright red and would swell up.”

About 25% of CRPS patients also get dystonia, a movement disorder characterized by irregular motion, spasms, and repetitions. Although doctors don’t know the exact cause of du Plessis’ diagnosis, it is thought to have been provoked by the trauma of the hip dislocation.

To combat her symptoms, du Plessis was prescribed an expansive medication regimen, resulting in side effects that caused even more pain. Instead of suffering from the side effects, she decided to try to relearn how to walk and teach her brain to recognize her leg without the help of medication. Each day, she would run her leg under cold water to help train her brain to recognize that the sensation of water was not dangerous.

In January 2019, a spinal-cord stimulator was inserted on top of her spinal cord to streamline signals to her brain and nerves. The stimulator is connected to a wireless device that can be programmed to control her left leg. When the stimulator is turned off, within 10 minutes, her leg loses blood flow and turns purple, as if her brain had cut off the limb. But as soon as the device is turned back on, her brain recognizes the leg again.

“I kind of call myself a semi-bionic human,” du Plessis said.

Going from a star college athlete to completely sedentary took a toll on du Plessis. She needed to be active again and remembered her years in CrossFit.

Just six weeks after the stimulator was inserted, du Plessis joined CrossFit PBM, using it as a type of rehabilitation that would allow her to stay active. She scaled each movement to make sense for her body and what she needed to achieve in her daily life, such as burpees to help her get up off the ground and deadlifts to help her learn how to pick up items.

“The mind and the balance aspect of keeping something over your head or doing anything like that has made such a big difference,” she said.

Du Plessis’ doctors didn’t believe one rehabilitation process works for everyone, so they were on board with CrossFit as a tool for du Plessis’ recovery. At her next checkup, they said, “Whatever you’re doing is working.”

In 2019, du Plessis began watching the CrossFit Games on TV, forcing her parents to stay up at all hours of the night to share in her excitement over the top athletes in the sport. But she never expected to one day compete on the very same field she was watching in awe.

Du Plessis said she admired “what those athletes do and the hours they put in to get to that level.”

The introduction of the adaptive divisions in the 2021 CrossFit Games season unexpectedly reignited du Plessis’ competitive fire. She immediately signed up for the Open in the Women’s Neuromuscular division, and after finishing top three in every workout, she took first place worldwide. Du Plessis had earned her ticket to the CrossFit Games.

Upon arriving in Madison, Wisconsin, du Plessis learned a lot about herself as an athlete, discovering new areas that needed work and new areas where she could push herself. Although the judges adapted each movement to each athlete’s abilities, they had to make sure no adaptations provided any unfair advantages. In Event 1, a 3-mile run, du Plessis was told she couldn’t use her crutches and therefore had to wear her brace instead, which only slightly helped propel her left leg. Primarily using the force of her right leg in a skipping motion, du Plessis skipped the full three miles, finishing in last place and adding “run without crutches” to her list of challenges to work on. 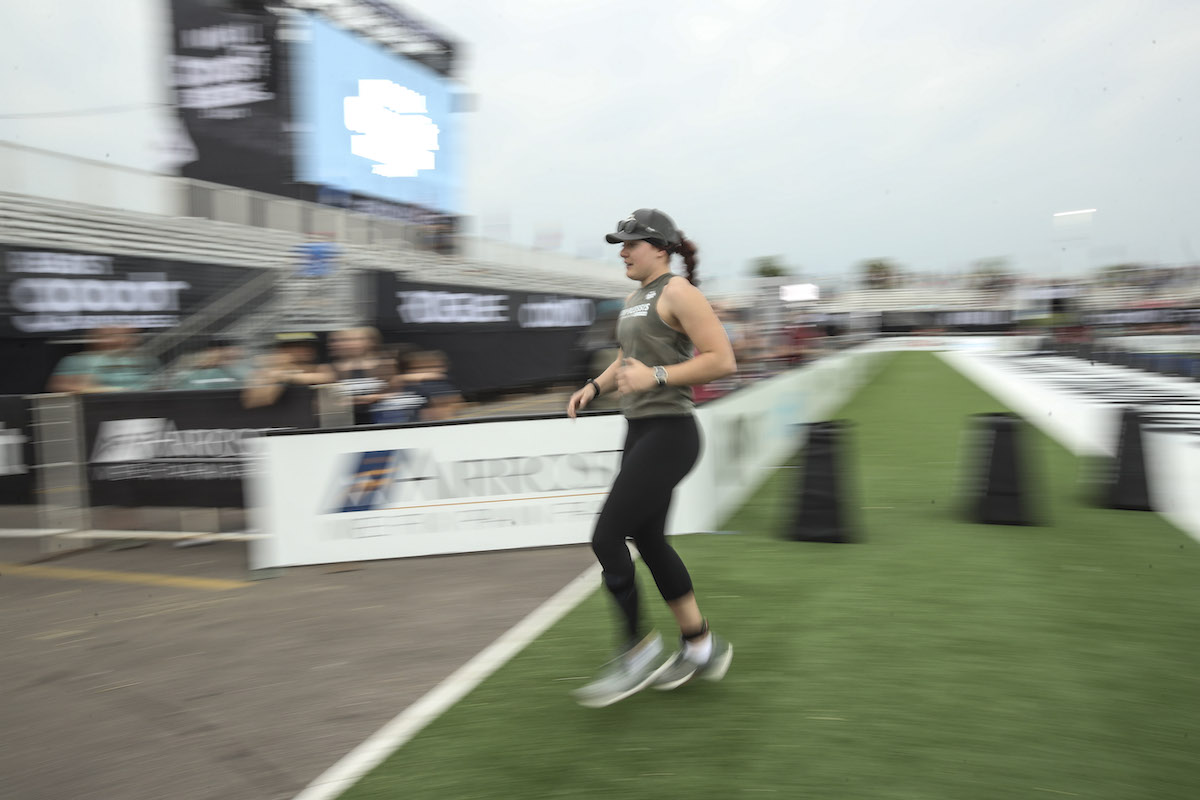 Throughout the remainder of the week, du Plessis learned many different adaptations she had never considered before. For toes-to-bars, she could decrease the range of motion, and squats required her to lean more on her right leg as though she were performing a pistol. She even learned she could perform double-unders and rope climbs as prescribed — two movements she hadn’t even considered trying.

“The adaptive divisions gave you a sense that there are other people doing CrossFit out there, not just these elite athletes,” du Plessis said. “The nice thing about the adaptive category is it shows that CrossFit is infinitely scalable for any athlete.”

At the closing ceremonies, du Plessis stood proudly on the podium in second place for her division. And despite being told she would never be an athlete again, she can now call herself a CrossFit Games athlete.

“You cannot control what happens to you, but you can control how you respond. … And that for me is the ultimate gift.”— Letchen du Plessis