The 2018 Reebok CrossFit Games are underway in Madison, Wisconsin.

InstaGames articles are updated throughout the day with snapshots and highlights from the live events. For instant analysis from the competition floor, post-event athlete commentary, and spectacular photos and videos, follow CrossFit and the CrossFit Games on Instagram.

These aren’t 30 muscle-ups in your gym.

It’s 30 muscle-ups at the CrossFit Games. The equipment is different, the elements are in play, and judges are watching like hawks.

You can find Zeke Grove doing 30 unbroken muscle-ups on video, but he went 26 and 4 in Madison.

“Different conditions,” he said. “The wind’s howling. The rings are really long in the straps. Changes things.”

Katrin Davidsottir, 15th on the women’s side, noted that wind-wandering rings cost her extra time between sets.

“It takes you a little longer to jump back up,” the two-time champ said.

Sara Sigmundsdottir missed a deadlift, composed herself, fed off the crowd and made the lift after a long, difficult pull. 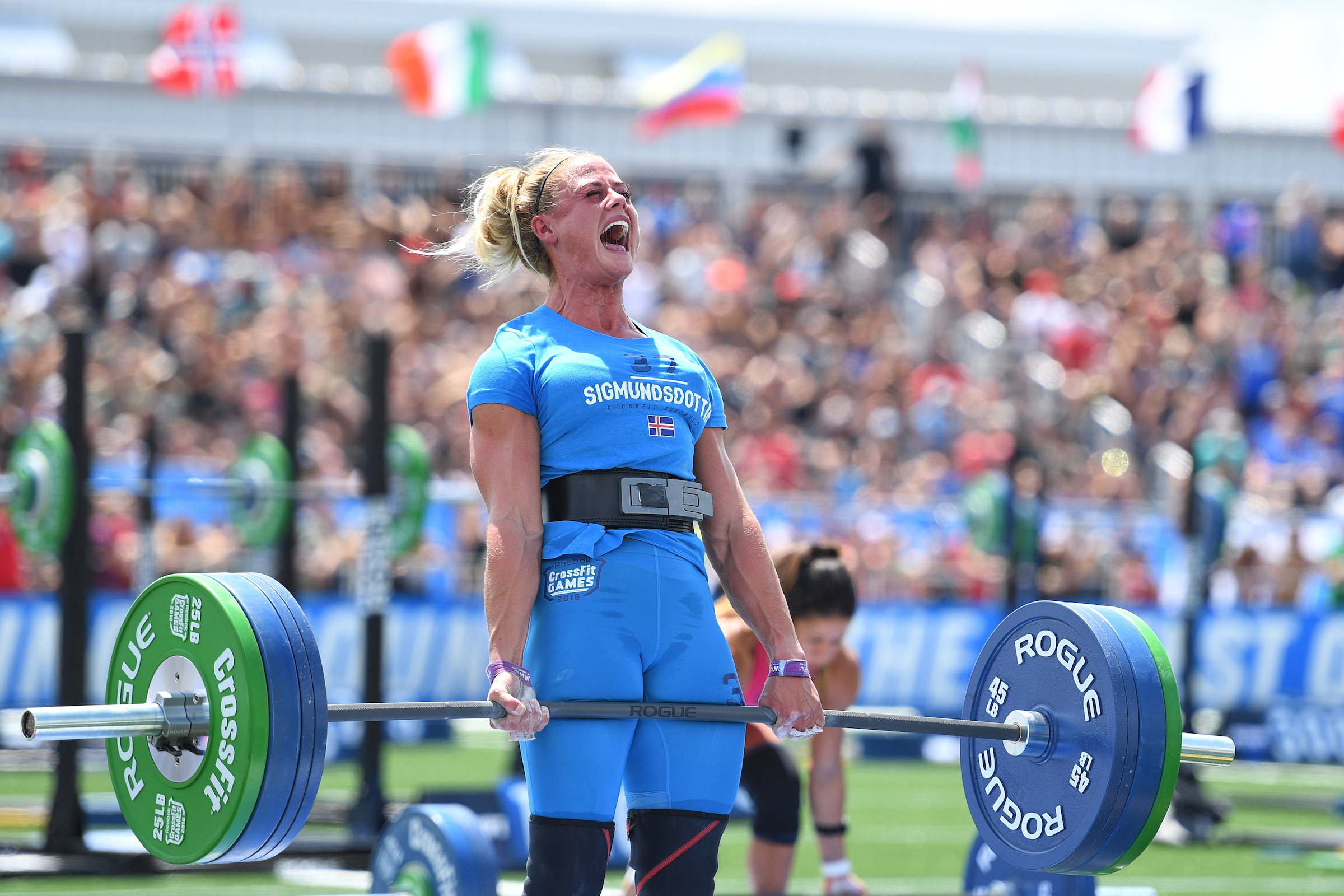 The CrossFit Total is about gambling at the right time, Kara Saunders said after the event. She was eighth, with a total of 840 lb.

“I took a little bit more of a risk on the back squat because I felt like I could. ... Sometimes you just got to take a risk.”

“You always wish that you could do more, but you can only do what you can do.”

“I like hopping over stuff, and I thought the cargo net was a blast. And the monkey bars weren’t bad, either.”

That’s not a kid talking.

Masters athletes continue to redefine aging, and you can read more about that in an upcoming CrossFit Journal article by Lon Kilgore.

Short summary: Our perception of aging is likely flawed because so few people train to be fit later in life. Studies involving sedentary people paint a bleak picture, and we see “old people” as slow and broken down.

But if more people trained to improve their fitness as they age, we’d probably need more monkey bars in the playground.

Jamie Greene has a series of labeled bottles in the basket beside her rower.

Sara Sigmundsdottir and Alessandra Pichelli are wearing water-filled backpacks. Pichelli has a squeeze pack of food tucked in her belt. 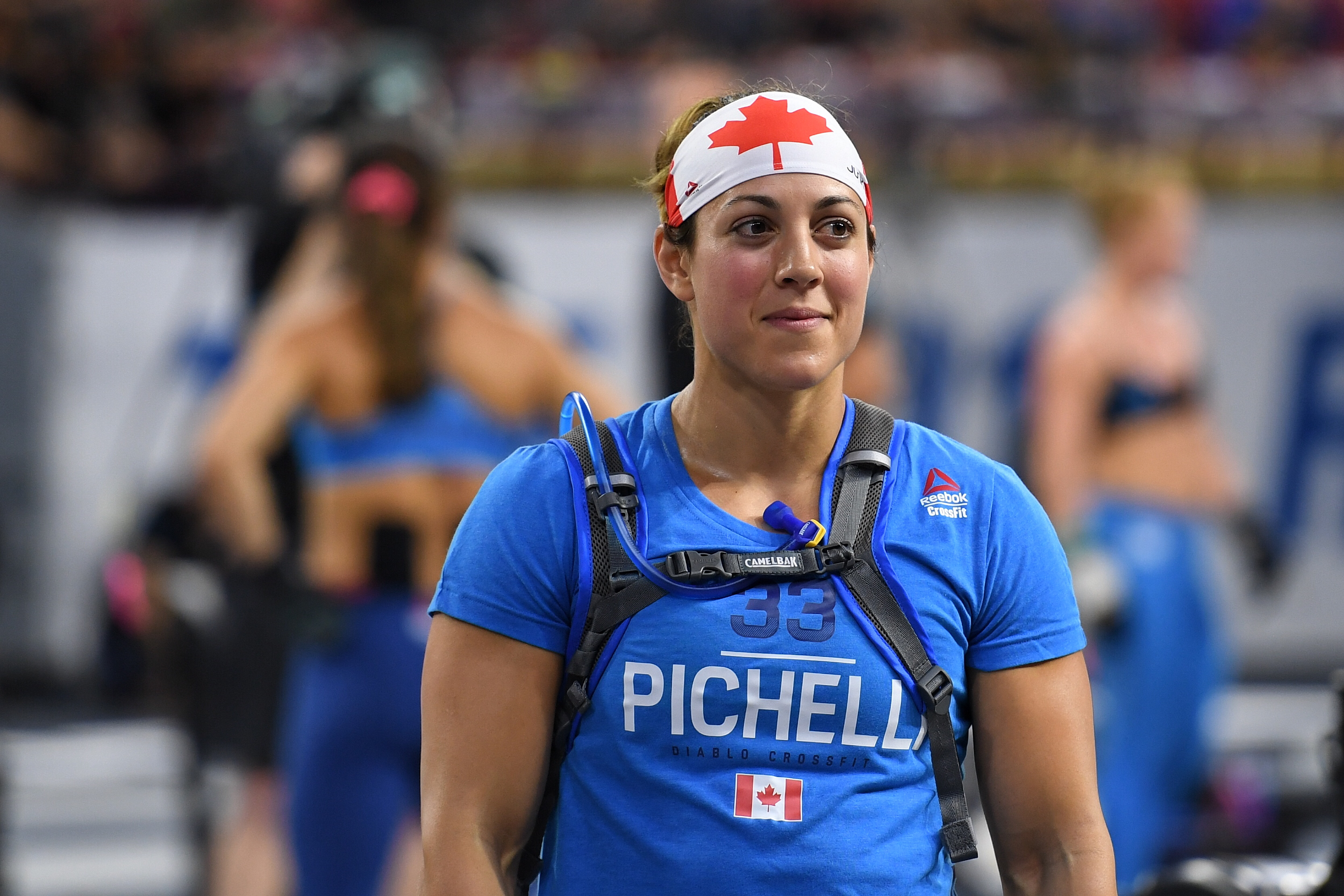 Laura Horvath has a bag of grapes beside her.

Cassidy Lance-McWherter has a cooler filled with who-knows-what.

It’s like that when you’re going to row for about three hours.

After athletes touched the handles too soon, the event was stopped, and staff are now resetting for Round 2.

“Katrin, where are your hands? Put them on your knees!”

After Games Director Dave Castro barked at Katrin Davidsdottir and her busy hands, he led the athletes through a very specific procedure to prevent a second bad start. And then the Individuals started on a row twice the distance of the one done in California at the 2013 Games: 42,195 meters.

Early on, Whitney Gelin and Margaux Alvarez were pulling below 2:00 per 500 meters, but they quickly dropped off that pace, and Alvarez passed Gelin for top spot. The pair were about 125 meters ahead of the rest of the field 15 minutes in.

On the men’s side, 215-lb. Rasmus Andersen was out in front 9 minutes in, pulling about a 1:57 and holding steady.

Sean Sweeney, he of the cowboy hat, actually told a joke—a really bad one—through the announcer. 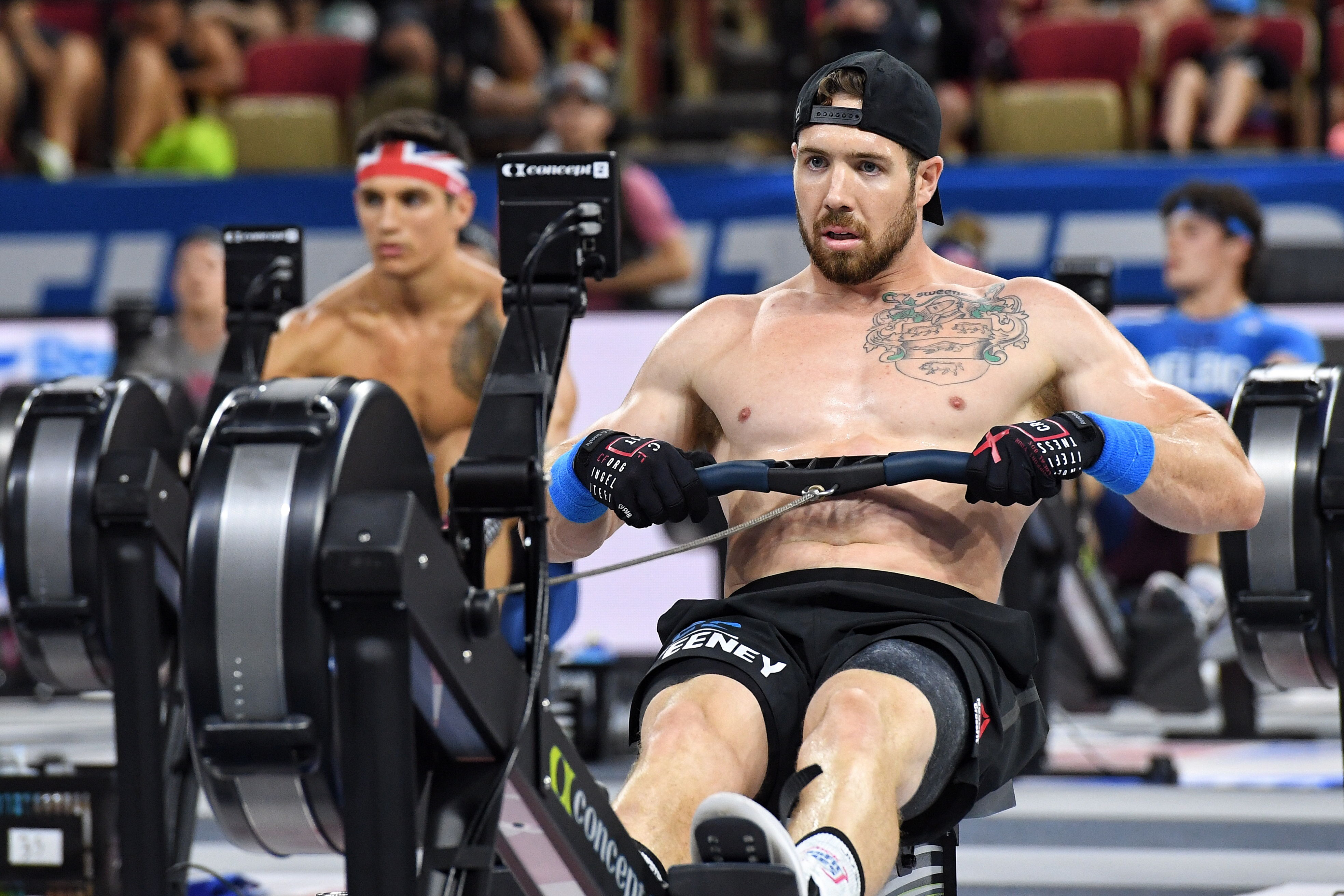 It wasn’t worth repeating, but Sweeney has another two hours to think of something better.

With less than 8,000 meters remaining for the top men, people were shifting uncomfortably in their seats and doing anything they could to ease their discomfort. Many sat on towels, with empty water bottles strewn around the rowers.

Early leader Rasmus Andersen had fallen off the pace and was losing ground, with Lukas Esslinger atop the leaderboard and holding a pace that wavered between 1:55 and 1:57.

Over on the other side of the floor, Margaux Alvarez was pulling ahead. Her split halfway through the marathon was actually faster than when she did the half-marathon row in 2013.

Alvarez looks like a lock for first, with Whitney Gelin and Annie Thorisdottir comfortably uncomfortable in second and third. Esslinger and Lukas Högberg look to be good for the top two spots—but after that, it will be a fight.

The sprint to the finish is coming.

Marathon Row winner Lukas Esslinger said that after hobbling into the warmup area with an event win.

During the late stages, the boys were cutting deals. Esslinger and Lukas Högberg were out of reach, so the three-four-five spots were up for grabs among Cole Sager, Brent Fikowski and Patrick Vellner. 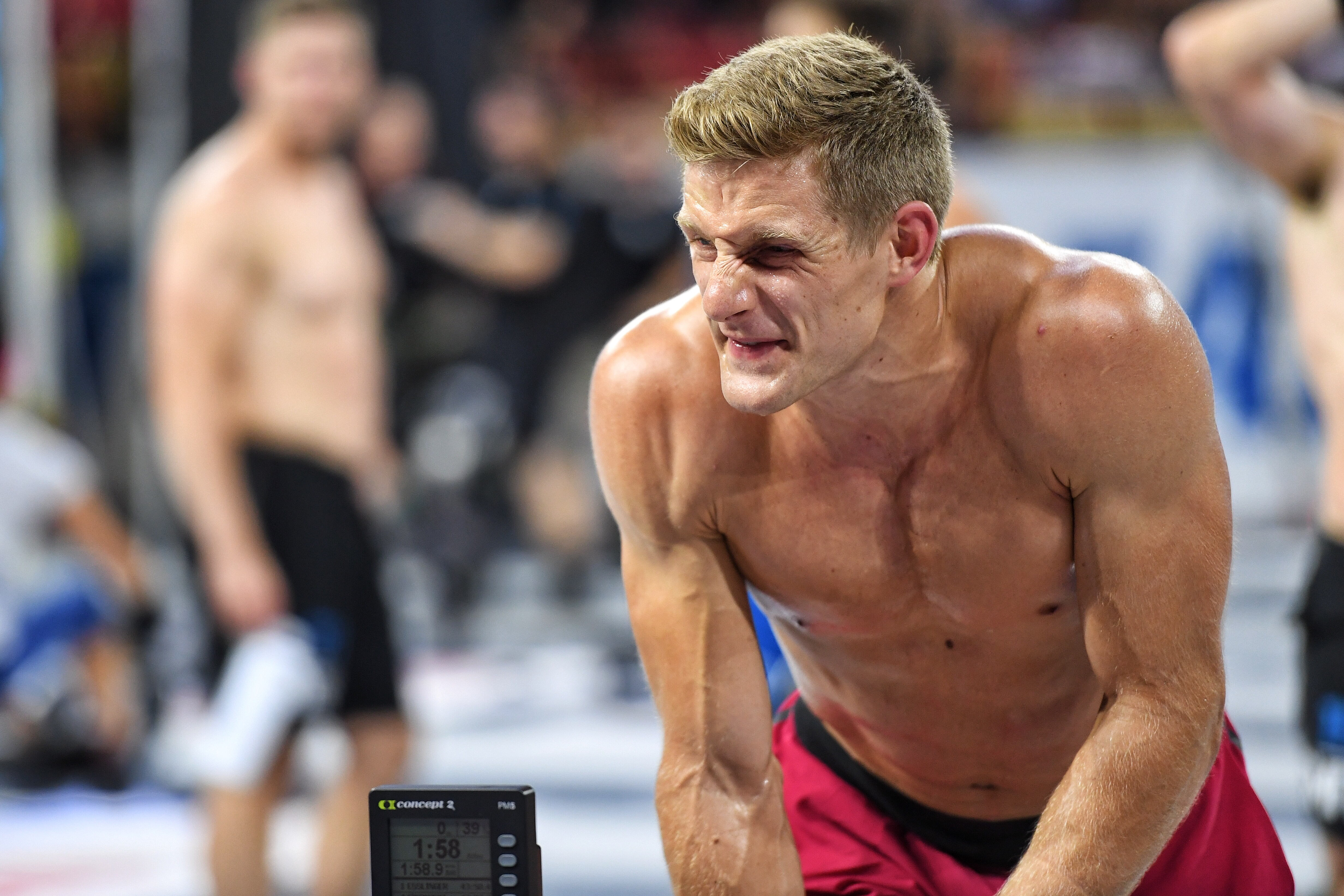 Their monitors displayed more info than the screens the crowd could see, so Fikowski started chatting with Vellner, right beside him, about positions.

“Are you going to gun for me?” Vellner said Fikwoski asked. 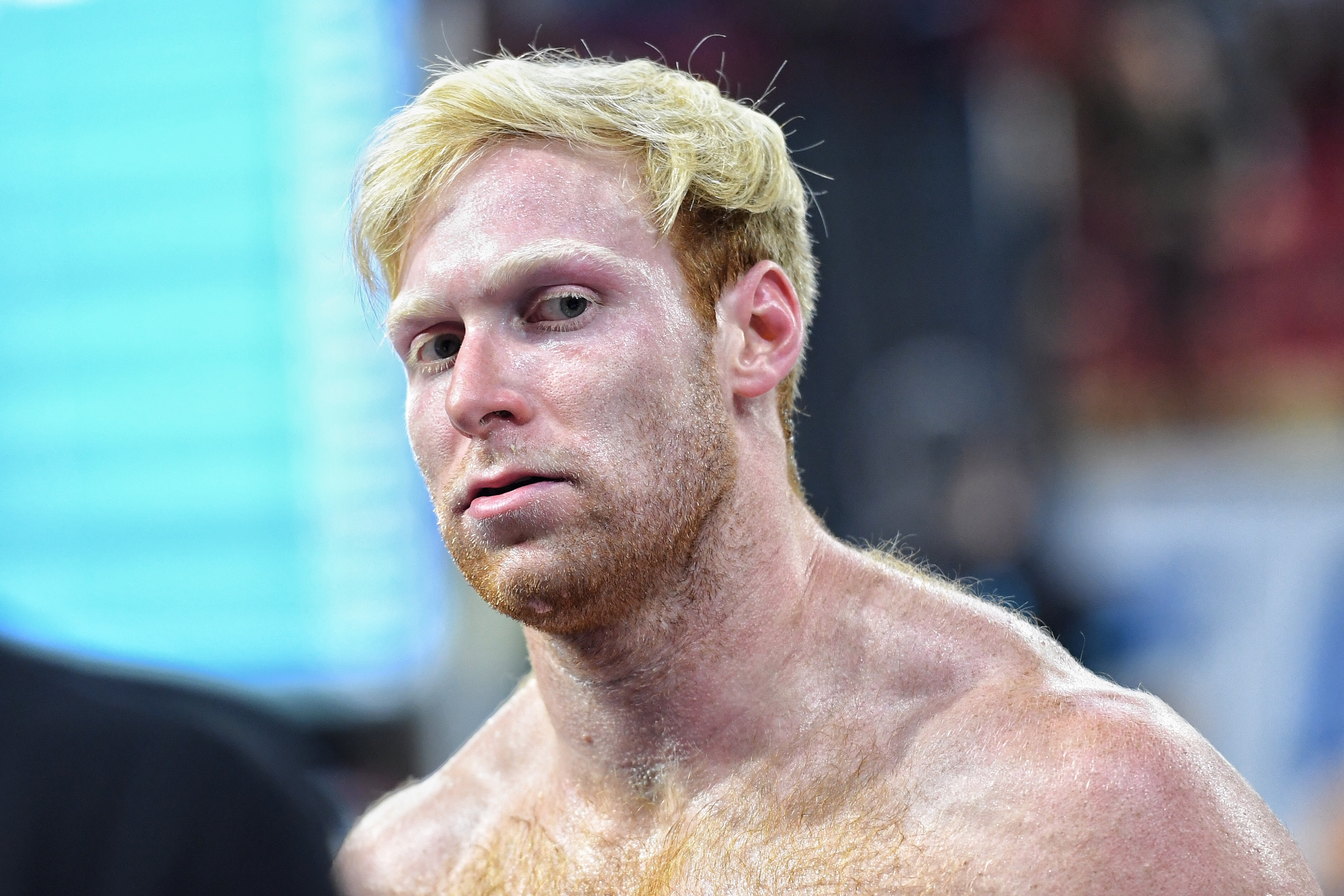 Fikowski shouted over at Sager, a few spots away, to confirm the plan.

In the back of Vellner’s mind was Roy Gamboa, who was out of yelling distance and couldn’t get in on the plan.

Vellner informed Fikowski that he might have to hold off a charge.

Director of the CrossFit Games Dave Castro said this would be the toughest day in Games history, with four challenging events. Ben Smith, a 10-time Games athlete, had to tip his cap to Castro.

Visit the Leaderboard for a complete list of the overall standings for TEAMS, MASTERS and TEENAGERS.