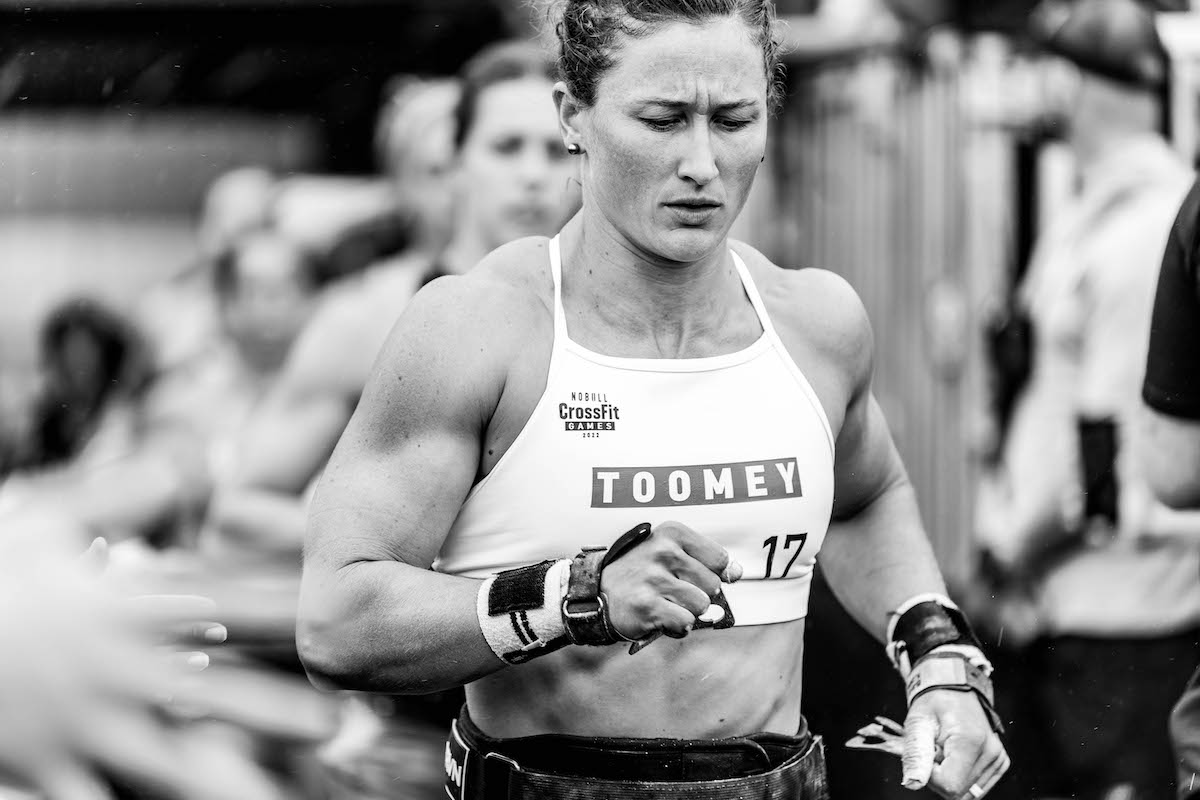 The barbells are perfectly aligned. The rowers set to zero. Everyone is in place.

Then go — the lightning strikes. Thunder roars from the crowd.

The athletes weather the storm, rep by rep. But they also create it. They row. They thrust. They muscle their way above the bar. They toss the barbells, leaving them in disarray. They scatter their weight belts across the lanes. Chalk sifts through the air and settles on the floor.

One by one, the athletes cross the finish line. The storm starts to clear.

At the end of it all, one man, one woman, and one team are on top. The Fittest on Earth have weathered the ultimate test — and survived. 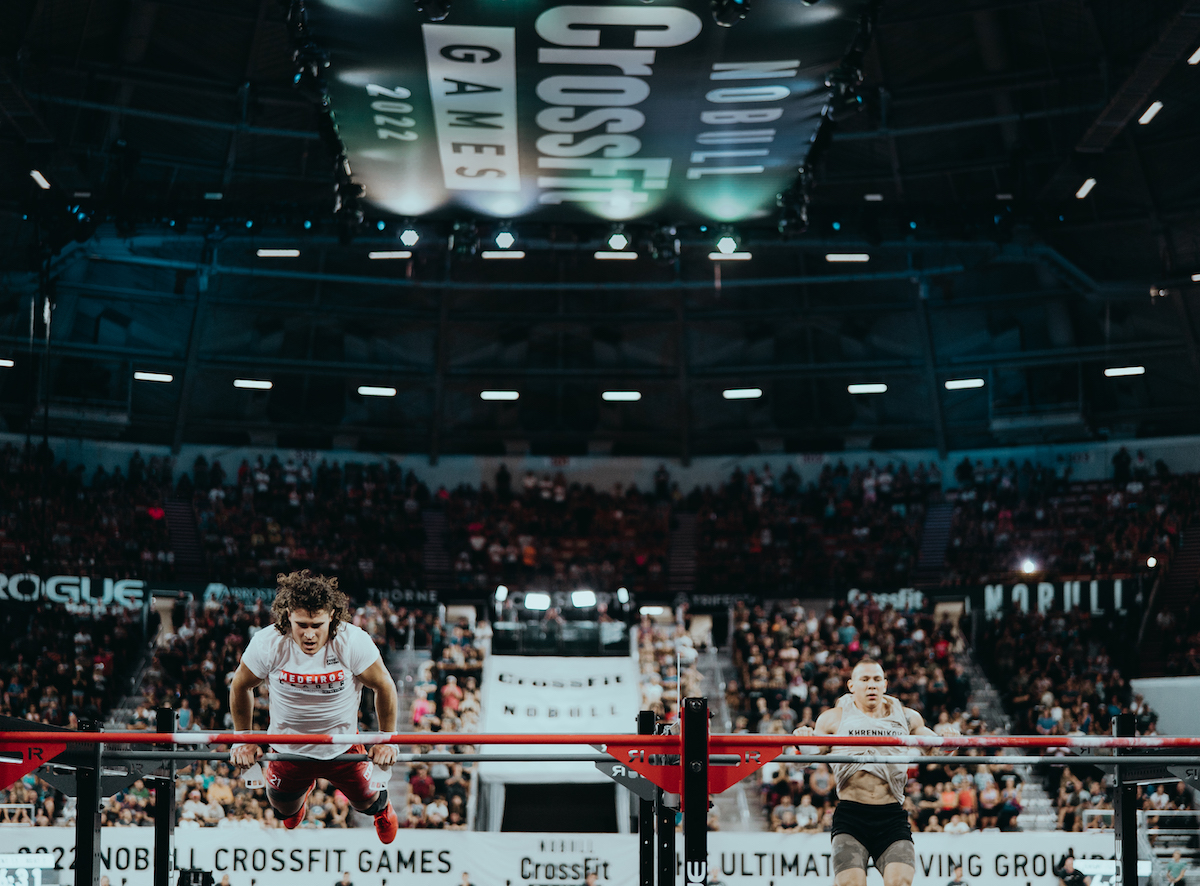 It was a fight for first.

The day starts with another event win for Roman Khrennikov. He creeps one step closer to Medeiros.

The two sit side-by-side at the end zone, the points too close for any quick calculation.

The title is in the hands of the leaderboard, and all there is to do is wait.

Khrennikov’s eyes bounce between the judges and the crowd, his body unable to still. Medeiros begins to pace and trots over to the crowd to distract the noise in his head.

Adrian Bozman returns to the floor to cease the suffering.

Medeiros has defended his title by 27 points. 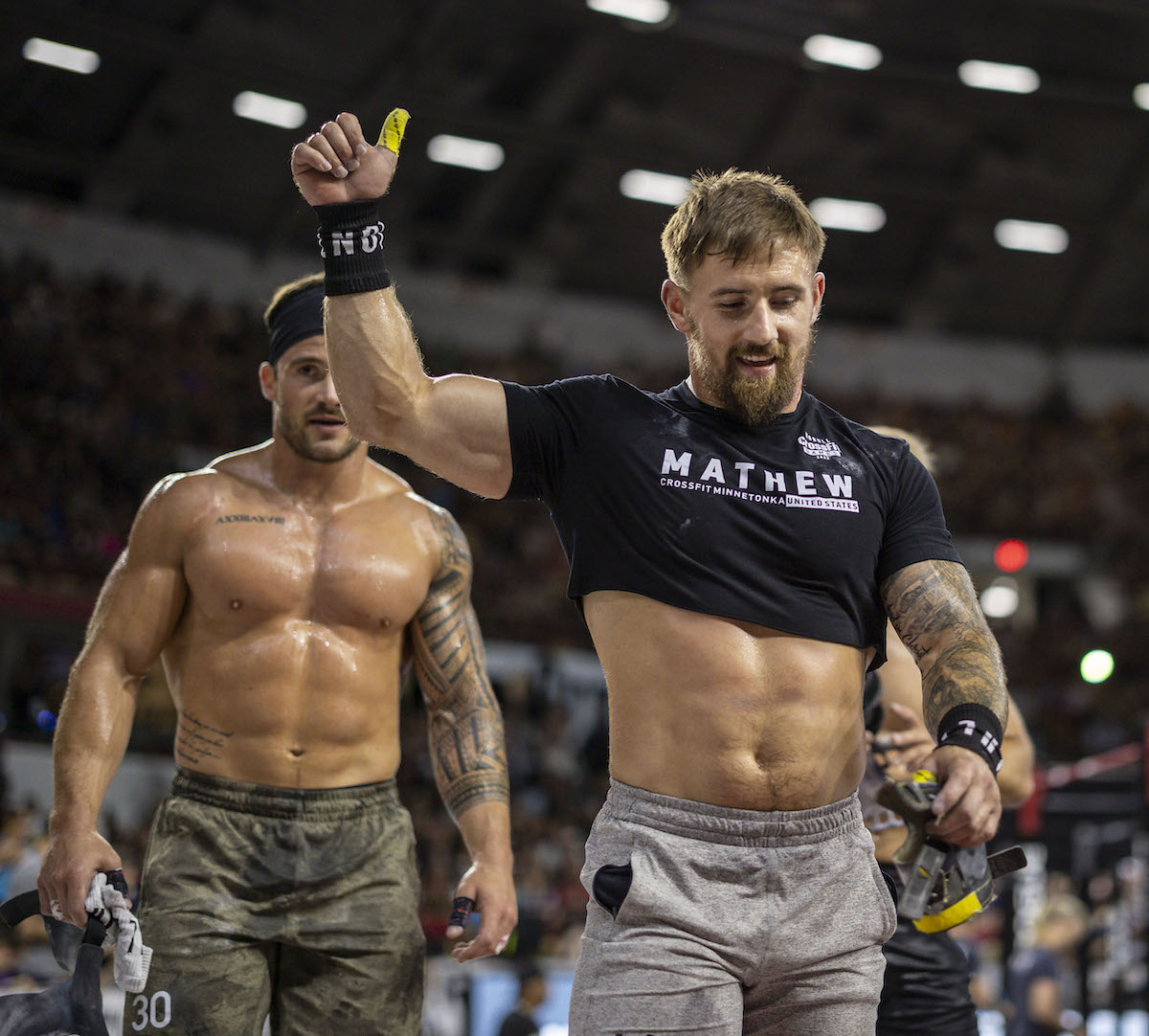 The United States Patent and Trademark Office may have a new submission awaiting its approval Monday morning.

The Coliseum crowd first took notice of Games rookie Nick Mathew and his crop-top style when he surprised everyone and won Skill Speed Medley on opening night, seemingly mastering the 25 double-under crossovers while his fellow four finalists struggled.

With his infectious personality and crop top now known to the masses, he dazzled the Coliseum crowd again on Saturday night going bag-for-bag with Gui Malheiros en route to the unlikeliest tie possibly in Games history in Sandbag Ladder.

Mathew finished 14th overall, sandwiched between Cole Sager and Jonne Koski, but he left a lasting impression on all those who watched him compete this week.

“I exceeded all my expectations for what I wanted out of this weekend. I’m pretty stoked,” he said following the finale. “It’s just about having fun. Love yourself. Love your body. Have fun. Be a kid again.” 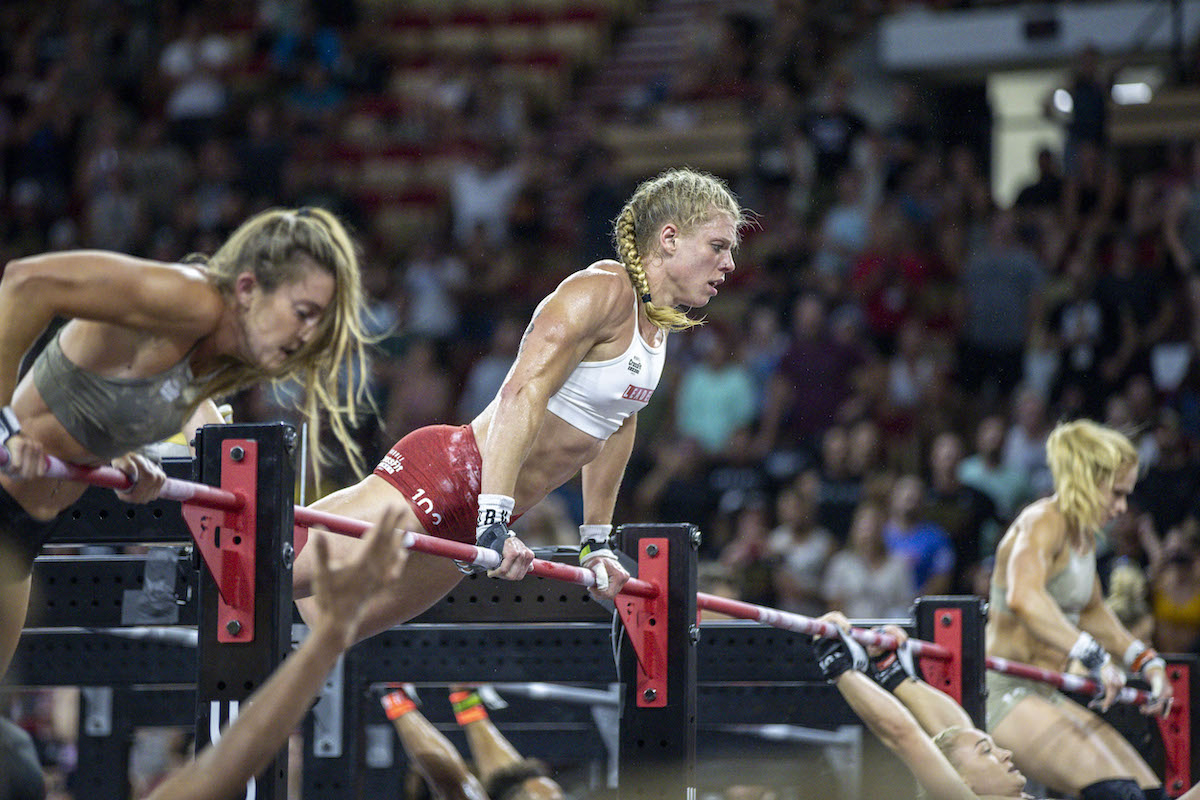 The Affiliate Cup finale was a reflection of the week in passing: A battle between CrossFit Mayhem Freedom and CrossFit Oslo Navy Blue.

Oslo Navy Blue started the week with the leader’s jersey, leaving CrossFit Mayhem Freedom out of its element and allowing Oslo to feel the freedom of being in first. But we saw history repeat itself in the finale.

The Youngest to Ever Podium 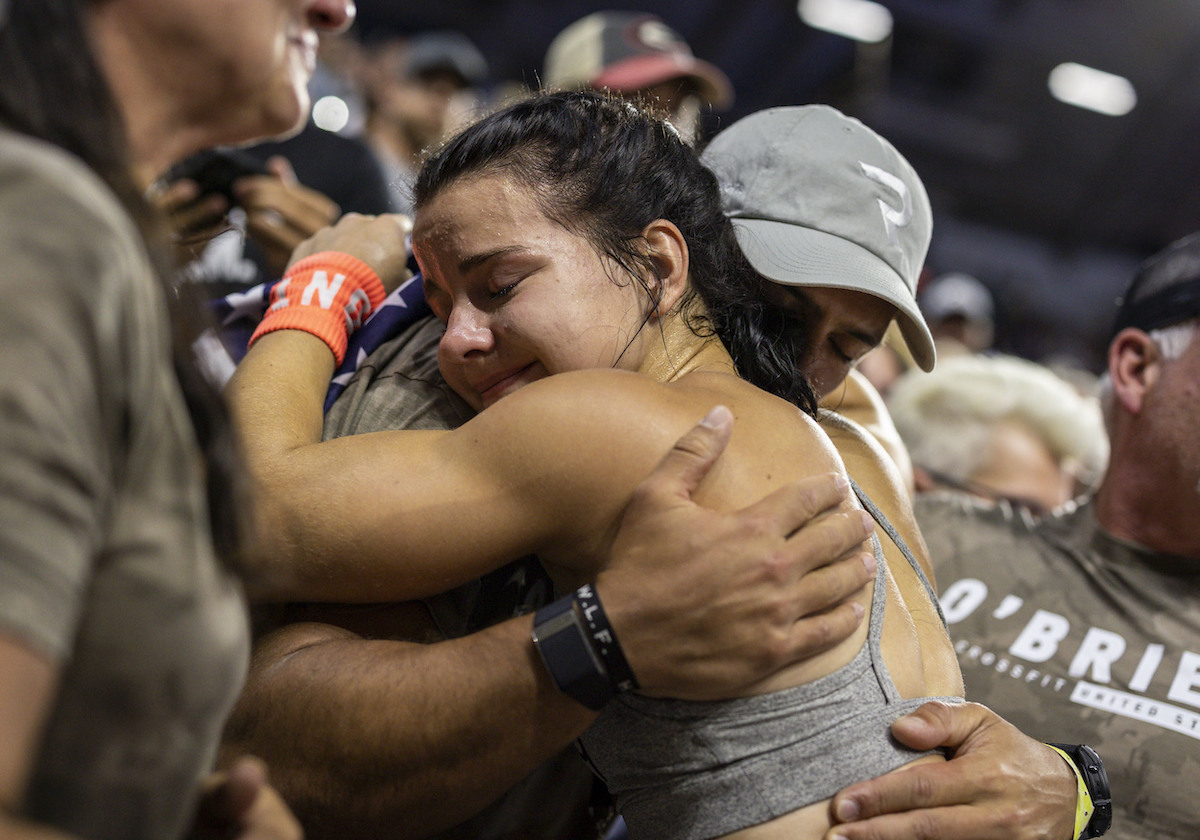 She didn’t just take the silver medal; O’Brien put up a fight against the most dominant CrossFit athlete of all time.

O’Brien wore the leader’s jersey for the first two days of competition and the world began to think she might just knock Toomey off her throne.

The Hungarian’s Return to the Podium 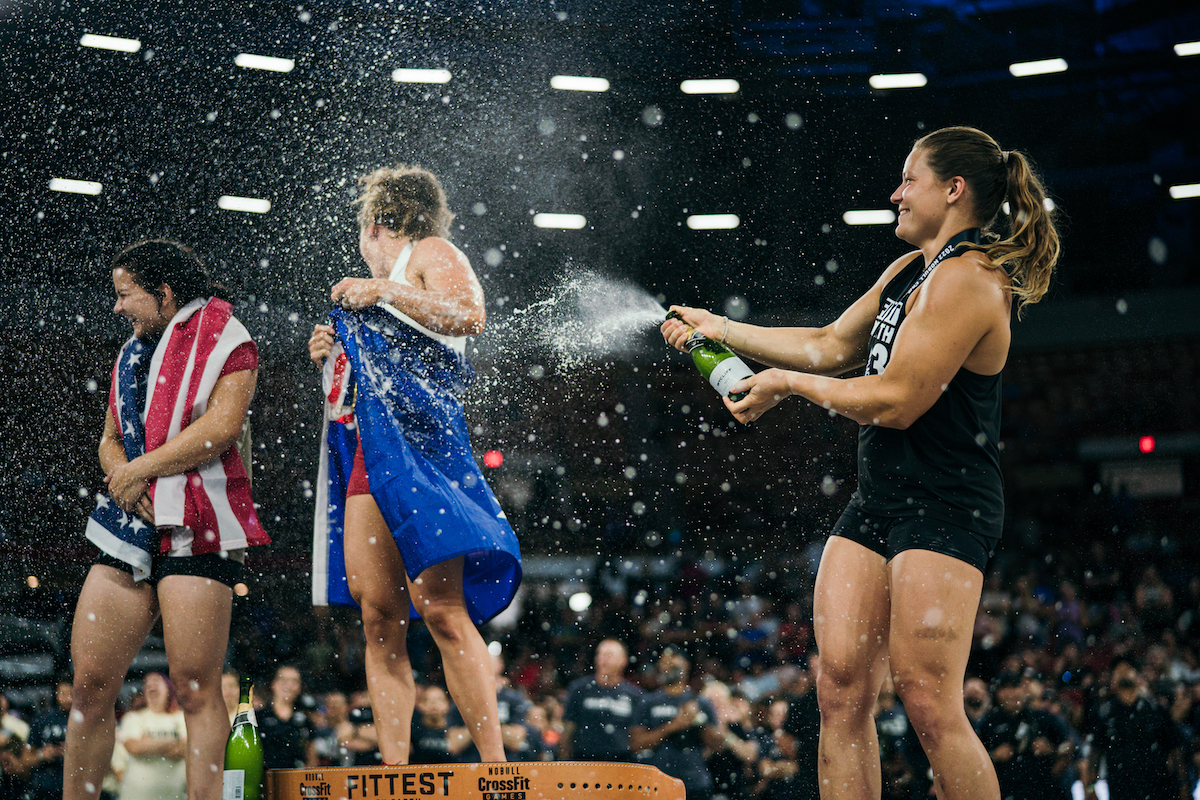 Laura Horvath during the podium ceremony | Photo by Johany Jutras

Just over a day ago, Laura Horvath sat in the 11th position on the leaderboard. Today, she wears the bronze medal around her neck, waving the Hungarian flag proudly behind her.

The four-time CrossFit Games athlete was on an expedition to the podium for a third time in her career, riding off the high of a second-place finish at the 2021 Games.

But the first few days in Madison were rocky.

The podium began to drift away.

Horvath woke up on the morning of Saturday, Aug. 6, and said, “I'm not giving up yet.” So she secured two third-place finishes on Day 4. But that wasn’t enough — there were still three events to go, and it was all or nothing.

The final day of the 2022 NOBULL CrossFit Games was met with more uncertainty. The clouds opened up and drenched the North Park, creating a blanket of precipitation that would truly test the most resilient. But nothing would rain on her parade.

While most of the field struggled on the kettlebell clean and jerks, Horvath felt no barrier. Pushing the sled the final few feet, she looked behind her to see  five-time Fittest Woman on Earth Tia-Clair Toomey still fighting with the kettlebells. Horvath pushed her sled across the finish line almost three minutes ahead of the second-place finisher.

Next up was Back Nine, and the yoke had her name written all over it. In a foot race to the finish, Horvath added yet another event win to her record.

For the second year in a row and the third time in her career, Horvath stood atop the podium, branding the title of third-fittest woman on Earth.