There is a certain magic in the Alliant Energy Center Coliseum that can be felt every time the strobe lights flash when an athlete extends their timing-chipped leg over the finish line.

There are tears of joy, heavy sighs of relief, and occasionally, a frustrated throwing of a hat or wrist wrap.

On Saturday afternoon, the 2022 NOBULL CrossFit Games came to a close for the masters divisions after three days and eight events.

In the end, there were repeat winners and first-time champions. In a field of 140 athletes across 14 divisions, there were veterans and rookies — all of which are worthy of celebration after an impressive few days of competition.

Welcome to CrossFit. These are their stories.

Below are the 2022 NOBULL CrossFit Games winners and highlights from the competition in Madison. 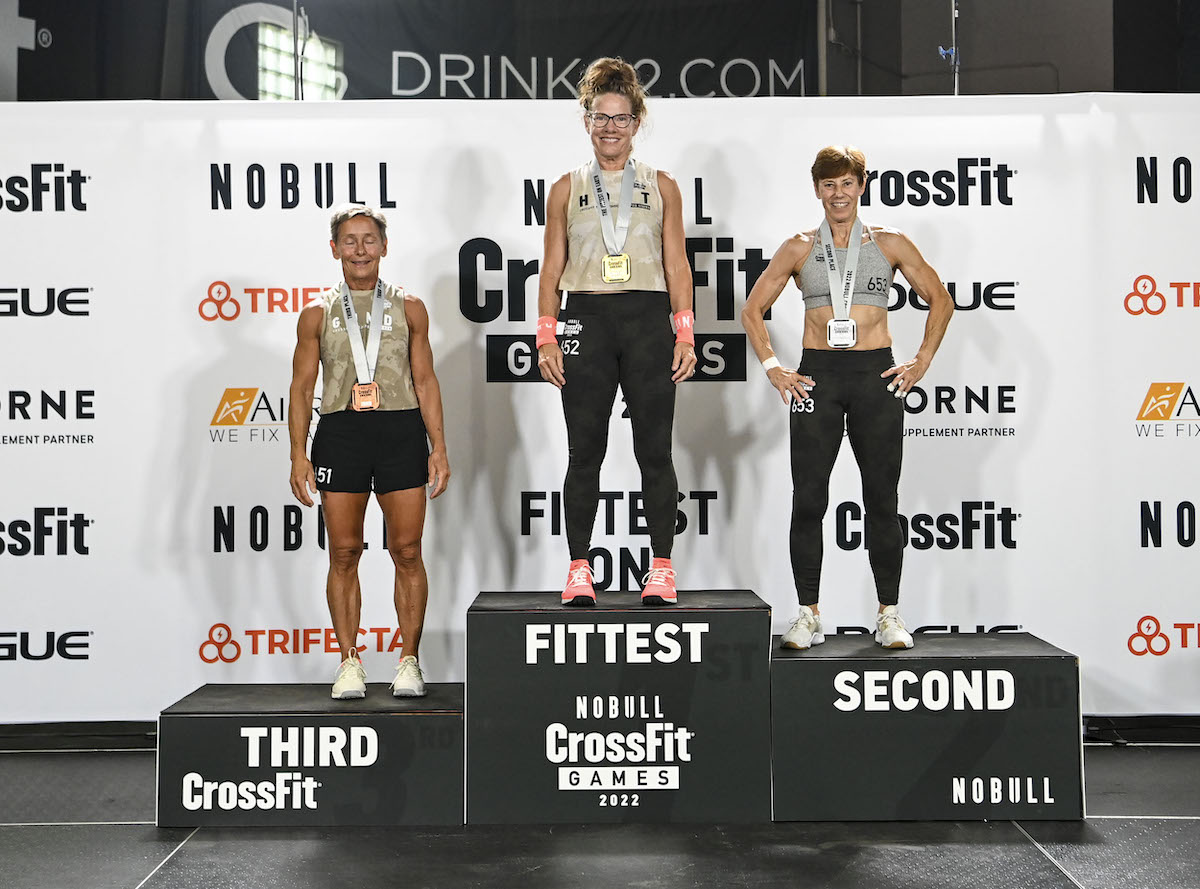 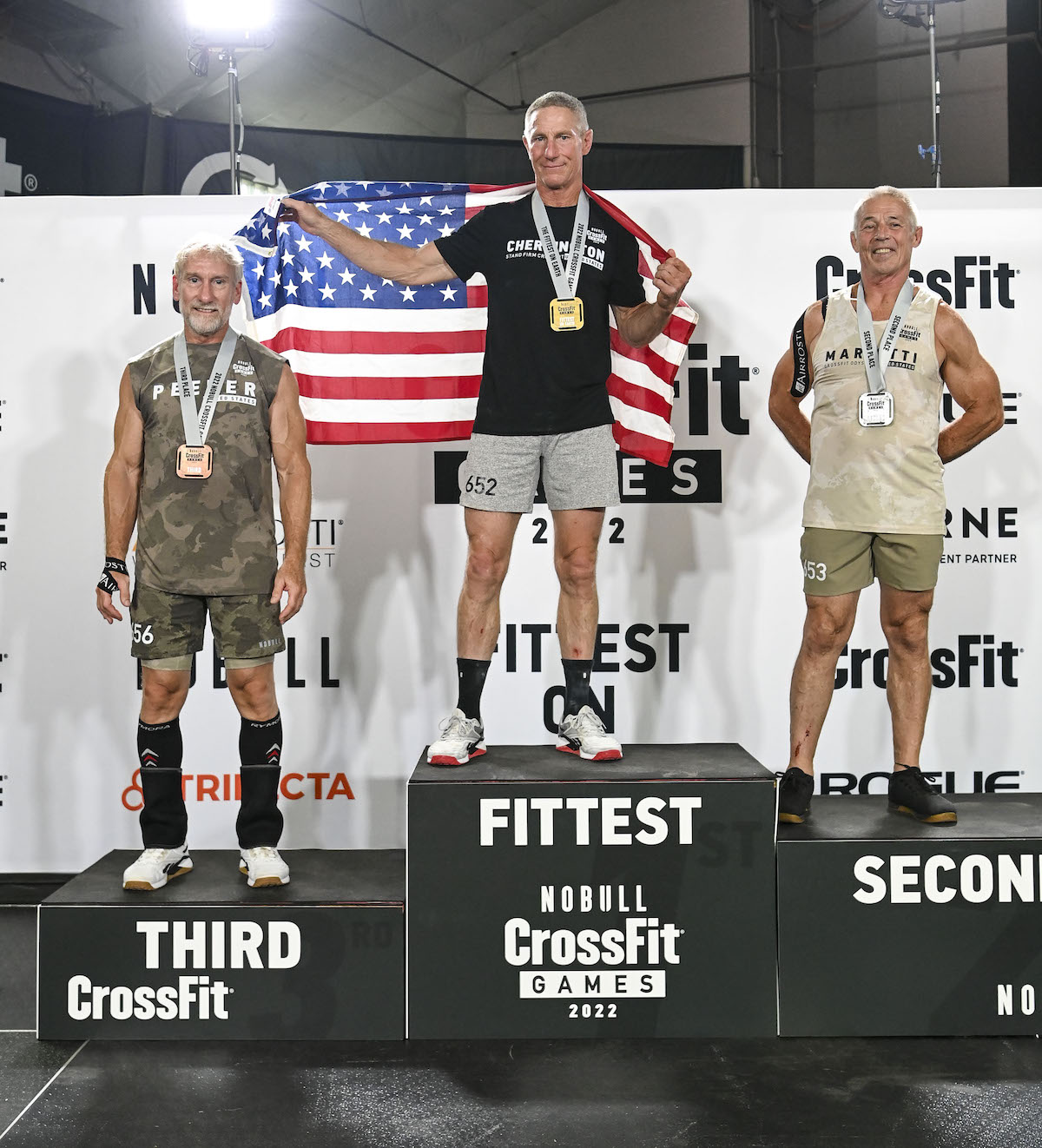 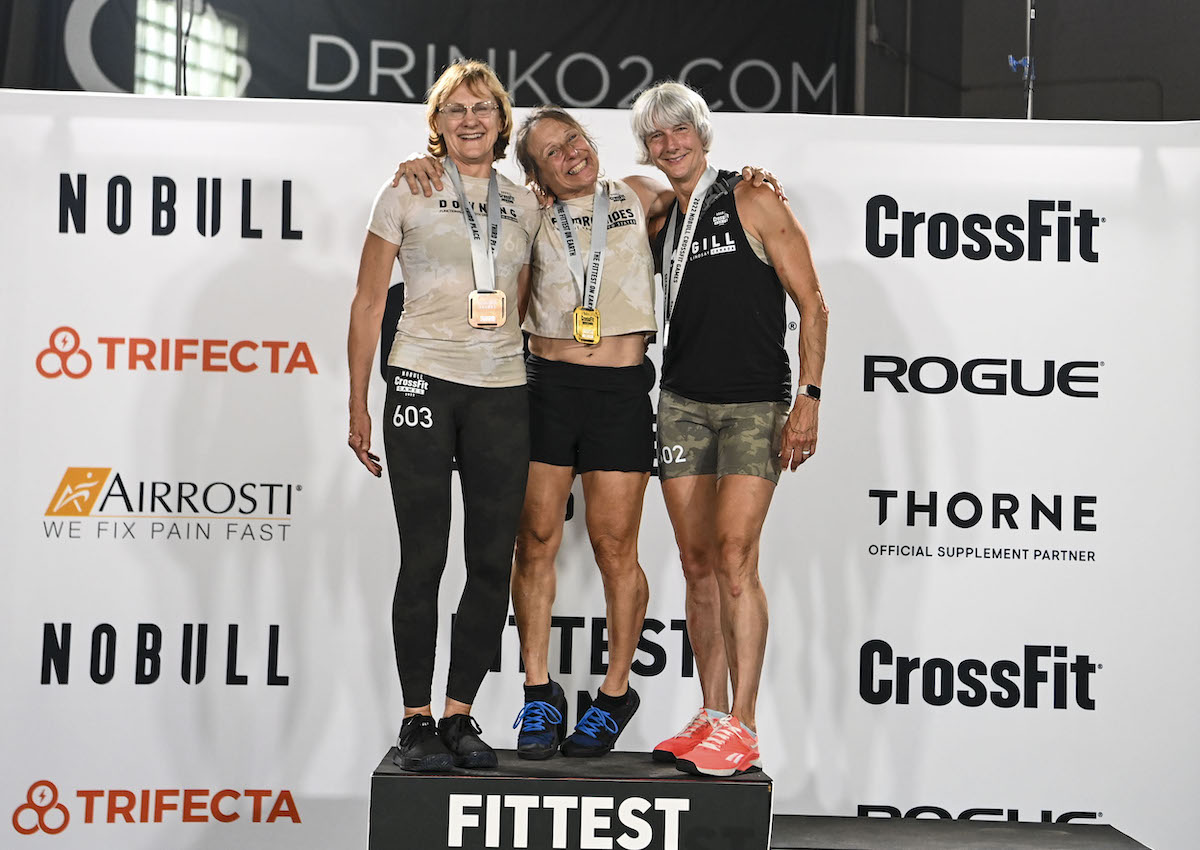 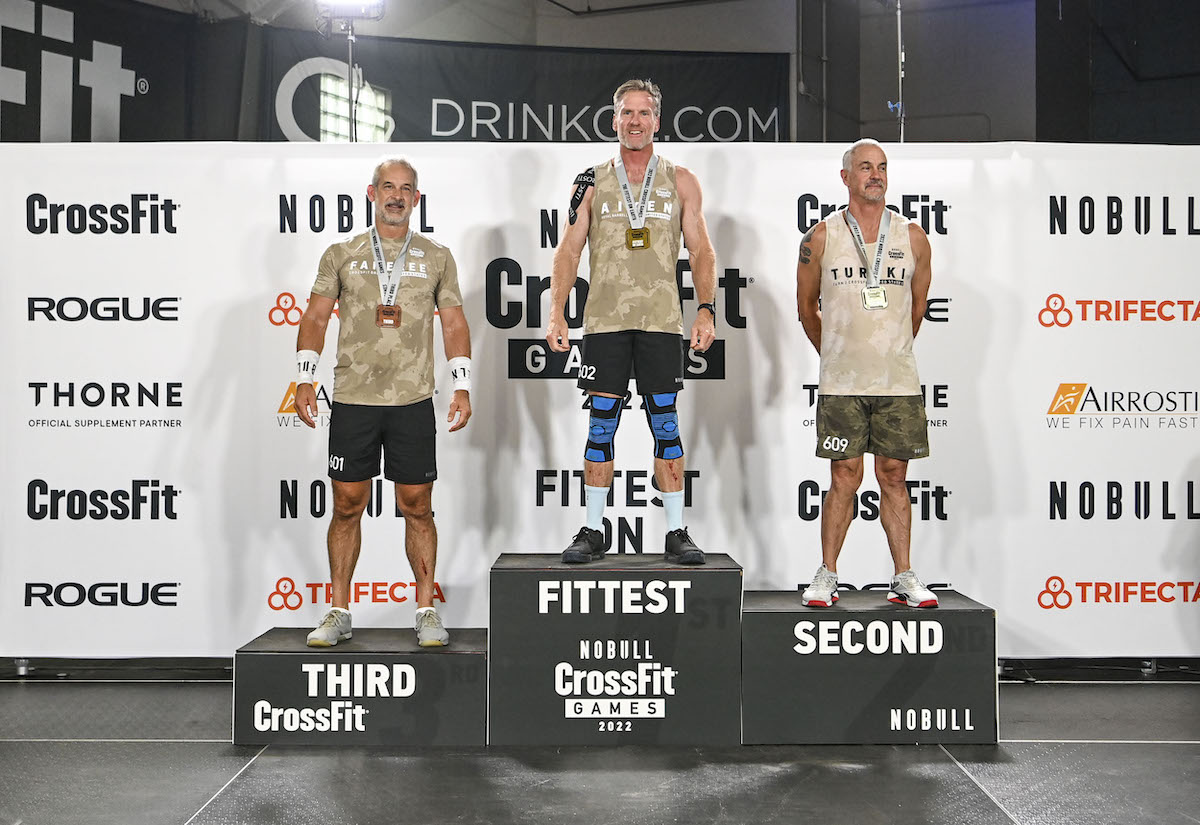 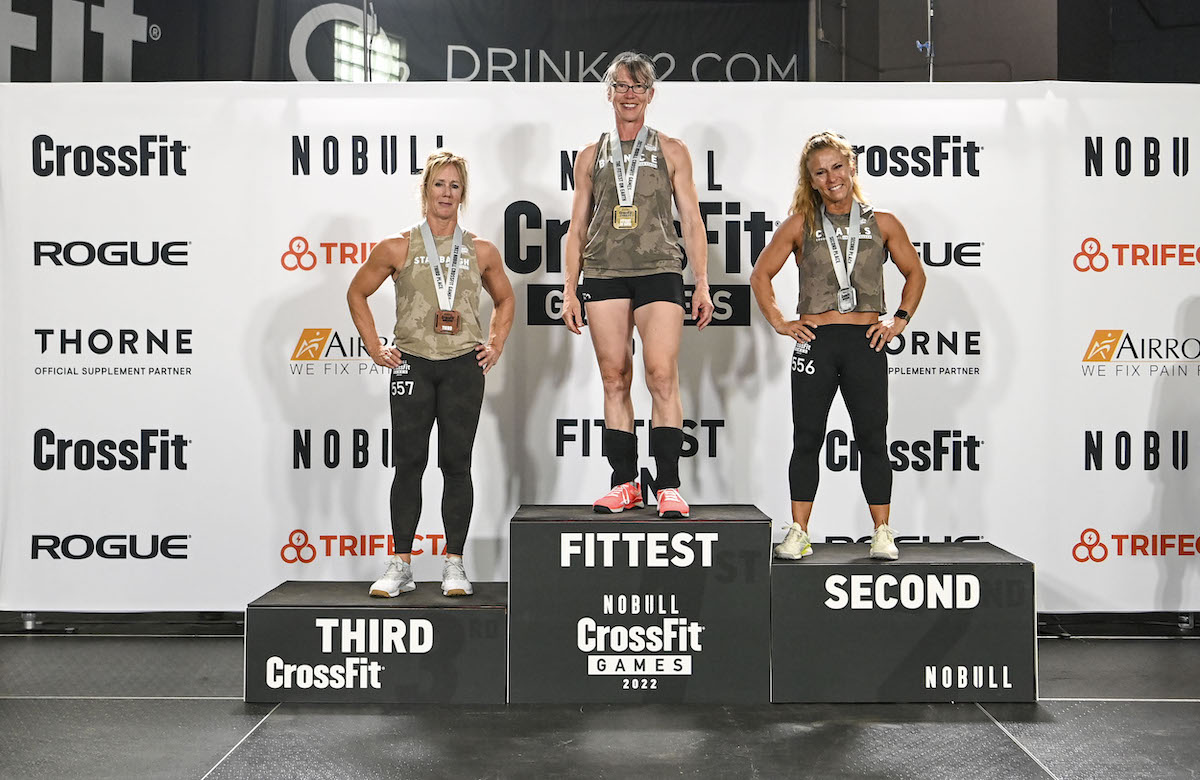 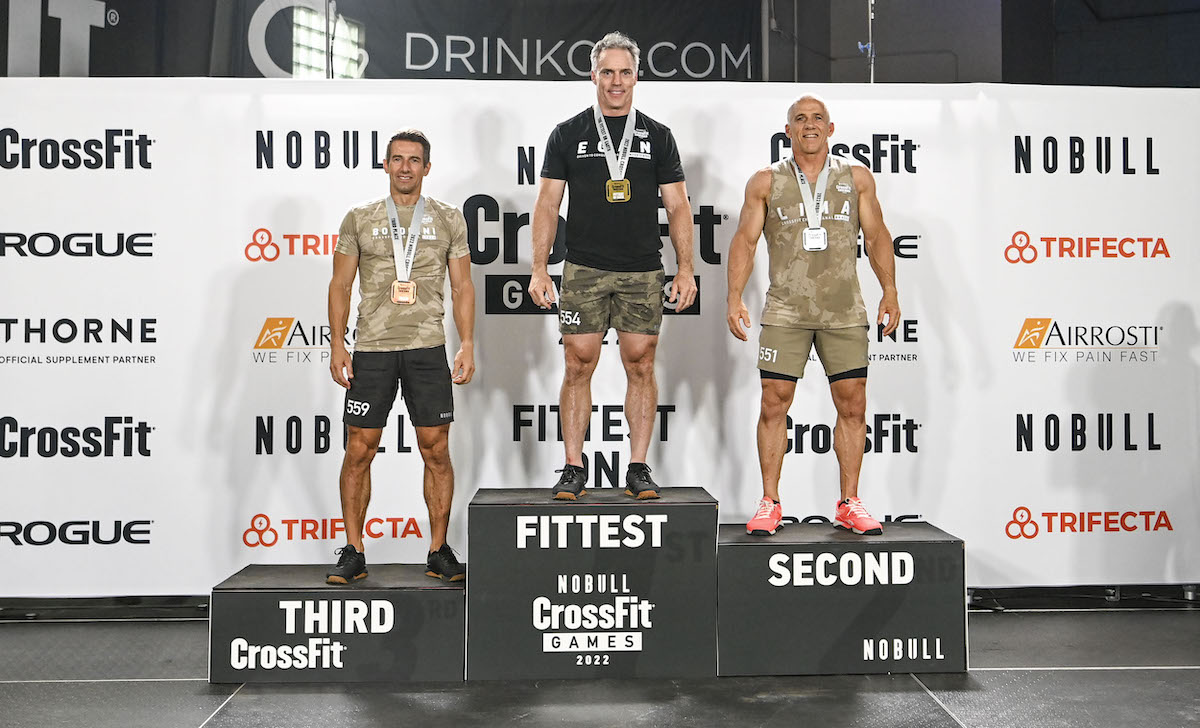 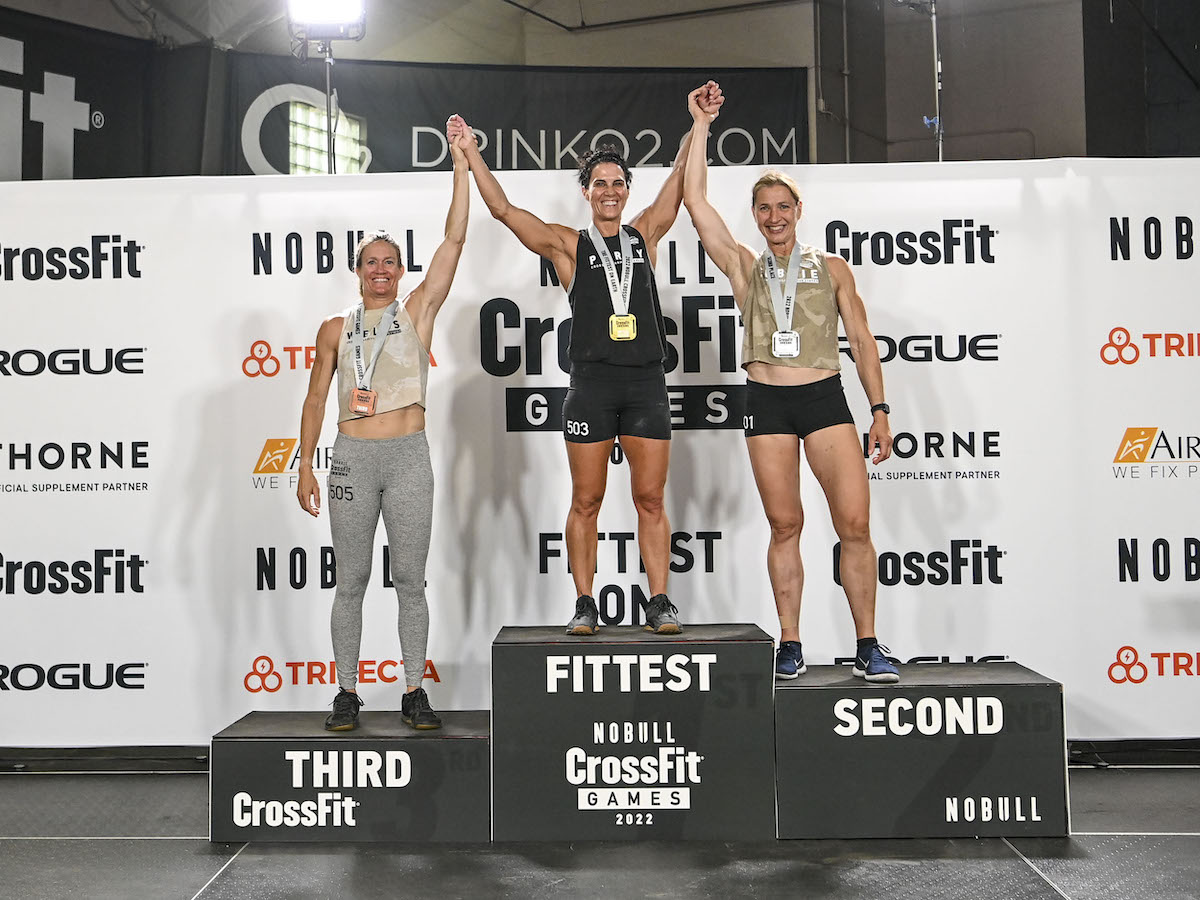 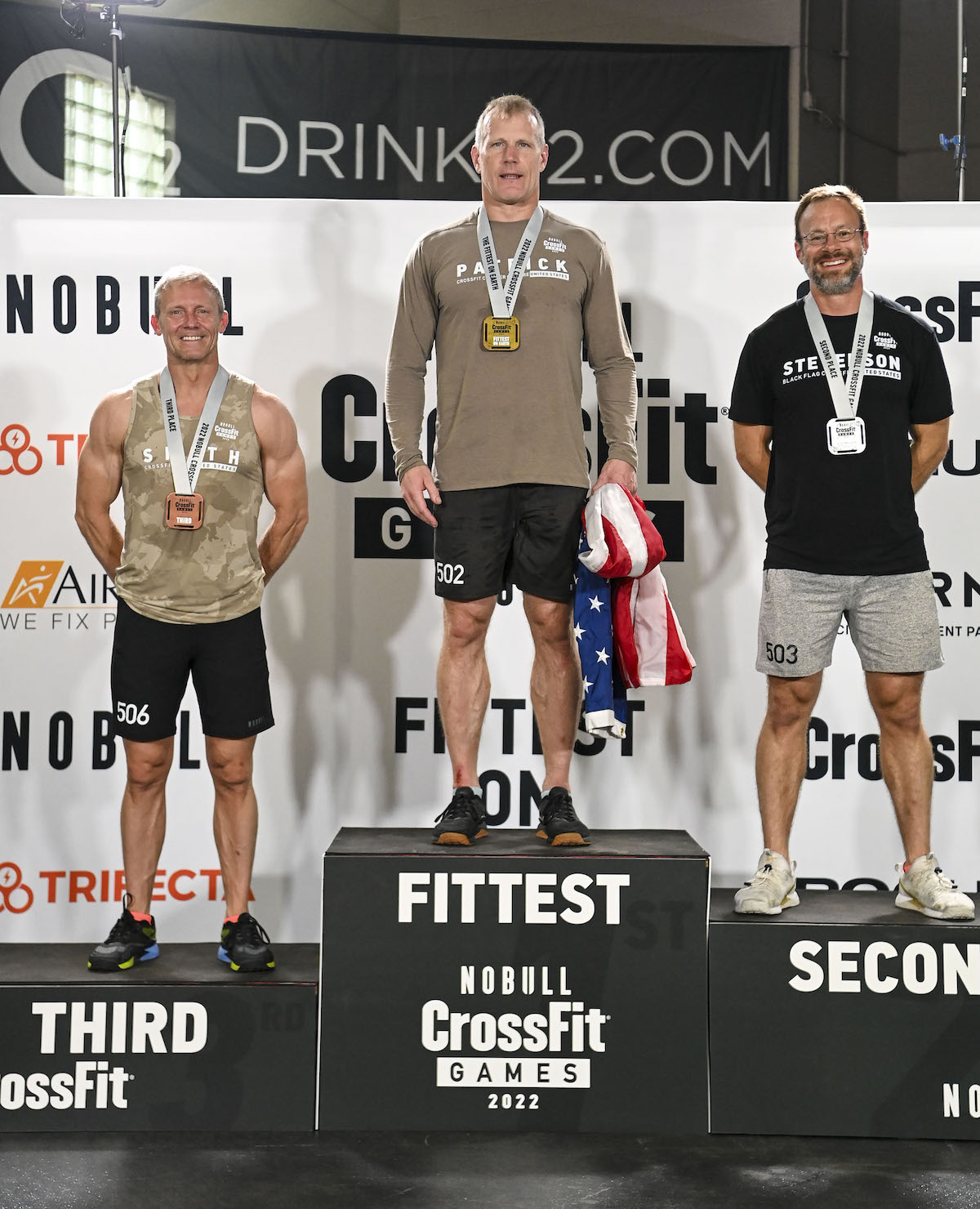 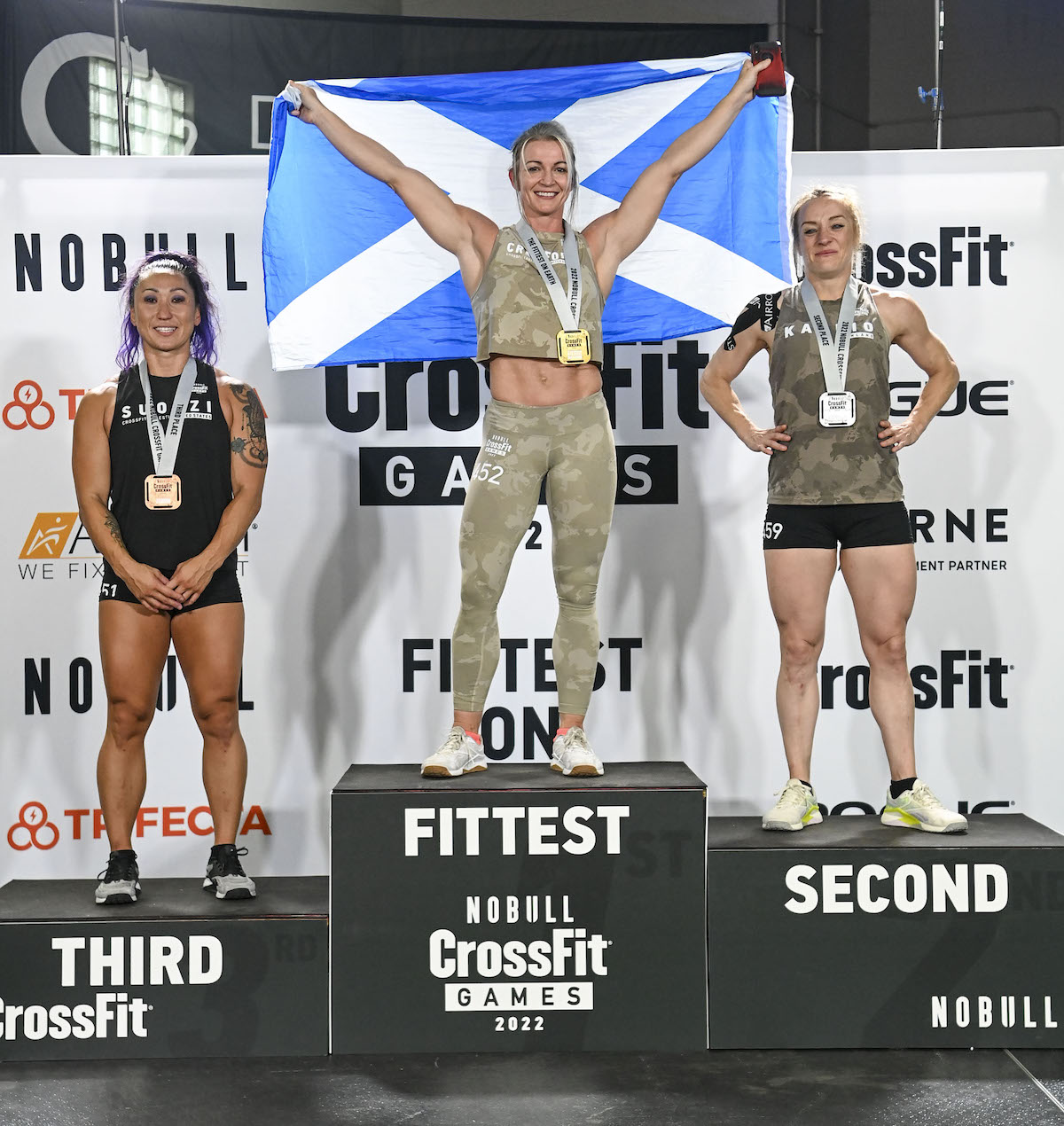 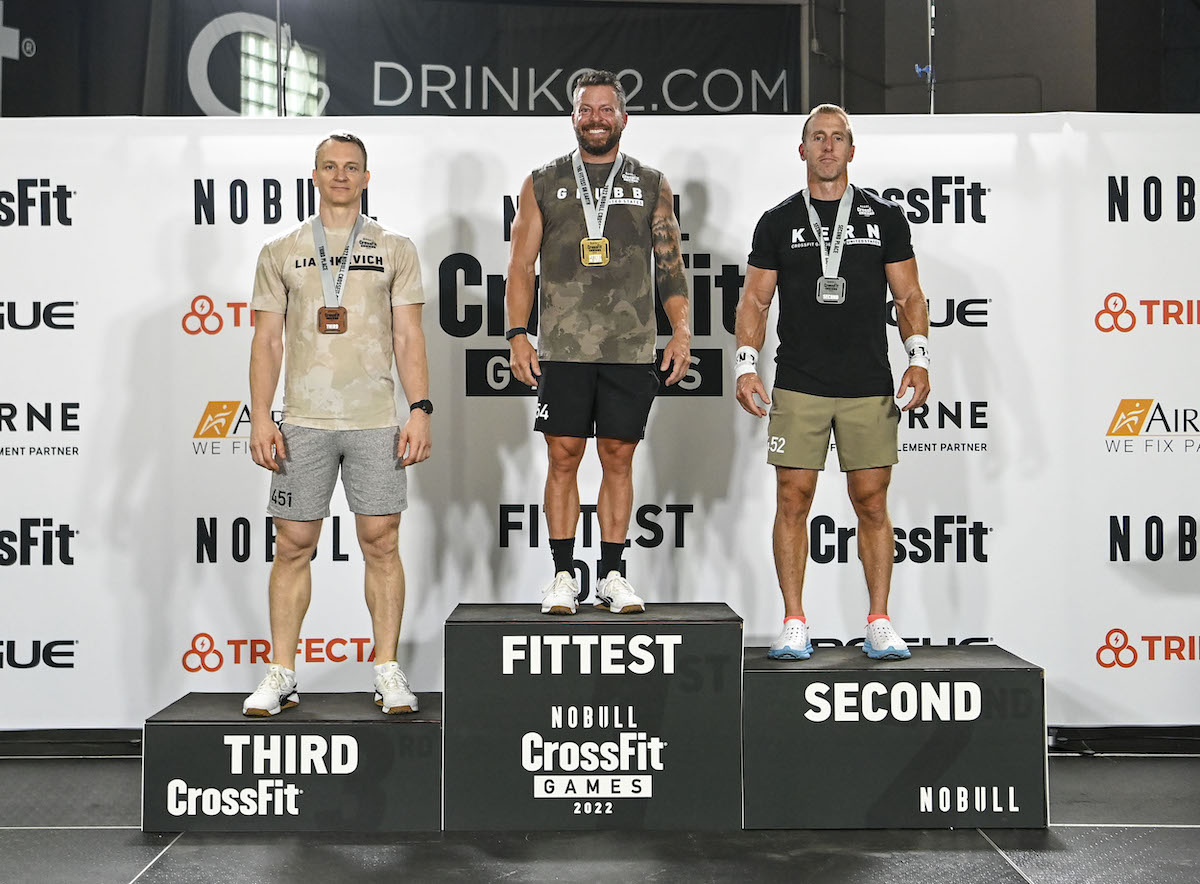 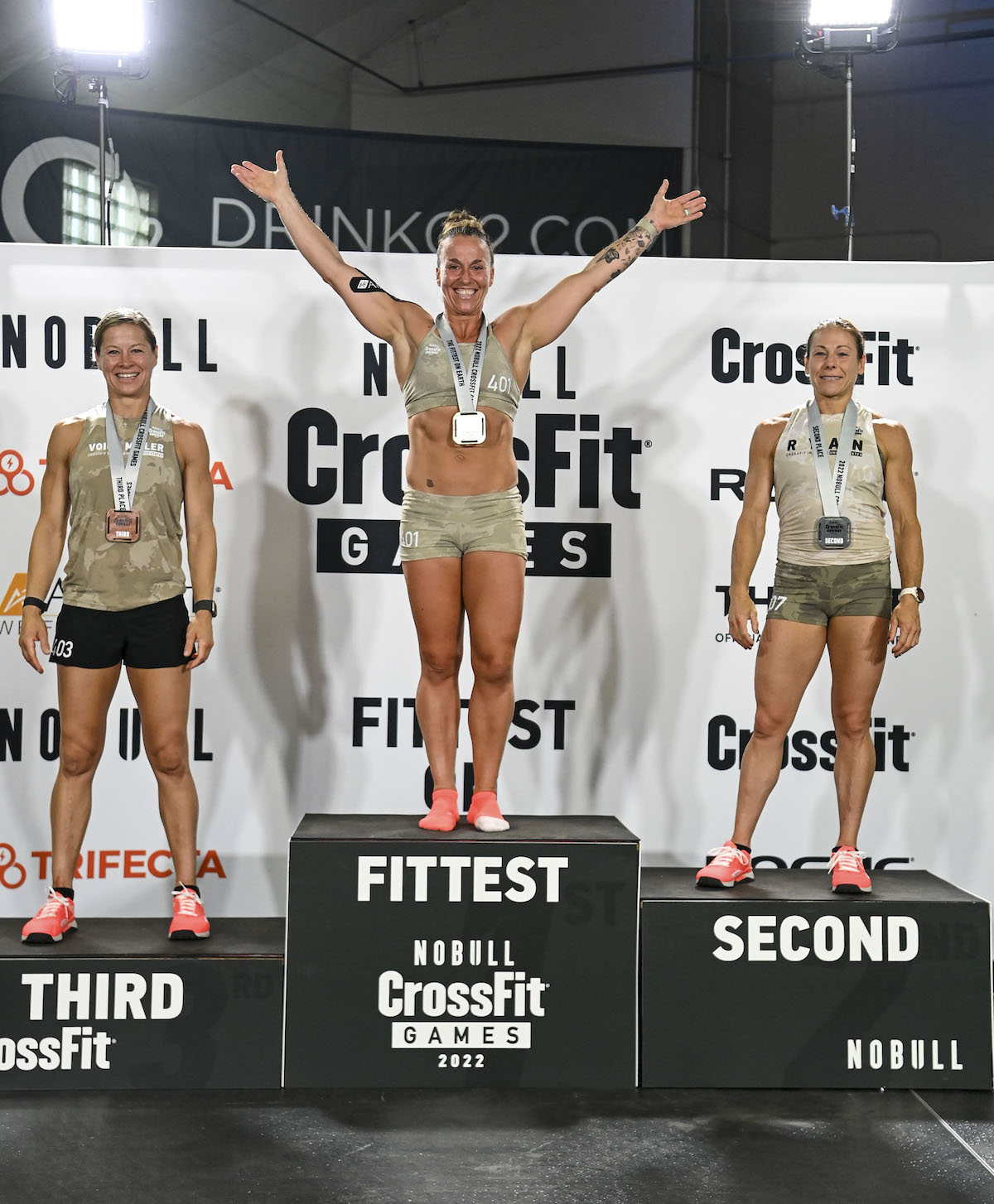 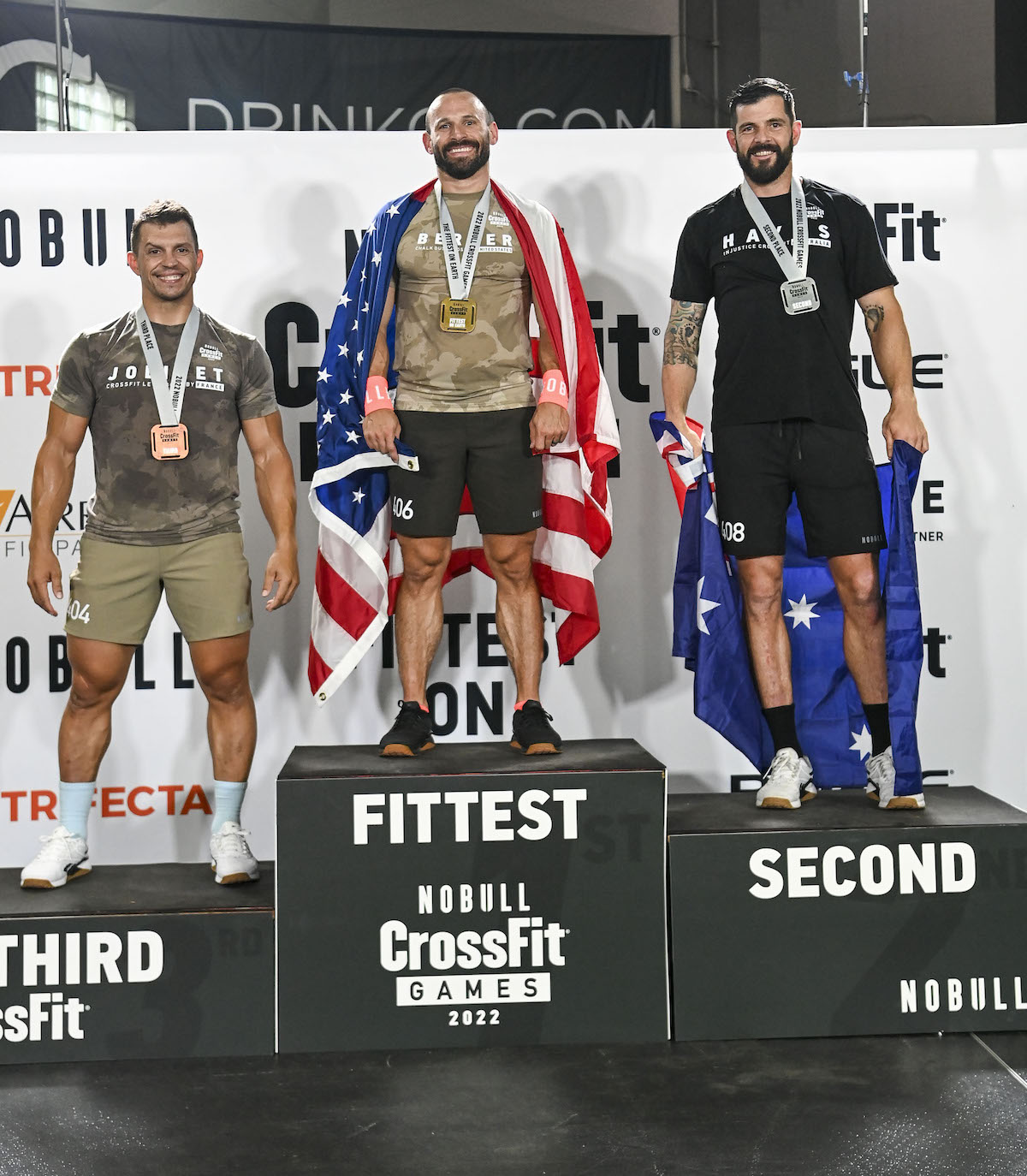 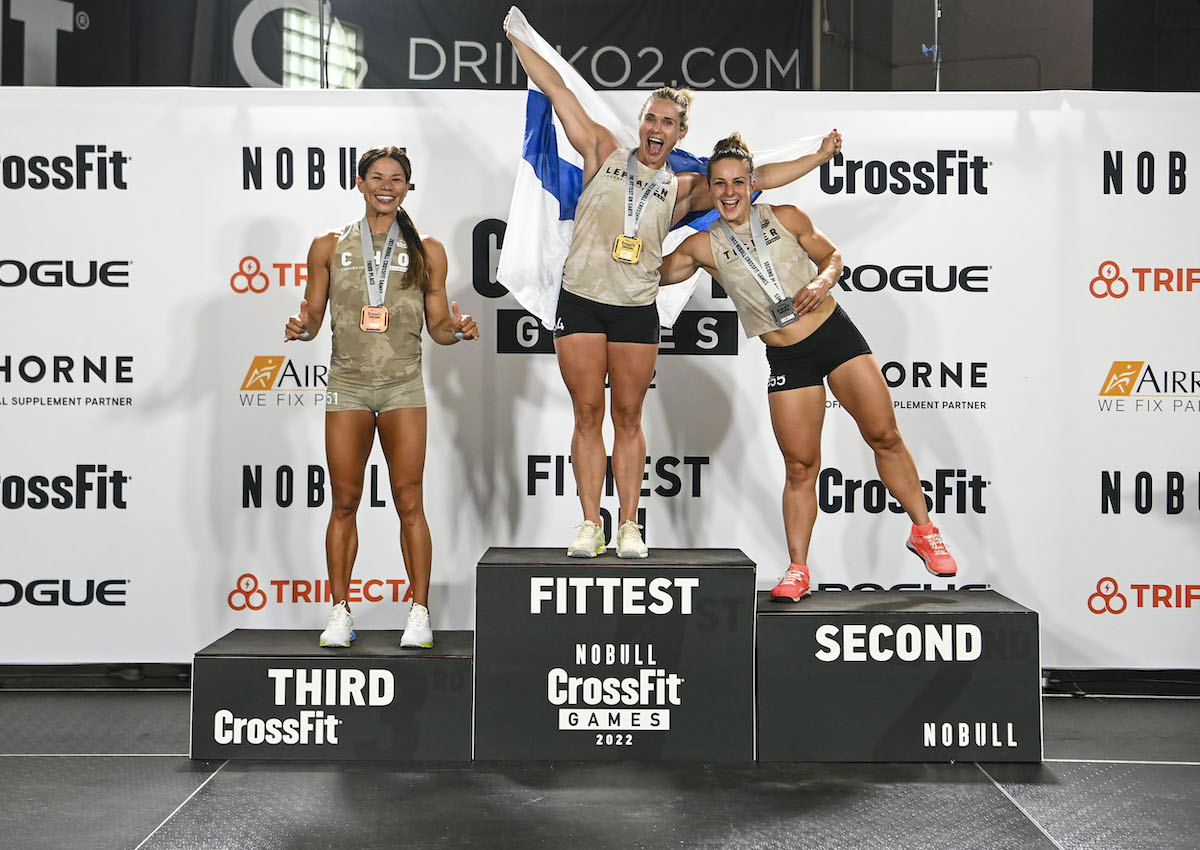 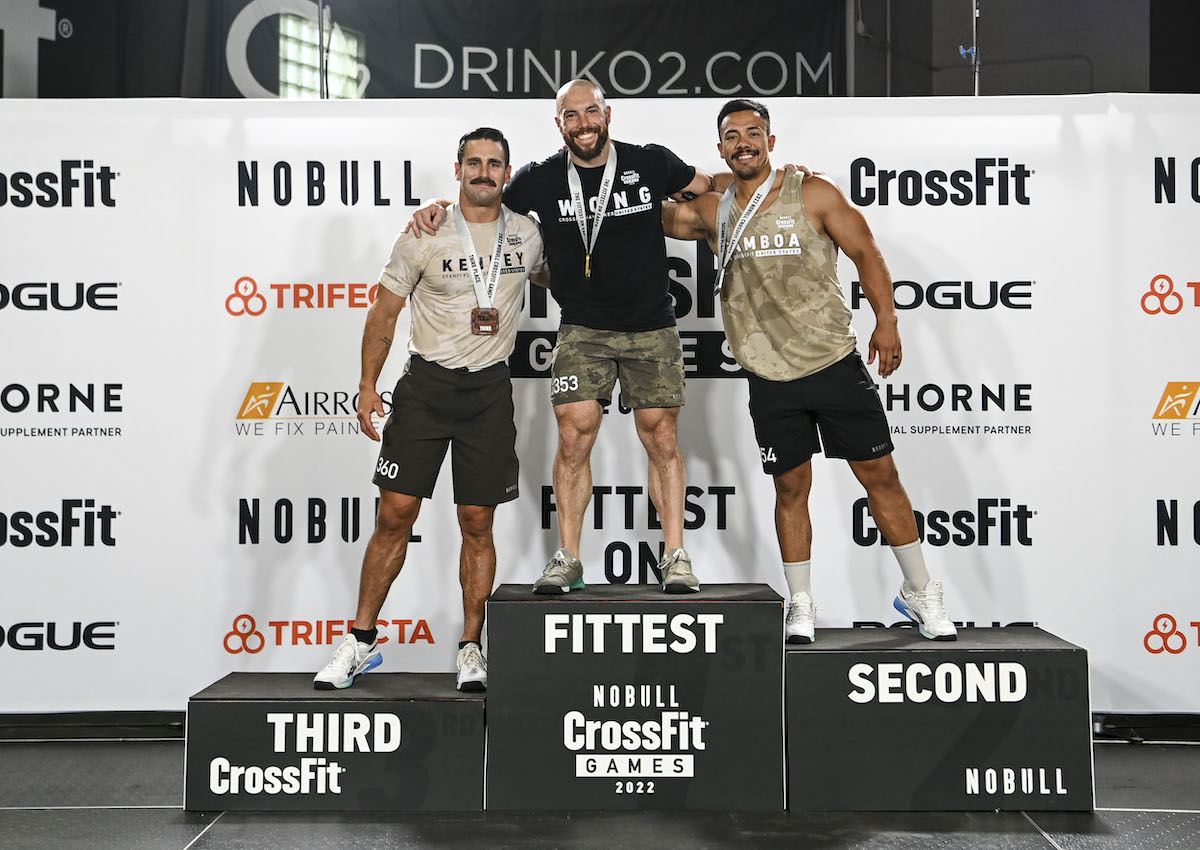 The masters division’s first taste of the Coliseum lights came in Event 2, Max Trio. For many, this was the moment they had trained all year for.

The task was potentially the most straightforward of any of the eight events. Spend five minutes accumulating calories on the Rogue Echo Bike. Next, take 15 steps forward to the rig for three minutes to find your heaviest weighted pull-up. Finally, step up to the Rogue squat stand and find a 1-rep-max front squat.

In other words, pedal hard and move heavy weights.

And it will only take 11 minutes.

The Coliseum was full of big heads and even bigger lifts. The big heads belonged to the throng of fans following around their fathers, mothers, friends, or co-workers, flapping their cardboard cutouts every time their favorite hit a big lift.

Alexandre Jolivet, a Frenchman from CrossFit Let’s Go Baby, made his fifth Games appearance since 2017 and was the first to hit a 400-lb front squat, opening the 40-44 division with a 415-lb lift and then hitting 430 lb. Justin King, a three-time Games athlete from Slingin Iron CrossFit in Walker, Louisiana, bested him by five pounds, hitting 435 lb.

Jennifer Dieter, a former collegiate diver at the University of Virginia who appeared in her seventh Games this week, opened at 195 lb in the 45-49 division and finished at 245 lb.

“I love strength work,” Dieter said afterward. “I knew I just needed to go for it. That was only five pounds off my lifetime max so I was pretty happy for sure.”

In the 65+ division, four-time Games veteran Michael Bridges opened at 275 lb, a weight no one else would even load on the bar.

“I think that was pretty good,” Bridges said with a smile after it was over.

The middle day of a three-day competition is referred to as “Moving Day” as it is a chance for leaders to widen their leads while those chasing them try to reel them in.

The masters athletes had just 20 minutes to make their move, spending a time-capped nine minutes inside the Coliseum on Parallel Elizabeth and 11 minutes outside on the North Park turf in Mixed Mode Madness.

“I like cycling the barbell, that’s obvious,” she said of seemingly cruising through 95-lb squat cleans. “The parallettes were a new movement. I was just trying to keep calm at the beginning and go faster towards the end.”

It’s unclear whether she was talking about the end of the event, which she won by more than 46 seconds, or the entire competition, as she collected two seconds and two thirds over the final four events to squeak by Aneta Tucker for a 30-point win.

In the 40-44 division, Jenn Ryan had a similar outlook on the squat cleans.

“Ninety-five (pounds) isn’t terrible, so you just try to stay unbroken and also shorten the range of motion a little, which helps me being shorter,” she said. “I put myself in position this season to not be afraid of anything and come out guns blazing on almost every workout.”

Laurie Meschishnick had five podium finishes under her belt coming into the 2022 Games. In the 55-59 division, she would be the only woman in her group to complete Parallel Elizabeth, finding her groove along the bars and finding some excitement from getting her hands on a barbell. She shared, “But you know it was good, I really just do come out and do my thing. I was really comfortable with the barbell. I was really happy to touch the barbell.”

With the finish in sight, the masters divisions began their day in North Park for Carrying Karen, moved to the pool for Rinse ‘N’ Repeat, and closed out the competition under the lights for Final Sprint.

With temperatures hovering in the mid-to-low 90s and the humidity continually rising, Carrying Karen had the highest time cap of any age-group event at 16 minutes. For many it went from an event for time to one big AMRAP.

With the sun beating down, only 21 of the 62 remaining masters men were able to complete the task under the time cap, and a whopping eight of them came from the 60-64 division. Ian Buster was one of those men, crossing the finish line in 12:53.13, which was only bested by one masters athlete across all  divisions — Sean Patrick. Patrick competed in the 50-54 division and clocked in at 12:49.89 for the win in Carrying Karen. That victory started a run of three straight event wins for Patrick, bringing him from off the podium at the start of the day to the top tier in his first Games appearance.

Carrying Karen was also a key moment for Julie Holt in the 65+ division. With a dominant event win, she earned herself a podium spot for the first time in the competition. This event win marked her pivot to winning the rest of the competition.

The final event of competition marked a victory lap for some but was a key factor to finalize the podium for others. Cal Cherrington capped off his weekend of dominant performances with a final event win in the Masters Men 65+  division, carrying the sandbag with him to the finish line.

It was a race to the finish for the women in the 60-64 division that would decide who ended on the top of the podium — in less than three minutes time. The women needed to go fast. No strategy. No breaks. Just go.

Mary Beth Prodromides and Patricia McGill were separated by just 10 points for first place, with Prodromides in the lead. McGill completed her burpees just ahead of Prodromides and flew through her sandbag-to-shoulders to lay everything out on the Coliseum floor. With an early no rep on the sandbags, Prodromides recovered and clinched first, coming in right behind McGill.

In true CrossFit fashion, the field gathered around the oldest competitor in the field to bring her home in the Final Sprint event. At the end of the event, under the Coliseum lights, Joke Dikhoff, 72, held on for her final 50-lb sandbag-to-shoulder, and sprinted to the finish, accepting cheers and hugs from her fellow competitors to celebrate a job well done.

Watch the Final Day of the Masters Competition