It has been a week since the Individual Quarterfinal leaderboard was finalized. Let’s examine the numbers to see how the inaugural Quarterfinal tests played out.

For many Quarterfinal participants, the Games season is now over, but some of the sport’s top athletes have started the Team Quarterfinal, which takes place Thursday through Sunday. Others are now in final preparations for the Semifinals, which start at the end of May. Additionally, a number of age group athletes are getting ready to take on the Age Group Online Qualifier in the first week of May. And finally, a number of elite athletes are currently on the outside of the bubble waiting to see if they get a Semifinals invite as athletes above them on the leaderboard either go team at Semifinals or simply pass on competing in the next stage of competition.

The chart below, which you may remember from my previous article, offers a breakout of Open participants on each continent along with the numbers of qualifiers possible for each continent for the remainder of the Games season. Additionally, the chart has been updated to show the number of athletes who actually participated in the Individual Quarterfinal. Note the overall participation rate for the Quarterfinal was just over half of those who qualified from the Open. It will be interesting to see if the Quarterfinal participation rates increase next season without the effects of COVID-19 restrictions. 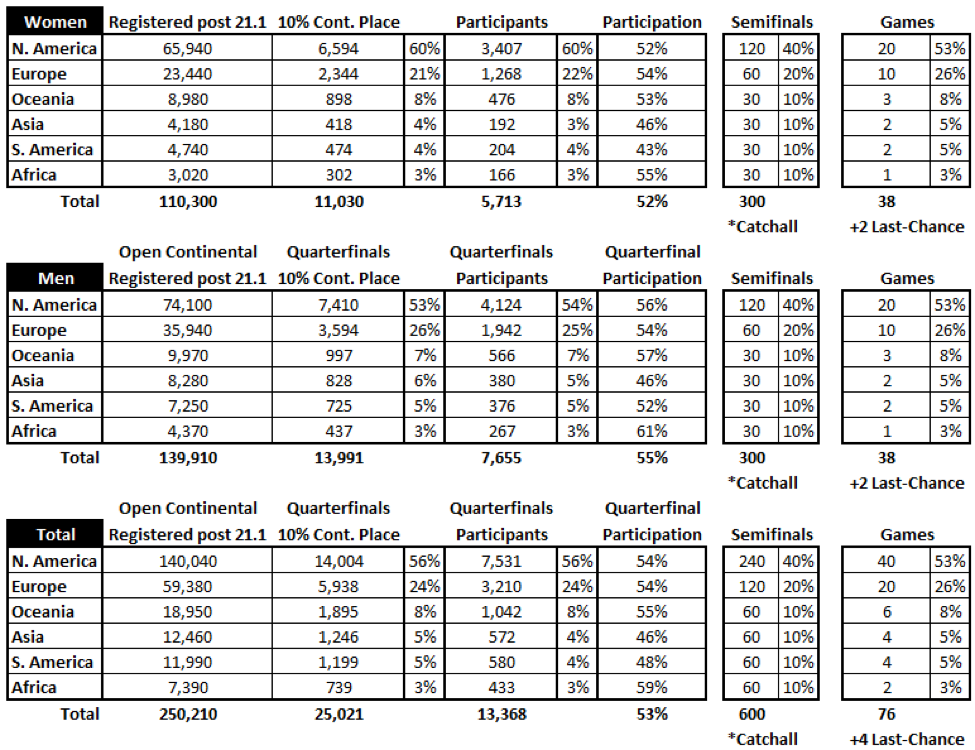 A total of 5,713 women and 7,655 men competed in at least one test in the Individual Quarterfinal. For a historical comparison, this is somewhat similar to Sectionals participation rates during the 2010 CrossFit Games season. The Sectionals in 2010 were a precursor to the Open, which started the following year. Like in the Open, anyone could sign up for Sectionals. There were 33 Sectionals leading up to 13 Regionals in 2010. Roughly two to four Sectionals served as qualifiers for each Regional.

When you look at the numbers from the 2010 and 2021 Games seasons, they are somewhat comparable. 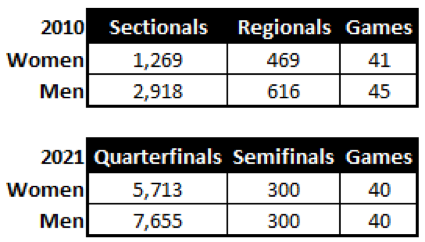 Note that in 2015, Regionals athletes were roughly halved with the consolidation of competitive regions into larger Regionals. The number of possible Semifinal participants is relatively similar to the old Regionals numbers from 2015 to 2018. Also in 2015, the Games individual fields were consolidated to 40 men and 40 women, and these numbers remained consistent through 2018. The 2021 Games individual numbers are returning to their old roots.

Quarterfinal Qualifiers and Participation by Country 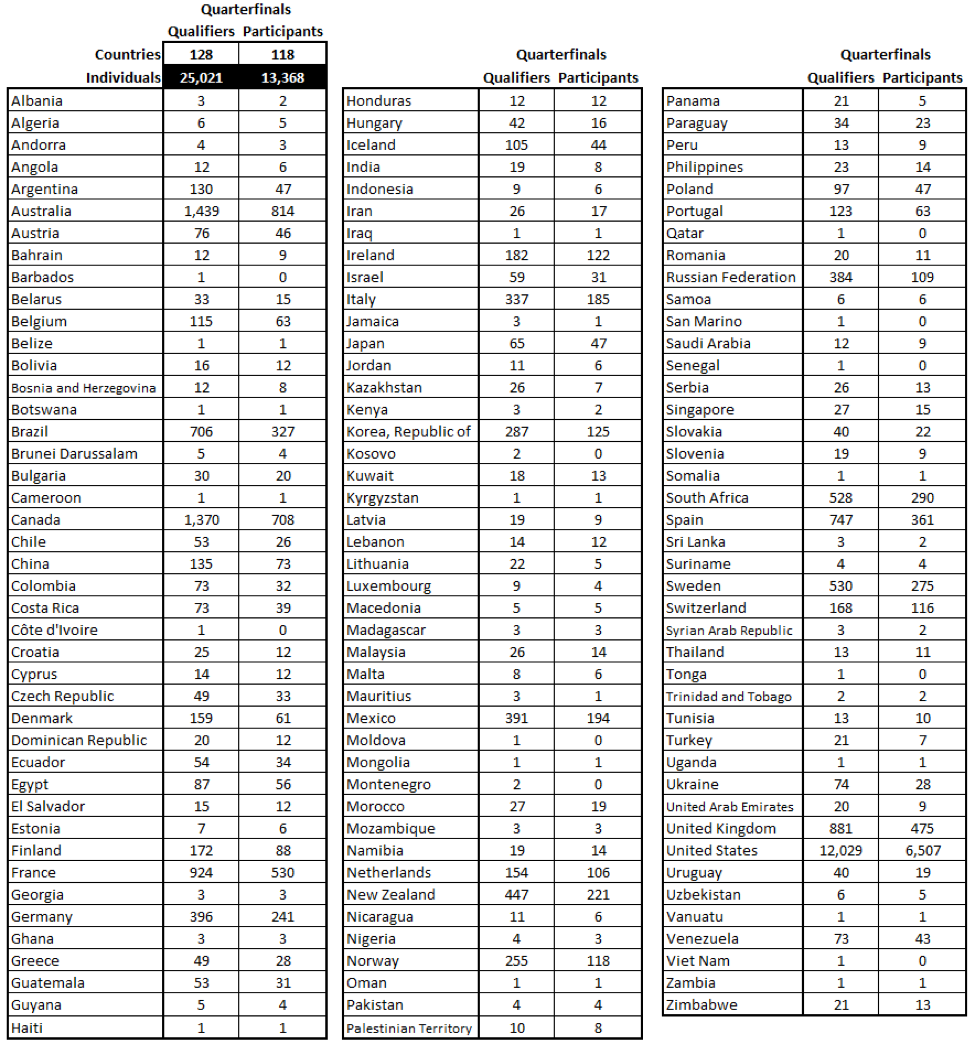 Moving on up From the Open

The Quarterfinal provided athletes with the opportunity to drastically improve upon their position from the Open. For most elite athletes, it was simple to qualify for the Quarterfinal. Additionally, an athlete’s Open placement had no bearing on their Quarterfinal scores, since all qualifiers’ scores were reset to zero. For the last two years, an athlete’s Open performance was significant as a potential direct qualifier to the Games. This season’s Open didn’t provide as much incentive for elite athletes to do really well, and it showed for some.

The top 120 athletes in North America after the Quarterfinal will be invited to advance to the Semifinals. For Europe, the top 60 advance. The top 30 in South America, Oceania, Asia, and Africa advance. 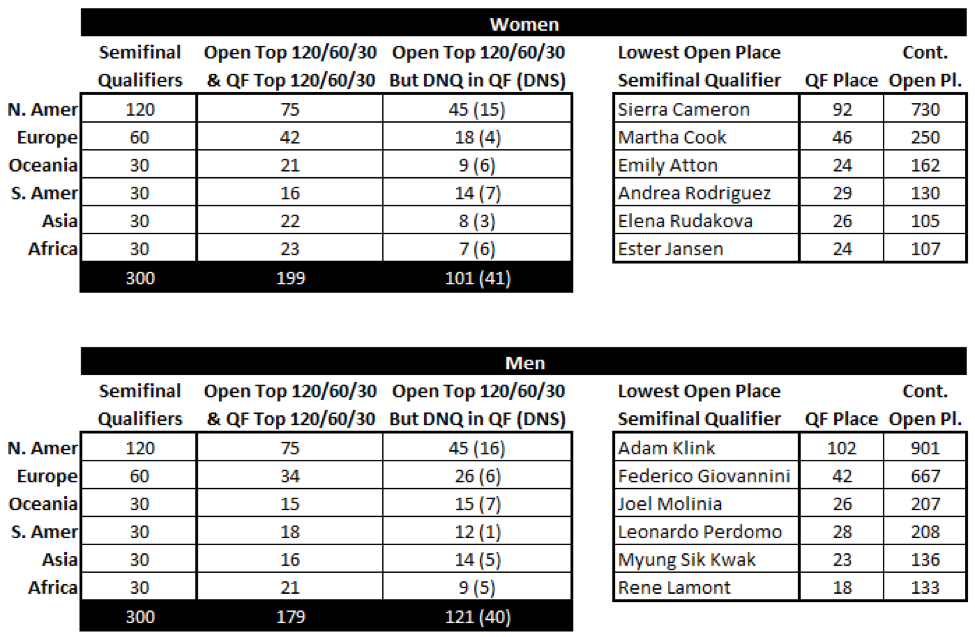